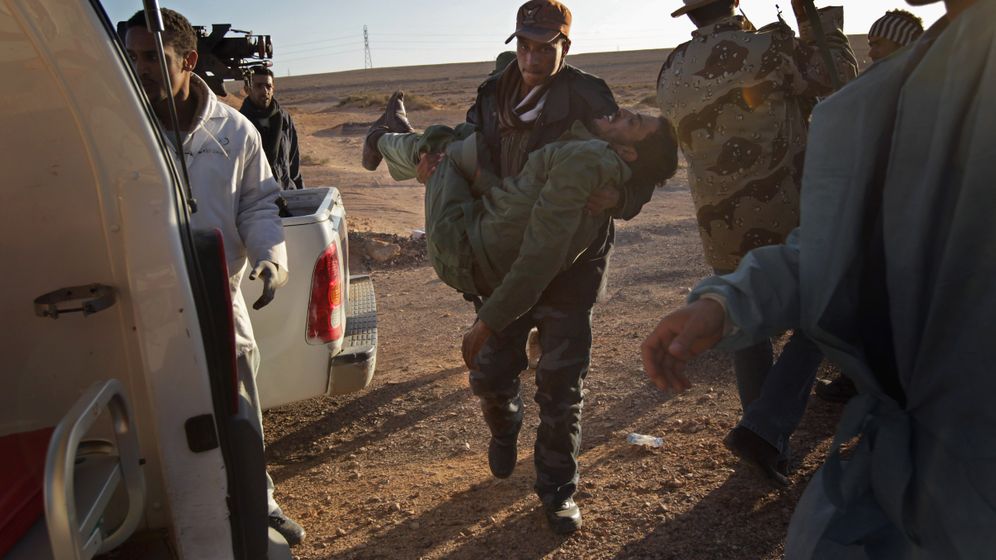 Destroyed buildings, desert battles, mounting numbers of dead and injured: Each day fresh news emerges of heavy fighting in Libya. Col. Moammar Gadhafi's troops are conducting air strikes not only on opposition fighters, but also against civilians, threatening a humanitarian catastrophe. The rebels are calling for foreign powers to impose a no-fly zone to stop the attacks. It's a debate that many governments would prefer to avoid if possible, but the longer Gadhafi dispatches his fighter jets against the rebels, the greater the pressure in Western capitals becomes for a flight ban.

That option is now being debated with increasing intensity by Arab governments, the European Union and the United States. Great Britain and France are even trying to build support for a United Nations mandate for military intervention. A draft resolution for a no-fly zone could be introduced as early as this week at the UN Security Council in New York, a diplomat in New York told the Associated Press. The Security Council is to meet on Friday after a special Libya summit with heads of EU governments in Brussels. But diplomatic sources do not believe that the EU will move this week on a no-fly zone, instead focusing on further financial sanctions against Libyans.

Before London and Paris can present thier arguments in New York, they must also win over the support of important partners including Germany, Russia and China. German diplomatic sources said that Paris and London haven't yet presented anything concrete. It could well be that veto-wielding China and Russia refuse to go along with a resolution in the Security Council. Russian Foreign Minister Sergey Lavrov has rejected the idea. "We don't see foreign intervention, (particularly) the military one, as a means of solving the crisis," he said, according to Russia's state-controlled RIA Novosti news agency. "The Libyans have to solve their problems by themselves."

'Germany Will Not Be Able to Eschew Its Responsibility'

In Germany, the start of the debate over a no-fly zone and possible German participation has been a cautious one. The first member of Chancellor Angela Merkel's coalition government to speak publicly on the issue has been Phillip Missfelder, the foreign policy expert in parliament for the conservative Christian Democratic Union (CDU). "Germany should agree to the creation of such a zone in the UN Security Council," he told SPIEGEL ONLINE. He also didn't rule out the possibility of German military participation. "If the zone is agreed to, Germany will not be able to eschew its responsibility as a member of the Security Council," he said. At the same time, Germany would only be able to make a limited contribution, he added. "Anyone pushing to become a permanent member of the Security Council, must also be prepared to take on additional responsiblity within the framework of the UN -- militarily as well." However, he added, the question remains what kind of reception the debate will get from German society given the country's difficult deployment in Afghanistan.

The German government continues to view a no-fly zone skeptically. Foreign Minister Guido Westerwelle is not generally opposed to the option, but the reserve he has shown for some days now cannot be ignored. The Foreign Ministry has stated that Westerwelle's concern is that could a no-fly zone, could spiral into a "military deployment," and the risks must be considered very carefully. Westerwelle has warned that the debate must be conducted responsibly and in a "considered" manner. The statements offer indirect evidence of a growing domestic policy discussion.

In recent days, Westerwelle provided a solid image of what might be required. The Libyan's air defenses would have to be neutralized. "That would require a military intervention that would have considerable consequences," he said. "That's why it could only be considered if the United Nations mandated it and if the region expressly wants this." Westerwelle, who is also Merkel's deputy chancellor, said the Arab League must also expressly agree to a no-fly zone.

The body has considered the possibility of imposing its own no-fly zone in recent days, with the aid of the African Union, but that has been viewed largely as a symbolic gesture. In the past, the Arab League hasn't exactly been known for its effectiveness or might. Still, the West can't afford to ignore its position on the issue given the newfound self-confidence in the Arab World. Arab League spokesman Hesham Youssef told the Associated Press on Monday, without implying blanket support, that a no-fly zone "is something we do not object to."

Nevertheless, Westerwelle is concerned that an intervention by the US and its Western allies might give backing to a Gadhafi propaganda line that has so far found little traction -- that the insurgency is being driven by the West.

The head of the opposition Green Party in parliament, Jürgen Tritten, also called for level-headedness in the debate over a no-fly zone. "This is not a harmless affair," Jürgen Trittin told SPIEGEL ONLINE in an interview published on Tuesday. "The precondition for it would be massive air strikes to eliminate Libya's air defenses." Tritten warned: "Anyone who desires such an air war in Libya would be well advised to consider consequences, including all the collateral damage."

US President Barack Obama has so far appeared to be listening primarily to the skeptics. In recent days, the Pentagon has issued clear warnings about the risks of an intervention. US Defense Secretary Robert Gates has noted that "a no-fly zone begins with an attack on Libya to destroy the air defenses" before any regular patrols could take place. Airports would also have to be bombed, he said, to render their runways unusable. And the Pentagon is seeking to avoid creating any new battle fronts in the Middle East. The US troops are already overburdened and the military has identified no clear national interest for Washington in Libya.

"It would be premature to send a bunch of weapons to a post office box in eastern Libya," White House spokesman Jay Carney said in Washington on Monday. But Washington hasn't ruled out the possibility of weapons deliveries, and Obama himself on Monday said the "violence that's been taking place and perpetrated by the government in Libya" was "unacceptable." He said, "we send a very clear message to the Libyan people that we will stand with them in the face of unwarranted violence."

'It's a Complex Situation'

Another question being asked in Western capitals is a practical one: What use is a no-fly zone and patrols over Libyan airspace if Gadhafi can stamp out the opposition with ground troops alone? Should jets fly above as a massacre is conducted below? "It is a very complex situation," government sources in Berlin told SPIEGEL ONLINE.

In Washington, a powerful alliance of senators has formed demanding that Obama make a more concerted effort in North Africa. Former Presidential candidates John Kerry and John McCain as well as former vice presidential candidate Joseph Lieberman have all issued pleas for a flight ban. "We have to try and help those who are offering an alternative future to Libya," Lieberman said. Democrat Kerry, chairman of the Senate Foreign Relations Committee and also a man who enjoys great respect in Obama's party, has called for the bombing of Libya's airports. And McCain has been beating the drum for an intervention on behalf of the Republicans.

Their argument for helping the rebels is that any successor government would be better than the Gadhafi regime. Kerry and Co. have also pointed out how the US looked the other way as mass murder was committed in the 1990s in Rwanda and Bosnia -- events that remain open wounds in US foreign policy today.

Meanwhile, NATO is also making the first preparations for a possible flight ban. On Monday, NATO General Secretary Anders Fogh Rasmussen reiterated that the alliance would only take responsibility for a no-fly zone if the UN issued a request. But he added that NATO and the international community could not "stand by" if Gadhafi persists.

"If these systematic attacks against the Libyan people continue," he told a press conference ahead of a two-day conference of NATO's 28 defense ministers on Thursday and Friday, "it may amount to crimes against humanity. Then, many people around the world would be tempted to do something to prevent this massacre."

He cautioned that a no-fly zone would be a comprehensive measure that would demand the deployment of considerable military resources. But he has asked military officials within the alliance to "conduct prudent planning for any eventuality," he said.

NATO has already started around-the-clock monitoring of Libyan air space using AWACS reconnaissance aircraft, the US ambassador to NATO, Ivo Daalder, said. Previously, AWACS aircraft had only been deployed in the area for 10 hours each day.

On Monday, the EU dispatched a team of diplomats to Libya under the leadership of Italian crisis minister Agostino Miozzo on a fact-finding mission to prepare for a special summit this Friday. The team is expected to report back on the country's humanitarian and evacuation needs. Miozzo said that approximately 1,300 Europeans are still believed to be in Libya.