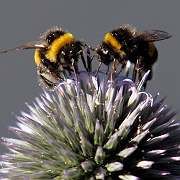 Is your phone fatally confusing to bees?

Journalists as well as technophobes have wondered for years if there was something wrong with mobile phones. A nagging suspicion that they just can't be healthy has twisted more than one finding about their effects into popular myths. Last January, for example, a German newspaper cited a new study in a breathless article on the supposed higher risk of brain tumors from mobile-phone use -- something the authors of the study never found.

Now the British Independent has reported -- to scandalous effect -- about mobile-phone radiation and its effect on bees. "A limited study ... has found that bees refuse to return to their hives when mobile phones are placed nearby," wrote The Independent on Saturday, suggesting that mobile phones may therefore be responsible -- at least a little -- for the massive death of bees.

No one doubts the phenomenon: Bees really are dying en masse. Populations have collapsed by up to 70 percent in the last several months on the American east coast. Beekeepers and scientists even have a name for the phenomenon -- "Colony Collapse Disorder." The German Beekeepers Association (Berufs und Erwerbs Imkerbunds, or DBIB) estimates the collapse across Germany at about 25 percent. But why is it happening? The Independent based its mobile-phone theory on a paper by German researchers at the University of Koblenz-Landau.

Physicist Jochen Kuhn and his colleagues in Landau have studied the influence of high-frequency radiation on bee populations for years. In two pilot studies -- the latest one came out in 2006 -- the researchers just wanted to learn if there was any potentially bad effect at all. They arrived at a cautious conclusion, namely that bees exposed to strong radiation had a harder time flying back to their hives than unexposed bees. "Honeycomb area and mass showed a disadvantageous trend for the radiated bees," said Kuhn in an interview with SPIEGEL ONLINE, "with no statistical significance."

High-frequency radiation? Electromagnetic waves emitted by mobile-phone towers are high-frequency radiation. But that alone can't explain the bee deaths, because Kuhn's team used a base station for DECT telephones as a radiation source -- and DECT (Digital Enhanced Cordless Telecommunications) signals are used for cordless phones at home, not for mobile phones. "DECT and GSM (for mobile phones) use a number of different frequencies and a number of different modulation- and pulse-processes," Kuhn says. "We still don't know whether these (signals) have even a potential effect on bees. And, if they do, we don't know which ones."

Other signal protocols like GSM and UMTS still have to be studied. DECT was just easy to use for the pilot studies because a broadcast station was easy to find and inexpensive. "Our intention wasn't to explain the massive bee deaths, which in any case started after our research started," says Kuhn. The pilot studies only looked at the fundamental question of whether high-frequency fields could influence bees' learning behavior.

Even the setup of the experiment should discourage hasty conclusions: The experimental DECT base station was placed in the beehive, and the insects received an extreme dose of radiation that would be nearly impossible to find in nature. "We started with maximum strength to see if there would be any effect at all," said Kuhn.

The debate over the causes of bee deaths on both sides of the Atlantic has focused on a number of suspects:

Jürgen Tautz, a bee researcher at the University of Würzburg, is sceptical about the mobile-phone theory but still calls it "worth researching." It's known, he says, that honeybees are "react with extreme sensitivity to changes in the earth's magnetic field." Tautz plans to let a working group he's organized study the question of whether some unpleasant interaction might exist between radio networks and honeycombs.

But bees are in danger, Tautz said to SPIEGEL ONLINE. Their range of food has narrowed; in the meantime the climate has warmed and genetically modified foods have become part of their daily environment. Mobile-phone radiation could be one of the many new stress factors that bees have to contend with, he says. "But I'm sure mobile-phone signals would have no effect on a healthy, unstressed bee population."

But it's still a matter of debate whether the bees are healthy and unstressed. Professional beekeepers have warned for years about rising problems in their colonies:

Another explanation -- one not unknown among apiarists -- may be even more important. Tautz believes that intensive beekeeping may itself be one of the main problems. Raising dense colonies of bees narrows the genetic pool for a population, and less genetic variation weakens any species. In Turkey, where bees haven't been cultivated as intensely as they have in Germany, for example, mass deaths like the ones observed now in Europe and the United States would be unimaginable.