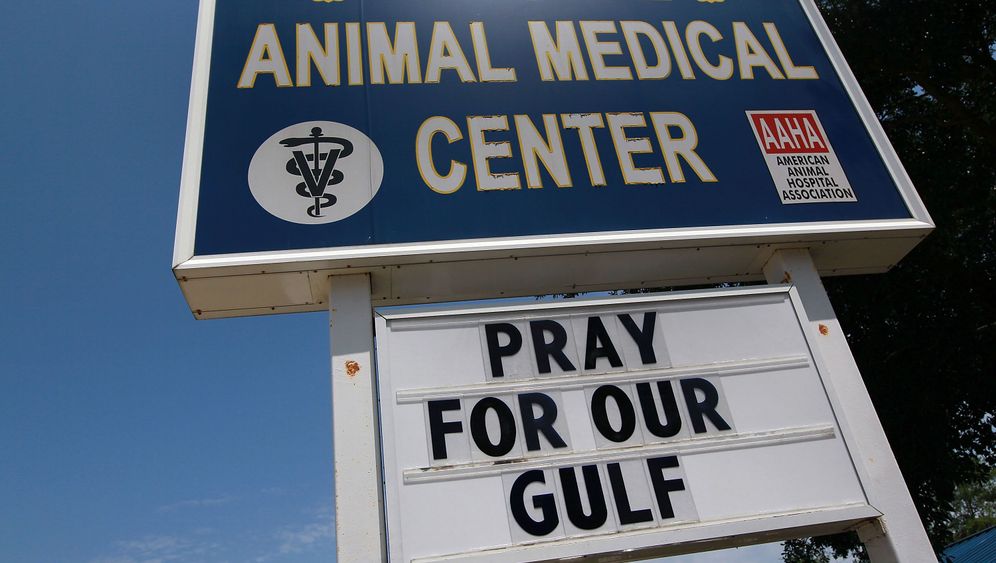 Orange booms made of resilient rubber, filling with floating foam, serve as the front line in the battle against the oil. Workers are loading meter after meter of the booms from the pier at Bud's Boat Rental onto Miss Katherine, a supply ship that normally carries crews and materials to the oil rigs.

Captain Leonard Murrel glances sullenly over at his men and wrinkles his nose. A brisk ocean breeze is laden with the heavy odor of crude oil. "It's really a huge mess out there," says the weather-beaten American, who has been working in the coastal town of Venice on the southeastern tip of the Mississippi Delta for the last 10 years. "I've never seen anything like it before."

Murrel is about to take off again to bring the oil barriers out to the "South Path," one of the channels of the Mississippi leading into the Gulf of Mexico at the outer end of the river delta. From there, workers will load the booms onto smaller ships, which will bring them out to the waters off the coast of Louisiana.

The muscular sailors work slowly and silently, knowing that they have to keep up their strength for a battle that could last a long time.

The US states along the Gulf are fighting an oil slick that could turn out to be the biggest environmental catastrophe in American history. After the explosion and subsequent sinking, on April 22, of the Deepwater Horizon, an oil rig leased by the British oil company BP, about 800,000 liters (211,000 gallons) a day of crude oil have been gushing into the waters off Louisiana, Mississippi, Alabama and Florida.

Last Thursday evening, earlier than expected, the oil slick reached the Mississippi delta only a few miles from Venice. The governor had already declared a state of emergency, after oil giant BP had admitted that it could no longer stop the oil spill on its own.

"We don't care where the solution comes from," said Doug Suttles, BP's chief operating officer of exploration and production. The most important thing, according to Suttles, is for someone to quickly come up with new suggestions on how to cap a gushing underwater oil well. Some experts have proposed feeding oil-dispersing chemicals directly to the three oil leaks at a depth of about 1,500 meters (4,920 feet) -- a completely new and not yet approved method.

Who is responsible for the accident, which also killed 11 oil workers? What exactly is the threat to the swamps and salt marshes along the lower course of the Mississippi, considered among the most valuable coastal ecosystems in the United States? And finally, what will be the political fallout for US President Barack Obama?

Drowning in the Oil Slick

It was only in late March that the president had announced the government's intention to open up new offshore areas off the northern coast of Alaska, in the Atlantic and in the eastern Gulf of Mexico for offshore drilling. The plans have now been put on ice until the causes of the Deepwater Horizon disaster have been determined. The government also faces serious questions about why it didn't react to the crisis more quickly and left it up to BP to fight the oil spill for so long.

For the region along the Gulf of Mexico, the sinking of the oil rig will undoubtedly have catastrophic consequences. The effects will likely be felt by the entire country. The coastal waters are among the most productive fishing grounds on Earth, and a large share of fish and shellfish produced in the United States comes from the region. The oyster harvest was originally scheduled to begin last Saturday, and the shrimp season was supposed to open in mid-May. Dozens of shrimp boats are sitting idle in the harbor at Venice.

"You probably get the world's best fish, oysters and shrimp here," says Roy Mareno, the owner of Bud's Boat Rental. "When the oil gets here, all that will be over for a while." An entire sector of the economy threatens to drown in the oil slick.

"The waters are extremely important as a breeding ground for fish and many other sea animals," says Ken Litzenberg of the local branch of the US Fish and Wildlife Service. He and his coworkers spent much of last week trying to jockey the oil barriers into place in the most seriously threatened areas.

Dependent on the Swamps

About 95 percent of the US fishing industry in the Gulf of Mexico is dependent on the swamps and channels of the Mississippi delta. The shallow waters, their shimmering surface constantly interrupted by small islands and sand bars, are the breeding grounds for hundreds of species of fish and shellfish. And the oil spill couldn't have happened at a worse time for the local fauna. The breeding season of the majestic brown pelican is just beginning on Breton Island, one of Louisiana's barrier islands. Wading birds such as the black skimmer and the least tern live there, and soon loggerhead turtles will crawl up onto the oil-covered beaches to lay their eggs.

"This here is one of the most important coastal habitats in the United States," says Wes Tunnell, a biologist at the Harte Research Institute for Gulf of Mexico Studies in Corpus Christi, Texas. "When the oil gets into the swamps, it kills off the vegetation first, and then the animals die."

While it is relatively easy to gather the rubbery clumps of oil on beaches, it is almost impossible, says Tunnell, to clean up shorelines in the intricately branched channels of the delta. It could take up to 10 years for the sensitive ecosystem to regenerate itself.

The wetlands also have another important function: They protect the entire region against the consequences of hurricanes. Like natural breakwaters, the vegetation slows down storm surges that build up during hurricanes. But if the oil destroys the grasses and shrubs, there will be nothing left to stop the water.

The consequences could also be devastating out at sea. Several sperm whales were already sighted off the coast last week. "The area of the spill is important habitat for endangered sperm whales, many species of threatened and endangered sea turtles, the Gulf's mysterious whale shark population, and is close to blue fin tuna spawning grounds," writes Aaron Viles of the Gulf Restoration Network in nearby New Orleans in a recent blog post. "This is an environmental disaster of epic proportions."

Who is to blame? President Obama, who on Sunday described the oil slick as a "potentially unprecedented" environmental disaster, has announced that BP will be held responsible for all damage. But the British oil company has blamed the accident on the Swiss company Transocean, which operated the Deepwater Horizon for the oil giant.

Lawsuits worth billions are to be expected. Fishermen, injured oil workers and the families of the victims are already filing lawsuits against the oil companies. One of the plaintiffs is Natalie Roshto, the wife of oil worker Shane Roshto, one of the 11 workers killed in the accident.

Roshto's suit alleges that Transocean and BP violated several regulations of the US Coast Guard and the Minerals Management Service (MMS), the government agency in charge of oil exploration. The suit also names oilfield services company Halliburton as a defendant, and alleges that, prior to the explosion, employees of the company were "engaged in cementing operations of the well and well cap," and that the work was done "improperly and negligently."

Halliburton denies the allegations, but it did confirm that it was working at the borehole. Cement work at underwater boreholes is considered problematic and is believed to have caused explosions in the past. Gas under high pressure can flow out of the borehole through cracks in the cement and ignite.

Last year, the MMS proposed new safety regulations for offshore drilling projects, after a study had documented numerous accidents. But many oil companies, including BP, criticized the new regulations for being too extensive. BP made it clear that it believed that the "voluntary programs" in the industry were very successful.

But BP itself has been involved in other incidents in recent years. Some 15 workers died in an explosion at a BP refinery in Texas in 2005, and BP was ordered to pay a fine of $87 million. There are now questions as to whether there were also irregularities at the Deepwater Horizon. The oil rig apparently was missing an additional safety system -- which is not, however, required in the United States -- which activates a device called the blowout preventer, a safety valve that can essentially cut off the flow of oil directly above the borehole.

"BP is already snake bit when it comes to safety issues," Robert Bryce of the Manhattan Institute for Policy Research in New York told Time magazine. "This is another bad blow." Offshore oil drilling is "ultra-high stakes gambling," says the energy expert. "Accidents like this are not only bad PR for the companies that are involved, they're extremely bad business."

But how dangerous is drilling for oil at depths of 1,500 meters exactly? The Deepwater Horizon, built in 2001 for $600 million, was one of the world's most advanced oil rigs, and it held the record for the deepest oil well. Engineers had driven the drill head more than 9 kilometers into the Earth's crust. But unpredictable currents, extreme pressure and low temperatures make such endeavors almost as difficult as a second Moon landing.

"Big Oil has perpetuated a dangerous myth that coastline drilling is a completely safe endeavor," says US Senator Robert Menendez. "Accidents like this are a sober reminder just how far that is from the truth."

Hopes that the leaks could be quickly plugged had largely evaporated by the end of last week. Experts said that it would be nothing short of a miracle if the blowout preventer could be activated with the help of remote-controlled underwater robots.

As an alternative, BP is now having three giant containment chambers built in the coastal town of Port Fourchon. They are designed to be placed over the leaks on the ocean floor, so that the oil can then be diverted to the surface in a controlled manner, where it can be pumped into tankers.

Experts have also begun to drill a relief well at an angle into the ocean floor, which could relieve the pressure and allow the existing well to be capped. The engineers hope to be able to enter the borehole of the Deepwater Horizon from the side, which would allow them to force cement into the boreholes and stop the flow of oil.

But all of these solutions will take far too much time. Months could go by before all the leaks are plugged.

Until then, the only option is to contain the oil slick. More than 1,000 volunteers are fighting to skim off the oil from the ocean surface, dissipating it with chemicals or simply burning it at sea.

In Venice, one truck after another arrives at the harbor, their beds constantly filled with more oil booms. Bundles of fine plastic material called "pompoms," which are supposed to absorb the oil, are stacked at the piers, ready to be used in stormy seas. Meanwhile, the mood of despair among locals is starting to become flecked with anger.

"It's just like what we saw with Hurricane Katrina," John Tesvich of Venice, a fourth-generation oyster farmer, told USA Today. "At first, it was just another storm, just like this was just another oil spill. But by the time they realize how bad it really is, it's too late."

"Why is the response taking so long?" the 53-year-old oyster farmer asks. "Why can't they stop this?" 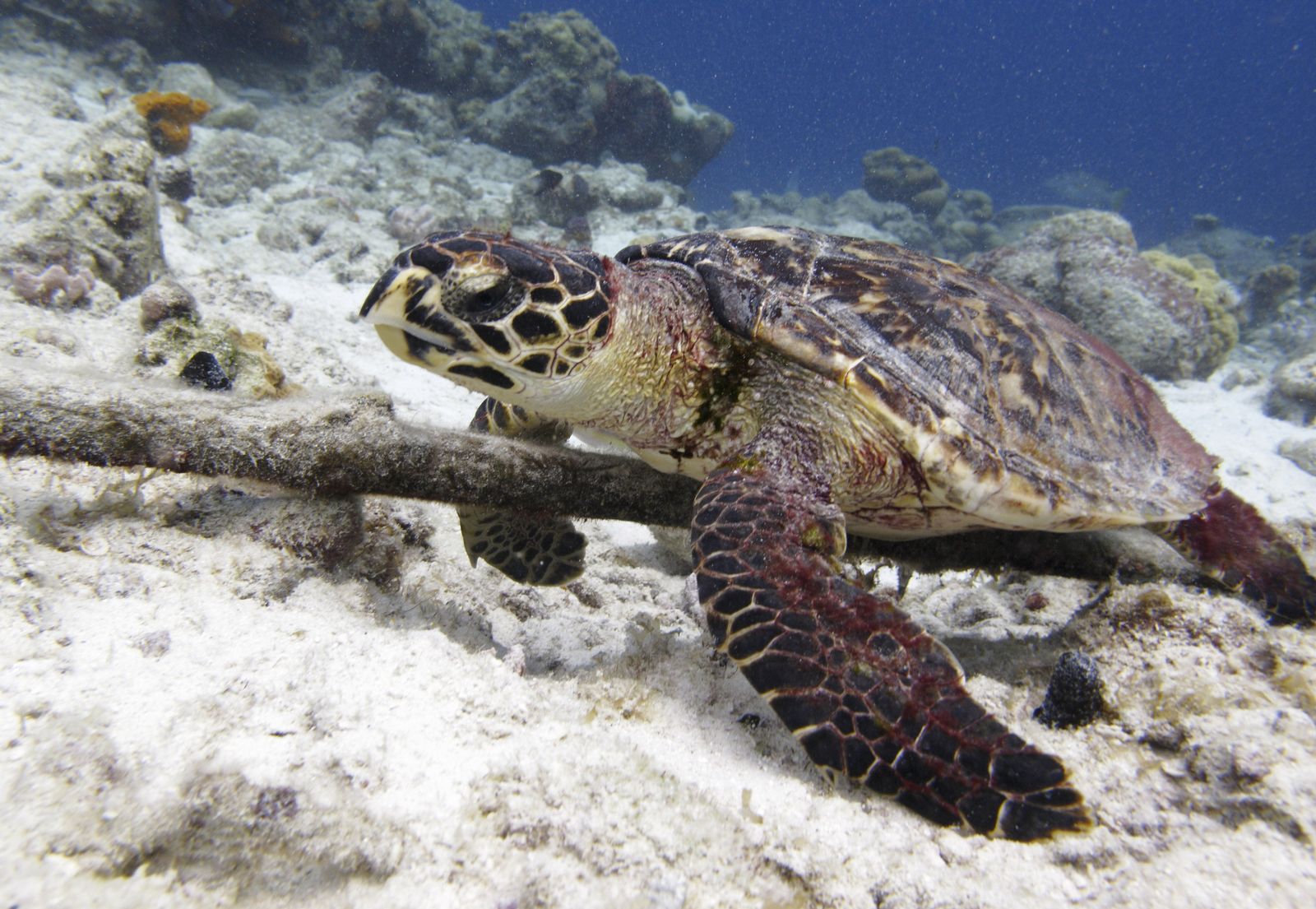 Hawksbill sea turtles could also be in danger.