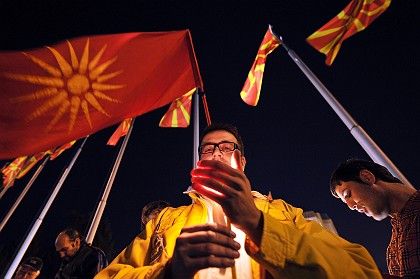 Macedonians protested in favor of their country's bid to join NATO this week, but to no avail. Greece blocked their application.

A dejected Macedonian delegation walked out of the NATO summit in Bucharest after Greece succeeded in vetoing Macedonia's membership bid on Thursday. Before heading home, Macedonian President Branko Crvenkovski said: "I want to send a message to Greece. We will survive and the Macedonian people will overcome this misfortune."

Macedonian Foreign Minister Antonio Milososki told reporters that 90 percent of his people supported membership and that he and his offiicals needed to show their solidarity with their people. "Macedonia's delegation will leave the summit because they see it as necessary to being together with our people today. This is a difficult time for a small nation."

The Greek intransigence had stemmed from its opposition to the former Yugoslav republic's name, which it shares with the northern Greek province of Macedonia. In the run-up to the summit, negotiators had attempted to find a compromise solution that would suit both sides, but time ran out and Macedonia's ambitions to join the NATO alliance were thwarted.

Greek Foreign Minister Dora Bakoyannis insisted Athens wanted to see Macedonia in the alliance once the name issue was resolved: "We hope, and we are working in that direction, that the negotiations are continued ... that that we can find a mutually acceptable solution."

However, Macedonian officials warned that the failure to absorb their country into NATO could undermine stability in the Balkans. Senior official Nikola Dimitrov told the Associated Press that it was a "huge disappointment," adding that "it sends the wrong message in terms of moderate politicians and moderate forces."

US President George W. Bush said he regretted the outcome. "Macedonia's made difficult reforms at home," he told reporters. "The name issue needs to be resolved quickly so that Macedonia can be welcomed into NATO as soon as possible."

Two other failed bids for NATO membership ended on a happier note on Thursday. Although NATO refused to grant Ukraine and Georgia a so-called Membership Action Plan (MAP), the alliance held out the prospect that the two countries would become members one day in the future and promised to review their progress in December.

"We agreed today that these countries will become members of NATO," NATO Secretary-General Jaap de Hoop Scheffer told a news conference. Ukrainian President Viktor Yushchenko welcomed the pledge, saying "Ukraine will be in NATO" one day, while Georgia's Foreign Minister David Bakradze described the statement as a "historic breakthrough."

Germany and France had blocked giving the two countries MAP status now, despite fierce pressure from Washington, arguing that neither met NATO's criteria. Public support for membership in Ukraine is barely 30 percent, while Georgia is locked in a conflict with separatists in two of its provinces.

While a Russian Foreign Ministry official described the decision as a "huge strategic mistake," Moscow's ambassador to NATO, Dmitry Rogozin, was more laconic in his response. "I doubt very much that in less than a year Georgia can solve its territorial problems and Ukraine can change the current proportion of NATO sympathizers," he told the Interfax news agency.

Meanwhile, NATO prepared to fully endorse the US's missile defense plans for Eastern Europe. Senior US officials told the Associated Press that the 26 leaders will adopt a communiqué on Thursday that will recognize the "substantial contribution to the protection of allies  to be provided by the US-led system." US President Bush has repeatedly stated that the shield is intended to protect Europe against potential attack from Iran, rather than Russia. Bush will be able to press the point in person this week when he meets Russian President Vladimir Putin at the NATO summit on Friday and then again at a one-to-one meeting in the Russian resort of Sochi on Sunday.