After nearly two weeks of climate talks and an all-night marathon session, the delegates' despair became obvious at 1:30 p.m. on Saturday afternoon. Why wasn't he being allowed to speak, a Bolivian representative called out to the delegates gathered in Warsaw. Why were others being given precedence? Developing nations, he said, were supposed to reduce their greenhouse gas emissions, while the industrialized nations were refusing to make any further financial pledges.

There it was again -- the mistrust that marred the climate conference in Warsaw. The mistrust between two blocs -- the old industrialized nations of the West on the one side and newly industrialized nations like China, India and Brazil as well as developing economies who want the West to take care of the climate problem on its own and to compensate them for their existing problems.

"The division of the world into two parts is the hidden debate that is making things so difficult," said Karsten Sach, the head of the German delegation in Warsaw. At times, he said the mood of the debate had been "horrible."

Still, by 5 p.m. on Saturday, it appeared that an agreement had been reached on a climate deal in Warsaw. It was only seconds away. But just as Polish conference president Marcin Korolec raised his hammer to conclude the proceedings, the delegate from Fiji issued an objection, protesting a single formulation in the treaty document.

The wording hindered the most important demand made by developing nations: that poor countries would be given greater aid if they are struck by natural disasters linked to climate change. Scientists believe climate change could make extreme weather events more dangerous. The developing nations demanded a new institution for managing such aid, but the industrialized nations wanted the issue to be placed under an existing framework for countries for adaptation to the effects of climate change. They feared they would be held liable if it were placed in its own category.

A delegate from Nepal said that wasn't what had been agreed to. Meanwhile, a delegate from Fiji, speaking on behalf of the developing and emerging economies, said, "There is absolutely nothing to write home about at the moment."

Talks were broken off yet again. Representatives of the United States, the European Union and the poorer countries then gathered in the middle of the room and began intense discussions. At 7:15 p.m, they finally found a compromise. "Loss and Damage," as the issue is referred to in UN jargon, would be addressed under the existing adjustment provision. But they also agreed that the status of the new Warsaw Mechanism for Loss and Damage would be renegotiated at the 22nd climate conference in 2016. The treaty also states that the losses and damage caused by weather catastrophes go beyond the scope of adaptation. Ultimately, the agreement delays any real decision.

Here's an overview of the other important results of the UN climate conference in Warsaw:

In many important questions, however, global divisions prevented agreement. Right up to the end, representatives of developing nations had asked the West to make larger payments even before 2020, calling for $70 billion per year starting in 2016. Industrial nations had already provided $10 billion a year from 2010 to 2012, but there are no clear commitments for the period betwen 2013 and 2019. Germany, however, is providing €1.8 billion in 2013, Environment Minister Peter Altmaier reported in Warsaw last week, mostly in development aid projects. By 2020 this figure will rise to €3 billion according to unofficial plans.

"We are very disappointed with the draft text," the Bolivian representative said on Saturday afternoon in the UN plenum. "This ought to be a financial summit," he argued angrily.

"We are frustrated by how things are developing," added the Fijian representative speaking on behalf of developing and emerging countries. The approach of the EU and US was disappointing, the Chinese delegate said. His country supported the demands of the poorer states, he said.

The EU representative retorted that it was European money that had enabled several global climate change initiatives such as the green climate fund and the adaptation fund to be established at the Warsaw conference. In addition, Europe had contributed significantly to the so-called "Fund for the Poorest Countries," so far to the tune of $600 million.

These funds were Europe's decisive trick in persuading the poorest countries to leave the bloc of developing nations and come over to its side. The world's 48 poorest countries gave up their opposition to the deal on the table at Warsaw and suddenly voted for the climate compromise. For a short time, the world's division had been overcome.

With the Warsaw deal, the EU and US managed to get developing and emerging countries to also set targets by 2015 for limiting their greenhouse gas emissions. Still, the ambitions have been scaled down: Whereas earlier drafts mention "commitments," now it is only "contributions." China and India strongly opposed more binding wording that had been promoted by France.

"We would have preferred something a little more ambitious," said Sach, describing the talks as a "tough fight". But "some states wanted to hold on to the old world with all their might, even though the balance of power has long since shifted." He said it is no longer realistic for strong nations like China, India or Brazil to demand that they still be considered developing countres when it comes to climate change. After Warsaw, he said, it is clear that the world's divisions must be overcome. 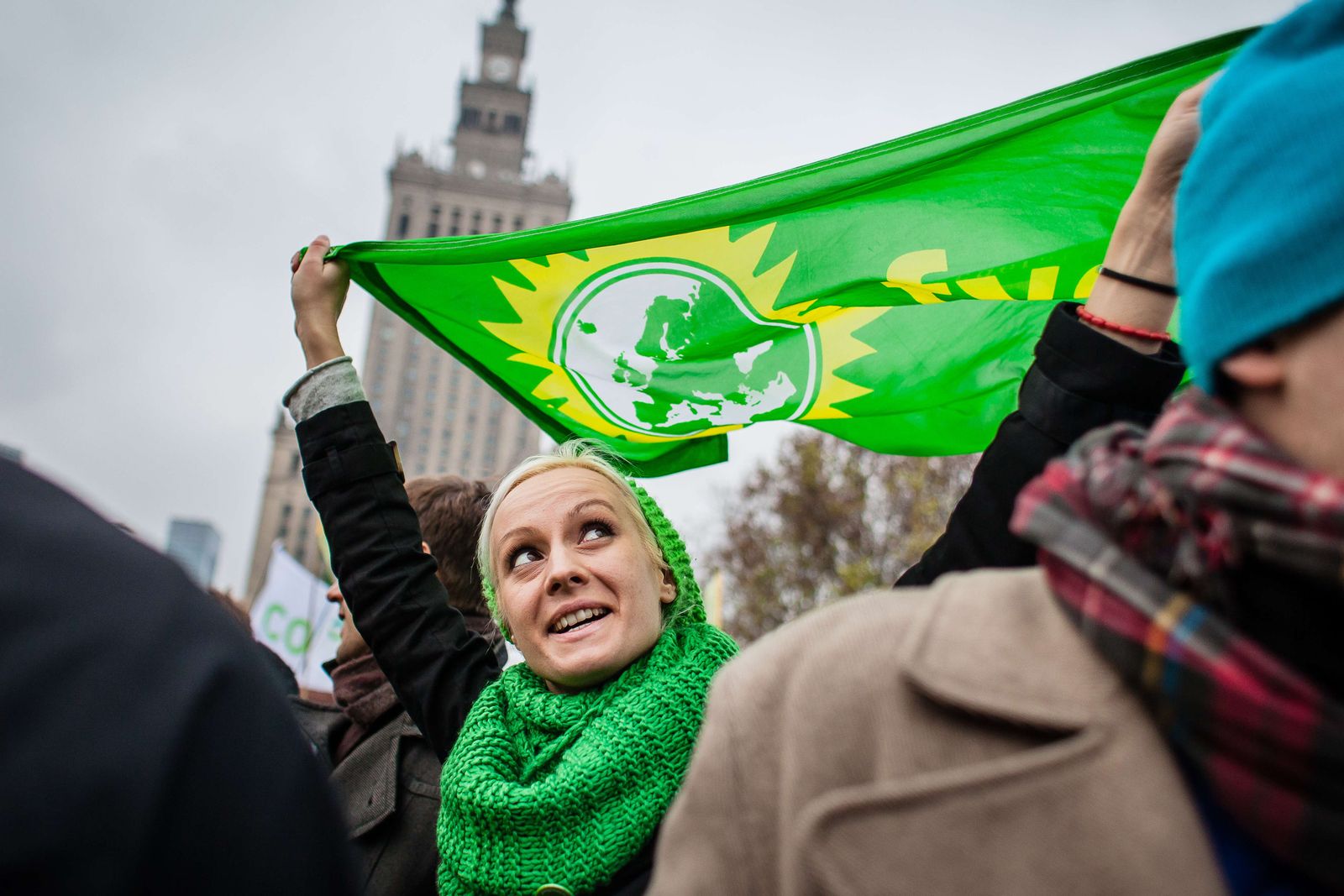 Environmental activists march in Warsaw during the proceedings of the UN Climate Conference.