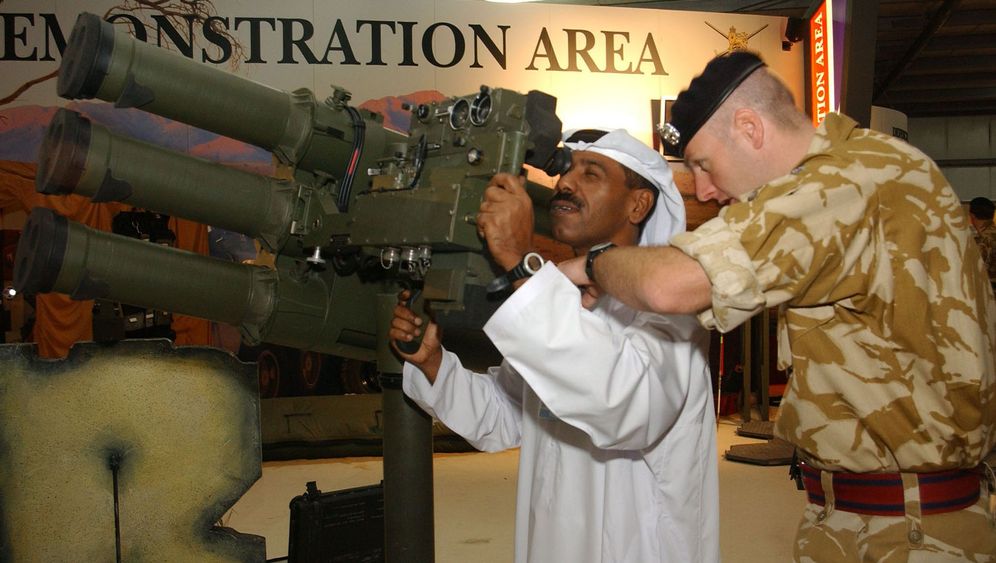 Photo Gallery: Injecting the West's Weapon into the Arab World

The revolutions in the Arab world caught British Prime Minister David Cameron off guard. For some time, diplomats had been planning a trip for Cameron that would take him to several countries in the Middle East. In fact, it was meant to be more of a trade mission, with Cameron's delegation consisting largely of high-level executives from Great Britain's weapons industry.

But then came the revolutions in Arab countries and the fighting in Libya. Ignoring them was impossible, and Cameron added a six hour stopover in Cairo to his already tight schedule. It was almost exactly a month ago that he visited Tahrir Square in the center of the city, the focal point of mass demonstration which ultimately forced Egypt's aging leader, Hosni Mubarak, out of office.

"Meeting the young people and the representatives of the groups in Tahrir Square was genuinely inspiring," Cameron said. "These are people who have risked a huge amount for what they believe in."

From Egypt, Cameron flew on to Kuwait, where he got down to the real purpose of his trip: selling weapons to Arab autocrats. When members of parliament back home attacked him for this lack of tact, the prime minister insisted there was nothing wrong with such business transactions and that, in any case, his government made weapons buyers pledge to not use them to violate human rights under any circumstances. Great Britain, he said, has "nothing to be ashamed of."

Britain, though, has exported over €100 million ($142 million) in weapons to Libyan dictator Moammar Gadhafi in the last two years alone. Included in those shipments are sniper rifles that may currently be in use against the Libyan opposition. Furthermore, Gadhafi's terror police are British-trained. Indeed, British officials were forced to hastily revoke 50 arms export licenses to Libya and Bahrain.

Cameron now finds himself in a tight spot shared by many Western politicians. Policies that seemed fine prior to the revolutions are now questionable. Regional paradigms are shifting and, at a time when populations are throwing off the yoke of oppression, Realpolitik is a poor guide to Western policy.

Until recently, the West had been arming despots in the Arab world with a series of ever-larger, billion-dollar deals that served to stabilize their regimes. Some are close allies when it comes to Iran and al-Qaida, making questions about human rights and democracy secondary.

In addition, many of the region's potentates were convenient partners for the West: They had their people more or less under control, and some provided oil. Even Gadhafi proved useful by keeping poor African refugees out of Europe. Likewise, many of the rulers bought whatever the West's defense industry put up for sale.

The Ascent of German Arms

This was certainly also the case with Germany's defense industry. According to the Stockholm International Peace Research Institute (SIPRI), though it still lags far behind the United States and Russia, Germany has become the world's third-largest weapons exporter in recent years.

Indeed, SIPRI statistics show that, over the last decade, the German defense industry's share of the global arms market has doubled to 11 percent. In 2008, the total value of these arms sales amounted to just under €6 billion. Germany primarily supplies high-tech items, such as submarines and military electronics. German defense corporations -- such as EADS, Rheinmetall and Heckler & Koch -- together employ roughly 80,000 people.

German military wares are so good that even Russia has become a reliable customer. Although Russia's own products are perfectly suited for guerilla warfare in Africa, Russian Defense Minister Anatoly Serdyukov admits that they no longer meet "modern requirements."

For this reason, Russia plans to order military hardware worth nearly €500 billion by 2020, including many items from the West. The Russian army would like to replace its T-90 tanks for the German Leopard 2, and Rheinmetall is to provide armored plating for other Russian vehicles. Even Russia's mobile military camps will soon be "made in Germany." Kärcher Futuretech, a company based in Winnenden, near Stuttgart, manufactures the finest in field kitchens and water purification systems.

A Brisk Arms Trade with Libya

Compared to these plans, Gadhafi purchases were only modest. Until October 2004, the EU had an arms embargo in place against Libya. By the next year, German companies had delivered all-terrain vehicles worth a mere €300,000. In 2006, orders for military equipment jumped in value to nearly €2 million. In 2007, orders totalled €24 million; in 2008 a mere €4 million; and in 2009, more than €53 million.

Gadhafi bought modern launching equipment for anti-tank missiles (the French-German "Milan 3"), helicopters, communications technology, battlefield radar technology and electronic jammers. These last items would seem to be serving the regime well in its current battle, given that the rebels in the country's east primarily use cell phones to organize their largely chaotic operations. It is notable how often the cell-phone network collapses right before Gadhafi loyalists strike.

In Germany, every arms export deal must be officially approval. The Federal Security Council, made up of various ministers and the German chancellor, makes these delicate decisions behind closed doors.

Still, the prize goes to Italian Prime Minister Silvio Berlusconi, who sold his buddy Gadhafi more weapons than any other leader in Western Europe. The total amount for 2009 was roughly €110 million, mostly for helicopters.

Indeed, Europeans have been fostering such business ties in a number of the Arab countries whose governments are now faltering. Great Britain's Prince Andrew, for example, visited Yemeni President Ali Abdullah Saleh in San'a in late 2009. Over lunch at the royal palace, the prince-turned-government-trade-rep praised Yemen's "unity, stability and development."

Prince Andrew arrived in the country with investment money -- and then suggested that Saleh could take care of his weapons needs in the British isles. Which the Yemeni president then did. Shortly after the prince's trip, the British government authorized the sale of ammunition and bulletproof vests worth €183,000 to Yemen. These days, of course, Saleh's security forces are busy firing at demonstrators. Two weeks ago, 52 protesters were killed in a single day.

Germany, for its part, has had well-established ties to Egypt for several years. In 2009, Germany provided equipment worth nearly €80 million; most of it was tank components and military electronics, but it also includes submachine guns. It's unclear whether these ended up in the hands of the army, which sided with the people, or whether they became the property of the detested police. When unrest broke out there, Germany temporarily revoked arms export licenses to Egypt.

Meanwhile, the United States thinks on a very different scale, especially when it comes to Saudi Arabia. The House of Saud has money to spend, and Washington wants to arm Saudi Arabia against Iran. But on Monday, March 14, Saudi troops marched into Bahrain to help put down the rebels there.

Last year, Washington announced the largest arms export deal in history: Saudi Arabia plans to buy aircraft worth $60 billion over the course of the next five to 10 years. Money is no object, and the Saudi air force is to receive F-15 fighter-bombers, Apache attack helicopters, missiles, radar equipment and bombs. All together, according to the Wall Street Journal, the order is large enough to guarantee 77,000 jobs at Boeing.

For an additional $30 billion, the Saudi royal family also plans to modernize its navy. To calm Israeli fears, the country will receive cutting-edge F-35 jets (also known as "Joint Strike Fighters") that, if necessary, will be able to shoot the older Saudi F-15s out of the sky.

The United Arab Emirates (UAE) are similarly lavish in their spending -- and equally afraid of their overly powerful neighbor Iran. According to a confidential diplomatic cable from the US Embassy in Abu Dhabi released by Wikileaks, the UAE's sheiks have spent billion -- but without clear planning or an "obvious master plan for an integrated defense network." The emirates want to buy only the best, the cable continued, and "the shinier the better."

The UAE's militaries reportedly even ask -- impatiently and often -- for weapons that are still in the development phase, the cable added, only to discover that the weapons system they're looking for "had not yet been invented." The downside, the dispatch continues, is that the sheiks prefer not to put "all eggs in one basket," so they also buy from France, Britain and even China.

Even so, in 2010, the UAE ordered $40 billion worth of weapons from the United States. To be able to shoot down Iranian missiles, they also want to buy America's most modern air defense system. The Americans would be happy to set up similar systems in the entire region.

Give the situation, one can't really blame investors for viewing the conflicts and revolutions in the Middle East primarily as a signal to buy. When the United Nations declared a no-fly zone over Libya, the armaments index on the New York Stock Exchange shot up by 5 percent. 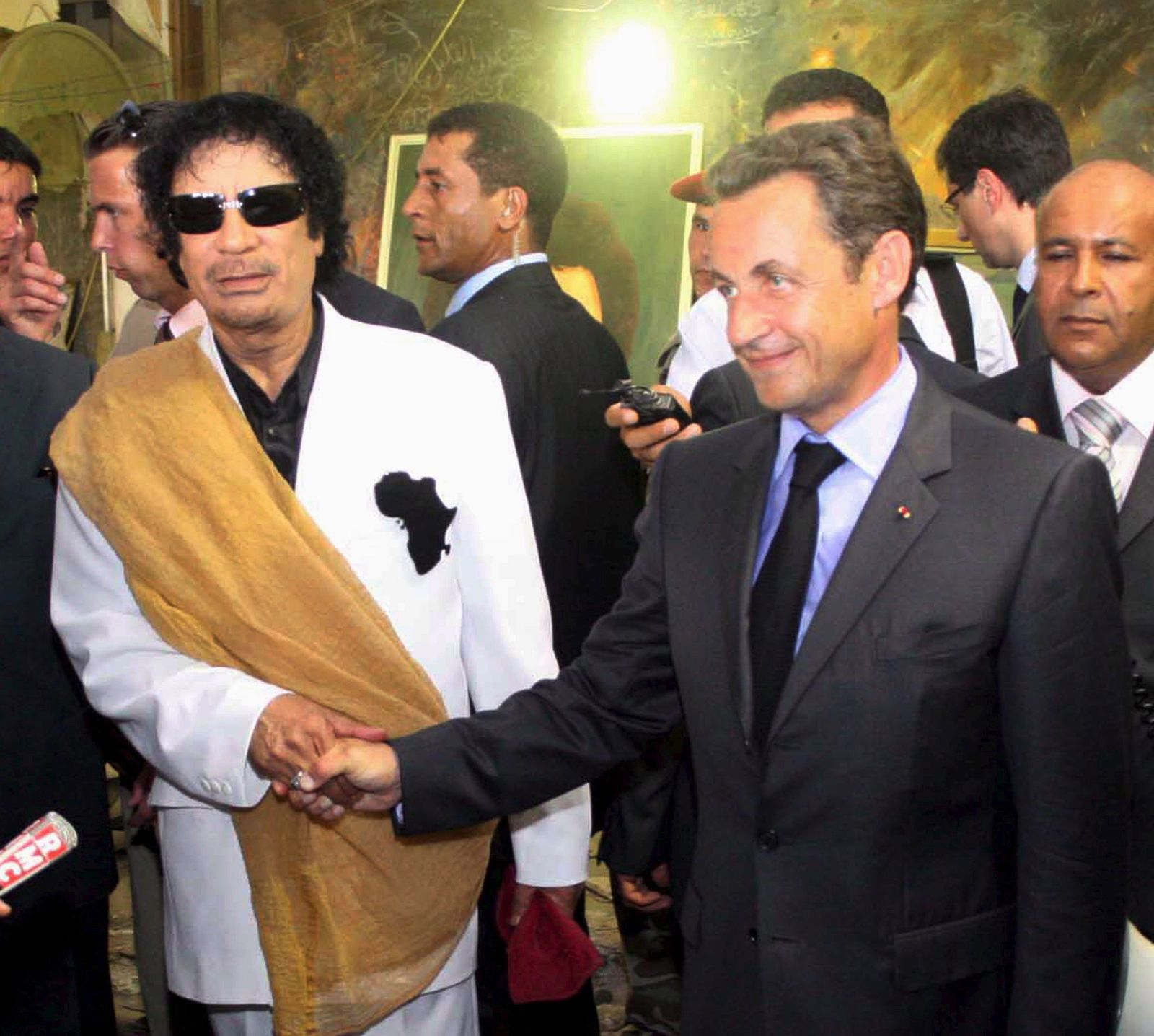 Until October 2004, the EU had an arms embargo in place against Libya and its leader Moammar Gadhafi, shown here with French President Nicolas Sarkozy in 2007. Since then, Gadhafi has been an eager buyer of Western armaments. Now, in the wake of revolutions in places like Libya, Egypt and Bahrain, many of the things that seemed fine beforehand are now suddenly wrong.