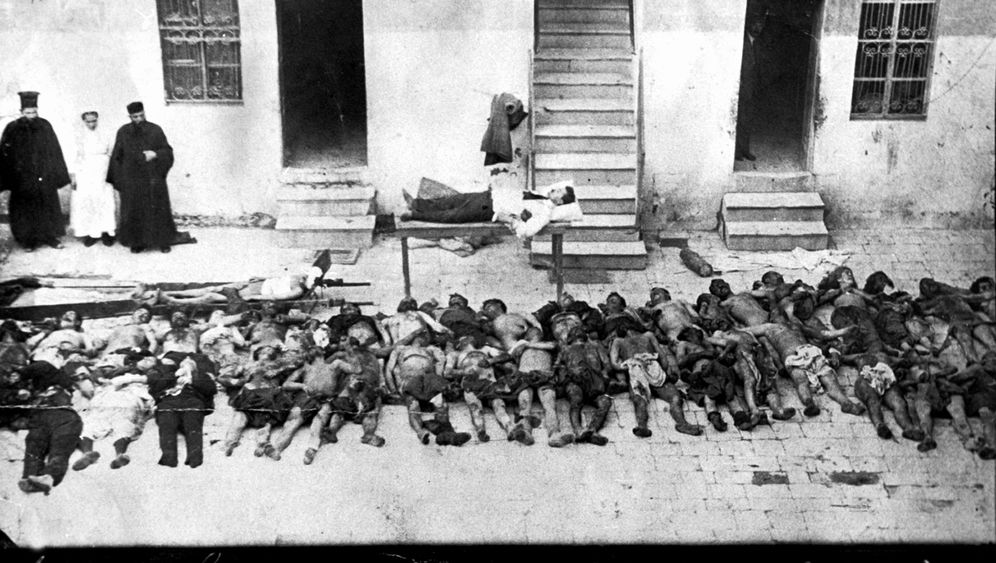 Photo Gallery: An Atrocity of the Ottoman Empire

Tigranui Asartyan will be 100 this week. She put away her knives and forks two years ago, when she lost her sense of taste, and last year she stopped wearing glasses, having lost her sight. She lives on the seventh floor of a high-rise building in the Armenian capital Yerevan, and she hasn't left her room in months. She shivers as the cold penetrates the gray wool blanket on her lap. "I'm waiting to die," she says.

Ninety-two years ago, she was waiting in a village in on the Turkish side of today's border, hiding in the cellar of a house. The body of an Armenian boy who had been beaten to death lay on the street. Women were being raped in the house next door, and the eight-year-old girl could hear them screaming. "There are good and bad Turks," she says. The bad Turks beat the boy to death, while the good Turks helped her and her family to flee behind withdrawing Russian troops.

Avadis Demirci, a farmer, is 97. If anyone in his country keeps records on such things, he is probably the last Armenian in Turkey who survived the genocide. Demirci looks out the window at the village of Vakifli, where oleander bushes and tangerine trees are in full bloom. The Mediterranean is visible down the mountain and in the distance.

In July 1915, Turkish police units marched up to the village. "My father strapped me to his back when we fled," says Demirci. "At least that's what my parents told me." Armed with hunting rifles and pistols, the people from his and six other villages dug themselves in on Musa Dagh, or Moses Mountain. Eighteen years later, Austrian writer Franz Werfel described the villagers' armed resistance against the advancing soldiers in his novel "The Forty Days of Musa Dagh."

"The story is true," says Demirci. "I experienced it, even if I am only familiar with it from the stories I was told."

Aside from Werfel's book -- and the view, from the memorial on Zizernakaberd hill near Yerevan, of the eternally snow-capped and eternally inaccessible Mount Ararat -- there are few reminders left of the Armenian genocide as its last few survivors approached death.

Between 1915 and 1918, some 800,000 to 1.5 million people were murdered in what is now eastern Turkey, or died on death marches in the northern Syrian desert. It was one of the first genocides of the 20th century. Other genocides -- against the European Jews, in Cambodia and in Rwanda -- have since taken their place in history between the Armenian genocide and today.

The Armenian people, after suffering partial annihilation, then being scattered around the world and forced back to a country that has remained isolated to this day, have taken decades to come to terms with their own catastrophe. It was only in the 1960s, after a long debate with the leadership in Moscow, that the Armenians dared to erect a memorial.

Turkey, on whose territory the crimes were committed, continues to deny the actions of the Ottoman leadership. Germany, allied with the Ottoman Empire in World War I, and the Soviet Union, well-disposed toward the young Turkish republic, had no interest in publicizing the genocide.

Germany has still not officially recognized the Armenian genocide. In 2005, the German parliament, the Bundestag, called upon Turkey to acknowledge its "historical responsibility," but it avoided using word "genocide."

Because of Ankara's political and strategic importance in the Cold War, its Western allies did not view a debate over the genocide as opportune. And the relative lack of photographic and film material -- compared with the Holocaust and later genocides -- has made it even more difficult to examine and come to terms with the Armenian catastrophe. "The development of modern media," says German documentary filmmaker Eric Friedler ("The Silence of the Quandts"), "arrived 20 years too late for the examination of this genocide."

But there are contemporary witnesses, Germans and Americans, in particular, whose accounts and correspondence are preserved in archives, where they have been studied mainly by specialists until now. This Friday, to mark the 95th anniversary of the genocide, Germany's ARD television network will air the elaborately researched documentary "Aghet" (Armenian for "Catastrophe"), which brings the words of diplomats, engineers and missionaries to life.

An ensemble of 23 German actors narrates the original texts -- not in the style of a docu-drama, which re-enacts the events using semi-fictional dialogue and historic costumers, but in simple interviews that derive their effectiveness from the selection of texts and the presentation rather than a dramatization of history.

The first performer is actor and author Hanns Zischler, who starred in director Wim Wenders' 1976 film "Im Lauf der Zeit" (or "Kings of the Road"). He reads the words of Leslie Davis, who, until 1917, was the US consul in the eastern Anatolian city of Harput, where thousands of Armenians were herded together and sent on a death march toward the southeast. "On Saturday, June 28th," Davis wrote, "it was publicly announced that all Armenians and Syrians [Assyrians of the Armenian Apostolic faith] were to leave after five days. The full meaning of such an order can scarcely be imagined by those who are not familiar with the peculiar conditions of this isolated region. A massacre, however horrible the word may sound, would be humane in comparison with it."

Friedrich von Thun, a film and television actor who appeared in Steven Spielberg's film "Schindler's List," plays US Ambassador Henry Morgenthau. He describes encounters with Ottoman Interior Minister Talaat Pasha, who, at the beginning of the operation, confronted Morgenthau with the "irrevocable decision" to render the Armenians "harmless."

After the genocide, Talaat summoned the US ambassador again and made a request that Morgenthau said was "perhaps the most astonishing thing I had ever heard." Talaat wanted the lists of Armenian customers of the American insurance companies New York Life Insurance and Equitable Life of New York. The Armenians were now dead and had no heirs, he said, and the government was therefore entitled to their benefits. "Naturally, I turned down his request," Morgenthau wrote.

Actresses Martina Gedeck and Katharina Schüttler recount the memories of two missionary sisters, one Swedish and the other Swiss. Hannah Herzsprung and Ludwig Trepte narrate the experiences of two survivors, and Peter Lohmeyer reads from the diary of German Consul Wilhelm Litten, one of the most shocking documents of the time.

On Jan. 31, 1916, Litten was on the road between Deir al-Zor and Tibni in present-day Syria, where he wrote the following entry into his diary: "One o'clock in the afternoon. On the left side of the road is a young woman, naked, wearing only brown stockings on her feet, her back turned upward and her head buried in her crossed arms. 1:30 p.m. In a ditch on the right side is an old man with a white beard, naked, lying on his back. Two steps away is a boy, naked, back turned upward, his left buttock ripped off."

Equally cold and calculating was the reply of then-Chancellor of the German Reich, Theobald von Bethmann-Hollweg, to the German ambassador's proposal to publicly rebuke Germany's Ottoman allies for the crime. "Our only goal was to keep Turkey on our side until the end of the war, regardless of whether or not Armenians perished."

The wealth of image and film documents gathered from archives as distant as Moscow and Washington, says author and director Friedler, even surprised the historians who provided him with expert advice for his 90-minute film. Some incidents, such as the ostentatious 1943 reburial in Turkey of the remains of Talaat Pasha, who was murdered in Berlin in 1921, will be shown on film for the first time. Other documents depict individuals who the archivists had not recognized there before.

The film also offers an oppressive description of the current debate over the genocide, which is only now erupting in Turkey, almost a century after the crime. Prime Minister Recep Tayyip Erdogan blusters that Turkey will never admit that genocide took place. During an exhibition on Armenia, ultra-nationalists angrily rip photographs from the walls, and then, as if they've lost their minds, they attack a car in which Orhan Pamuk, winner of the Nobel Prize for literature, is being taken home after a court appearance -- because he dared to express what historians had proven long ago.

For decades, Armenians born after the genocide felt tortured and troubled by it. "The tragedy," says Hayk Demoyan, the director of the genocide memorial in Yerevan, has become "a pillar of our national identity." And Armenian President Serge Sarkisian has told SPIEGEL: "The best way to prevent the repetition of such an atrocity is to condemn it clearly."

The post-genocide generation of Turks had no trouble sleeping. Mustafa Kemal Atatürk, the founder of the Turkish republic, made a radical break with the Ottoman Empire and the three men who were primarily responsible -- Talaat, Enver and Cemal Pasha. Atatürk admitted that "wrongs" had been committed, wrongs his successors deny to this day, but he also let government officials and military leaders participate in his government who had been directly involved in the genocide.

The demons of the past are now awakening in response to pressure, particularly from the Armenian Diaspora. Every spring, before the April 24 anniversary of the arrests of Armenian politicians and intellectual in what was then Constantinople, arrests that marked the beginning of the deportations in 1915, more national parliaments adopt resolutions to acknowledge the Armenian genocide: France in 2001, Switzerland in 2003 and, this year, the Foreign Affairs Committee of the US House of Representatives and the Swedish parliament.

Every time one of these resolutions is passed, Ankara threatens with political consequences -- and ultimately never follows through. It has become a ritual, the purpose of which men like Hrant Dink have questioned. The publisher of the Turkish-Armenia newspaper Agos didn't dwell on the definition of the world "genocide." Instead, he wanted Turkey to confront its gruesome past directly.

He paid for his views with his life. On Jan. 19, 2007, Dink was murdered in broad daylight. The 200,000 Turks who marched through the streets of Istanbul at his funeral, holding up banners that read "We are all Armenians," humiliated their own government with their forthrightness. A reality which thousands of Turks are confronted with in their own families appears to have had a stronger impact than diplomatic pressure.

In the early 1980s, Istanbul attorney Fethiye Çetin discovered that she had Armenian roots. Her grandmother Seher had confided in her after several anguishing decades. In 1915 Seher, who was baptized with the Armenian name Heranush, witnessed the throats of men in her village being slit. She survived, was taken in by the family of a Turkish officer, was raised as a Muslim girl and eventually married a Turk. She became one of tens of thousands of "hidden Armenians" who escaped the murderers and blended in with Turkish society.

Her grandmother's revelation came as a shock to Çetin, and she began to see her surroundings with different eyes. In 2004, Çetin wrote a book in which she outlined the history of her family. "Anneannem" ("My Grandmother") became a bestseller, and countless readers contacted Çetin, many with words of appreciation.

Others cursed her as a "traitor." But the taboo had been broken.