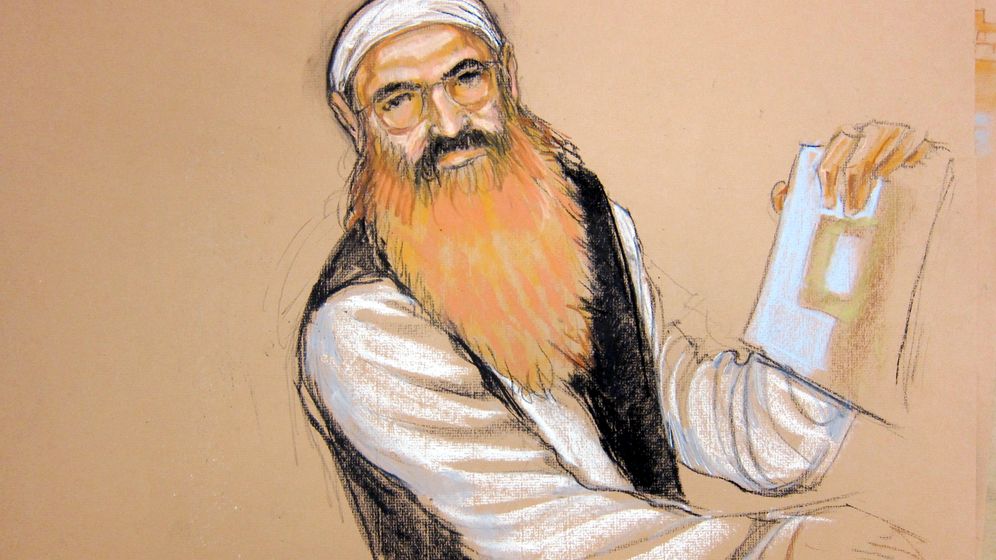 Photo Gallery: The Hearings at Guantanamo

Khalid Sheikh Mohammed achieved a first minor victory at 9:46 on Wednesday morning. Three muscular US soldiers, all inexplicably wearing blue latex gloves, led the defendant into air-conditioned Courtroom 2 on the US base at Guantanamo Bay, Cuba. Surrounded by the soldiers, Mohammed, the chief planner of the 9/11 attacks, looked almost like a dwarf.

The defendant took his time. It's a moment he had long been waiting for. Slowly, he sat down on a low leather chair in the first of the five rows of the dock. Then he turned to face the visitors' gallery behind him, a gentle smile on his face.

The scene could only be interpreted to mean that Khalid Sheikh Mohammed, widely known simply by his initials KSM, wants to be seen. The trial is his last propaganda campaign, he leaves no doubt of that. On that morning in court, the man the New York Post called the "9/11 beast" was for the first time wearing a camouflage vest over his long, white robe.

For the slight defendant, who with his henna-dyed beard and turban, looks increasingly like his former comrade Osama bin Laden, the vest is a statement. To this day, he sees himself as a warrior locked in a bitter struggle against the United States.

Since this spring, Mohammed, together with his four alleged accomplices, has been waging what may ultimately be his last battle at Camp Justice, a collection of container-style structures erected specifically for the terrorism trial. For the second time, the US government is seeking to convict the masterminds of the 9/11 conspiracy here in Guantanamo, far from the United States, 11 years after the terrorist attacks on New York and Washington.

As former President George W. Bush did in 2008, the administration of current President Barack Obama leaves no doubt that the trial of the century will end with death sentences. But the verdict is no longer the main story in the whitewashed, windowless, high-security courtroom. The focus has shifted to various aspects of the trial itself, from the defense attorneys' request that it be broadcast on television worldwide, to the media's call for more transparency and the question as to whether the government will allow a reasonably fair trial. After the first hearings since the 13-hour arraignment in May, this seems unlikely.

The 9/11 mastermind took every opportunity to bark his opinions about the proceedings into the microphone. On Tuesday, he told the judge that he could not expect justice from the court. Then he lowered his gaze to documents and newspapers on his table. During last week's hearings, Mohammed abruptly began speaking on Wednesday afternoon, attacking the government and offering his advice for a full six minutes. The military commission, he said, should not let itself be distracted by the "crocodile tears" shed over the dead of 9/11, and added that the real evildoers were in the White House and not in the Guantanamo courtroom.

Then he turned to Bin Laden's death. "I don't want to be long, but I can say the president can take someone and throw him in the sea under the name of national security," he continued.

Some of Mohammed's accusations are absurd and arrogant, and yet they also reflect the problems in this case, which, if all goes according to plan, will only begin in earnest next summer before Colonel James Pohl's military tribunal. The past is still creating difficulties for the prosecutors. The fact that the defendants were kept imprisoned for many years, as well as the details of torture in secret CIA prisons, are to be kept out of the 9/11 trial -- one of the reasons that there is a button in the courtroom that the government can use to turn off the audio transmission. When that happens, journalists and family members in the visitors' room can no longer hear what defendants or attorneys are saying.

Nevertheless, Washington wants to make sure that the upcoming trial looks clean. President Obama has already failed to close Guantanamo as promised; it is now all the more important that the trial be a success. Obama has appointed Brigadier General Mark Martins as chief prosecutor, an ascetic type who only allows himself a few hours of sleep a night and runs 10 kilometers (about 6 miles) a day. Martins is at pains to defend the resumption of military trials for Guantanamo detainees and to insist to the world that they are fair. Almost every evening, he speaks to the few journalists who have been flown in, cordially addressing them by their first names.

The 52-year-old attended the United States Military Academy at West Point and, like President Obama, is a graduate of Harvard Law School -- the two were even there at the same time. Now he faces the most difficult mission of his career. Dubbed the "Detox Man" in the US press, Martins' task is to wipe out the toxic legacy of the Bush era. The general prefers to characterize his work as a "tough challenge."

On a recent, humid afternoon outside of Washington D.C., Martins is sitting in his office, the location of which he prefers not to divulge for security reasons. There is no sign, not even an American flag, to indicate that this is where the country's highest-ranking terrorist prosecutor is based. Since Martins arrived in October 2011, uniforms have been banned at the office. He wants everyone to look like ordinary lawyers who are involved in a perfectly ordinary case.

Even the harshest critics of the military tribunal admit that Martins has made some changes, taking steps toward injecting transparency into the military courts set up for the 9/11 plotters. He reformed the commission, and granted the defendants a better defense by allowing them to be represented by civilian attorneys. He also promised to exclude evidence obtained through torture or hearsay.

But even under Martins, some of the absurdities of the case persist. For instance, the government requested last week that previously published documents about the 9/11 plot and the ensuing investigation be withheld from the defense. Furthermore, the jury -- to be made up of soldiers -- is to remain anonymous for security reasons.

Martins is sitting in a leather armchair beneath a copy of President Obama's 2009 executive order banning torture. By using new evidence, he says, he wants to finally close the chapter on 9/11. Martins has a plan: In the place of the confessions obtained at CIA "black sites," he only wants to present material to the court that a so-called "clean team" from the FBI obtained after KSM and the others were flown to Guantanamo in 2006 -- material which is "untainted" by torture, sleep deprivation or other brutal methods used on the detainees.

If the government has its way, the period between the defendants' arrest and their transfer to Guantanamo in 2006 will not even be mentioned in public hearings, once the trial finally starts. And even if torture methods like waterboarding, which the CIA employed 183 times with Khalid Sheikh Mohammed alone, are now banned, officials here say that any revelation could be harmful to national security.

General Martins doesn't like to talk about torture either, just about "misconduct by some in the administration."

Such statements bring a weary smile to David Nevin's face. The 63-year-old has been Khalid Sheikh Mohammed's civilian lawyer since 2008. On the evening after the hearings, he was standing in shorts and a T-shirt in front of O'Kelly's, an Irish pub on the base. It has become a gathering place for the Guantanamo traveling court, which has to be flown in from Washington for every hearing, earning it the nickname "the flying circus of Gitmo."

The Idaho native is a formidable opponent for prosecutor Martins. Nevin has also had a storybook career. In the last 30 years, he has repeatedly and successfully worked for defendants that the public had already written off as guilty, earning him the nickname "Velvet Shiv."

Nevin refuses to accept the government's insistence on keeping torture of the defendants out of the trial. "My client was abducted and tortured with the government's consent, and now he is to die at its behest," he says. "How can torture not play a role in the trial?"

Unlike other defendants, Khalid Sheikh Mohammed is cooperating with Nevin, but the US government has ordered Nevin to say nothing at all about his client or their interactions. This explains why the attorney isn't even able to reveal whether his client prefers to eat tuna or cheese sandwiches, or what he says when the two men talk about soccer. Anything KSM tells Nevin is "presumptively classified." After all, the government insists, it could jeopardize national security. 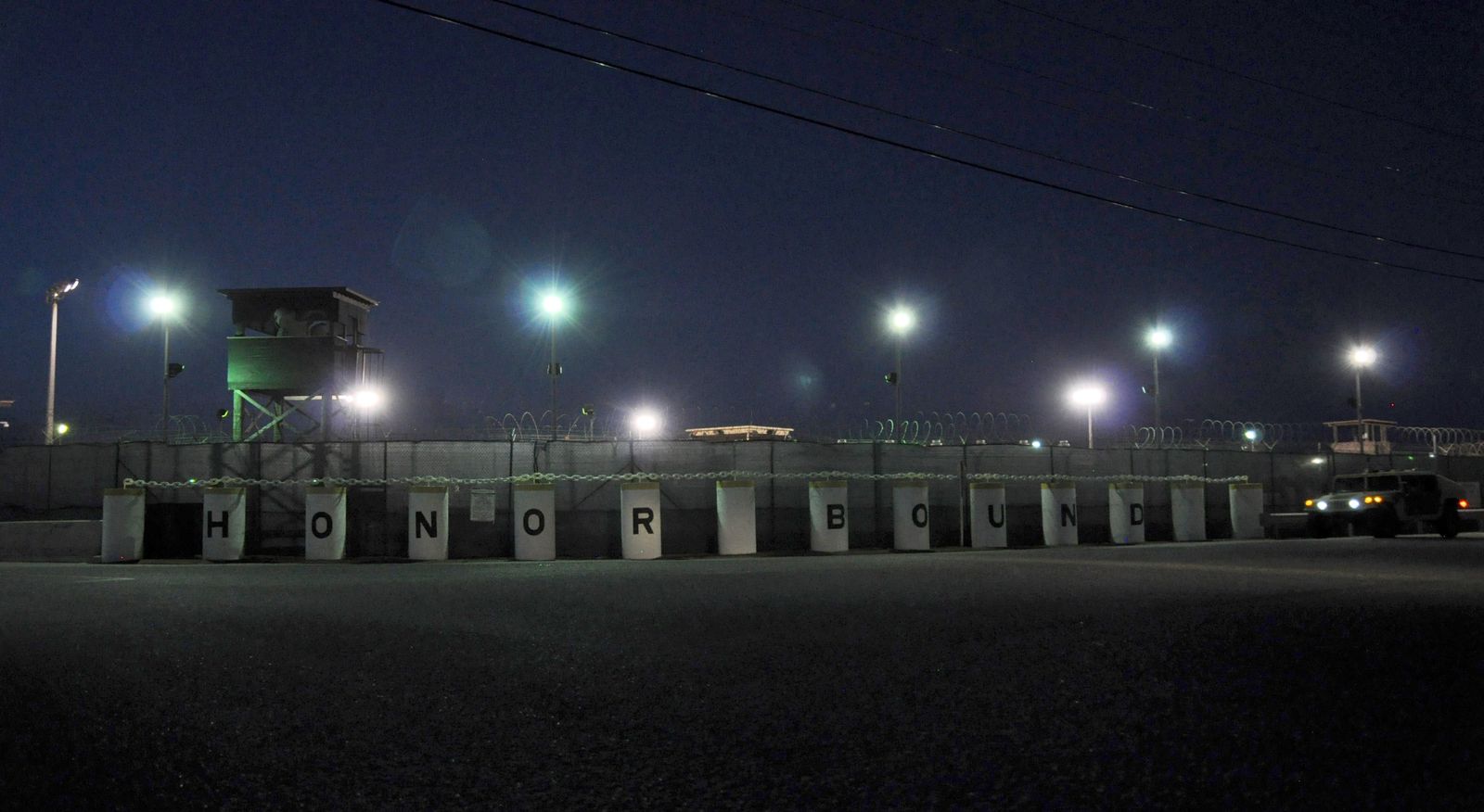 The US detention center Camp Delta in Guantanamo. Those being tried at the military tribunal there stand to receive the death penalty.