SPIEGEL: You're calling for an end to all development aid because you believe it's ineffective. And you're doing so at a time when 750,000 people are on the verge of starving to death in Somalia. Is that really the best thing to do?

Dambisa Moyo: The situation on the Horn of Africa has reached emergency proportions, and aid is absolutely necessary there. But we need to be humble. I don't believe these problems will disappear just because rice and corn are being sent there by the sackful. Africa is the only continent on which there continues to be famines again and again. Between 400 and 500 million people don't have enough to eat even though the continent has more fertile arable land than any other. Something's wrong about that.

SPIEGEL: What needs to happen to eliminate hunger there for good?

Moyo: We need to say: "Fine, we'll help you, but what are you doing yourself to prevent future famine?" After all, the West also monitors strict austerity measures in Greece and demands reforms. But we don't demand anything similar in Africa, which is why one can be sure that there will be another famine somewhere there next year.

SPIEGEL: Catastrophes like the one in Somalia are one thing. But don't you think Africa needs long-term aid programs to get its problems under control?

Moyo: I'm opposed to continuing to automatically pump billions into Africa each year in the form of cheap loans and budgetary assistance. This money has bred dependence and inflation; it doesn't allow people to ever really become productive. The West has been reliably supplying aid for 40 years. But, even so, Africa continues to have poor infrastructure, bad education and a lousy health-care system. Poverty has actually increased since development aid started being supplied. In 1970, 10 percent of Africans lived in poverty. Since then, that figure has grown to roughly 50 percent.

SPIEGEL: Why haven't African governments been able to put to good use the roughly $2 trillion (€1.45 trillion) that has flowed into their coffers over the last 50 years?

Moyo: Because this aid has hardly ever been tied to conditions. Donor countries allow African leaders to put this money in Switzerland, only to go shopping with it later on the Champs-Élysée.

SPIEGEL: Why doesn't anybody rebel against the corrupt rulers in Africa?

Moyo: Why should we normal Africans call our elites to account when people keep coming from the West and saying: "Don't worry. We'll keep paying no matter what you do with the money." An African president once said to me: "You can do what you want. You can swindle. You can kill your own countrymen. As long as there is hunger and disease where you are, the West will take care of you." That's why African governments steal and swindle.

SPIEGEL: You would prefer to turn off the money tap?

Moyo: I have never said that one should put a stop to development aid overnight. But we need a phase-out program within a well-defined time frame. Given the global economic crisis, the willingness to provide aid will decrease no matter what. After all, who can demand from highly indebted countries like Greece or Italy that they send development aid? In this way, your financial crisis is our opportunity: It could force Africa to finally take responsibility for itself.

SPIEGEL: Still, Western aid has done a lot to help some Asian countries.

Moyo: One can maybe say that for South Korea, but not for India anymore. A green revolution is what brought about progress there ...

SPIEGEL: ... in the form of the cultivation of better types of wheat and rice with the help of American experts.

Moyo: The fundamental difference between Asia and Africa is this: Aid programs like the one for South Korea were limited; they ran for a foreseeable period of time. South Korea knew it would have to stand on its own two feet before long. In Africa, politicians have gotten used to assuming there will always be aid.

SPIEGEL: Now it's the Chinese who are making inroads on the continent. Though they are investing in the commodities and food sectors, they care very little about the environment and not at all about human rights. Doesn't that disturb you?

Moyo: The Chinese don't want to impose either democracy or their religion, and they aren't driven by a feeling of guilt about colonialism. They're coming in the name of China. They need copper and oil. Many Africans love them because they build streets and stadiums and create jobs. That's the progress that the West has repeatedly promised us over the last 40 years but never really delivered.

SPIEGEL: The Chinese rely on corrupt elites more than ever.

Moyo: They aren't perfect. But they also haven't done anything that Western countries haven't done themselves over the last 40 years. It would be better if the West stopped warning Africans about the Chinese.

SPIEGEL: What's happening in Africa now is a type of land-grab. Major corporations -- and particularly Chinese ones -- are buying up land at dumping prices and then growing corn and grains on it for export. But the Africans themselves continue to starve.

Moyo: That's not a landgrab; that's investment. The Europeans should open up their markets so that we Africans can sell our products. But the European Union and the United States subsidize their agricultural so that African products have no chance there.

SPIEGEL: Where are Africans supposed to get money if development aid dries up?

Moyo: They should get a credit rating to show that they want to be fully integrated into global financial markets. As a second step, they could issue bonds. The financial market would penalize those countries that failed to redeem them later.

SPIEGEL: How realistic is it to expect that American retirement funds or German insurance companies will someday invest their money in Liberia or Malawi?

Moyo: Sixty percent of Africans are younger than 24 years old. They are burning to become part of the global Facebook-Twitter community. They want to have plasma TVs like young people in Europe. Africa is a market. The West is missing its chance here.

SPIEGEL: We're talking about a continent on which there is war, murder and rape in many places.

Moyo: Much of that is exaggerated. What are the images we get about Africa from TV? Usually it's just flies on the face of some starving child in Somalia. Have you recently heard any good news coming out of Africa?

SPIEGEL: No one can argue that there aren't all sorts of wars and crises on the continent. Do you really think that market forces can correct the things that have gone wrong there?

Moyo: I believe the market can have a disciplining effect. Whoever governs poorly will be eliminated. If this were the case, investors would have to say: "We won't invest any money in your country until you solve your problems." In that way, Africans would experience what some European countries are going through right now. 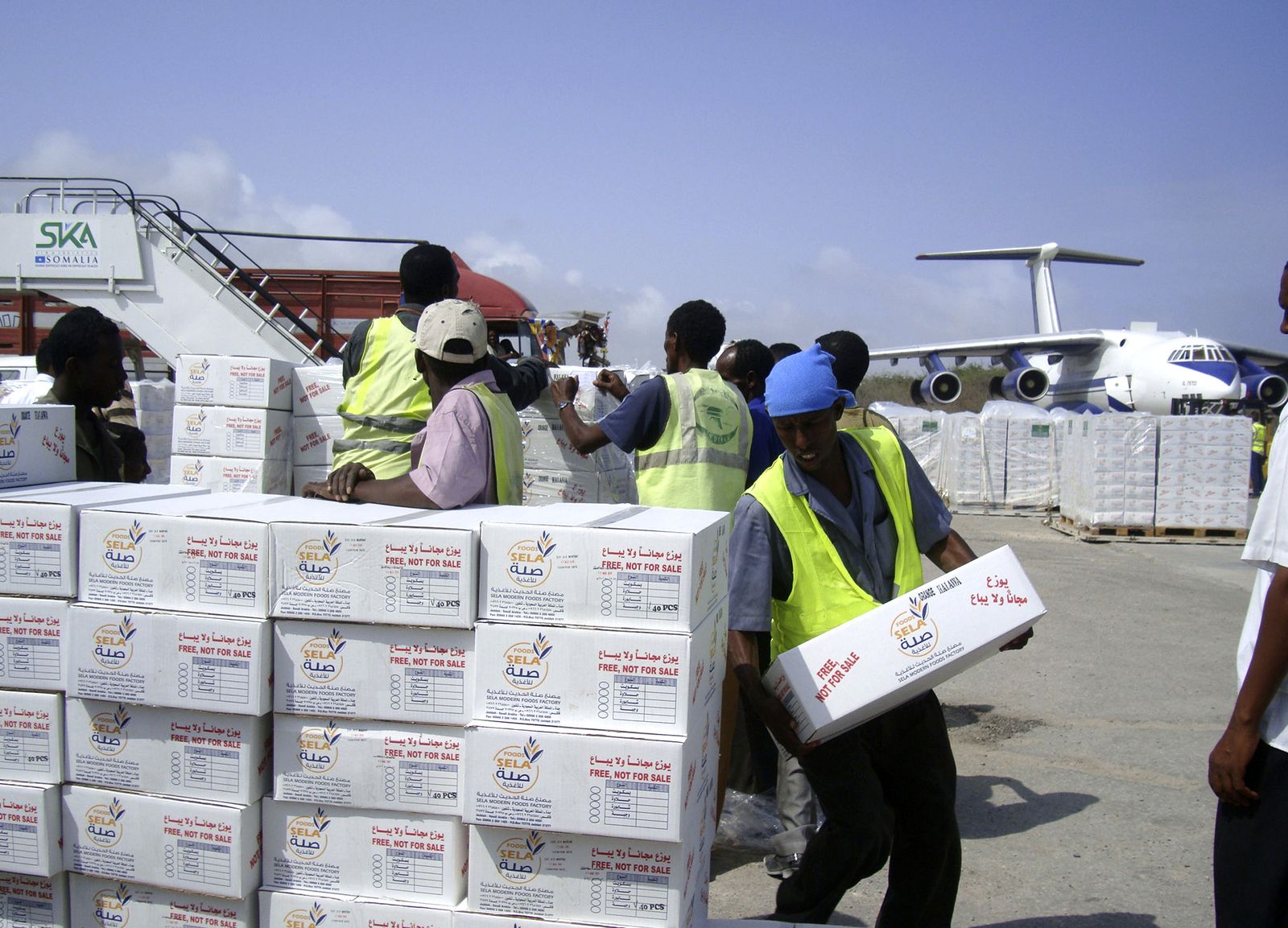 Humanitarian relief deliveries for Somalia: "You financial crisis is our opportunity."