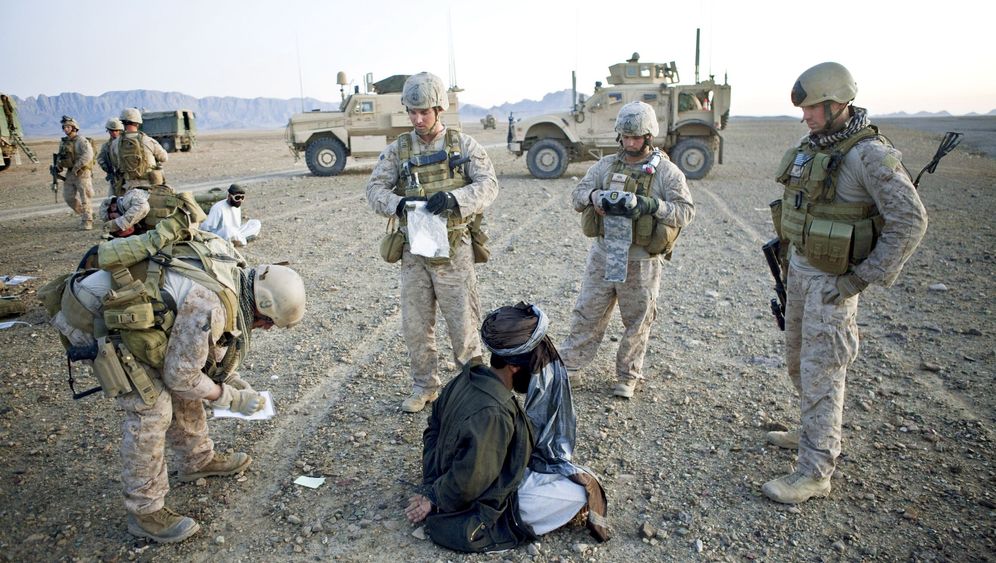 He used to boast about all the "stuff" he had done in Iraq and about how easy it was for an American soldier to get away with almost anything in a war. Sergeant Calvin Gibbs, 25, a native of the US state of Montana, was the highest-ranking member of a group of five soldiers that he allegedly dubbed the "kill team." Gibbs had been in Iraq long enough to know how to impress his fellow soldiers. All you have to do, he told them in December, is "toss a grenade" and you'll have killed a bunch of Afghans. The kill team apparently tossed its first grenade in January.

Now the team faces a military court in Seattle. The five men, who are aged between 19 and 29, are soldiers in the 2nd Infantry Division stationed in the Kandahar region. The men are facing charges of war crimes, including the premeditated murder of at least three Afghan civilians. Seven other soldiers in their battalion have been charged in connection with the conspiracy or with attempting to cover it up. If convicted, they could face prison sentences, possibly even life in prison. The alleged murderers could even face the death penalty.

America has good reasons to be alarmed. Although it is still unclear as to how well-founded the allegations are, the case could have enormous repercussions for the entire country.

It involves more than a court imposing a just penalty for brutal murders, and more than compliance with the military code of honor and the Geneva Conventions. At stake is the reputation of a country that, after eight years under the administration of former President George W. Bush, had set out to liberate itself from charges of moral failure. Indeed, the Seattle case raises the question of whether the United States has really turned its back on the days when it gambled away its reputation with images of naked Iraqis forced to form human pyramids in Abu Ghraib prison.

If the claims made in the indictment are true, the crimes committed by the kill team went beyond the killing of Afghan civilians. In fact, the men allegedly devised "scenarios" for the killings, a kind of script that included plausible pretexts for the murders. Gibbs is believed to have been the planner, while the younger team members did the shooting. The men apparently treated killing as a sport.

They allegedly fired at their victims with gusto, collecting trophies that included finger and toe bones, and even a tooth. The charges outline senseless, horrific acts reminiscent of a former America, an America of waterboarding, torture scandals and Guantanamo Bay. They also raise the question of what exactly has changed since the election campaign in which then-candidate Barack Obama promised so much, including a more responsible approach to warfare and the closing of the military prison in Cuba, an important symbol of America's moral failings under former President George W. Bush.

The "kill team" scandal comes at the worst possible time, with the November midterm elections only two months away, elections that could take a high toll on Obama's Democrats.

So far the crimes in Kandahar appear to be isolated cases, with no indications that anyone sanctioned or even supported the attacks. They are the actions of young hooligans who had lost some of their perspective as a result of the war. In the battalion that includes the "kill team," a total of 33 soldiers have died in combat missions against insurgents. The members of the battalion had experienced the horrors of war, and some of them take drugs, including hashish, to cope. From this perspective, the murders can also be seen as the horrific crimes of crazed soldiers, who are out of touch with reality.

Similar things happened in Afghanistan almost 30 years ago, when the Soviet army invaded the country. Murders, robberies and looting were widespread at the time. Demoralized Soviet soldiers would rob Afghan civilians at checkpoints. Often they would kill their victims, claiming they were mujahideen.

Feeling helpless in their inability to counter the resistance of the Afghans, Moscow's troops turned to drugs and alcohol. Having lost their inhibitions, they committed atrocities they would never forget. In September 1982, a group of Russian soldiers burned 105 villagers alive in an irrigation canal south of Kabul. Women were thrown naked from helicopters. In a particularly horrific incident, soldiers doused a boy in kerosene and set him on fire in front of his parents.

The murders committed by the American soldiers in Kandahar also speak to a broader context. They reflect the general mood, the barbarization that has always accompanied wars that have dragged on this long -- in Vietnam, Iraq and Afghanistan.

'I Need to Be Secretive about This'

When the men of the kill team allegedly attacked their first victim, Gul Mudin, on Jan. 15, it was as if they were shooting at clay pigeons. When they saw Mudin on the edge of a poppy field, Gibbs allegedly ordered one of the soldiers to throw a grenade over the wall and then ordered a younger soldier to open fire. But that was only the beginning. On Feb. 22, Gibbs allegedly shot Marach Agha during a patrol and then placed a Kalashnikov next to the body to make it look like self-defense. More than two months later, on May 2, the team apparently shot its last victim, Mullah Adahdad.

But how much did commanding officers know? What did the army do to investigate the murders? Or did it actually try to sweep the crimes under the table? The father of Adam Winfield, one of the five main suspects, claims that he warned the military leadership months ago. Christopher Winfield says that he received the following Facebook message from his son on Jan. 15, the date of the first murder: "I'm not sure what to do about something that happened out here but I need to be secretive about this."

A month later, on Feb. 14, Adam Winfield wrote his father a note saying that his unit had killed "some innocent guy about my age" who had just been working on his farm. Gibbs apparently later accosted Winfield when he tried to talk to a chaplain and warned him to keep quiet.

The Pentagon has said little about the affair. "That's disheartening to hear if that is indeed the case," a spokesman told the Associated Press when asked about Christopher Winfield's warnings which were apparently not taken seriously. "If someone is trying to reach out (and) head off a potential problem, that's something we need to pay attention to."

NATO is unwilling to comment officially on the incidents. "A criminal investigation is underway," says a spokesman. "We do not comment on ongoing proceedings." Of course, the spokesman adds, the case is extremely regrettable.

News of such atrocities, committed by international troops who are supposed to be bringing stability and justice to Afghanistan, has a particularly serious effect in his country, says Nader Nadery of the Afghan Independent Human Rights Commission. On the other hand, he adds, the investigations against the soldiers in the United States show "that such atrocities do not go unpunished, and that the men must stand trial for their misconduct."

But it isn't exactly comforting that the cases apparently only came to light because a soldier reported to his superior officer that some men in his unit were smoking hashish. He was apparently beaten up by other members of the platoon for doing so.

Of course, the Kandahar case also raises the question of what we really know about the true extent of crimes in wartime, about all the misdeeds that are never reported and all the perpetrators who are never brought to trial. An esprit de corps is taking hold once again. A number of soldiers are already denying that murders were even committed in Afghanistan, insisting that they were merely acts of self-defense.

Jeremy Morlock, the youngest member of Gibbs' team and the main witness for the prosecution, also appears to be reconsidering his testimony. His attorney, Michael Waddington, argues that Morlock's statements should be disallowed because he was allegedly under the influence of prescription drugs when he made them.

According to Gibbs' attorney, his client insists that all of the killings were "appropriate engagements."