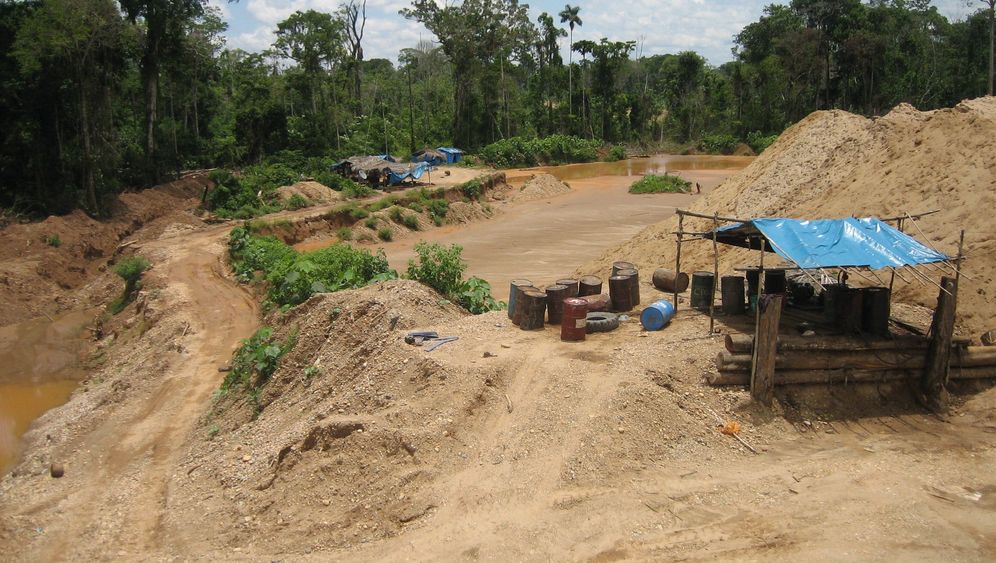 Francisca Hualla is a highland Indian. Her face is tanned a deep bronze and the skin on her hands is raw and cracked. She is wearing a grimy pink sweater and a worn brown skirt. A crumpled black imitation leather bag hangs from a strap over her shoulder -- and she is holding a large lump of pure gold wrapped in newspaper in her hand.

Hualla walks purposefully into a branch office of the Inversur company in Huepetuhe, an elongated collection of wooden shacks in the Peruvian rainforest. An employee offers her a chair and a bottle of Coca-Cola. She is a regular customer. Hualla unwraps her fist-sized treasure and, speaking in broken Spanish, asks how much it's worth. Her native language is Quechua, the dialect of the Incas.

The employee turns the computer toward Hualla to show her the current gold price on the London Metal Exchange, which is flashing on the screen. On this particular day, a gram of gold is worth 104 soles, or about $35 (€28). "865 grams," he says, "a little more than $30,000." The sum represents Hualla's earnings for the month, the result of four weeks of hard work digging in her mine.

Hualla has been prospecting for gold along the Río Madre de Dios, the River of the Mother of God, for 25 years. But in the last three years she has earned more than ever before. "The price of gold has never been this high," she says with satisfaction.

The Quechua Indian is a crisis profiteer. The dollar and the euro are battered, and many government bonds are no longer considered as safe as they once were because of high debt levels in industrialized countries. As a result, the oldest of all investments is experiencing a new comeback. Indeed, the price of gold has almost doubled since the beginning of the global financial crisis in early July 2007.

The demand for the precious metal has triggered a new gold rush in South America. Tens of thousands of fortune hunters and adventurers are now prospecting for "pepitas," the local term for gold nuggets, between the Andes and the Amazon. And nowhere on the continent is as much gold mined as in Peru. The Incas treasured the gleaming metal, and when the Spanish conquistadors came in search of El Dorado, the mythical city of gold, they advanced deep into the Amazon region. They followed the rivers that rise in the Andes and flush the metal into the rainforest in their sediments.

Hualla also followed the trail of gold. She is from Juliaca, a bitterly cold city high in the Andes, at an altitude of 3,800 meters (12,464 feet) above sea level. Her parents grew potatoes and corn, with droughts and freezing temperatures often destroying their harvests. Her family moved to the rainforest when she was 13. "We would have starved to death in the mountains," she says.

As a girl, she used tin plates to wash the sand along riverbanks, often standing in the water for hours at a time. The gold dust she had managed to scrape together by the end of a workday was barely enough to survive.

Volvo Trucks and an SUV

But now Hualla is on the road to becoming a millionaire. She was doubly lucky. First, she happened upon a claim along the river where there was more gold than in the places where she used to prospect. And then the gold price went up.

When the Lehman Brothers bankruptcy shook the world's markets, Hualla bought her first used bulldozer. The gold along the Madre de Dios is often buried several meters underground and can only be dug up with heavy equipment. By the time the Greek crisis came along, she was able to buy two Volvo trucks. And when Spain began to totter, she bought a new Toyota SUV.

Today the matriarch supervises a team of 14 workers. She keeps an eye on things from her shed on the edge of the riverbed. Her youngest children play in the puddles and the eldest is already working in the river. Her husband has leased the adjacent claim. "We would get in each other's way in the same mine," says Hualla.

Once she has collected a kilogram of gold, she places the nuggets into a cake pan and melts them together into a lump over a Bunsen burner. Then she drives to Huepetuhe to sell it.

Huepetuhe is a classic gold prospectors' settlement, complete with brothels, bars and tool shops lining potholed streets. Used bulldozers are parked on the central square, where gold prospectors haggle over the best offers. The drone of dozens of generators fills the air. There is no sewage system and no electric grid. Vultures scavenge in mountains of garbage along the streets.

Piles of Slag to the Horizon

Huepetuhe is the largest of the wild settlements in the Madre de Dios region. New towns are springing up throughout the province. Tens of thousands of Indians come from the highlands to the rainforest along the Interoceánica, a paved long-distance highway, the southern section of which has just been completed and now links Peru with Brazil.

The rainforest is suffering from the sudden onslaught of people. A brownish-yellow lunar landscape has replaced forests once filled with towering trees centuries old. Mud pools and piles of slag stretch to the horizon. The natural environment has been all but destroyed.

"Gold prospecting is toxic for the environment," says Boris Melinc, 63, a descendant of Slovenian immigrants. A broad-brimmed hat shades his sunburned face. A tall, slim man, he is known in the region as the "Gringo." He was a lumber trader for 20 years, and then he rented out trucks and machinery for the construction of the Interoceánica.

A year ago, he acquired a claim on a river bend that had already been exploited once before, in the 1990s. Now he is combing through the site with his heavy machinery and 18 employees. They rinse the mud, which is mixed with water, over sections of velvet carpet, and the gold dust gets caught in the carpet fibers. Melinc extracts about 100 grams of gold a day, which translates into $3,500 in daily proceeds.

His wife Haydee, a neurosurgeon, gave up her job at the University of Lima and now lives with her husband in the rainforest. The couple is planting new trees along the devastated strip of riverbank in an effort to contain the environmental damage. But most gold prospectors pay little attention to the damage they cause. Chinese, Koreans and Russians have staked claims nearby, using high-tech bulldozers to rip their way through the jungle. Those who can afford it smuggle dredgers across the border from Brazil. The heavy machines destroy the riverbed, causing erosion along the banks.

Many bodies of water are now polluted with mercury, which the prospectors use to extract the metal from rock. Most fish in the rivers have become contaminated with the heavy metal.

The government lost control over the gold business long ago. Conflicts are often resolved with pistols, and corruption is rampant. "The police chief in the province owns two dredgers, and even the mayor of the province is digging for gold," complains Environment Minister Antonio Brack. Every few weeks, the minister leaves his office in the faraway capital Lima and flies to the provincial capital of Puerto Maldonado to negotiate with the gold prospectors. The government is not issuing any new prospecting licenses, but hardly anyone is paying any attention. "There is too much money at stake," says Brack.

Along the Madre de Dios river alone, 18 tons of gold, worth about $600 million, are mined each year. It is all but impossible to determine the provenance of the gold. Gold mines on the coast and in the mountains, which have government licenses, secretly buy up the gold from the rainforest and claim that it comes from their own production. Once it has been laundered in this way, the metal is legal and can be exported.

Swiss companies, in particular, are buying up Peru's gold. In 2009, the Andean nation exported almost 60 percent of its gold, worth a total of $6.8 billion, to Switzerland. "The banks pick up the gold bars with private jets and fly them directly to Geneva," says Pedro Solís, the owner of Inversur and one of the biggest gold traders in Madre de Dios. His buyers rush from village to village in battered Toyota pickups to collect the metal. Heavily armed bodyguards carrying pump-action shotguns ride along to guard against holdups.

The branch in Huepetuhe is Solís's largest and oldest office. A furnace in a back room is used to melt down the gold nuggets, including the one Hualla has brought in. A small amount of slag remains in the pot, leaving 855 grams of pure gold, which is 10 grams less than the original weight of Hualla's nugget. She carefully collects the bits of slag in a piece of newspaper and puts it in her pocket, hoping that she can extract a little more gold from the debris. "You have to pay close attention to make sure that they don't cheat you," she grumbles.

She tells the agent to transfer a portion of her earnings to an account in Cusco and collects $1,000 in cash, "for current expenses." She gathers together her skirt, mumbles her goodbyes, climbs into her Toyota and has her driver take her back to her mine. She tells the driver to turn on the air-conditioning. As a native of the mountains, she has even more trouble with the heat than a European.

She says that she plans to continue toiling in the rainforest for "a few more years, until there's no gold anymore or the price drops." Then she intends to move back to the mountains and retire. She will certainly be able to afford it.