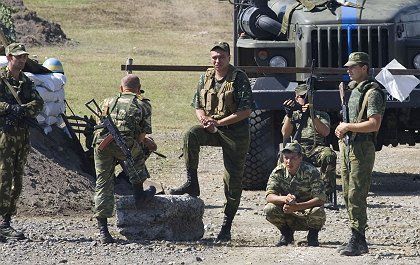 Georgians have protested the ongoing presence of Russian checkpoints like this one outside Poti, Georgia.

A two-day meeting in France of EU foreign ministers will hammer out details of a planned civilian mission to Georgia, meant to press Moscow to remove its troops from provocative positions in the small ex-Soviet state.

The mission would send about 200 EU personnel to monitor compliance with a French-brokered peace deal. It could leave as early as next week, after French President Nicolas Sarkozy is due in Moscow for a meeting with Russian President Medvedev on Monday. Sarkozy -- in his capacity as EU president -- wants to convince Medvedev to pull Russian troops back to positions they held before the five-day August war between Georgia's national army and provincial rebel troops, who were massively supported by Russia.

If the mission fails, the EU needs to be ready to move.

"The aim is for the EU mission to go as soon as it can," said an EU official before the two-day meeting in the French city of Avignon.

EU leaders have already warned Russia that talks slated for September 15 and 16 on a new partnership between Moscow and Brussels would be "indefinitely postponed" if Russia failed to fully comply with the Georgian peace agreement and left its troops in Georgia. But the EU has stopped short of imposing threatened diplomatic sanctions on Russia.

Moscow looks stubborn but isolated in this chess game. It has tried but failed to convince its Asian neighbors to recognize Georgia's two breakaway provinces, Abkhazia and South Ossetia, as tiny independent states. Even Belarus, which has expressed support of Russia's Caucasus policy, has failed to offer recognition to the two provinces. Indeed, far-away Nicaragua is the only other country which has joined Moscow in recognizing South Ossetian and Abkhazian independence.

Still, Russian troops in Georgia are flaunting the French-brokered peace deal. The idea behind a civilian mission is to rob Moscow of an excuse to keep those troops in place. With international monitors in those parts of Georgia, the EU argues, Russia can no longer say its soldiers are needed to maintain peace.

The foreign ministers' meeting in Avignon, which begins on Friday, will also preview an EU summit in Evian next Monday with Ukrainian leaders. Since the brief war in Georgia, Ukraine has become another burning point in Russia's mounting confrontation with the West. US Vice President Dick Cheney has toured the region this week to show American support, but the governing coalition in Kiev is also on the verge of collapse.

Western-leaning leaders in Ukraine want a clear statement from the EU in a treaty to be signed at the Evian summit that Ukraine can expect membership in the European club in the not-so-distant future. But the EU has so far stopped short of offering Ukraine a clear "European perspective" -- language that would imply full support for membership.

The lack of European unity on Ukrainian membership might be seen as weakness by Moscow, Ukrainian diplomats have warned. The EU so far has agreed on language saying the Evian treaty "leaves open the way for further progressive developments in EU-Ukraine relations," according to AFP, but Kiev has promised not to sign the political chapter of the treaty without clear "perspective" language.