CAIRO/BERLIN -- Egypt's state security apparatus was quite literally a state within a state -- omnipresent, brutal, equipped with immense resources, and uncontrollable. Some of its crimes may now be coming to light. Over the weekend, Egyptian citizens secured secret documents from state security headquarters in Cairo. Shortly before, a fire had broken out in the building. Many in the opposition that helped to topple the Mubarak regime believe it was an arson attack aimed at destroying sensitive files.

Since then, dozens of documents have been posted online. Some appear to be authentic, while others clearly appear to be fakes. Verification of the files is very difficult and manipulation cannot be ruled out. Some of the documents hint at scandalous dealings.

Particularly sensitive are two alleged memos dating from 2005 on what appears to be the letterhead of a "secret political department" of Egypt's Interior Ministry. The documents suggest the regime of fallen President Hosni Mubarak may have ordered the deadly terror attacks in the Red Sea resort city Sharm el-Sheikh on the Sinai peninsula in July 2005.

Dated June 7, 2005, the purported secret document states: "Yesterday at 2:30 p.m., we met with Mohammad H., Osama M., Rafit M. and Siad A and agreed on all the points of the plans for the implementation of Assignment 231 of January 29, 2005. We agreed to focus on three vehicles equipped with explosives, in the area around Naama Bay, so that the first would explode at the entrance to the Mövenpick Hotel, the second … near the hotel and the third in Mövenpick Village, which all belong to Mr. Hussain Salim … We agreed that the zero hour should be on the morning of July 23, 2005."

Attacks really did take place on that morning, at 1:15 a.m., at almost precisely the locations cited in the document, and resulting in more than 80 deaths. A previously unknown al-Qaida splinter group claimed responsibility for the attack at the resort, which is extremely popular with European tourists.

Another ostensible memo relating to "Assignment 231," appears to provide the context for the act. It allegedly reports that a business dispute had broken out between Gamal Mubarak, the son of President Hosni Mubarak, and hotelier Hassain Salim.

Was the Egyptian regime unscrupulous enough to instigate mass murder in order to support the private goals of the president's family? For now, the veracity of the document has not been proven. The fact that the circumstances of the attack and the alleged guidelines in the memo fit together so well could be seen as an indicator for either scenario: that the document was forged, or that it is real.

Nevertheless, it would be extremely unusual for a secret service to put an assignment like this in writing. On the other hand, though, who would fabricate a document like that -- why, and on whose behalf? It appears that only state security service insiders, with the help of historians, will be able differentiate between the real and forged documents -- and that work might have to come at a much later date. This uncertainty also applies to the remaining findings, that nevertheless were published. But, in part, they are clearly more plausible. "Mubarak's Gestapo," the name given by the opposition press for the secret service, was involved in criminal activities on all levels.

One example was the sham parliamentary elections in 2010. In those elections, the ruling party, National Democratic Party (NDP), emerged with 97 percent of the vote; attempts to defamethe Mubarak opponent Mohammed ElBaradei and candidates running for president was achieved; carefully planned physical intimidation of well-known opponents to the regime was carried out, as was the safeguarding of illegal transactions involving influential politicians on the ministerial level.

According to preliminary information, it appears high-ranking government officials with close proximity to Mubarak's son Gamal used the power of the secret service for their own purposes. The illegal, but most profitable, usurpation of state-owned land and the lucrative misappropriation of potentially fertile land along the desert highways between Cairo and Alexandria and Cairo and the Suez Canal -- that were supposed to be used to advance urgently needed expansions to agricultural farmland -- all of that would not have been possible without the "cooperation" of the feared agency of oppression.

Work Begins in Dealing with Past

First in Alexandria, then in the large cities along the Nile Delta, such as Damanhur and Kafr el-Sheik, and in the regional capitals, fearless demonstrators succeeded in occupying the branch offices of the secret service, and secured numerous documents detailing the machinations and crimes of the hated agency.

It will only be possible to determine the size of the spoils after a difficult period of stock-taking -- not least of which because the officers responsible either had the compromising documents burned or shredded, often at the last minute. Given the scope of the spying against the country's residents, with the use of the most modern bugging systems and bestial torture, the military's ruling council, as the country's highest authority, moved to dissolve the state security apparatus after Mubarak's forced resignation.

The army has also requested that Egyptians return documents or, at least, not publish them. Indeed, lists are circulating with names of supposed informants that have not been blacked out -- a development that could have devastating consequences for those in question. Even opponents of the Mubarak regime are dicussing the ethics of publishing such documents -- and some are pleading for caution.

What began more than two decades ago far away in in Germany, with the dissolution of the East German Stasi secret police and reunification, now appears to be starting in Egypt. The country is beginning to come to terms with its difficult history under the Mubarak regime. 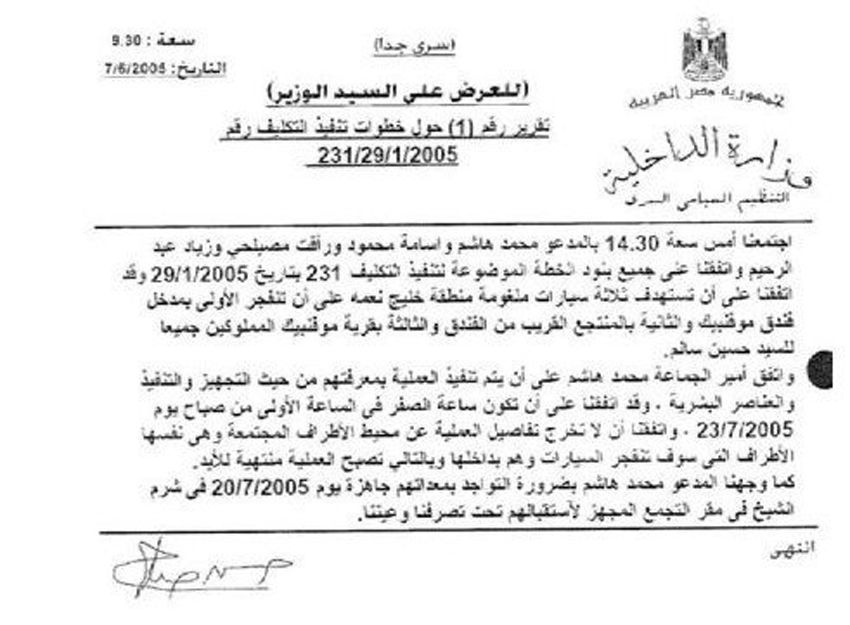 An Alleged June 2005 memo posted on Facebook: Is it real or a fake?