A rear apartment building in Berlin's Wilmersdorf neighborhood; a studio on the top floor; a journey to the past: Art historian Ralph Jentsch holds photos that are more than 90 years old. "Unbelievable," he says. The radiator is still the same, and so is the door. "This is the way it looked when George Grosz painted in this room." 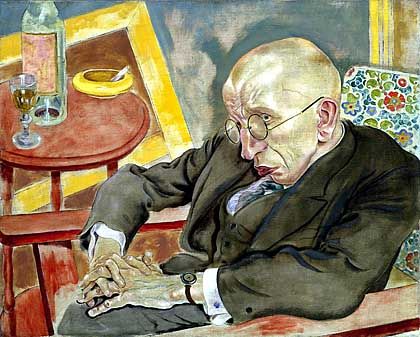 It was in this studio where Grosz, the great expressionist, Dadaist and social critic, created the art that made him world-famous -- paintings and drawings of fat speculators, cynical military officials and extravagant prostitutes, of the maimed victims of war and the emaciated poor. Until 1932, Grosz painted in the studio, with its five-meter (16-foot) ceilings, where an artist from Moscow paints today.

When stormtroopers broke down the door of Grosz's live-in studio on Jan. 31, 1933, the day after the Nazis came to power, the artist and his family were already in New York. "I very much doubt I would have made it out of there alive," he later wrote.

Grosz had consigned most of his paintings and drawings to his art dealer. But the dealer, who was Jewish, also had to flee the Nazis and took only some of the works out of the country. In connection with their campaign against so-called "degenerate art," the Nazis confiscated 285 of Grosz's works in museums, some of which they sold. (Most were burned.) About 70 paintings vanished without a trace. Ralph Jentsch, visibly moved as he looks around in Grosz's former studio, is the managing director of the painter's estate. He wants to "make up for the injustice" that the Nazis inflicted on the artist. He says: "They plunged him into misery."

When Grosz learned that the Nazis had burned a large share of his life's work, his wife Eva wrote after the war, "there was a complete collapse," and he began to suffer from "anxiety, particularly nightmares" and "to drink without moderation." In July 1959, shortly after his return to Berlin, Grosz was found in a stairwell one morning, unconscious from a drinking binge. He died a short time later.

Of course, it's impossible to make up for Grosz's tragedy half a century later. Jentsch knows this. He has spent 20 years assembling a catalog of Grosz's works, a compilation of about 14,000 photos and seemingly endless lists. "At least the stolen pictures should be returned to his family," says Jentsch.

Grosz was a prolific artist. He created about 450 paintings and more than 15,000 works on paper. Pictures from his Berlin days are worth millions today, and Jentsch has traced some of them to prestigious museums in New York, Vienna, Tokyo and Bremen. But their directors are opposed to returning the works to Grosz's heirs. They see themselves as the rightful owners.

This claim, however, is at least up for debate. Since the 1998 Washington Conference on Holocaust-Era Assets, there has been international agreement that works of art stolen or "confiscated as a result of persecution" during the Nazi years should be returned to their former owners. In the Grosz case, this would be his son Marty, 78, who lives in Philadelphia, and his sister-in-law Lillian, in Princeton, New Jersey. The Grosz heirs agree that they do not want to place restituted works on the market. Instead, they hope to exhibit the paintings and drawings confiscated in the Nazi era at a George Grosz museum, and they are considering Berlin as a possible location.

Grosz has undoubtedly earned a museum of his own -- particularly since not a single art collection in the world contains more than two of the Berlin native's works. This is ironic, because Georg Ehrenfried Groß, as his name appears on his birth certificate, was one of the most prominent German representatives of modernism. His first solo exhibit, in Munich in April 1920, provoked angry criticism. The Bayerischer Kurier newspaper warned against the "witch's cauldron from which this mad, caterwauling brew emerges, in rutting ecstasies of wild, unbridled instincts." It didn't take long before the public prosecutor's office began charging Grosz, a Dadaist and radical provocateur, with insulting the Army of the Reich, disseminating obscene writings and blasphemy.

Not Jewish, but Persecuted

In 1926, Grosz signed a contract with gallery owner Alfred Flechtheim, the most influential art dealer in the Weimar Republic, who also represented Pablo Picasso, Paul Klee and Ernst Barlach. Their business relationship ended when the art market collapsed during the Great Depression, and Flechtheim cancelled the contract in 1931. It was a heavy blow to Grosz. Though museums were buying his paintings, he was chronically broke and depended on Flechtheim's advances. The situation was "grim, at least as far as the (German) mark is concerned," Grosz concluded. "My source of income is gone."

His socially critical art made Grosz, a leftist and pacific, a hated figure of the right. An officer shot at him in a restaurant, but hit a waiter instead. He received anonymous threats on a regular basis, and he once found an iron pipe in his studio with the following note attached: "This is what you'll get, you old Jewish pig, if you continue what you're doing."

Unlike Grosz, Flechtheim, the art dealer, was Jewish. So he was also at risk when the Nazis came into power, and when he fled to Paris in 1933, Flechtheim left at least 70 paintings by Grosz and many more watercolors and drawings in Berlin. Before an insolvency administrator could take over the company, Flechtheim managed to move about half of the Grosz works to Paris, where he tried, unsuccessfully, to sell them.

In a secret "Census of Leading Men of the System Era" compiled by the SS, Grosz was described as "one of the most despicable representatives of degenerate art, who works in an anti-German fashion." The document notes that he was "deprived of citizenship on March 8, 1933." Meanwhile, a despondent Grosz was in New York and didn't know what had happened to the paintings and drawings that had remained in Berlin. The loss made him "sad and angry," says his son Marty.

In late 1952, however, Grosz discovered his painting titled "The Poet Max Herrmann-Neisse" at the Museum of Modern Art (MoMA) in New York, which the MoMA was proudly presenting as a new acquisition. Grosz wrote to his brother-in-law in Berlin: "The Modern Museum exhibited a painting stolen from me (am powerless to do anything about it). They bought it from someone who stole it."

When estate administrator Jentsch and the family's attorney recently negotiated with the MoMA over a possible return of the painting, its attorney coolly noted that the museum considered itself the painting's rightful owner.

David Rowland, a lawyer who specializes in restitution, successfully negotiated the controversial return of the painting "Berlin Street Scene," by Ernst Ludwig Kirchner, one of Grosz's contemporaries. Rowland has proposed declaring the Grosz painting shared property of the heirs and the museum for three years. If the MoMA could not substantiate its property rights within this period, he argued, the painting should go to the heirs. The museum has recently rejected the proposal.

Through painstaking detective work, though, Jentsch managed to trace much of the portrait's adventurous path to New York. After Grosz emigrated it was still at the Flechtheim Gallery in Berlin. In 1937, an art historian named Charlotte Weidler said she had inherited it from Flechtheim. But before he died in exile in London in March 1937, Flechtheim had designated his nephew as his sole heir.

Weidler immigrated to the United States. In 1952 she sold the "Portrait of Max Herrmann-Neisse" to the MoMA through an agent. The museum paid $850 for the work. Today, that's dirt cheap. But before World War II, other Grosz works were unloaded for a fraction of this amount. In 1936 Flechtheim consigned more than two dozen works to Carel van Lier, an Amsterdam art dealer. After Flechtheim's death, van Lier contacted neither his wife in Berlin nor Georg Grosz in the United States, but held an auction instead.

The auction was rigged in advance, and 24 paintings sold for an average of 15 reichmarks apiece -- about €150 ($203) today. Van Lier bought five of the most important paintings himself and re-sold them later for a substantial profit.

The Kunsthalle Museum in Bremen has two of Grosz's works today: the painting "Pompe funèbre," one of the works sold off in the rigged Amsterdam auction, and "Still Life with Okarina," which was seized in Berlin.

Six years ago, Jentsch wrote to Wulf Herzogenrath, the director of Kunsthalle Museum. Herzogenrath still argues today that the paintings were bought at auction in Amsterdam "during peacetime." "Besides," he continues, "they no longer belonged to Grosz, but to Flechtheim."

Other Grosz paintings were dispatched around the world from Amsterdam along similarly serpentine and legally contested paths. "Promenade" is on display at the Bridgestone Museum in Tokyo, and Vienna's Museum of Modern Art insists that it is the rightful owner of the painting "Keepsake -- The Alliance."

Private collectors have proved to be more understanding than, for example, the restitution advisory panel of the Austrian Ministry of Culture. An American brought the painting "Ideas of the Time," which had been hawked in Amsterdam, to the Sotheby's auction house in New York. After Jentsch told the owner of the painting about its history, he returned it for a finder's fee. A similar arrangement is being negotiated with a German-American family that owns the painting "Still Life with Pipe and Okarina."

But Marty Grosz continues to meet strong resistance at museums. "In theory, the Washington declaration on the return of art stolen in the Nazi era is very good," says the painter's son, but in practice, he adds, things are "pretty unfair." And the heirs lack the necessary funds to sue the museums for the return of Grosz's works.

Marty Grosz is becoming increasingly skeptical over whether his dream of a Georg Grosz museum will ever become reality. "Suing would take forever," he says. "By the time the courts decide, I'll be long dead."