Jewher Ilham, 25, is the daughter of Chinese economics professor Ilham Tohti, who was sentenced to life imprisonment for his advocacy of the rights of China's Uighur minority.

She went to the United States on her own in 2013 after her father's arrest at an airport. He had taught at Beijing's Minzu University until early 2014 and was considered to be the last moderate activist working on behalf of Muslim Uighurs in China.

Since his arrest, Ilham has received several prizes on her father's behalf, most recently the European Parliament's Sakharov Prize in December. The Sakharov Prize has been awarded by the European Parliament since 1988 to people or organizations working to promote human rights and fundamental freedoms. The prize is named after the late Russian dissident and physicist Andrei Sakharov and is endowed with 50,000 euros.

DER SPIEGEL: Ms. Ilham, the Chinese government has set up a repressive police and surveillance state in the Xinjiang region, where hundreds of thousands of Uighurs have been interned. In December, the European Parliament awarded your father the Sakharov Prize for freedom of thought. Do you feel the European Union is doing enough on behalf of the fate of the Uighur people?

Ilham: I think this is a start. But there is a lot of room for improvement. I am looking forward to seeing more action.

DER SPIEGEL: What do you expect the EU to do?

Ilham: Publicly condemning the Chinese government's actions is already helpful. But it would be even better if the EU sanctioned Chinese authorities or Western governments that directly support the existence of the concentration camps. One of the reasons these camps exist is that the Chinese government profits from them. If this would end, it would probably help Beijing change its perspective. Putting restrictions on visas for Chinese officials who support the camps would also be helpful. But the EU should not overreach.

Ilham: It would not be ideal to sanction the Chinese government as a whole or to limit all trade relationships between the EU and China. We don't want to create a problem -- we are trying to solve one. That is why measures should be targeted at specific products, companies or officials connected to the camps.

DER SPIEGEL: Some members of the European Parliament are already calling for a ban on the import of products originating from the camps to the EU. But is there a way of safely identifying them in the first place?

Ilham: There are lists of companies that export products made in the concentration camps. Actually, most of the factories in the Xinjiang region are designed for labor camps. But the EU could also give direct help to the victims. People released from the camps no longer want to stay in China and want to find a home elsewhere. And those who have already left China usually have one to 10 family members locked up in camps. A lot of them are heavily traumatized. They are suffering from mental health issues. The EU could offer them some badly needed help.

Ilham holds a portrait of her father at the European Parliament on Dec. 18, where she is seen standing next to parliamentary President David-Maria Sassoli after receiving a human rights award on her father's behalf.

DER SPIEGEL: The Chinese government refers to the camps as "re-education centers," but you call them concentration camps.

Ilham: I know that the term evokes memories of the Holocaust and the death of millions of Jews in the Nazi era. And people have been telling me that what is happening in China is nothing compared to what happened in Europe in the 1940s. But the Holocaust did not take place in one day -- it escalated over the years. And in China, what is already happening is cultural and ethnic genocide. They are eliminating a culture, a religion and a language. And people are actually dying and being tortured in the camps. We have reports from survivors who say that their nails have been pulled out, that they have been raped and that their children have been killed. I really hope things will not become as tragic as in Europe during the Nazi era, but they are already tragic enough.

DER SPIEGEL: During your address before the European Parliament, you said, "History repeats itself. It didn't end well before. It won't end well now."

Ilham: I was referring to any human rights violation in history, the European Holocaust being just one of them. In China, for example, people have suffered tremendous human rights violations during the so-called Great Leap Forward. None of these events have ended well -- they didn't benefit anybody and instead hurt people and governments. I really hope the Chinese government will learn from historic mistakes and revoke their actions.

DER SPIEGEL: You have said the Chinese government has hacked your phone, among other things. Have there been any other actions taken against you?

Ilham: The hacking of my phone and laptop is nothing new. Even before I came to the U.S., there had already been massive interference in our private lives. My father's phone and computer were often hacked. Now I could say: I have nothing to hide, let them hack my phone. But that's not the question -- it is the violation of privacy that is not supposed to be happening to anyone. Luckily, I have not been targeted personally yet, but I do fear they will harm my family, who are still living in China. I am the only one who has made it out. 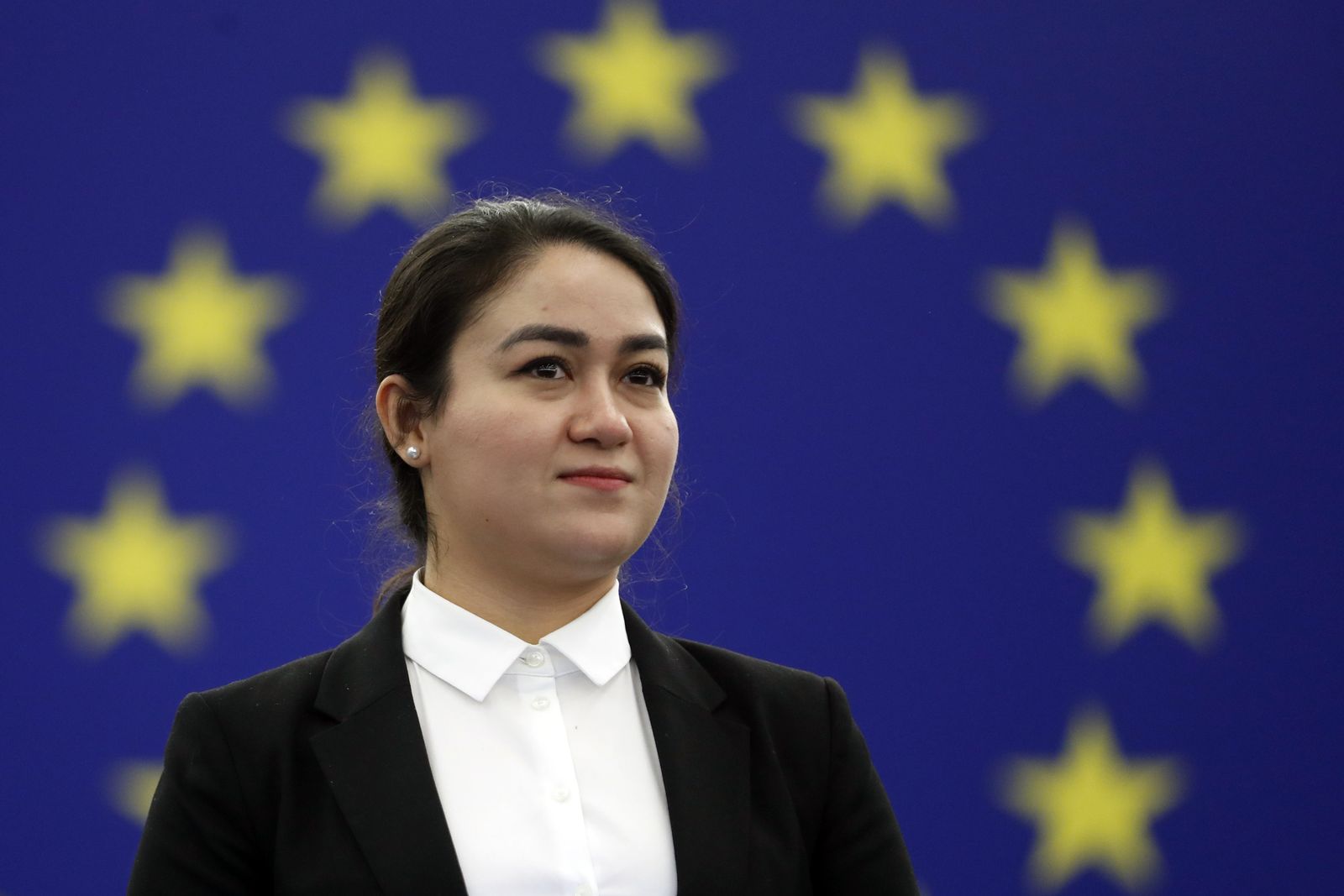 Jewher Ilham: "I am the only one who has made it out." 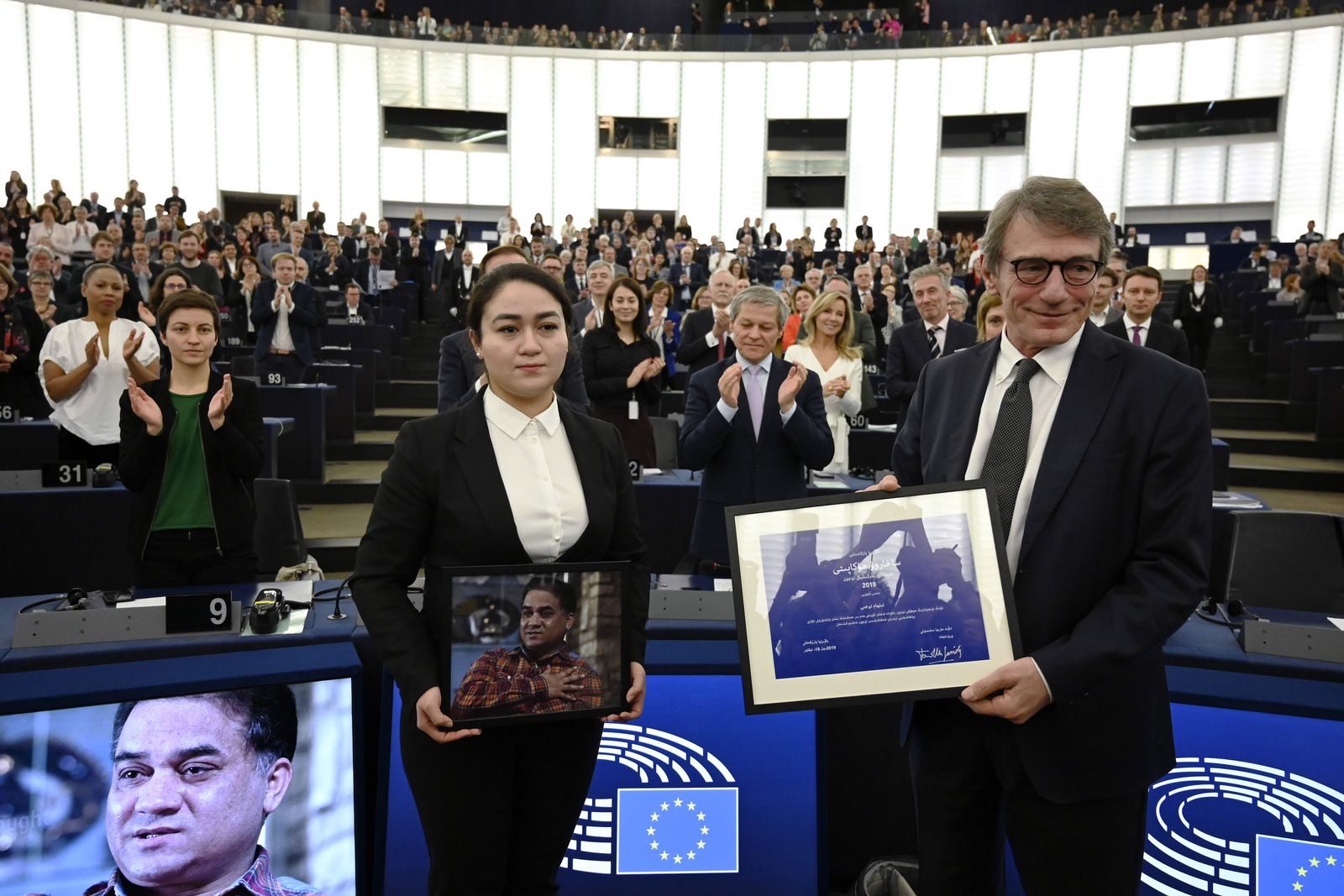 Ilham holds a portrait of her father at the European Parliament on Dec. 18, where she is seen standing next to parliamentary President David-Maria Sassoli after receiving a human rights award on her father's behalf.