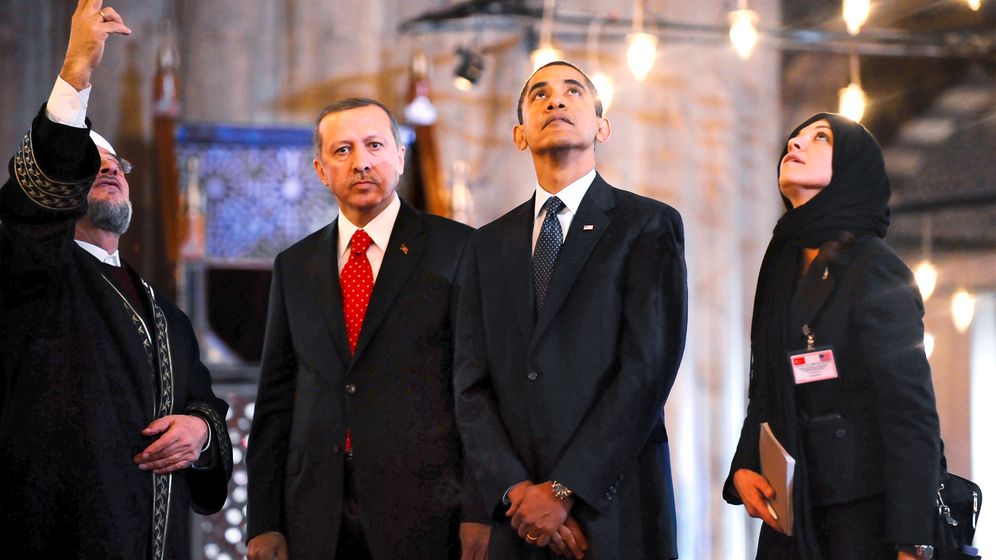 On a December night in 2011, a terrible thing happened on Mount Cudi, near the Turkish-Iraqi border. One side described it as a massacre; the other called it an accident.

Several Turkish F-16 fighter jets bombed a caravan of villagers that night, apparently under the belief that they were guerilla fighters with the separatist Kurdistan Worker's Party (PKK). The group was returning from northern Iraq and their mules were loaded down with fuel canisters and other cargo. They turned out to be smugglers, not PKK fighters. Some 34 people died in the attack.

An American Predator drone flying overhead had detected the group, prompting US analysts to alert their Turkish partners.

The reconnaissance flight -- which was first reported by the Wall Street Journal in 2012 -- and its tragic consequences provided an important insight into the very tight working relationship between American and Turkish intelligence services in the fight against Kurdish separatists. Although the PKK is still considered a terrorist organization by the United States and the European Union, its image has been improved radically by its recent success in fighting the Islamic State (IS) in northern Iraq and Syria. PKK fighters, backed by US airstrikes, are on the front lines against the jihadist movement there, and some in the West are now advocating arming the group and lifting its terrorist label.

Documents from the archive of US whistleblower Edward Snowden that SPIEGEL and The Intercept have seen show just how deeply involved America has become in Turkey's fight against the Kurds. For a time, the NSA even delivered its Turkish partners with the mobile phone location data of PKK leaders on an hourly basis. The US government also provided the Turks with information about PKK money flows and the whereabouts of some of its leaders living in exile abroad.

A Leading Target for Spying

At the same time, the Snowden documents also show that Turkey is one of the United States' leading targets for spying. Documents show that the political leadership in Washington, DC, has tasked the NSA with divining Turkey's "leadership intention," as well as monitoring its operations in 18 other key areas. This means that Germany's foreign intelligence service, which drew criticism in recent weeks after it was revealed it had been spying on Turkey, isn't the only secret service interested in keeping tabs on the government in Ankara.

Turkey's strategic location at the junction of Europe, the Soviet Union, and the Middle East made the NATO member state an important partner to Western intelligence agencies going back to the very beginning of the Cold War. The Snowden documents show that Turkey is the NSA's oldest partner in Asia. Even before the NSA's founding in 1952, the CIA had established a "Sigint," or signals intelligence, partnership with Turkey dating back to the 1940s.

During the Cold War, the US used bases in Turkey primarily to conduct surveillance against the "underbelly of the Soviet beast," as one NSA document puts it. Today, it targets Russia and Georgia from Turkish soil, collecting information in "near real time." Since the outbreak of its civil war, Turkey's neighbor Syria has become a central focus of NSA surveillance.

US secret agents have also provided support to the Turkish government in its battle against the Kurdish separatists with the PKK for years. One top-secret NSA document from January 2007, for example, states that the agency provided Turkey with geographic data and recordings of telephone conversations of PKK members that appear to have helped Turkish agents capture or kill the targets. "Geolocations data and voice cuts from Kurdistan Worker Party (PKK) communications which were passed to Turkey by NSA yielded actionable intelligence that led to the demise or capture of dozens of PKK members in the past year," the document says.

The NSA has also infiltrated the Internet communications of PKK leaders living in Europe. Turkish intelligence helped pave the way to the success by providing the email addresses used by the targets.

The exchange of data went so far that the NSA even gave Turkey the location of the mobile phones of certain PKK leaders inside Turkey, providing updated information every six hours. During one military operation in Turkey in October 2005, the NSA delivered the location data every hour.

In May 2007, the director of national intelligence at the time signed a "memorandum" pledging deeper intelligence support for Turkey. A report prepared on the occasion of an April 2013 visit by a Turkish delegation to NSA headquarters at Fort Meade indicates that cooperation in targeting the PKK "has increased across the board" since the signing of the memorandum. That partnership has focused overwhelmingly on the PKK -- NSA assets in Turkey collected more data on PKK last year than any other target except for Russia.

It resulted in the creation of a joint working group called the Combined Intelligence Fusion Cell, a team of American and Turkish specialists working together on projects that included finding targets for possible Turkish airstrikes against suspected PKK members. All the data for one entire wave of attacks carried out in December 2007 originated from this intelligence cell, a diplomatic cable from the WikiLeaks archive states.

The deep working relationship has continued under Barack Obama's presidency. In January 2012, US officials proposed supporting Turkey in their fight against the PKK with diverse measures, including access to a state-of-the-art speech recognition system that enabled real-time analysis of intercepted conversations. The system can even search for keywords and identify the person speaking if a voice sample of that individual has been stored.

The NSA offered to install two such systems for Turkey's intelligence service. In exchange, the Turks would provide voice samples for a number of Kurdish activists. Given its close and enduring relationship with the NSA, agency authorities wrote that they saw little risk in providing the technology. The only thing NSA experts didn't feel comfortable entrusting to Turkey was the automatic keyword search function.

The partnership is managed through the NSA's Special Liaison Activity Turkey (SUSLAT) office, which is based in Ankara. In addition to data, the Americans provide their Turkish partners with complete interception systems, decryption assistance and training.

Using its internal "Follow the money" reconnaissance unit, the NSA also tracks PKK's cash flows in Europe. The Turks reciprocate by providing the US agents with written transcripts of telephone calls made by PKK leaders as well as intelligence insights about Russia and Ukraine.

At the same time, however, Turkey is itself the target of intense surveillance even as it cooperates closely with the US. One NSA document describes the country bluntly as both a "partner and target." The very politicians, military officials and intelligence agency officials with whom US officials work closely when conducting actions against the PKK are also considered legitimate spying targets by the NSA. To that end, in addition to the official SUSLAT liaison office and the intelligence workers it has cleared with the Turkish authorities, the US has two secret branch offices, operating Special Collection Service listening stations in both Istanbul and the capital city of Ankara.

The degree to which the NSA surveils its partner is made clear in the National Intelligence Priorities Framework (NIPF), a document establishing US intelligence priorities. Updated and presented to the president every six months, the NIPF shows a country's "standing" from the perspective of the US. In the April 2013 edition, Turkey is listed as one of the countries most frequently targeted by Washington for surveillance, with US intelligence services tasked with collecting data in 19 different areas of interest.

The document places Turkey at the level of Venezuela -- and even ahead of Cuba -- in terms of US interest in intelligence collection. Information about the "leadership intention" of the Turkish government is given the second-highest priority rating, and information about the military and its infrastructure, foreign policy goals, and energy security are given the third-highest priority rating. The same framework also lists the PKK as an intelligence target, but it is given a much lower priority ranking.

Beginning in 2006, the NSA began a broad surveillance operation -- a joint effort by several NSA units -- aimed at infiltrating the computers of Turkey's top political leaders. Internally, officials called the effort the "Turkish Surge Project Plan." It took six months for the team to achieve its goal. One document celebrates the discovery of the "winning combination" and reports that collection had begun: "They achieved their first-ever computer network exploitation success against Turkish leadership!"

It goes without saying that the US intelligence services also had Turkish diplomats in their sights, particularly those stationed in the United States. A classified document from 2010 states that the NSA surveilled the Turkish Embassy in Washington under a program codenamed "Powder." A similar project for monitoring Turkey's representation to the United Nations carried the name "Blackhawk."

Analysts had access to the telephone system in the Turkish Embassy and could tap content directly from computers. In addition, they infected computer systems used by the diplomats with spyware. The NSA also installed Trojan software at Turkey's UN representation in New York. According to the NSA document, it even has the capability of copying entire hard drives at the UN mission.

The NSA shared many of its spies' insights with its "Five Eyes" partners -- the British, Canadian, Australian and New Zealand intelligence services. Within that group, the British had already developed their own access to Turkey, with its GCHQ spy agency monitoring political targets in Turkey as well as elements in the energy sector.

One classified British document states that in October 2008, GCHQ tasked agents with improving access to the Turkish Energy Ministry (MENR) as well as enterprises including the Petroleum Pipeline Corporation (BOTAS), the Turkish Petroleum Corporation (TPAO) and the energy company Calik Enerji. The assignment also included a list of the names of 13 targets, including then Turkish Energy Minister Hilmi Güler.

In 2008, GCHQ analysts began reviewing satellite images of the rooftops of ministries and companies to assess what types of communications systems they were using and the possibilities for infiltrating them. The documents do not indicate whether those efforts bore fruit.

Turkish Finance Minister Mehmet Simsek is also explicitly named as a GCHQ "target," despite the fact that he is a dual Turkish-British citizen. Nevertheless, a surveillance order against him includes, among other things, two mobile phone numbers as well as his private Gmail address. When questioned by SPIEGEL reporters, GCHQ officials said they do not comment on the details of operations.

When The Guardian newspaper ran a short story last summer about a planned spying operation against the Turkish finance minister on the occasion of his visit to London in the run-up to the G-20 summit in 2009, officials in Ankara were so angered that the Foreign Ministry summoned the British ambassador and criticized the "scandalous" and "unacceptable" operation. Contacted for a response to the surveillance operations conducted by the NSA and GCHQ, a spokesman for the Turkish Foreign Ministry said "such things" would only be discussed at the diplomatic level.

The following selection of NSA and GCHQ documents pertain to intelligence relations with Turkey or spying operations against the country. SPIEGEL has redacted them to obscure the most sensitive information.