The two candidates currently attracting the most attention in the American presidential primaries seem to be polar opposites. First, there's self-declared socialist Bernie Sanders, who can pack entire arenas with as many as 20,000 supporters. And then there's a man who claims to possess $10 billion, Donald Trump, who is leading in the broad field of Republicans. The two do, however, have one thing in common: They reject the US campaign finance system. One out of conviction; the other because he has the resources to finance his own campaign.

One, Bernie Sanders, takes pride in stating that he doesn't want rich people's money. Some 400,000 largely middle class Americans have contributed to his campaign so far, donating $31.20 on average. The other, Donald Trump, proudly announced recently that he had rejected a $5 million donation from a hedge fund manager. And that he is prepared to pump $1 billion of his own wealth into the campaign. One of Trump's most popular arguments so far is that his rival Jeb Bush has managed to raise over $150 million. "Jeb Bush is a puppet to his donors," Trump says disparagingly. Sooner or later, he argues, they will call in their favors. "I don't owe anyone any favors." It's a message that is proving popular with potential voters. But is it really any more democratic that a billionaire can buy his own election instead of allowing himself to be bought by others?

Two fatal developments are converging during this election in the United States. The decoupling of the super-rich from the rest of society is an accelerating trend in recent years. And also the consequences of a series of rulings by the Supreme Court in 2010 that enable politicians and support groups to accept unlimited donations. This confluence of events is undermining the development of the world's proudest democracy.

The distribution of wealth in the United States is getting absurd, with the popular image of a widening gap between the rich and the poor already outmoded. The emerging chasm is so enormous it can be described as being no less than a gulf. The debate in Germany over the growing divide between the highest echelons of society and the lowest pales by comparison.

The idea that free markets will ultimately create the best possible living conditions is, of course, a wonderful one. But the reality in American looks like this: The yearly income of a typical middle-class family has fallen by almost $5,000 since 1999. If you factor in inflation, male workers last year earned on average $783 less than they did 42 years ago. For the country's richest, on the other hand, things are going swimmingly. The highest 0.1 percent possesses almost as much wealth as the lowest 90 percent taken together. The family of Sam Walton, founder of supermarket chain Walmart, has amassed over $149 billion in wealth. The family possesses as much as all of the lowest 42 percent of the country combined.

The American Dream Is Broken

Indeed, the super-rich are the only people who have profited from the considerable economic growth in the US in recent decades. Since the last Wall Street collapse in 2008, 58 percent of the income gains have been in the top one percent of earners in the US. In 2013, the top 25 hedge fund managers in the country enjoyed more than $24 billion in earnings -- the total amount earned by 533,000 teachers at public schools. Of course, acceptance of differences is part of this country's collective mentality. And Americans are much more willing to admire the success of their neighbors than their counterparts in Germany might be. But even by American standards, the shifts that have taken place in recent years are grotesque. They are destroying the moral fabric of society. The old chestnut that anyone can make it to the top, once known as the "American Dream," rings hollow today. Socialist Sanders and billionaire Trump both say the American Dream is broken.

With the exception of Sanders, however, not a single one of the current candidates for president is willing to call for an increase in taxes -- not even for the top 0.1 percent. In fact, most are promising tax breaks -- and this, despite the fact that many companies don't even pay taxes, because they conceal their earnings. Billionaire Warren Buffet admitted not too long ago that he is subject to a lower tax rate than his own secretary.

The fact that few politicians seek to change the situation has much to do with America's second major problem. The super-rich are donating more than ever before to individual campaigns. It's a calculated move and not out of any kind of love for democracy. The fact that there are now few limits and no caps on the amount of money they can give to the "Super PACs," as the "political action committees" supporting the candidates are called, is a result of the 2010 ruling in the Citizens United v. the Federal Elections Commission case in the Supreme Court. The high court ruled that political donations to be a form of freedom of expression. The five members of the court appointed by Republican presidents ruled that donations cannot be capped. The four justices appointed by Democratic presidents dissented. The ruling is the most devastating in recent US history and also threatens its democracy.

The effects of this ruling are now becoming visible for the first time, with donations from the super-rich increasing radically. In the first six months of this year alone, the candidates and their Super PACs received close to $400 million -- far more than in the entire previous campaign. The most conspicuous aspect, though, is that around half this money originates from a small group of massively wealthy families and the companies they own.

Republican Ted Cruz, for example, received $10 million from an oil billionaire and $11 million from a hedge fund manager. Of the $16 million in total donations that have flowed into Marco Rubio's Super PAC, $12.5 million has come from four individual donors. These millions are the ones that can determine the outcome of elections. The money enables candidates to afford armies of paid campaign staffers and thousands of TV ads.

Candidates seeking to rely on small donations stand little chance in this cutthroat new environment. Ironically, supporters of the new rules are fond of pointing to Barack Obama's successful 2008 campaign. They argue the campaign showed that small donations can indeed make a candidate competitive and that it can work. But that was prior to the Citizens United ruling. In the end, Obama was also the beneficiary of the largesse of Wall Street's super-rich, and their calculating donations to the Democrats. In the wake of the banking crisis, Obama refused to subject Wall Street to tighter long-term regulations and also made key appointments in his administration to representatives of Goldman Sachs or Citigroup, the main culprits in the crisis.

The arch-conservative Koch Brothers alone, whose estimated assets of $120 billion make them America's second-richest family, want to invest $889 million in the current election campaign. That's more money than the Democratic and Republican parties can raise together. The Kochs are investing in a targeted manner in individual candidates rather than parties. That makes their influence even more binding because it creates concrete dependent relations. They have also built a database that creates precise profiles of some 250 million Americans. They even have their own polling unit, telephone campaigns and marketing units for testing political messages. With this sheer power, it wouldn't be off the mark to describe the Kochs as America's most powerful political party.

The ability to exercise political influence rises in proportion to wealth, which in turn further cements America's economic divide. By their very nature, most of the super-rich in the US oppose increasing taxes for the super-wealthy. They also reject a dignified minimum wage, a statutory healthcare system and public universities. They are against just about anything that might help the bottom 90 percent to rise.

Given that the economic and political direction of the country is being steered today by a small number of billionaires, the United States has taken on many of the characteristics normally associated with oligarchies. "We've seen a complete subversion of our political system," former President Jimmy Carter recently said, diagnosing the ailment. He said that unlimited money in politics "violates the essence of what made America a great country in its political system. Now it's just an oligarchy with unlimited political bribery being the essence of getting the nominations for president or to elect the president."

The race suits worn by Formula One drivers are littered with patches with the names and logos of sponsors covering the chest and arms as well as the helmet. If Jeb Bush, Hillary Clinton or Ted Cruz were to wear something similar in the future, at least there would be some transparency. But it's highly unlikely they will do anything of the sort, because precious few in the United States are rebelling against the billionaires' power. A popular revolt against the power of the happy few -- and remember, "revolution" is a bad word in the US -- is nowhere in sight. Not even Donald Trump could be counted on to lead a movement like that. He's simply too rich. So it's not without irony that this über-oligarch himself, a man who spent decades trying to buy favors from politicians, is now presenting himself as being above the swampland of campaign finance. "Nobody knows the system better than me. I was the system," he has said. As an entrepreneur, Trump says he gave money to most politicians. Two or three years later, he says, when he had an issue of concern, they would pay back their debt by returning a favor.

It's seldom that politicians get off as easily as Hillary Clinton did. During the first Republican televised debate, Trump revealed he had contributed to Clinton. "With Hillary Clinton, I said, 'Be at my wedding,' and she came to my wedding. You know why? She had no choice! Because I gave," Trump said.

It may turn out that Trump is doing his country a major service with his candidacy because he is demonstrating very vividly what is rotten about this system. With all due respect, he's a useful idiot. 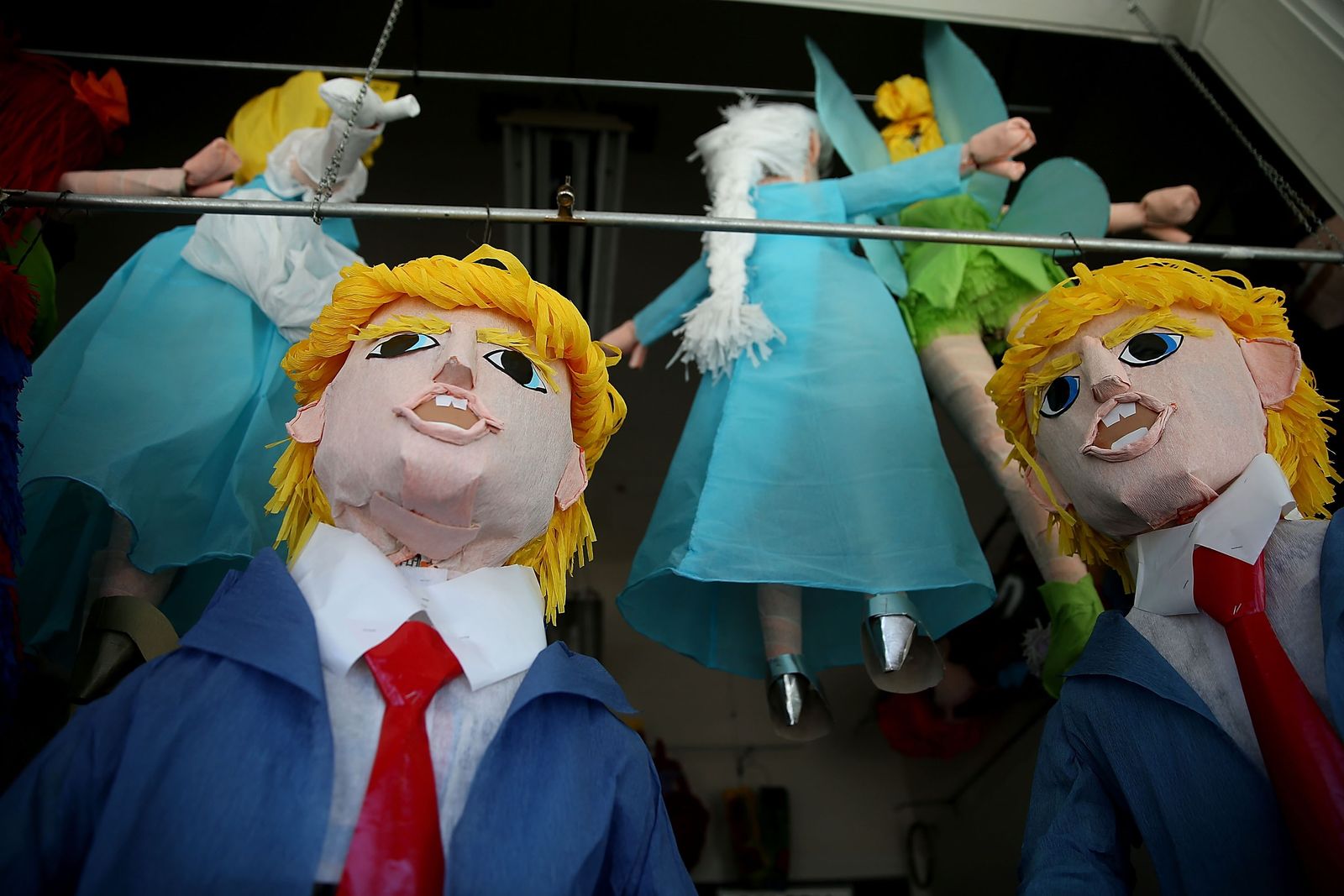 Poking fun at the über-oligarch: Donald Trump pinatas are displayed in the window of a store in San Francisco's Mission District.