It would be hard to top the insults that Republican presidential candidate Donald Trump has unleashed on female journalists. Trump is a chauvinist who can't tolerate criticism from self-confident women. But these reporters are only his most prominent victims. Trump has demanded the removal of debate hosts, he has sued TV channels and during his appearances, journalists regularly become the target of verbal attacks. At almost every one of his rallies, there is a moment when he pauses, points to the journalists squeezed behind the press barriers, and says: "Those are miserable people!"

The longer this election continues, the more apparent it is becoming that this candidate is changing the fundamental relationship between the media and the American political world. The democratic public sphere, one of the pillars of every democracy, is facing two threats: Trump's brute attacks and the media's own failure. Many newsrooms didn't fulfill their democratic duty to monitor Trump, and to perform checks and balances, letting him get away with insults, lies and far-fetched promises. When it comes to Trump, the critical public sphere has shown itself to be dysfunctional far too often in the last few months.

Trump maintains a schizophrenic relationship with the media. On the one hand, he exploits it in order to spread his message and propaganda. On the other, though, he has nothing but contempt for journalists. He would even like to restrict press freedom, most recently through a proposal to strengthen libel laws by raising financial penalties so high they could put entire news organizations out of business. The proposed legislation could be described as a weapon directed at Trump's critics -- he's even explicitly named the New York Times and the Washington Post, two of the American newspapers who are going after him the most aggressively, as targets. The proposal offers a taste of what America would be like under a President Trump. These days, America feels a bit like Hungary.

Trump has also understood better than any other candidate how to harness social media in order to circumvent the critical public sphere. On Twitter he now has 6.7 million followers, and over 1 million on Instagram. The New York Times, in comparison, has a total circulation of about 2 million. Trump recently claimed that having his Twitter account was "like owning the New York Times without the losses." He has made it his policy to entertain his followers regularly, sometimes with over 20 tweets per day, allowing him to create his own stream of news.

The calculus behind this is simple: With Twitter and Facebook, the traditional media have partly lost their function as gatekeepers. Social networks allow direct communication between politicians and the people. Journalists no longer have a monopoly on information and communication. That isn't a bad development per se. The direct communication made possible by the Internet is, of course, technically democratic -- even egalitarian. But it can also result in the loss of the context, the discourse and the fact-checking normally associated with political debate. It also erodes the filtering function of the media. Barack Obama was the first politician to make use of this principle of direct communication during his 2008 campaign, and later during his time in the White House.

But Trump has expanded and perfected this method of circumventing journalists, and thus created his own parallel public sphere, with followers who are all too willing to believe him. And when he has no argument left with which to counter his critics, he can write a terse, mean Tweet arguing that he is merely being attacked by the liberal media establishment. No matter what the media say, if there is any doubt, it is a lie. It is the American version of "Lügenpresse," or "lying press," a slur that has become commonplace during the recent right-wing protests in Germany.

In his contempt for democratic discourse, Trump has some notable similarities to Russian President Vladimir Putin, who in a way serves as Trump's role model. The Russian once told a French journalist that, if he has so much pity for the victims of the war in Chechnya, he should circumcise himself. It was Trump-speak long before the real-estate tycoon even stepped onto the political stage.

It is no coincidence that Trump treats Russia with kid gloves. He says he has a good personal relationship with Putin, and that the Russian is a strong, impressive national leader. Putin and Trump are united in their loathing of the idea that a critical public sphere is part of a functioning democracy. They want to issue orders to people rather than explain things. This disdain makes them both fundamentally anti-democratic. So far, though, the outcry on the subject in the United States has been weak.

Lots of American media outlets, especially large TV stations, have viewed Trump so far as entertainment. No word is too dirty to be put on the air somewhere, and Trump has a screen presence unlike any other candidate. Former Republican House speaker Newt Gingrich described the mechanics of this election to the hosts of "Fox & Friends," a show on the arch-conservative Fox News channel thusly: "Donald Trump gets up in the morning, tweets to the entire planet at no cost, picks up the phone, calls you, has a great conversation for about eight minutes, which would have cost him a ton in commercial money, and meanwhile his opponents are all out there trying to raise the money to run an ad." Of the show, which long offered Trump a regular platform, Gingrich said: "You could say that Trump is the candidate 'Fox & Friends' invented."

A power dynamic of superiority and subordination has emerged with Trump and some journalists that should not exist in a democracy.

Investigative reporting is one of the fundamental elements of democracy. It exists to bring to light the kind of information the powerful would often prefer to hide. In no other country is this tradition as strong as it is in the US, the home of the Watergate investigation. But when it comes to Trump, investigative journalism has failed. In contrast to, for example, Hillary Clinton in this election, there have been no big, groundbreaking pieces of reporting dealing with his past, his serious financial mistakes and bankruptcies that cost the state and society dearly. About the brutality he displays when people get in his way. About the rumors about his alleged ties to the New York mafia. About his tax returns which, unlike all the other candidates, he has not yet released.

His campaign thrives on his appearance as an all-powerful figure and infallible businessman. One suspects that there is another Trump who operates at the boundaries of that which is allowed, and often beyond it. But the only image of Trump that exists is a distorted one that he created and largely shapes himself. The media hasn't managed to correct that image.

Why? One leading Washington journalist argues that it's because it was not only the journalists, but also the other candidates' election strategists who underestimated Trump. Normally, the managers of each campaign tend to gather as much dirt as they possibly can about their opponents which, when the time is right, they spread. This didn't happen to Trump, he argues, because, like most journalists, the other candidates believed Trump would flame out. He argues that many news organizations only recently truly woke up. Perhaps too late.

Shamefully, it is Fox News, of all places, that has demonstrated that there is a different way of dealing with Trump. The candidate had threatened to boycott a TV debate against his Republican rivals that Fox was going to air shortly before the first caucuses in Iowa. The debate was to be moderated by Megyn Kelly, who had dared to ask Trump critical questions during an earlier debate.

Prior to the debate, the TV channel released a statement lambasting Trump. Trump demanded an apology. If it did not come, he said, he wouldn't take to the stage. Roger Ailes, the powerful head of Fox News, spoke with Trump several times on the phone but didn't apologize, and did not remove his host. Kelly moderated the evening's debate, and Trump stayed away. Four days later, he lost Iowa.

Trump has since figured out the connection between his absence from TV and his result in the caucus. He took part in the next debate organized by Fox in early March. Megyn Kelly didn't hold back, confronting him with quotes from his earlier speeches that contradicted his current positions, and forced him to admit in public that he was politically "flexible." It hurt him.

There is no guarantee that an aggressive confrontation with Donald Trump would lead fewer people to vote for him, or more to recognize his deeply authoritarian style of politics. Fox has nevertheless shown Trump how it could happen. One would hope that the next time Trump agitates against minorities or threatens members of the media, that assembled journalists would turn off their cameras and all leave the premises.

If Trump actually becomes his party's candidate or, even worse, becomes the next president of the United States of America, the damage to democracy would be significant not only because it would turn America into an autocratic nation, but because it would mean that, in this election, the principle of public scrutiny and thus democracy would have failed. 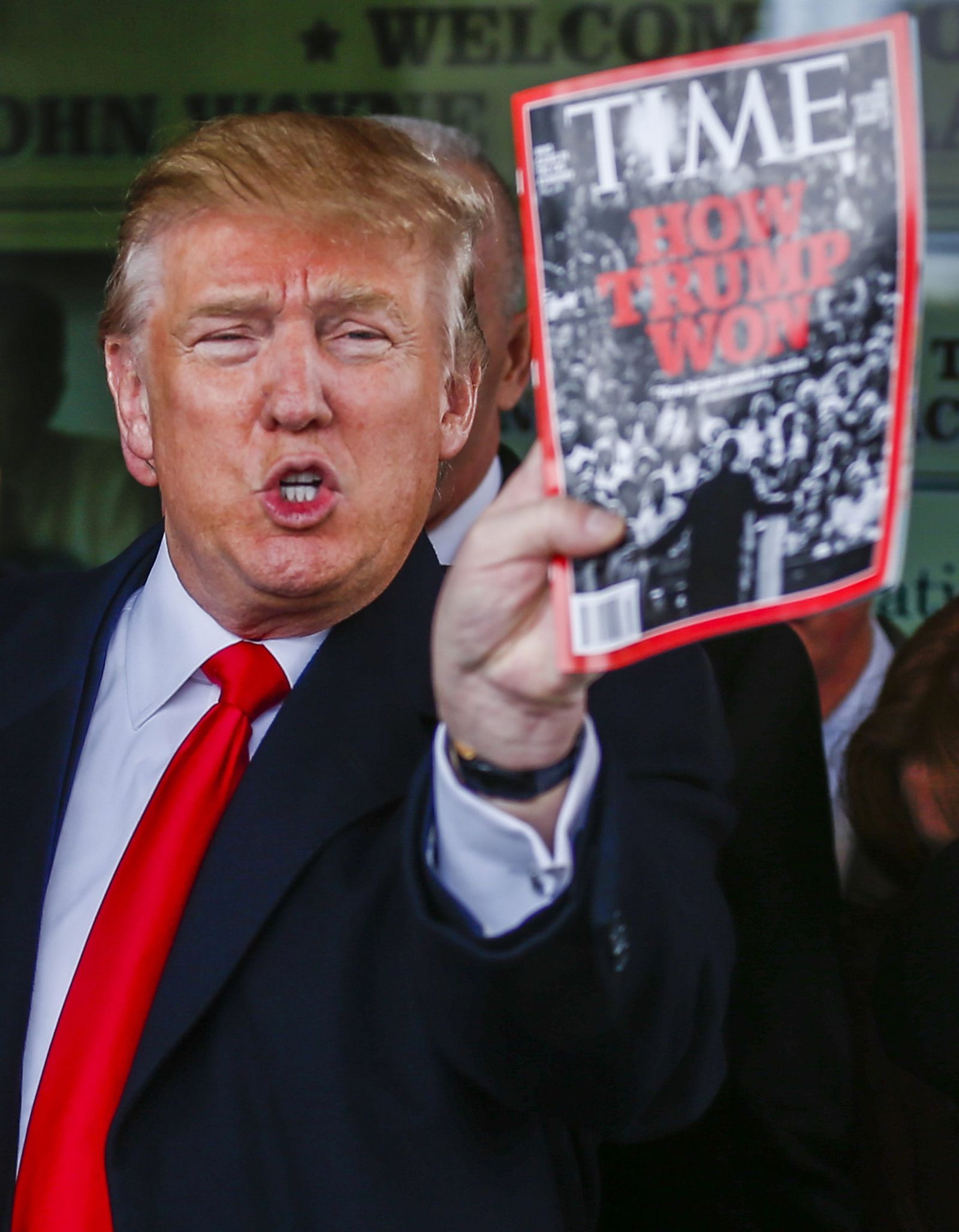 In his campaign, Donald Trump has successfully steered clear of the checks and balances presidential candidates are usually subjected to.