Ultimately, indifference is deadly. The apathy. The feeling of impotence. And the idle silence that follows. People, including journalists, start thinking they can't do anything anyway. That proved to be the case in Turkey and Hungary and it has long been the situation in Russia and China as well. Will it also happen in the United States?

When democracy begins to erode, it seldom happens very quickly. Looking back, one can often determine the moment in which it became serious -- usually it was an election. How could Turkey have elected Erdogan, Russia Putin, Hungary Orbán and how could America have chosen Donald Trump with a clear conscience? When political discourse leads to a situation in which the discourse itself is replaced by demagogy, and when that demagogue is brought to power through a democratic process, then it's possible that democracy itself will be replaced by autocracy.

Everything else then happens slowly. Meanwhile, some media continue day-dreaming and thus become even more obsessive about labeling any person warning against the threat as hysterical.

So there we have it: Donald Trump, a misogynist and a racist businessman who verifiably made 87 false statements in the course of only five days of the election campaign, is no longer a candidate. He's sitting in the White House. Here are three insights about this American president who has been in office since Jan. 20.

It is not at all absurd to assume that, if resistance doesn't mount, this will continue.

Fewer and fewer people are attending protests because, slowly, people are losing interest and a sense of powerlessness is setting in. The media will turn to softer and more entertaining issues because they cause less trouble. Politicians who had at first sworn their resistance will notice that life is easier if they submit. Companies will also obtain contracts when they submit. Many people will become rich and rise in society when they submit. And if they don't do it, they will watch as others do. That's how autocracies form -- "not by diktat and violence," David Frum wrote in The Atlantic magazine, but through "the slow, demoralizing process of corruption and deceit."

At DER SPIEGEL, we first warned against Trump in a cover story at the beginning of 2016. We followed it up with another cover story, "Five Minutes to Trump," seven weeks before the election. We do make mistakes, but underestimating Donald Trump wasn't one of them. On Saturday, we published a cover story illustrated with a caricature drawn by Edel Rodriguez, a Cuban immigrant who lives in New Jersey. The image shows a screaming man without eyes or a nose, but easily discernable as Trump, holding the decapitated head of the Statue of Liberty in one hand and a bloody sword in the other. "America First," it states -- there is nothing more to see or read -- anything else, as with all art, is a matter of interpretation.

"Stunning," wrote the Washington Post. The political magazine Mother Jones described it as "one helluva statement." Demonstrators also used the cover image on posters at protests on the streets of cities across America. "The spectacular cover image is making the rounds here in the U.S. and people are all loving it," novelist Irene Dische wrote to us from New York. We've also been deluged with passionate letters from readers here in Germany, with responses typically going in two directions -- either it's "brilliant" or "that's sick, you should see a psychologist." Some complained the image was far too brutal.

The authority-loving bild.de, the news website of Germany's largest tabloid newspaper, took to Twitter to cleverly criticize DER SPIEGEL. It didn't waste any words on alienation, the caricature or freedom of expression. It instead claimed that SPIEGEL had depicted Trump as an Islamic State terrorist, as if it were some kind of photomontage. This skewed interpretation paved the way for a rabid wave of outrage. But more serious colleagues at media like the Süddeutsche Zeitung and Frankfurter Allgemeine Zeitung also wrote that DER SPIEGEL went too far. Where, after all, can we go from here?

In Kress, a leading media industry trade publication in Germany, journalist Franz Sommerfeld wrote, "If Trump is an emergency, then it's the media's job to ring the alarm in the soundest and most informative way possible, just as the new SPIEGEL cover story has done. That, of course, also includes caricatures and other forms of journalistic confrontation."

What, after all, should we be waiting for?

For Trump to show that he means business? He's already doing that. For him to start his first war?

For the U.S. to fade away, for its people to put up with Trump and to allow a process to start that will ultimately become irreversible?

Donald Trump did not decapitate a person on the cover of DER SPIEGEL, he decapitated a symbol. The Statue of Liberty has served as America's symbol of freedom and democracy since 1886 -- one that welcomes refugees, migrants, "the homeless, tempest-tossed," according to the inscription that it bears. Donald Trump despises and threatens liberal democracy, he despises and threatens the world order and he is the most powerful man on the planet. The emergency is already upon us.

You can also read this story in German . 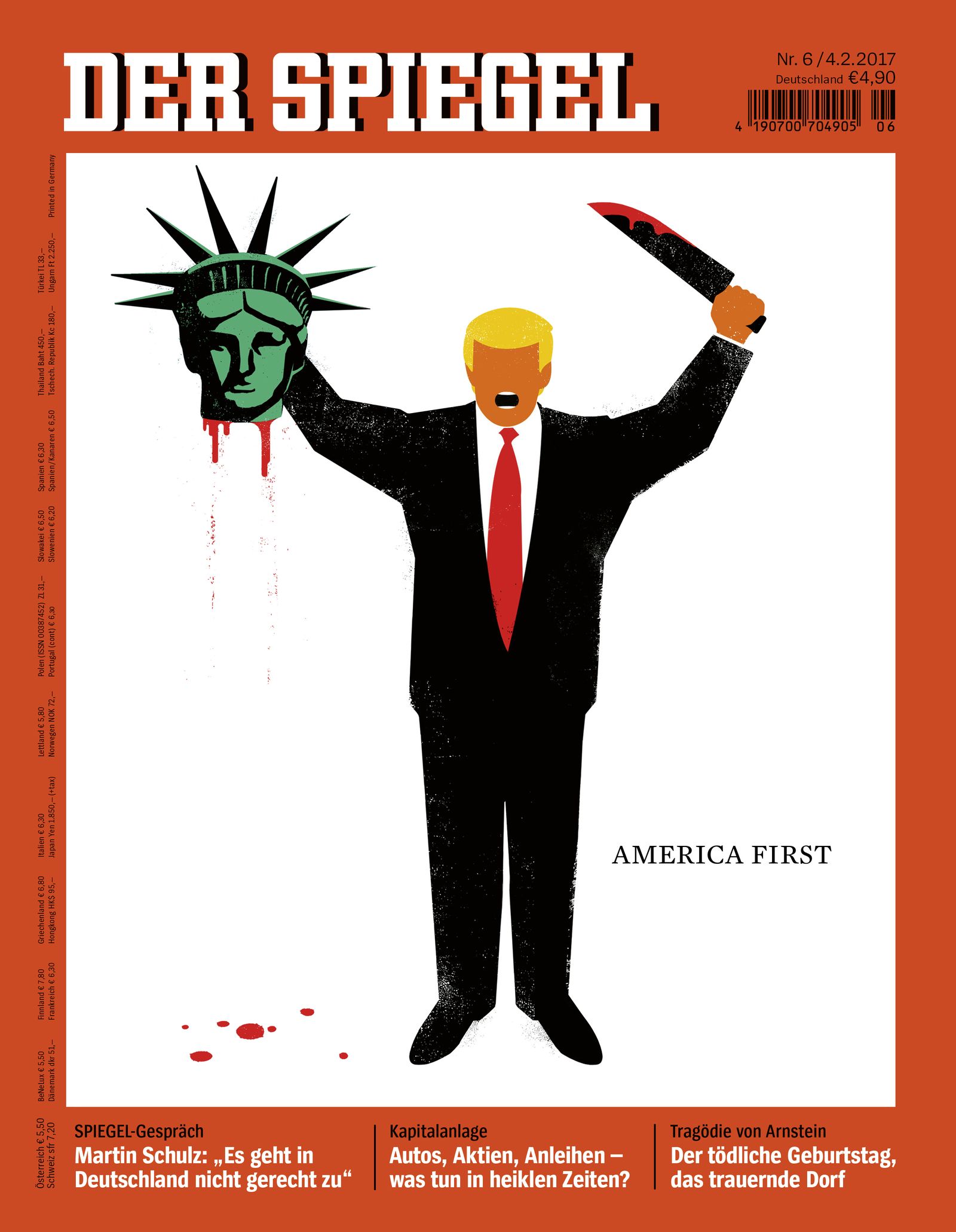 The cover illustration of DER SPIEGEL this week