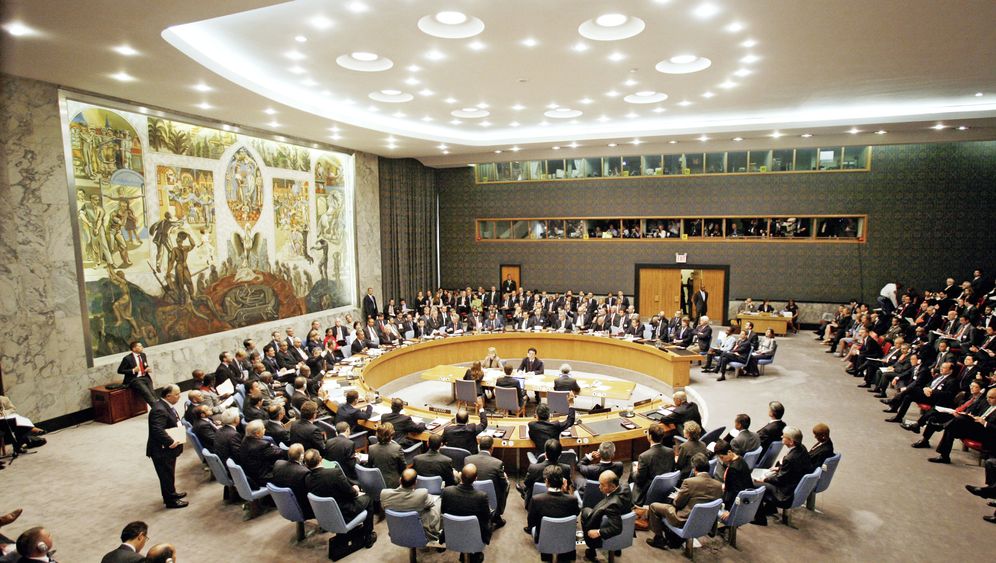 Photo Gallery: A Place on the Council

Peter Wittig is involved in an election campaign. It's something of an unusual pursuit for him, considering he is the German ambassador to the United Nations. Wittig, a quiet man with a keen sense of humor, is sitting in the Deutsches Haus in New York. He describes how he, as a diplomat, goes about drumming up votes. In his case, the votes he needs are those of entire countries.

Next month Germany will attempt, once again, to secure a non-permanent seat for two years on the UN Security Council. For the first time, the German government will be up against two competitors, Canada and Portugal. Eight years ago, only two countries were vying for the two seats allocated to the so-called Western group, and the same situation applied eight years before that.

The two-year seat is the Security Council's economy class, if you will. Unlike the five permanent Security Council members -- the United States, China, Russia, France and Britain -- a non-permanent member has no veto. But Germany is also dreaming of traveling in first class at the UN -- in other words, securing a permanent seat. The vote on the non-permanent seat, which will take place in mid-October, is a small step in that direction.

Just how seriously the German government takes the decision will become apparent next week, when Chancellor Angela Merkel travels to New York, with Foreign Minister Guido Westerwelle following soon afterwards. Both politicians are going to the UN to campaign on behalf of Germany, and to make it clear that they will not be satisfied with the status quo.

Ironically, the two politicians' respective parties, Merkel's conservative Christian Democratic Union (CDU) and Westerwelle's liberal Free Democratic Party (FDP), were once opposed to the Security Council ambitions of Merkel's Social Democratic predecessor, former Chancellor Gerhard Schröder. The effort to secure a permanent seat on the Security Council was viewed as being too nationalistic, the consensus being that a European seat would be preferable.

The government still supports a European seat, at least officially, according to the coalition agreement signed by the two parties after the September 2009 general election. Nevertheless, everyone knows that no German politician is ever likely to see the day when the European Union agrees to accept a joint seat. For this reason, the coalition agreement also states that "in the interim, Germany remains prepared to assume greater international responsibility with a permanent seat on the Security Council."

Wittig has strong arguments in Germany's favor to support his campaign. Germany is the EU's most populous country and the third-largest payer of dues to the UN. German soldiers are part of UN contingents in Afghanistan, in Kosovo and off the coast of Lebanon. A country that is providing so many resources has a strong interest in determining how they are used. Germany's desire for a Security Council seat is not presumptuous, but understandable.

Wittig has only been in office since December, but he has already met with 190 of his 191 UN counterparts. He has explained to them how important it is to cast their votes for the Germans in October, and he has promised that Germany will approach the office with transparency and a sense of responsibility. Wittig's campaign for a non-permanent seat appears to be going quite well.

The question of whether the UN can enact fundamental reforms and expand the Security Council is a different story. Those reforms are Germany's only chance of becoming a permanent member.

The situation is more difficult today than it was when Berlin made its first attempt in 2005, a time when the mood at the UN had hit rock bottom. The organization had failed in Haiti, in Rwanda and in the run-up to the Iraq war. It was clear to everyone that something had to change. The two-thirds majority in the General Assembly which is needed to approve a new Security Council seemed within reach. But in the end the members failed to come to an agreement.

When UN diplomats are asked about the issue today, their responses suggest a mood of resignation. It will be a long process, they say, and it's impossible to tell when the necessary reform will even be feasible. Still, everyone knows that the status quo is untenable. "Not a week goes by without someone addressing the reform of the Security Council," says Robert Orr, the assistant secretary-general for policy coordination under UN Secretary-General Ban Ki-moon.

Orr, who was also responsible for strategic planning under Ban's predecessor, Kofi Annan, is sitting in a somewhat shabby office in a temporary pavilion next to the East River. His regular office is contaminated with asbestos and, together with the rest of the UN building, is currently undergoing renovation. It's a fitting metaphor for the condition of the organization as a whole.

The UN has received serious competition in recent years. It did not play a role in the international financial crisis, when the so-called G-20 nations assumed responsibility for crisis management. Secretary-General Ban Ki-moon did not play a role when the world's most powerful nations came together in Copenhagen in December 2009 to negotiate policies to fight climate change. The UN is no longer as important as it once was, and if it doesn't reform itself it could eventually become politically irrelevant.

'The UN Has to Change, and It Will'

Orr disagrees, of course. "A G-20 climate protection agreement won't buy you much," he says. "We're the only ones who have all countries on board." No organization, says Orr, is as capable as the UN of responding as quickly and efficiently to disasters like the flooding in Pakistan, nor is any other organization as effective in combating global epidemics. And who else would attempt to keep the peace in places like the Democratic Republic of Congo, Sudan or Lebanon? According to Orr, more than 120,000 UN peacekeepers are currently deployed worldwide. Only the United States deploys more military personnel to the field than the UN.

Still, Orr has been in the business long enough to know that the UN's influence will continue to wane without fundamental reform. Why should countries like India or Brazil, whose membership in the G-20 is seen as a matter of course, continue their involvement in the UN if they are only ever granted non-permanent seats on the Security Council? "The UN has to change," says Orr, "and it will."

John Bolton, a former American ambassador to the UN, disagrees. He doesn't believe that the Security Council will ever be reformed, nor does he even see reform as desirable. How is it preferable, Bolton asks, if 20 or 25 members have to reach consensus instead of 15?

Bolton served as US ambassador to the UN under former President George W. Bush. In the course of a half-hour conversation in his Washington office, Bolton manages to paint a completely different picture of the UN. He portrays it as a political ineffective organization, one in which countries play off their individual interests against one another while simultaneously talking about the community of nations. The Americans are against relinquishing any power to such an organization. Their own interests are simply too dominant.

Former German Defense Minister Volker Rühe knows this all too well. For him, the defining experience happened five years ago, during the first attempt at reform, when he discussed the United Nations with a senior American diplomat in New York. Rühe, who served as defense minister in Helmut Kohl's administration, had traveled to New York as the envoy of then-Chancellor Gerhard Schröder, Kohl's successor. His mission was to convince other countries that Germany belonged on the Security Council as a permanent member.

Rühe told the American diplomat that the Security Council, with its five veto powers, did not reflect the world of the 21st century. He pointed out that India is not a permanent member, nor is Brazil or Germany, and that the global balance of power had changed since the UN was founded in 1945.

In response, the American pulled a list out of his jacket pocket and enumerated the instances in which Brazil and India had voted against the United States. Why should America have an interest in upgrading these countries, he asked? The attempt at reforming the UN, in which the German government had placed such high hopes, collapsed soon afterwards.

The situation hasn't improved since then. Rather, it has deteriorated. The United States and China have resolved to settle key issues between themselves. Together, they have enough power to dominate the world, first economically and later politically. A body in which many players have a say would only interfere with their interests.

This position only encourages the mid-sized powers to secure more influence. Indeed, the biggest proponents of Security Council reform are the so-called G-4 nations, Germany, Brazil, India and Japan.

Their problem isn't just the major players' aversion to sharing power. Individual animosities also play a role. The Chinese don't want the Indians on the Security Council, and the Americans don't want the Brazilians. The Russians and the British don't want anything to change, while the French at least pretend that they want the Germans on their side. All of this has to be taken into account.

The G-4 nations changed their tactics after the 2005 failure. Today they advocate expanding the Security Council to include so-called semi-permanent members, which could be elected for 15 years and then possibly reelected, making them practically full-fledged members. Under the proposal, the semi-permanent members would not have a veto, at least not initially.

Those are the long-term plans. For now, the Germans are trying to ensure that they will be elected to the Security Council for the next two years. At the German Foreign Ministry, there is a list indicating the current status of the campaign. The list includes a category for pledges that are considered reliable and another category for those that are relatively worthless. There is also a category for countries that have been unwilling to make a commitment to Peter Wittig, the German ambassador, which is not seen as a good sign for Germany.

Although Wittig isn't prepared to say anything about the current situation, things do not appear to be looking too bad for Germany. Still, the Canadians are seen as the favorites, because the Europeans are already strongly represented in the Security Council. The Portuguese have reportedly promised more development aid to many countries.

The vote is secret, which makes the outcome all the more uncertain. When the Austrians applied two years ago, they realized afterwards that the number of firm commitments they had received significantly outnumbered the votes that were eventually cast in their favor.

One thing is already clear: If Germany is not elected to the Security Council, the dream of a permanent seat will have become that much more distant.

3 Bilder Photo Gallery: A Place on the Council 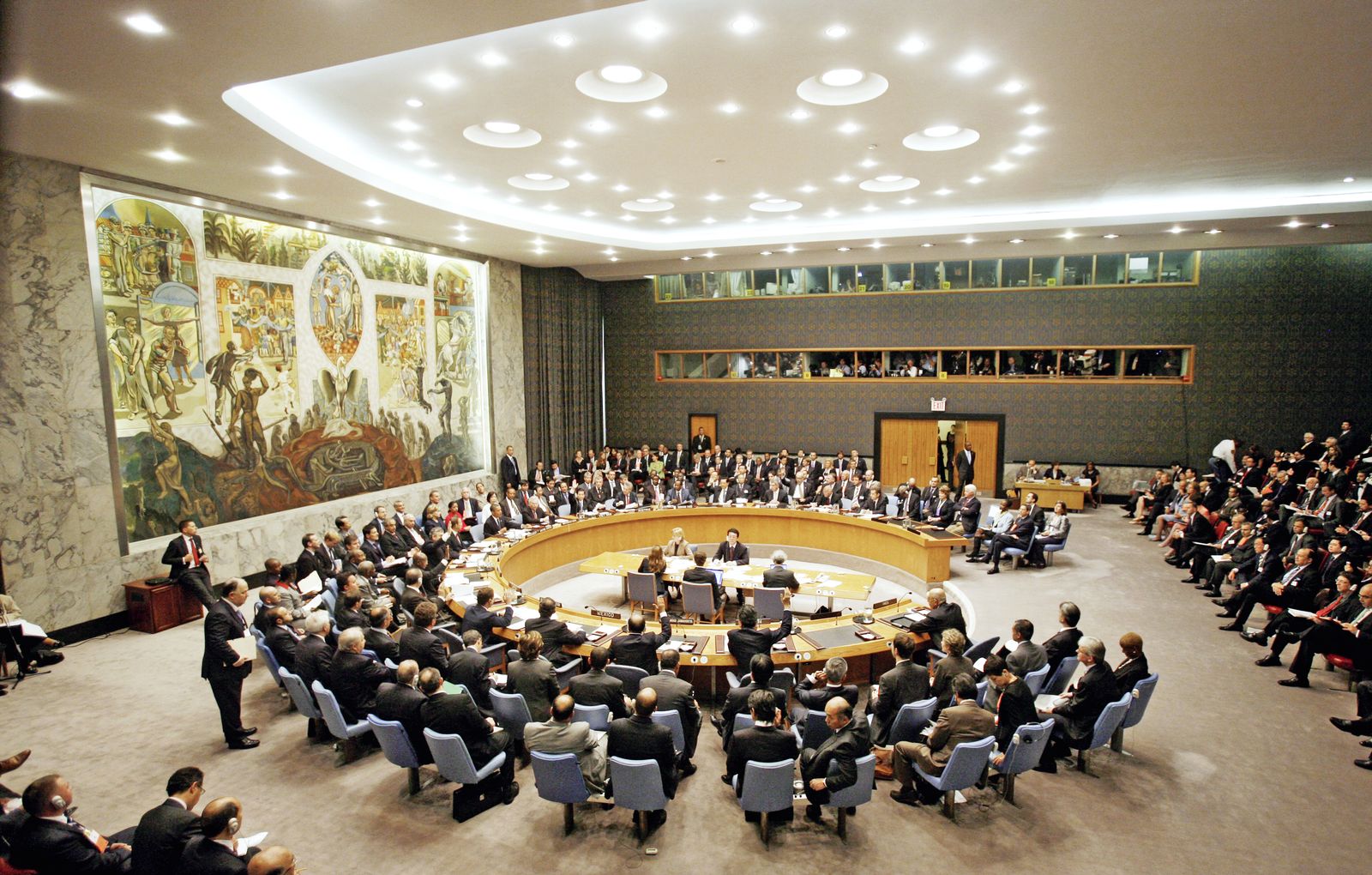 Germany is once again dreaming of a permanent seat on the UN Security Council. But powerful forces oppose any reform of the body. This Sept. 2009 photo shows a meeting of the Security Council at UN headquarters in New York.