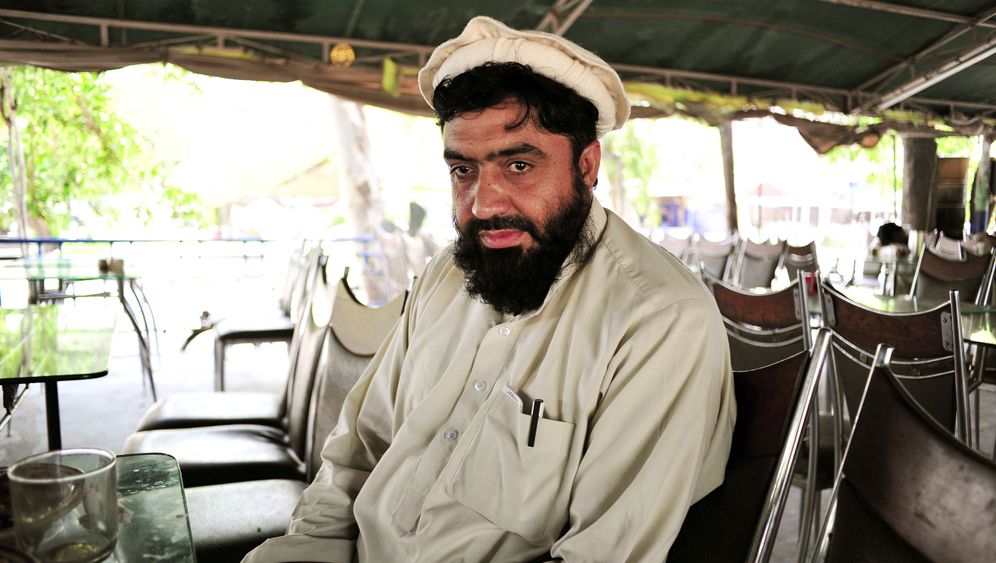 Photo Gallery: The Victims of the Drone War

Noor Behram remembers why he started on his mission to photograph the scenes of drone attacks in Pakistan. The reason was 12 dead people -- an entire family extinguished in what was officially a US attack on militants. But the 39-year-old, who works for Arabic language news network Al Jazeera, had sources in Waziristan who told him the official story was only half of the truth.

He climbed in his car and travelled from his home in Miranshah to Shawal, the location of the bombing, and he saw something that remains burned into his mind: charred body parts and shredded clothes, hanging from the trees.

"In actuality an American helicopter had attacked a hotel where insurgents were allegedly hiding out," Behram said. "A family that lived on a neighboring slope heard the noise and watched the incident down in the valley. In this moment a US fighter jet roared over and shot a rocket at their home. Eight women and girls, along with four men, died."

But on that day, June 27, 2007, the reporter found no word of this family in the newspapers -- only news of killed extremists. The shock inspired him to photograph the unacknowledged death and suffering of civilian victims of the war in western Pakistan with the hope of publishing them someday.

"Most of the people are killed by American drones," he said. "But reports on these incidents also say that a certain number of militants have been killed."

Almost all of Behram's photos come from locations in northern or southern Waziristan. They've been hit by rockets fired from drones manned from across the world -- from control rooms in the US. "I can't say how many extremists have been killed in reality," he says. "All I can say is that most of the victims are not militants, but those who aren't involved. Mostly women and children."

Washington officials say there are almost no civilian victims any longer because the drone attacks are so precise. But Behram disagrees. "I estimate that for every dead extremist there are some 15 civilian victims," he said.

After visiting the sites of some 70 drone attacks in the last four years, Behram has seen more than 600 corpses. This work is a personal project, not in association with Al Jazeera, he said, explaining he wanted to see the truth for himself. But as a journalist in Pakistan, Behram earns little and had to borrow a camera from friends and relatives. Painfully detailed images are the result.

The work is also dangerous. Often, arriving shortly after an attack, Behram feared more shots might be fired.

Insomnia, and Other Disorders

He would help dig the dead and wounded out of the rubble, he said; he would tend to the injured. Only afterwards did he pull the camera from his pocket. He had to ask permission to use it from clan elders and Taliban commanders. He had to convince them he was not a spy, not one of the people who pass on coordinates for possible drone strikes to the CIA.

It's impossible to double-check the veracity of his photographs. Almost no journalist can roam independently in Waziristan. But Behram's claims about them do match up with the dates and locations of real drone strikes.

Now he's sitting in a restaurant in the Pakistani capital of Islamabad. He wears a beige-colored outfit consisting of a knee-length cotton shirt, baggy pants and a matching Pashtun cap. He seems nervous and blinks a lot; his right eye squints a little. He's not feeling so well, he says. No one feels well in Waziristan. Many people have psychological problems. "The worst part is the insomnia," he says. "The drones shoot mainly at our houses, and we always have to worry about being targets. How can you sleep well under those conditions?"

Twice a week the Pakistani army locks down both parts of Waziristan, so no one can leave their homes. These are resupply days for the army, when ammunition and food arrive for Pakistan's anti-terrorist forces. The lockdown is a response to attacks on the army. "On these two days all the stores are closed," says Behram. "But even on the other days the businessmen rarely do much business. Who has work nowadays? Even the schools have shut down."

Dealing with the Taliban isn't always easy, he says. There's violence every day, and the Taliban fight with Pakistani soldiers and policemen. But civilians are also killed regularly -- people considered spies by the extremists. Representatives of the government are not much better, says Behram, because they have to pay several thousand euros in bribes to gain power. "Once they're in government, they take all the money that flows around the region and put it in their pockets," he says.

Many people from Waziristan say -- independently of one another -- that America's drone attacks radicalize the locals. The attacks are formally condemned by the Pakistani government, but sanctioned in secret, as diplomatic cables released by WikiLeaks make clear. "When a house is destroyed and civilians die, you can assume that the people who lived there, their neighbors and their friends all hate America," says Behram. Violence and economic need have led inevitably to radicalization, he says. The people have no choice: "They're too poor to look elsewhere for better prospects."

He understands why the US would fight the Taliban. "The US and the Taliban are in a war, we acknowledge that," he says. "But what do the thousands of people living in western Pakistan have to do with it? Why are they being killed?" He wants to show that injustice is being committed. The drone war started in 2004, but President Bush escalated it in July 2008, and his successor, Barack Obama, has intensified it further. He wants to show that it makes no sense.

He tries to remain neutral. He smirks and says his wife, who runs a school for girls, named their first son "Osama." The boy was born five years ago. "There are many Osamas about the same age in Waziristan," he says, brushing a hand through his thick black beard. "It's a protest by the people against these drone attacks."

He laughs, as if he knows quite well that it's a useless protest. Then he suddenly quits laughing.

"Osama has leukemia," he says.

His campaign against the drone attacks is also an attempt to distract attention from himself. In March he believed he'd collected enough pictures. He had them enlarged to poster size, invited a group of journalists at his own expense to ride in a bus, and brought them to Islamabad, where he'd displayed the pictures on a homemade stand.

"I took the journalists into my own protection," he said. The Pakistani government has no interest in letting the suffering of its own people -- which it privately allows -- come to light. And it's not squeamish in the way it treats dissidents.

In Islamabad he happened to meet a lawyer, Shahzad Akbar, who represented a number of drone victims and was preparing a big lawsuit. He introduced Behram to the British human-rights organization Reprieve, and now a collection of the photos will go on display in London. Eighty-five of them -- all the pictures that seem unsuitable for the media. "In an exhibit they have a different impact," he says. But he's not so sure about a photo with a blood-smeared Koran. He doesn't want to cause any bloodshed. Violence in reaction to violence brings nothing.

Maybe, he says, he'll publish a book next. Over the last four years he's kept an acerbic journal about his experiences and observations. The story is meant to serve as an alternative to the official reports from a dangerous, war-torn region.

Now, he says -- since he's known by the locals, since he's become a public figure -- nothing can happen to him.

6 Bilder Photo Gallery: The Victims of the Drone War