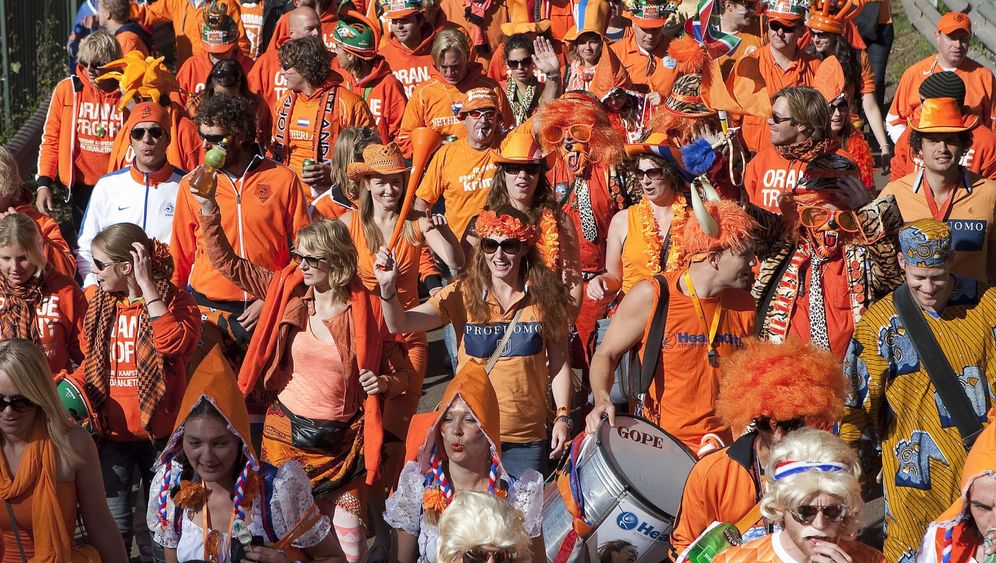 The Berg River Resort in Paarl is an hour's drive north of Cape Town. The campsite offers a swimming pool, two billiard tables and a miniature golf course. You can fish for trout, go for donkey rides or cycle up into the vineyards on mountain bikes. "But you can also forget about all that and just watch football," said "Antje" from Holland, before ordering another beer.

Antje is in fact an elderly gentleman from the Dutch city of Enschede. He's wearing a blond wig with pigtails and a traditional white lace bonnet, along with a Dutch national football team shirt. Antje's team has just won another World Cup match, and that's got to be celebrated.

Some 150 fans from the Netherlands are gathered around the beer tap. Peroxide blonde female students in tight orange skirts, pensioners in orange flipflops, mothers and fathers in orange hoodies. They're drinking Heineken and singing "Viva Hollandia."

They've got something to celebrate after knocking out Brazil in last Friday's quarter-final and advancing to the semi-final clash with Uruguay on Wednesday night.

In normal years, the campsite in Paarl is deserted during the winter. But now it's a village of small brown tents. Sausages are sizzling on the barbecue, the tables are laid out in orange and there are orange barrels and gas cylinders stacked up next to the toilet building.

The Dutch fans have been camping out in South Africa for the last three weeks, travelling to each stadium where their team has played. South from Pretoria and along the Garden Route to the Cape, in an orange double-decker bus, in Land Rovers, in orange VW Beetles, in trucks and in an old orange Burton, an open-top sports car based on the chassis of a Citroen 2CV.

South Africa has a 150 camper vans to rent and the Holland fans booked 120 of them. Apparently the remaining 30 were broken down. The convoy consists of 175 vehicles, at a length of six kilometers (around four miles) from the first to the final vehicle. It is arguably the longest vehicular column in South Africa since the beginning of the Great Trek in 1835, when the Boers, migrants from Western Europe, including Holland, fled from the British into the desert.

The convoy includes Dutch fans fans who drove all the way from the Netherlands. It took them nine weeks to travel the 20,000 kilometers, through the Nubian Desert in the Sudan and the Serengeti desert in Tanzania, in the murderous heat. Four vehicles broke down with engine damage on the way and in Malawi one of their number drowned while swimming. At that stage they almost halted their journey.

The Dutch are camper van crazy. The country has 285 RVs per 10,000 people. Wim Kok, the former Dutch prime minister, enjoyed holidaying on campsites while he was in office. For the Dutch, camping is more than travelling -- it's a home away from home. The fans have clearly adopted that attitude in South Africa.

Some fans will do the craziest things to see a football game at the other end of the world. A Norwegian cycled from the top of the North Cape to the southern tip of Africa and four Swiss drove from Zurich in a VW bus -- but nobody is doing it more colorfully or louder than the Dutch. In football's travelling circus, they are the clowns.

'Didn't Know that the Japanese Could Drink That Much'

When their team plays, they march behind the double decker bus to the next train stop, or even right up to the stadium. Dressed as orange fairies, as an orange Elvis or orange Indians, it is a demonstration of their high spirits. "We have a lot of fun here, with the locals and with the fans from other teams," says Mari van der Doelken who lives near Eindhoven. "I didn't know that the Japanese could drink that much."

One morning while in the Kruger National park, the fans found a baby elephant in the middle of their camp. In Pretoria they lay in their sleeping bags at temperatures of minus 8 degrees Celsius (17.6 dgrees Fahrenheit). And in Johannesburg they caused a traffic jam on the motorway. When the camper vans left Johannesburg after the first World Cup game their team played, the police closed Highway N3 for 20 kilometers (around 12 miles) for them. South African television carried a live broadcast of their departure.

Only a small portion of the orange convoy drove to the Friday's quarter-final in Durban . Most of the tickets for the game against the Brazilians had already been purchased by Dutch fans who had come especially from Amsterdam for the contest -- by plane.