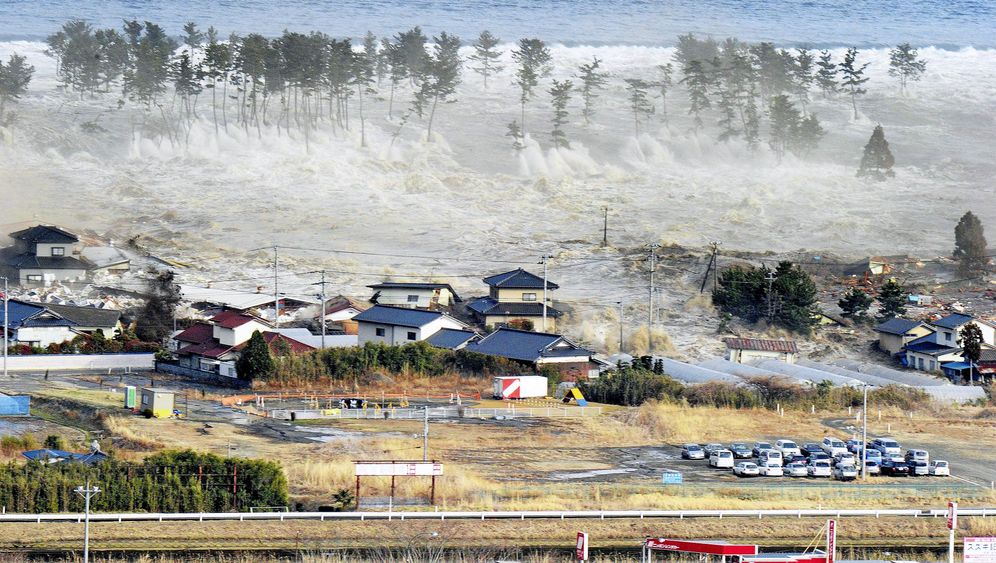 Rescue efforts continued in shell-shocked Japan on Friday night following the country's devastating earthquake and tsunami. Police are reporting the discovery of hundreds of bodies in the wake of the natural disaster that struck the northeastern part of the country.

The horrendous damage caused by the 8.9 magnitude tremor is visible in large areas: In the coastal region around the city of Sendai alone, 200 to 300 bodies have been found with another 110 confirmed killed and 350 missing. Police say 544 people have been injured. On Friday evening, the Japanese news agency Kyodo reported officials fear the death toll could rise to more than 1,000.

Meanwhile, thousands of residents are being evacuated from the area around a nuclear power plant which was damaged in the huge earthquake. The Japanese government declared a state of emergency in the area around the site.

The emergency cooling system at the Fukushima nuclear power plant is having to run on batteries, which are only able to supply power for a few hours, the Association for Plant and Reactor Safety (GRS) in Cologne reported. "In the worst case, this could threaten a meltdown," said GRS spokesman Sven Dokter. The exact situation at the plant, however, is still unclear, although officials said there was currently no sign of a radioactive leak.

Work has begun on restoring the reactor's cooling system, Jiji news agency quoted the Trade Ministry as saying. Residents living within a 3 kilometer radius of the plant have been told to evacuate, Japan's Chief Cabinet Secretary Yukio Edano told a news conference.

There were earlier reports of a fire in a turbine room at the Onagawa nuclear power plant, and in total, four nuclear power stations in the region where the earthquake struck have been shut down as a precaution, according to the International Atomic Energy Agency in Vienna. 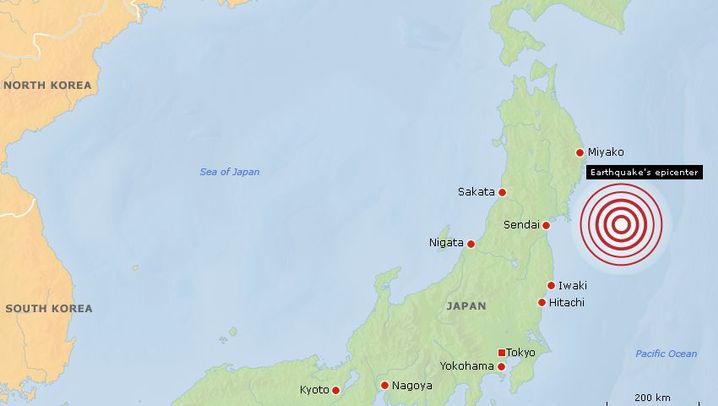 Photo Gallery: The Earthquake and Tsunami in Maps

Several oil refineries are ablaze, including the Cosmo Oil facility in Shiogama, a suburb of Sendai, where a large explosion was reported. A fire is reported to have broken out at the refinery at Lichihara near Tokyo, where the complex was said to be completely in flames.

And a Japanese coast guard official says a search is under way for a ship carrying 80 dock workers that was swept away when the tsunami struck. The vessel was washed away from a shipbuilding site in Miyagi prefecture, the area most affected by the earthquake.

Around 1,300 people are still waiting for help at Sendai airport, according to the Mainichi newspaper. They include terrified passengers, employees and residents who fled to the third floor after the alarm was sounded. There is no power and people are relying on their mobile phones to keep track of events. One airport employee said: "The waves came rolling in with an incredible force, it was like in the movies."

Wave measuring systems in the cities of Miyako, Ofune and Kamaishi failed. According to the Yomiuri newspaper, they were only designed to measure up to 10 meters -- so it is it likely the tsunami was even higher.

In California, many beaches were closed in anticipation of the tsunami waves of six feet expected to reach the West Coast of the US. Residents along the coast in the state of Oregon were advised to leave their homes and travel to safer areas, according to the BBC. A comprehensive tsunami warning still remains in force throughout the Pacific region. The US State Department, meanwhile, has advised against all unnecessary trips to Japan.

The tsunami hit Hawaii on the southern beaches of the island of Oahu, but there were no initial reports of damage. Authorities had walked the beaches to wake homeless people up while lines for gasoline stretched for blocks, and people rushed to stores to stock up on emergency supplies and water. Downtown Honolulu and Waikiki were packed with motorists trying to leave for higher ground and for shelters set up by the state.

President Barack Obama, a native of Hawaii, was notified of the massive Japanese quake at 4 a.m. GMT and instructed the Federal Emergency Management Agency to be prepared to assist affected US states and territories, the White House said.

The earthquake struck at 2:46 p.m. local time, 6:46 a.m. CET, around 250 miles (400 kilometers) from Tokyo, off the coast near the city of Sendai. According to the US Geological Survey, Japan has been shaken by four aftershocks, ranging from 5.1 to 5.8. Police reports suggest the final death toll could be staggering.

UN General Secretary Ban Ki-moon has expressed his condolences to the Japanese people. He said the world was "shocked and saddened" by the images of the disaster, and offered whatever help the UN could provide.

'In These Tragic Hours, Germany Stands at Japan's Side'

German Chancellor Angela Merkel has also offered help to Japan following the earthquake, Reuters reported. According to government spokesman Christoph Steegmans, Merkel wrote to Prime Minister Naoto Kan to express her dismay at the disaster, offering her sympathy to the families of the victims and wishing a speedy recovery for the injured. "Be assured that in these tragic hours, Germany stands at Japan's side, and is ready to help," the chancellor wrote.

The German government is already sending its first personnel to Japan, including four experts from the Agency for Technical Relief (THW) who are en route to Tokyo, the Foreign Ministry in Berlin stated. They will help support the work of the German Embassy, and will be ready to assist the Japanese if necessary. Other THW teams, meanwhile, are being mobilized and would be ready to go to Japan if help is requested. Private organizations like Aktion Deutschland Hilft, a consortium of German charitable and emergency relief organizations, are also preparing to travel to the earthquake zone. 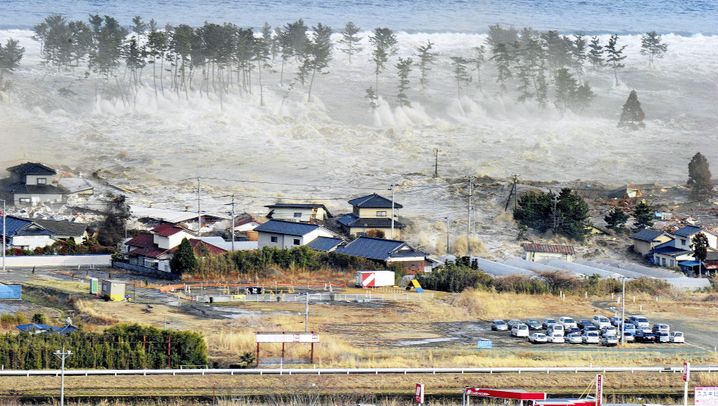 Queen Elizabeth II of Great Britain has also sent her condolences. According to the Mirror, the Queen said in a message: "I was saddened to hear of the tragic loss of life caused by the earthquake which has struck northeast Japan today. Prince Philip joins me in extending our heartfelt sympathy to your Majesty and the people of Japan. Our prayers and thoughts are with everyone who has been affected by the dreadful disaster."

According to the Telegraph, British Prime Minister David Cameron said the disaster was a "terrible reminder of the destructive power of nature." Speaking in Brussels where he is attending a summit of European Union leaders to discuss the siutation in Libya, he said: "Everyone should be thinking of the country and its people and I have asked immediately that our government look at what we can do to help."

France has also offered its help to Japan. In a letter to Japanese leader Naoto Kan, French President Nicolas Sarkozy said: "France is ready to respond to any possible request that Japan may wish to make in order to handle this tragedy."

The quake, one of the strongest ever recorded, left many people injured, police said, and unleashed a 10-meter high tsunami and widespread flooding.

Sarkozy expressed his "deepest emotion" at the disaster and "the support and solidarity of France for the Japanese people at this particularly difficult time."

Foreign Minister Alain Juppe echoed this in a statement. "France is ready to provide assistance to Japan if the country's authorities want it," he said.

People were running on the streets in panic as the tsunami inundated the coast. According to the Japanese news agency Kyodo, the government reported that dozens of fires had broken out in the northeastern part of the country, with flames and black smoke rising from one oil refinery.

Japanese TV pictures showed the tsunami water carrying debris, including cars and trucks, as well as flames rising into the sky near the capital. Vehicles were seen being washed across the runway as Sendai airport was completely flooded. Some people were spotted taking refuge on the airport roof. There have also been reports of numerous fires in the city, which has a population of just over 1 million.

Bullet train services in northern Japan were suspended, while transport services in Tokyo were halted. Buildings shook severely in the capital. Witness Hidekatsu Hata, 36, manager of a Tokyo restaurant, told Reuters: "I was terrified and I'm still frightened. I've never experienced such a big quake before."

Asagi Machida, 27, a web designer in Tokyo, ran out of a coffee shop when the tremor hit. "The images from the New Zealand earthquake are still fresh in my mind so I was really scared. I couldn't believe such a big earthquake was happening in Tokyo."

The Bank of Japan, meanwhile, has said it will do all it can to ensure stability in the financial markets after both the yen and the stock market fell in the wake of the earthquake.

Earthquakes are extremely common in Japan, one of the most seismically active areas in the world, but this latest tremor was unusual because of its intensity. It was the biggest earthquake to hit Japan in decades, and there have been numerous strong aftershocks which scientists say could last for weeks. "Stresses build up for hundreds of years, then suddenly break down. That's what has happened now," said Michael Weber, a seismologist with the German Research Center for Geosciences (GFZ).

Such strong tremors are relatively common in the Pacific Ring of Fire, a volcanic belt which surrounds the Pacific Ocean, giving rise to earthquakes and tsunamis.