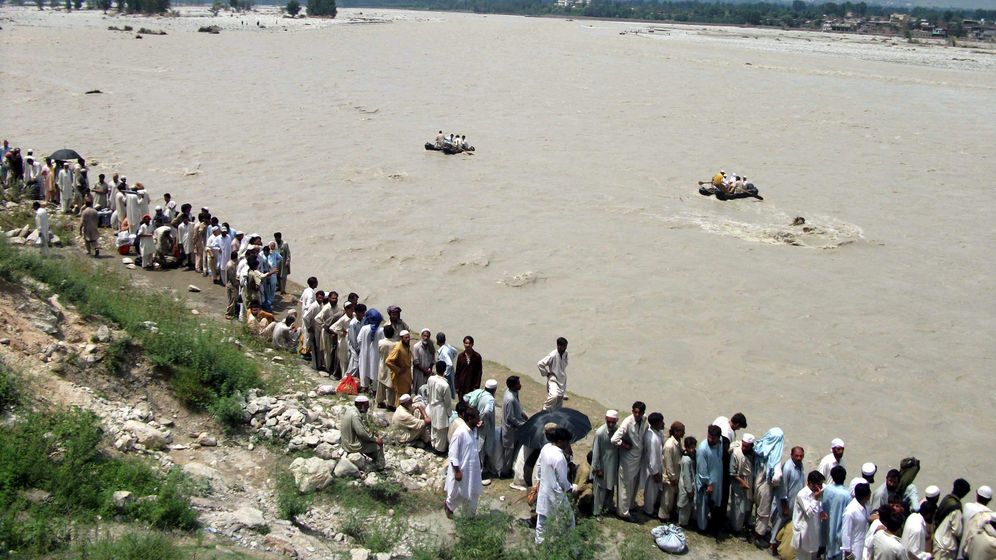 Photo Gallery: The Suffering of the Swat Valley

"My God," says Jawad when he finishes telling his story. "If I didn't know that all this is true, I would think, 'what an exaggerated story.'"

Jawad sells handicrafts and silk scarves in his uncle's store in the city center of Mingora -- on a street which has been known as the "bloody mile" since the beginning of 2009.

Mingora is the biggest city in the Swat district, a corner of northwestern Pakistan in the province of Khyber-Pakhtunkhwa. Queen Elizabeth II once called the valley the Switzerland of the British Empire. It was a time when the Swat Valley was high on the list of international tour groups and hundreds of thousands of Pakistanis came here in the summer to escape the heat in the south.

Now, nobody goes to Swat if they can avoid it. Jawad is only in his mid-20s, but he has experienced all of the Swat Valley's recent tragedies himself: the devastating earthquake in 2005, the penetration of the Taliban into the valley, their brutal rule, the fight against terror in the last two years. And now, the astonishingly vast floods.

Some 80,000 people lost their lives in the earthquake, most of them in Kashmir. "But we felt the effects here in Swat as well," says Jawad. "Several buildings were destroyed." It was around that time that men with long hair and long beards began to show up in the region -- men with an extremely conservative outlook on the world.

Afraid to Oppose the Taliban

"Unfortunately, we didn't take the Taliban seriously back then," says Inayat Ullah, Jawad's uncle. When they began to show their true faces, they were already so strong that people were afraid to oppose them. The US, together with countries in Europe, warned General Pervez Musharraf, the then-head of Pakistan's military dictatorship, to do something about the developing state within a state just four hours by car north of the capital Islamabad. But he declined and allowed the Taliban to grow in strength.

They forbade cinemas and music, CD shops were destroyed, barbers received death threats should they persist in shaving beards -- anything other than long facial hair was seen as "un-Islamic." They burned down girls' schools and assaulted women who did not completely veil themselves.

"They ruled with pure violence," says Jawad. "Their aim was to spread fear and terror. And they were quite successful." Pointing to a nearby intersection, he says "over there, the Taliban decapitated petty criminals." Today, a policeman stands in the center of the intersection trying to direct the chaotic traffic from a concrete pedestal where the executions took place. "Every now and then, we would find a corpse in front of our store as well," Jawad says.

Increasingly, the Taliban began killing soldiers from the Pakistani army. Finally, at the beginning of 2009, the Taliban officially claimed power in the Swat Valley and declared Sharia as the only valid law in the region. After a failed attempt to negotiate a peace agreement with the Taliban, the Pakistani government -- now under a democratically elected leadership -- declared war on the militants, primarily in response to pressure from the US.

"Nobody warned us," says Jawad. "As the situation became increasingly violent, we packed our stuff and moved to safety." He himself was able to find lodging with relatives in Islamabad, but many people had nobody to turn to and collected in refugee camps. Ultimately, some 2 million people fled to other parts of the country from the Swat Valley. "It was like a ghost town, buildings were empty and everywhere there was gunfire," says Jawad.

There are still holes in the façades of buildings in Mingora from this period. Thousands of people lost their lives in the fighting before the military declared that "some 2,000 insurgents" had been killed and the valley was "liberated." But even now, a year and a half later, the valley has not found peace. In the mountains to the north, near the Kalam Valley, military operations against the Taliban continue. "On Monday, we tried to overrun insurgent positions," relates a soldier over the telephone from the frontlines. "They shot my best friend, who I went to officers' school with."

The military, at first celebrated as liberators, soon earned a reputation for brutal mistreatment of Swat locals. They have been accused of performing extrajudicial executions. "That house over there," says Jawad, pointing to a pile of bricks, "belonged to a man the army accused of supporting the Taliban. The soldiers simply blew it up."

Still, people began returning to the valley to fix up their houses or build new ones.

But then, on July 29, the Swat River burst its banks. The water levels became so high that even those houses that weren't washed away have been flooded to the second floor.

Now, large swaths of the Mingora city center have been destroyed. People are trying to find normality among the rubble. Two boys have set up a table in front of their father's destroyed shop and are selling bottles of perfume which they managed to save from the floods. Another family is trying to waterproof the remains of their house with a tarp received from the United Nations refugee agency UNHCR. An elderly man and his handicapped son, having lost their home to the floodwaters, beg for a few rupees.

The northern part of the Swat Valley was particularly hard hit, with some villages almost completely destroyed. Help only began arriving to the region a few days ago when US military helicopters started to deliver food, water, medical supplies and tents. The helicopters swoop low over Mingora on their way north. In a severely damaged part of the city, two people look skyward. "I wonder if they will ever land here," a man wonders aloud as he shovels mud and debris out of his collapsed shop.

Authorities are having trouble providing aid to all those who need it. The catastrophe is simply too big -- any government in the world would have difficulties in the face of such a disaster, say Pakistani politicians. The fact remains, however, that even five years after the earthquake, there is still no effective disaster response system in place. Back then, millions of dollars in aid money donated from abroad never made its way to those who needed it most.

Once again, officials have seemed helpless. For lack of any kind of aid plan, the provincial government in Khyber-Pakhtunkhwa has decreed that members of the provincial parliament are to distribute aid money and supplies in their own constituencies. "We'll be waiting for help for a long time," says a shopkeeper in Mingora. "The politicians will only help people who they like. Everyone else will go without."

'What Have We Done Wrong?'

People in Mingora in general don't have much use for their politicians. "They only think of themselves," complains an old man reading a newspaper in front of the remains of his home. "Yesterday, a parliamentarian showed up. He came in a convoy of three cars plus a police escort, just to show his face for a few minutes."

It is a problem that has suddenly proven a major hurdle in the effort to collect international donations for Pakistani flood victims. Many fear that rampant corruption will prevent aid from reaching those who need it. Assumptions as to the country's involvement in extremist Islam and presumed support of the Taliban have also resulted in only a trickle of help flowing in from Western donors.

Three weeks after the beginning of the flood disaster, Islamabad has now begun taking action to address the problem. A non-partisan commission is to be established which will regulate the provision of aid to flood victims. Credible celebrities are to ensure that the help reaches those in need.

But time is growing short. There have been reports of children starving to death and the Swat Valley has begun to see cases of cholera. The situation in many parts of the country is getting worse by the day.

"I have read that some people are saying that the flood is God's punishment for our failures," says Jawad. "But what, for heaven's sake, have we done wrong to warrant being punished so often?"

19 Bilder Photo Gallery: The Suffering of the Swat Valley
Merkliste