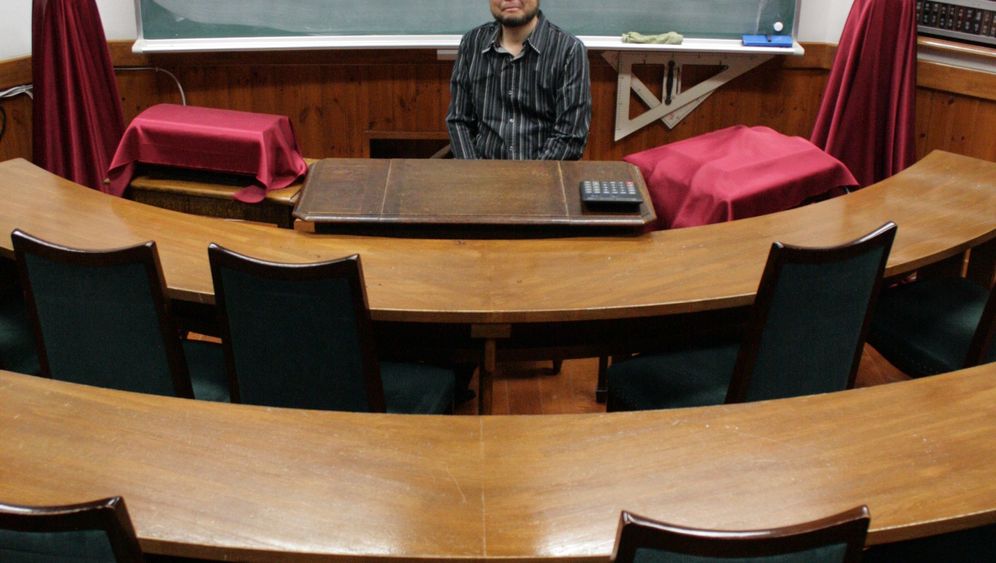 "Saury pike bones are dangerous," says 50-year-old Terumi Hangai, as he rummages for a colored pencil drawing showing an illustration of a blue and white fish smiling sweetly. "Radioactive Strontium has accumulated in its bones." That's unfortunate for Hangai and his fellow compatriots, for whom the fish is a popular dish. Spinach, on the other hand, no longer poses a problem. Hangai says it's also okay to drink milk in the Fukushima prefecture without second thoughts. His claims are supported by both government data and independent experts.

Terumi Hangai, who studied chemistry, is a teacher. Before the earthquake he coached Japanese schoolchildren at his private tutoring school to help them achieve top grades. But since the March 11, 2011 catastrophe, the young people in the city of Tamura don't seem to be in the mood for studying anymore. When asked if he thinks this is related to the nuclear accident, he responds, with a sigh, "I don't know."

The city of Tamura is located about 50 kilometers (31 miles) west of the Fukushima Daiichi nuclear power plant. The radiation levels there are about the same as in some places in the state of Bavaria, in southeastern Germany -- in other words, not high enough to pose an immediate health risk. Still, Hangai's students have recently stayed away from his tutoring school, leaving him with a lot of extra time on his hands. Far from bored, though, Hangai is hard at work -- he's a man with a mission.

Hangai has set out to free the people in his hometown of their fear of radiation. All that is required for his task is some data, his self-accumulated expertise and an infectious laugh.

On this particular day, he is targeting the people from the village of Katsurao, which is located directly at the edge of the 20-kilometer exclusion zone around the destroyed nuclear power plant. A few of the homes in the village are also located just on the other side of the roadblocks leading into the exclusion zone. Almost all of the villagers fled after the disaster in order to protect themselves against increased radiation. But Hangai says that while the radiation levels may be higher than they were in the past, they still aren't dangerous.

"No politician or scientist wants to take responsibility, so I have decided to!" he says. When asked why, he drones, "Because I love Katsurao and I want the people there to get their lives back together and to be happy again."

Hangai whizzes along the snow-covered road to Katsurao in his heavily heated car. "I believe the government figures," he says. After all, the data has been collected by scientists using high-quality instruments. "One of them costs 15 million yen (€139,000)." Hangai turns his head enthusiastically to the passenger seat and the car briefly veers off course. He recalls how, last summer, his wife bought kilos of peaches from the area around Fukushima at incredibly low prices. Nobody wanted them, although they weren't contaminated at all.

In the village of Katsurao all is quiet, except for the sound of a few crows cawing. Icicles hang from the roof of a large barn that used to be home to a few hundred cattle. Sparrows flutter out the window of a pickup truck. Hangai trudges through the snow in his expensive leather shoes. Although he prefers to spend his time frequenting fine restaurants, he doesn't complain. He believes what he's doing here is important. He wants his German visitor to understand what the fear of radiation has done to this village.

Three women are sitting in a construction site container in the middle of the village. "Radiation is our biggest concern," says Yukimi Yoshida. The 57-year-old used to sell rice cakes in a nearby store. Now she's wearing a blue waistcoat and a cap emblazoned with the words, "We'll never give up." She belongs to a local citizens' crime watch group that is working to protect Katsurao from looters.

It's warm inside the construction container. Yoshida sewed the cloth owls on the shelf herself and there's a teapot sitting on the heater. Outside a car drives by and the women turn their heads. They take note in a book of the color, model, license plate number and passengers. What one doesn't notice, the others do. And if there are thefts of televisions or other kinds of equipment from one of the yards, they might be able to help solve the case.

Up to 10 Microsieverts Is No Problem, Says Hangai

The women are happy that they have this job. They get on well together, better than before the earthquake. They also have good relations with the police from Tokyo who do patrols here, sometimes warning drivers about large wild boars. Their work is the only ray of hope they have in this bleak time.

Hangai tells them that in certain areas of the world -- in Iran, for example -- the natural level of radiation is permanently 10 microsieverts an hour. At one brook nearby his radiation counter peaked at only five microsieverts. Personally, he doesn't think that a measurement of under 10 is anything to worry about. The women's eyes light up.

Hangai also tells them about his mother, who had to flee the exclusion zone. "Towards the end, all she was doing was eating and sleeping," he says, "and in November she died." Yoshida nods, visibly moved. Her 84-year-old mother also died after the stress of having to flee from her home. "The spiritual and economic effects of the catastrophe are the biggest problem," says Hangai, as he glides across the smooth roads.

About 1,000 Katsurao villagers now live at 10 different provisional settlements, all of which are about a one-hour drive from their former homes. Hisayoshi Matsumoto is being housed in one such settlement. In the middle of the shelter, he has opened a store for the many elderly people who can't walk far. He sells tobacco, alcohol, rice cakes and propane cylinders.

"My shop in Katsurao was ten times as large and it's terribly cramped here," he complains. Yet he doesn't want to return, because of the radiation. It might not be that high, but it's still at least 20 times higher than before. "That can't be good!" he says.

Many in the settlement agree. Hangai flutters between them like a bird, bringing messages full of hope. Tomoko Matsumoto, a 36-year-old nurse, hangs on his every word. Until now, she had been unable to shake her unease about radiation. She no longer buys any vegetables from Fukushima because of her four children, the youngest of whom is a one-year-old. She listens carefully to Hangai's practical advice: beware of saury fish, trout, mushrooms and wild boar.

Many people here feel they have been abandoned by the government. Hangai complains that the politicians in Tokyo are aiming to keep food entirely free of radiation and keep issuing stricter regulations. But that, according to Hangai, is nonsense. The human body is loaded with radioactive substances, with or without a nuclear accident. According to scientists, one is constantly eating natural radionuclides such as potassium-40. The average radiation level in an adult human body is about 8,000 becquerel.

"They've only left Katsurao because they don't have any knowledge of radioactivity," says Hangai. His aim is to bring government ministers, experts and regional administrators together to solve Fukushima's problems. The teacher likes to see himself in the role of community savior. "I'm famous here," he murmurs contentedly.

Hangai's own fear of radiation must have once been considerable. About 12 years ago, he built a radiation-proof room in the basement of his house. "I was scared of missile attacks from North Korea," he says. "At that time I hadn't even considered a tsunami." Luckily, he says, Fukushima escaped this time with little more than a black eye. Now it's time for the rest of the world to acknowledge that and to stop demonizing everything that comes from the region.