Professor Blaise Genton is still astonished by how much has suddenly become possible. No longer must he wait weeks for important officials to return his calls, instead they phone back within just a few hours. Bothersome approval procedures are completed in record time. And the €1.5 million he needs? Even if the hospital will have to pay some costs up front, Genton, head of the Infectious Diseases Department at Lausanne University Hospital, is certain the Swiss government will soon make the funds available.

"We are faced with an extraordinary situation and have therefore been provided with extraordinarily good working conditions", says Genton, one of the most important players in the worldwide fight against Ebola. "But I need to point out that people hope we'll be able to deliver results within months that usually take one to two years to achieve." Wearing jeans and a colorful shirt, Genton hurries down a hospital corridor to a team meeting. His frantic pace is not out of the ordinary: Ever since the World Health Organisation (WHO) contacted him and his research team in early September, time has been extremely short.

Genton, a father of six, didn't hesitate when the WHO asked him if he was interested in leading one of the world's largest Ebola vaccine studies. Despite knowing that his private life would suffer greatly during the test phase, he immediately agreed. On some days, he says, he and his team only get four or five hours of sleep.

According to official numbers, more than 5,400 people have died of Ebola in West Africa, with more than 15,000 having become infected in Liberia, Sierra Leone and Guinea. While a large-scale international aid effort has finally been launched, the epidemic is far from being under control. The situation in Sierra Leone and Guinea remains critical and cases have now been recorded in Mali, Guinea's politically instable neighbor to the east. Only in Liberia has the spread of the disease begun to slow, the WHO says.

Despite the growing effort, is quite possible that helpers on site will not be enough to halt the epidemic. Consequently, significant hope is resting on the shoulders of medical researchers such as Blaise Genton in Lausanne. Or Marylyn Addo from the German Center for Infection Research in Hamburg, whose team is currently testing another possible vaccine.

Many experts believe that it will only be possible to stop the epidemic by deploying both new vaccines and improved medication. Any outbreak affecting thousands of infected patients in several countries simultaneously is "extremely difficult to control" using a traditional quarantine approach, says Jeremy Farrar, director of the Wellcome Trust, a non-profit foundation with assets of about €21 billion that funds part of the vaccination studies. As such, the timeframe established by the WHO for the region-wide deployment of vaccines and medication is extremely ambitious.

The current studies involve relatively few participants and are only intended to confirm whether the candidate vaccines are tolerated well and what dosage needs to be administered (phase 1). They must be followed by large-scale tests in affected areas to examine whether vaccines in fact provide protection against the virus and what, if any, side effects they have (phases 2 and 3).

In January at the latest, though sooner if possible, the efficacy of the two most promising vaccines is to be tested on thousands of volunteers in Liberia and Sierra Leone. If the vaccines work, the plan calls for pharmaceutical companies to produce hundreds of thousands of doses by early June, which would then be available for administration.

Experiments to test medications are to proceed with similar speed. In December, Doctors Without Borders is planning to launch studies with three different drugs in its treatment centers.

Almost half of the 120 volunteers in the Lausanne study have already been injected with the vaccine cAd3-ZEBOV. The serum is based on a common cold virus that affects chimpanzees, but not humans, to which an Ebola protein has been added. It is hoped that the resulting adenovirus will sensitize the human immune system to the Ebola virus.

The product is being developed by the British pharmaceutical giant GlaxoSmithKline (GSK) and is regarded as one of the two most promising vaccines. In addition to Lausanne, it is also being tested in Oxford, in Mali, and at the National Institutes of Health (NIH) in Bethesda, Maryland, where the first successful results were announced this week. During this initial clinical test phase, the teams have been frequently sharing data to determine, for example, correct dosages.

Brian Shepard, a volunteer in Bethesda, says the worst part was ripping the Band-Aid off his arm, though he had a low fever on the day after the vaccination, but it quickly subsided. Shepard is also a scientist at the NIH and volunteered for the trial out of curiosity, similar to most of the others. Volunteers are also paid a small fee.

Marylyn Addo likewise had no trouble finding volunteers for her tests. As soon as it was announced that Hamburg-Eppendorf University Hospital would be conducting a study, emails from prospective participants began flowing in. Concurrently with colleagues in Geneva, Gabon and Kenya, the Hamburg research team has begun testing the second Ebola vaccine candidate, rVSV-ZEBOV, developed by the Canadian Public Health Agency in Winnipeg. It is a live vaccine that contains a genetically engineered virus found in farm animals.

"There is no risk whatsoever that anybody might become infected with Ebola through the vaccination", assures Addo, her black curls pinned up and a white notebook on the table in front of her. The notebook cover reads "All will be well in the end". How much longer will it be before the Ebola epidemic has been contained? Addo is at pains to lower expectations. "We can't necessarily assume that the vaccine will have a dramatic effect on the future development of the current epidemic."

Genton concurs. "It's more likely that the epidemic will subside before the vaccine will be ready for use," he says. "However, if the virus spreads to other neighboring countries, vaccinations may still come to play a decisive role."

Initial results from the ongoing tests have been promising. The National Institutes of Health in Maryland announced this week that it has managed to produce an immune response in a trial involving 20 adults with no serious side effects being observed. Larger trials are now in the works.

GlaxoSmithKline is anxious to begin large-scale testing in Liberia and Sierra Leone by mid-January. Ripley Ballou, head of the company's Ebola program, says that, because of instabilities in the two countries, two studies will be conducted. "Given the logistic challenges and the uncertainties around this epidemic, we decided we needed a backup strategy," he says. "We felt that it would be very disappointing to come through this epidemic and not know if any of these vaccines work."

The Search for Money

Among the least of his concerns is the fact that the vaccine currently needs to remain refrigerated at minus 80 degrees Celsius at all times, which could prove a problem in the field. But, Ballou says, "we have some data that once the vaccine is drawn up in syringes it can be stored at less." The actual administering of the vaccinations also presents few problems. It could, however, prove difficult to observe study participants as closely as required over several weeks, particularly if they live in large, busy cities like Monrovia.

Future funding also still needs to be clarified. "Of course that's a huge issue", says Seth Berkley, CEO of Gavi, the Vaccine Alliance in Geneva. There is still no agreement, he says, about who will pay the mass production of the vaccine or for its administration in Africa.

Gavi's work is funded by both government grants and private donations; its goal is ensuring that poor countries are able to afford life-saving vaccines, against measles or polio for example. Now, it is extending its scope to include Ebola. "We are currently negotiating with donors and the pharmaceutical industry", says Berkley.

A so-called placebo-controlled vaccination study has been planned for Liberia, calling for volunteers to be randomly injected with either one of the two candidate vaccines, or with a placebo. Results will then be compared at the end of the study period. If everything goes well, Ballou, "it would only take eight to 12 weeks to prove efficacy."

The study's design follows established scientific principles, but some question whether they should be applied in the case of Ebola. For Doctors Without Borders, which is focused on testing medications rather than vaccines, it is inconceivable that patients in the organisation's treatment centers would be administered placebos.

"Our health workers would not accept this," says Annick Antierens, who coordinates Ebola studies for Doctors Without Borders. "Just imagine what this would mean: giving sugar pills to someone who is fighting death and vomiting very hard. I would refuse this."

The doctors' concerns are understandable, which is why the organization has opted for a different study design which, however, has the disadvantage of not being able to provide unequivocal results.

"Currently about half of the patients in our treatment centers survive. If we administer the drug, and two out of three patients survive, we'll be very happy, and we will consider this a sign of success. The drug will then be tested further in a considerably larger study," explains Antierens. "If four out of five patients receiving the treatment survive, that would be the jackpot, and we'd then quickly expand the study to additional centers."

Doctors Without Borders intends to test the anti-viral drugs brincidofovir and favipiravir as well as experimenting with treatments involving serum from surviving patients, whose blood contains Ebola antibodies. The organisation carefully selected these three therapies: "We wanted to use drugs that have a direct effect on the virus and can be made available quickly in large quantities," says Antierens.

But it is not only reputable mainstream medical experts who are seizing the opportunity. For German homeopathic specialists, the epidemic also provides an opportunity to obtain evidence for their as yet unproven methods. According to the international homeopathic organisation, the Liga Medicorum Homoeopathica Intemationalis, a delegation of homeopathic doctors was dispatched to the worst affected regions in Liberia in order to treat infected patients with globulins. "We are blessed to have 110 homeopathic remedies in triple to quadruple potency", writes Ortrud Lindemann, head of the delegation, by email from Monrovia. "We are called upon to help the people of Liberia with homeopathic remedies in their fight against Ebola."

Government officials in Liberia, however, did not share the German healers' enthusiasm and prohibited homeopathic specialists from treating Ebola patients. But the homeopaths were not discouraged. Supporters of their mission are already considering sending another team of globulin-bearing homeopaths to West Africa. 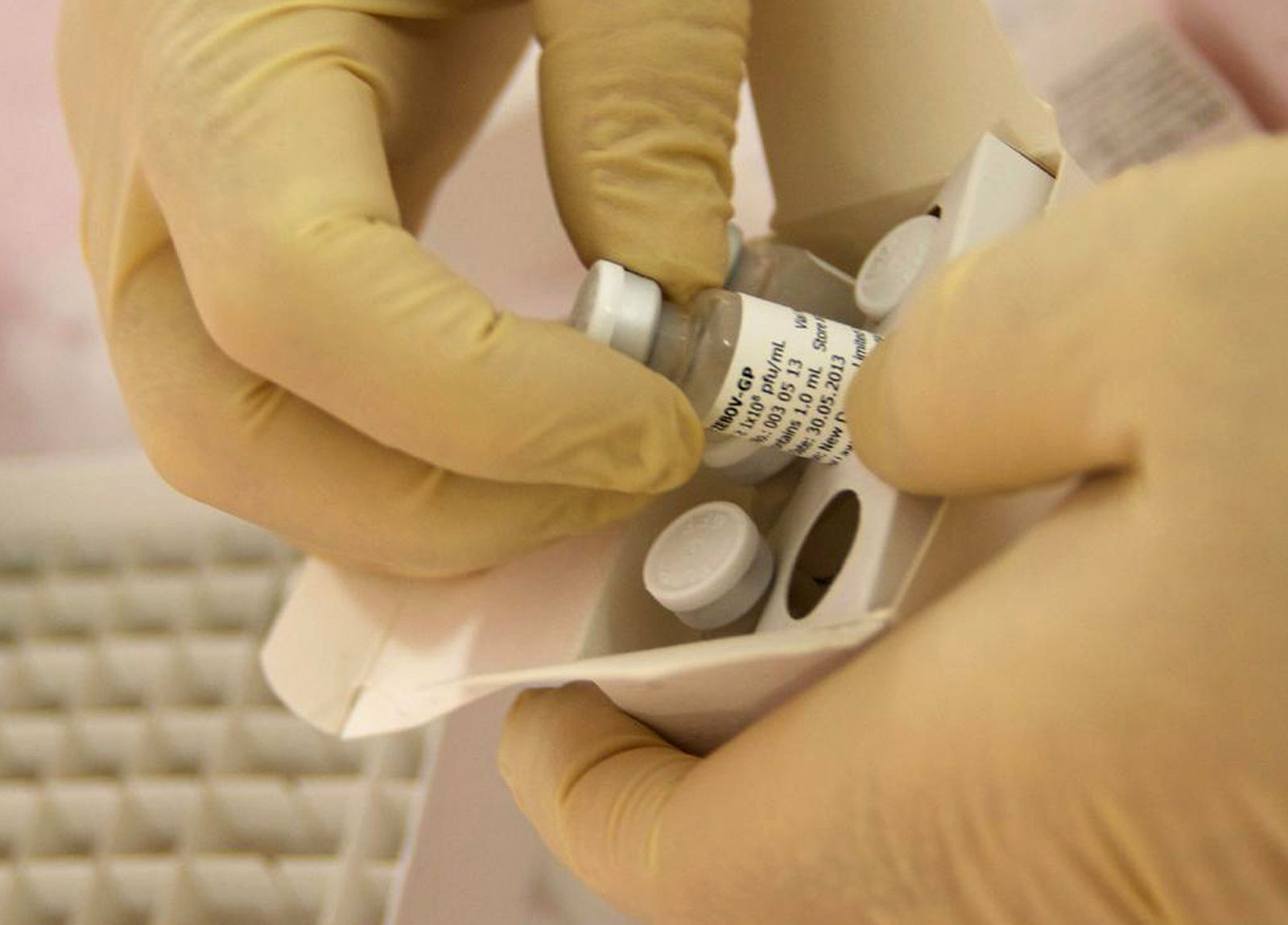 The search is on for an Ebola vaccine, with labs around the world participating. This image is from a lab in Winnepeg, Canada.