With war, terror, debt drama and mass migration, 2015 was a year of crises and urgent problems. For politicians, it was a year of continual crisis management, often with uncertain outcomes. Many of the blazes have yet to be extinguished, but the greatest challenge is yet to come. This year's crises may have been staggering, but at least they were limited in terms of geography. But for the next two weeks in Paris, the global community will be deciding on the fate of our planet, our future and the basis of life for all of humanity.

It's up to us. At the climate conference in Paris, we will have the opportunity to demonstrate whether or not we are serious about climate protection -- whether we will live up to our responsibility to ourselves and to future generations to keep Earth in an at least halfway healthy state. Whether we are prepared to alter our behavior as consumers, shifting away from the comfort and growth of our excessive, more is better, culture to more modest and austere lives. Or whether we will continue to exploit nature, with devastating repurcussions. Scientists have already demonstrated the grave consequences climate change is having on our planet.

Things are likely to get even worse. If we continue to spew the same amount of emissions from coal, oil and gas combustion into the atmosphere, the Intergovernmental Panel on Climate Change (IPCC) warns the climate could warm by three or four degrees Celsius or even higher by the end of the century. This would make parts of our planet uninhabitable through extreme droughts, famine, floods or simply because human beings are incapable of enduring sustained temperatures of 60 degrees Celsius (140 degrees Fahrenheit). The consequences of climate change could intensify conflicts in fragile countries and drive more people into flight. Climate change "is a threat to lives and livelihoods everywhere," United Nations Secretary General Ban Ki-moon wrote this week. He's right.

The massive summit in Paris (20,000 participants!) provides us with an opportunity to mitigate this scenario. Earth is likely capable of maintaining its ecological balance with a maximum warming of the atmosphere by 2 degrees Celsius. The delegates representing 195 countries at the Paris conference must now demonstrate that they truly take this goal seriously. They must agree upon a concrete timetable for transforming the climate protection plans they have submitted into binding rules by 2020. We can no longer accept declarations of intent -- particularly not those that are circumvented using tricks and deception. China, for example, which is pumping considerably more greenhouse gases into the atmosphere than it previously admitted. But the summit also needs to send a message to large corporations like Volkswagen, which in their manic thirst for growth deceive their customers and violate hard-won environmental standards. A clear message must be sent that this kind of behavior will no longer be tolerated.

The delegations dispatched by Obama, Putin, Li, Modi, Merkel and Co. are negotiating the fate of our world. Now they have to deliver and prove that they have vision and determination -- as well as the courage to stand up to the corporations in their own countries and to teach their own people that they cannot carry on with their wasteful lifestyles. Courage is needed

If it creates the basis for a new global climate pact, then this summit has the potential to become a truly historic event. For that to happen, though, China and India must show a willingness to organize their economic growth in ways that are more environmentally sustainable. And Western countries that have achieved prosperity at the cost of the world's climate will have to reach deep into their coffers in order to provide the aid needed by developing and emerging economies for climate protection.

A fair and, above all, honest global emissions trading system could provide the prudent conditions needed for lasting climate change, one that is oriented around climate goals and places strict limits on the number of certificates that can be traded between companies. No matter what, the prices of these certificates cannot be allowed to be as low as they are in Europe right now. And exclusions from the trading system must no longer be permitted for individual industries, like the transport and agricultural sectors.

Ultimately, it's actions that will matter. The only thing that can guarantee the livelihood of millions is a treaty with binding, verifiable goals for CO2 emissions reductions and sanctions that can be imposed if its terms are violated. Germany's interests in such a deal are also great, for a courageous climate treaty would more sustainably limit future migration to Europe than any fences or transit zones ever could.

In Paris, it is time to go for broke in order to save the climate. 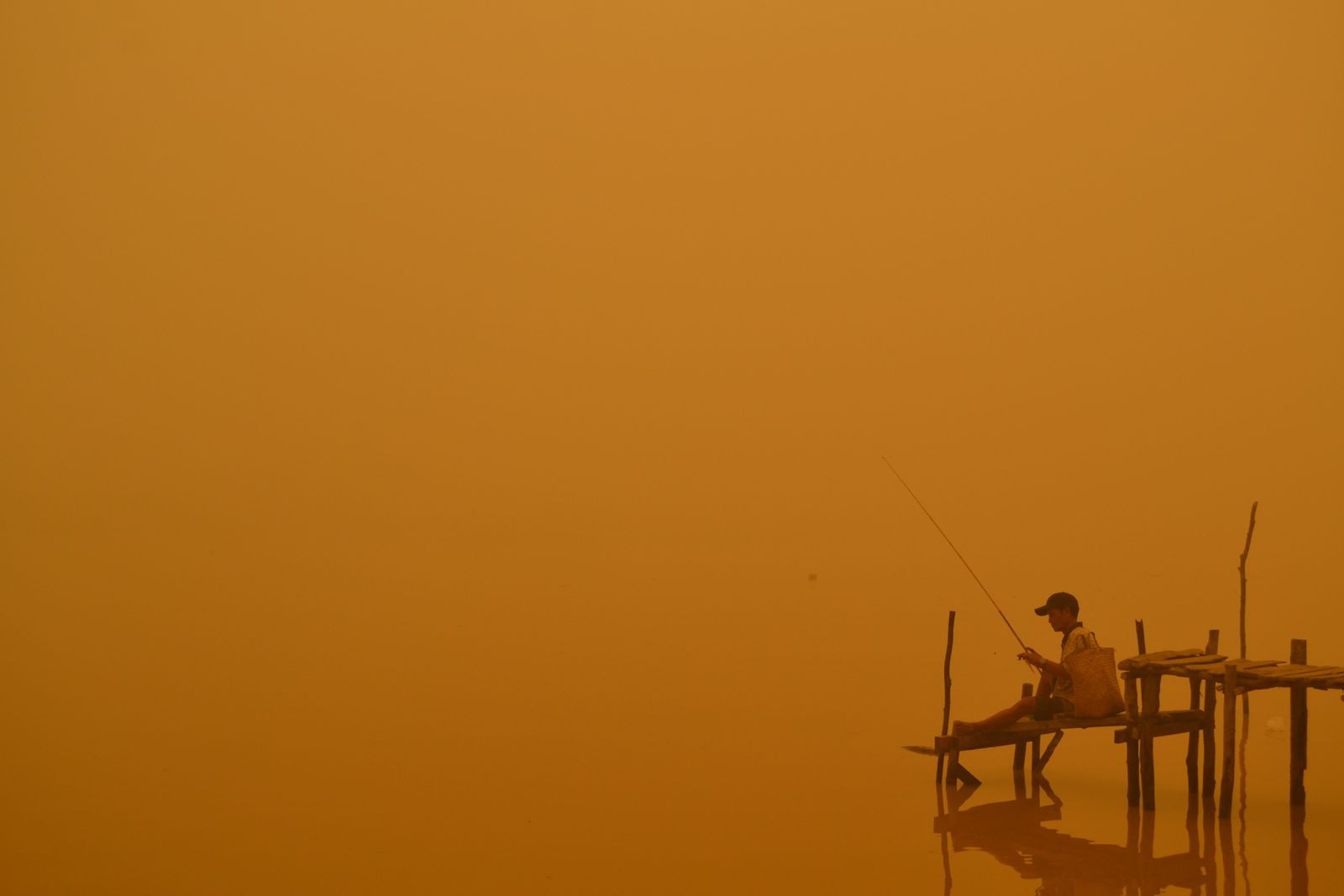 A man fishing in the haze of severe forest fires in Indonesia this autumn.