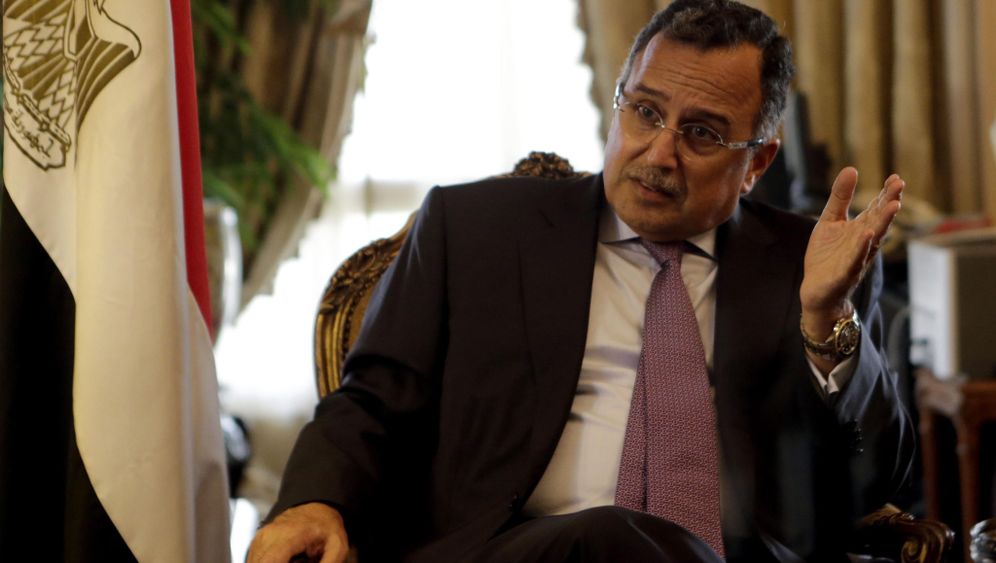 It is shortly before midnight when Egypt's new foreign minister, Nabil Fahmy, welcomes us to his large apartment in Cairo's affluent residential district of Zamalik, set on an island in the Nile River. Fahmy has just returned from a Cairo luxury hotel for the traditional breaking of the Ramadan fast. He strictly observes the holiday -- just as he did when he was Egypt's ambassador in Washington, without consideration for hosts at cocktail receptions. When he met with European Union High Representative for Foreign Affairs Catherine Ashton last week, she wasn't even served a glass of water. "The meeting was dry but constructive," says Fahmy. Now, he adds, he is prepared to "clear up a few misunderstandings, including those among politicians in Berlin," about the latest developments in Cairo.

Fahmy, 62, has been the foreign minister in Egypt's transitional cabinet since mid-July. He is from a family of diplomats; his father served as foreign minister under former President Anwar al-Sadat, who was later assassinated. Fahmy was also the Egyptian ambassador in Tokyo and, most recently, the dean of the American University in Cairo. His nights have become shorter since he was appointed to his current position. "I wake up after four hours," he says. And then he can't fall asleep again, he adds, "because I'm so worried about Egypt."

SPIEGEL: Mr. Foreign Minister, are you ashamed to be part of a government that came into power through a coup?

Fahmy: On the contrary, I'm proud to serve my country in this administration. If I were interested in the office alone, I could have become foreign minister under (former President) Hosni Mubarak. But I didn't want to become too close to that president. The position was offered to me two more times since his ouster, and I turned it down both times. But after the events of July 3…

Fahmy: …I no longer wanted to abdicate my responsibility. As a patriot, I had no other choice. Former President Morsi refused to entertain calls for new elections and wanted to establish an Islamist regime. We couldn't allow that, so we turned to the military.

SPIEGEL: But Morsi's removal from office isn't in keeping with the rules of democracy.

Fahmy: It was certainly an unprecedented event. But would the German government turn a deaf ear if 20 million people protested against it in the streets of Berlin? That's what Morsi did. He only paid attention to his Islamist clientele, expanded his power and pursued his own agenda. By removing him from office, the generals were defending the rights of a large majority of Egyptians. They had no other way of forcing this president out of office. That's why it wasn't a military coup.

SPIEGEL: Still, you forced a democratically elected president out of office.

SPIEGEL: Are you trying to compare Mohammed Morsi with Adolf Hitler?

Fahmy: I just want to point to the dangers we saw. And to put a stop to that development, we asked the military for help -- in the name of millions of Egyptians.

SPIEGEL: So voting with one's feet is more important than at the ballot box?

Fahmy: Our message is that political leaders are accountable to the people. In the case of both Mubarak and Morsi, Egyptians took a clear position: Listen to our voices and react to our demands, they shouted. The other message from Cairo is that a revolution without violence is possible.

SPIEGEL: The revolution is anything but peaceful at the moment. There have been bloody street battles between Islamists and security forces. Do you know how many people were killed since Morsi was overthrown?

Fahmy: I mourn every death that these conflicts have claimed. Nevertheless, when measured against the historic process we are currently experiencing, we can still call it a peaceful revolution. We are in a very delicate phase. But the judgments some of our friends in the West are making are unrealistic. After decades of dictatorship, we are now experiencing the transition to democracy. But you are using standards that perhaps apply in your political systems.

Fahmy: Such excesses are a consequence of political polarization. Passions are inflamed on both sides. Fundamentally different social concepts are colliding. We Egyptians are in the process of seeking a new identity for the 21st century. Who are we? What do we want? What role should faith play? How about politics? And how are Islam and politics compatible with each other? Where do we draw the line between Islamic and Islamist? These questions couldn't be raised for decades. Now we are searching for new answers, but we haven't yet learned how to do so while dealing with each other in a respectful manner.

SPIEGEL: So the bloody confrontations are the price for this process of self-discovery?

Fahmy: We do not shrug off these incidents. The attorney general has announced a full investigation. We will find out who shot at whom.

SPIEGEL: According to independent eyewitness accounts, including those from human rights activists, the culpability lies with the security forces that fired into the crowd. Is an apology from the government overdue?

Fahmy: I'm familiar with those reports. But there are also other accounts, such as that of Interior Minister Mohammed Ibrahim, who claims that his forces only used tear gas.

SPIEGEL: And you believe him?

Fahmy: I don't speculate over guilt and innocence. That is a case for the courts and it's in good hands with the attorney general. But independent of that, the incident is a tragedy.

SPIEGEL: Interior Minister Ibrahim built his career within Hosni Mubarak's security apparatus. This isn't the first time he has been accused of using excessive force. Has the old system of oppression returned?

Fahmy: Don't leap to conclusions. According to our security forces, we now know that there have never been as many unregistered weapons in circulation as there are now. And when so many people are carrying rifles and pistols, it isn't as easy to assign blame.

SPIEGEL: What does the interior minister mean when he says that it was a mistake to dissolve Mubarak's security apparatus?

Fahmy: The interior minister probably meant that those employees who used to deal with extremist groups and terrorists have left in the last two and a half years. These people are now needed to obtain information. But old systems and good-old-boy networks will not be reactivated. We aren't going backward. We remain true to our plan to develop a democratic society. But one of the basic conditions is that we have the security situation under control.

SPIEGEL: Nevertheless, there seems to be a witch hunt of sorts underway against members of the Muslim Brotherhood and their sympathizers.

Fahmy: It cannot come to that. The reconciliation process is very important to us. Did you know that we have a minister devoted exclusively to that issue?

SPIEGEL: Gen. Abdel-Fattah el-Sissi, the defense minister and army chief, represents more of a heavy-handed policy. Aren't liberal opinion leaders like you and Nobel Peace Prize winner Mohammed ElBaradei, who was named vice president, merely serving as a fig leaf for the generals?

Fahmy: I don't have that feeling. When the debate over our constitution begins, it will be about more than just the status of religion. It'll also be about the role the military plays in the future. We will have a serious discussion with the generals about that.

SPIEGEL: EU High Representative for Foreign Affairs Catherine Ashton was just in Cairo, where she acted as an intermediary. Was it helpful?

Fahmy: The visit was not well received among many Egyptians, who saw it as interference in our internal affairs. She was sharply criticized, in particular, for visiting former President Morsi, who is being held in a secret location. But our government accepted it. We are fundamentally open for visitors, and therefore we had no objections to Lady Ashton's request. The attorney general, who has launched an investigation against Morsi, will decide on future visits.

SPIEGEL: Morsi is apparently being investigated for escaping from prison with the help of terrorists during the revolution in early 2011. What exactly are the charges?

Fahmy: I don't know. There are probably various allegations. But it is already clear that if there is a trial, the case will not be heard by a special court, but by a regular court with the proper jurisdiction.

SPIEGEL: German Foreign Minister Guido Westerwelle, who characterized your second revolution as a "major setback for democracy," visited Cairo last week shortly after Ashton's visit. Were you pleased to receive him?

'We Need the Support of the German Government'

Fahmy: Mr. Westerwelle asked if he could come, and we were pleased about his visit. Germany is an important partner. But the Germans, in particular, are judging us in accordance with their own standards, and that leads to false assessments. That's why it's important to us that you understand us correctly. We need the support of the German government on our road to democracy.

SPIEGEL: At the moment, however, the military and security forces are preparing to clear the protest camps of the Muslim Brotherhood and its supporters.

Fahmy: We have to restore law and order, which is why we cannot allow central squares to be occupied for weeks.

SPIEGEL: There is new bloodshed every time protests are cleared. When will you say: I will no longer support this?

Fahmy: That personal limit is not marked by casualty figures. It's imperative that more deaths are avoided. That's why our government has offered the occupiers of intersections in the university district and near the Rabaa mosque the opportunity to leave without being harassed. Interim President Adly Mansour has stressed that no one will be prosecuted.

SPIEGEL: The Muslim Brotherhood supporters want to expand their protests. Each new martyr strengthens them in their role as victims of an anti-Islamic conspiracy.

Fahmy: I'm also skeptical that we will convince the Brotherhood to support our process of reconciliation. But at least we have to try. This country is supposed to have a new constitution in four months. In no more than nine months, we want to have a new parliament and a democratically elected president. The Brotherhood's party should also run in that election.

SPIEGEL: Why should the Muslim Brotherhood participate? So that the military can overthrow their president once again, if they win a second time?

Fahmy: The next Egyptian president will be bound by a constitution. Morsi wasn't, and that was a historic mistake.

SPIEGEL: Mr. Fahmy, we thank you for this interview.