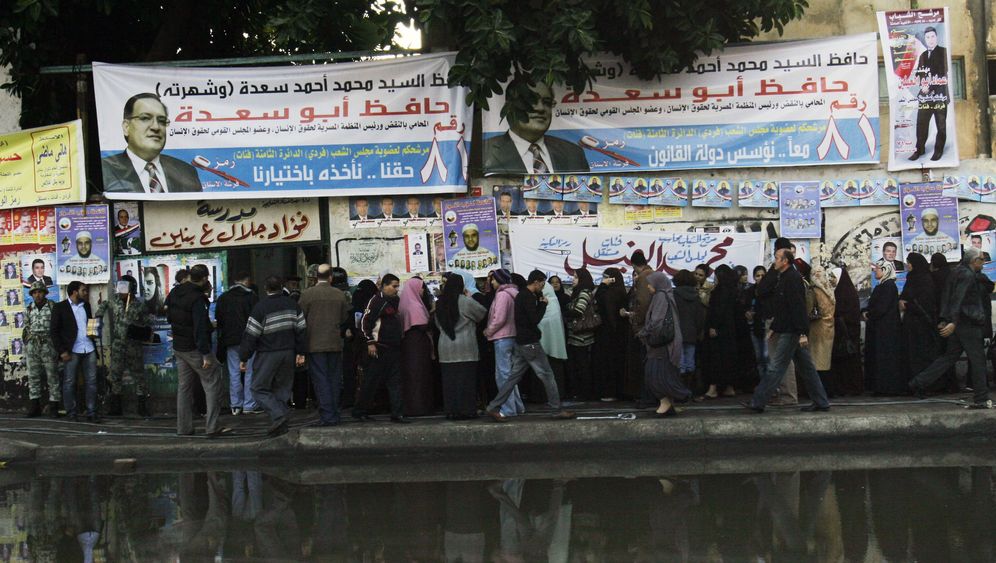 When Hosni Mubarak became president of Egypt in 1981, Mahmoud Ali was just a normal Egyptian teenager. He was, though, a bit more religious than others. During the 30 years of Mubarak's iron-fisted rule, Ali became one of the many in his country who experienced the regime's despotism first hand.

His beliefs considered suspect, Ali was repeatedly taken into custody, often arrested at dawn and whisked away. He would be imprisoned for a week at a time, hung up by his ankles and give electric shocks. But Ali did not turn his back on his faith, prayed regularly and eventually became an Imam. Along they way, he often took on tasks for the forbidden Muslim Brotherhood.

Ali was one of the thousands of Egyptians who, when protests erupted on the banks of the Nile in January, threw themselves into the struggle. Finally, it seemed, there was an opportunity to put an end to the hated Mubarak regime. "In the mosques where I lead prayers, I mobilized people to go out onto Tahrir Square," the 42-year-old Ali says. The day that Mubarak was forced to step down, he adds, was one of the happiest in his life.

Now, though, Ali is in eager anticipation of the next, greatest day of his life: "The day on which we will introduce Sharia law in Egypt."

Mahmoud Ali is one of the 15 million Egyptians who, according to conservative estimates, will cast their vote for the Freedom and Justice Party in the coming weeks. While there are no reliable public opinion surveys, forecasts indicate that the party, founded by the Muslim Brotherhood, could end up with 30 percent of the vote -- and thus become the largest group in Egyptian parliament. Some observers even think that the Islamist party might be chosen by up to half of the 50 million Egyptians eligible to vote. Either way, it is clear that, by the end of the long and complicated voting procedure, the Muslim Brotherhood will emerge in a position of power.

The Muslim Brotherhood was founded in 1928 as a charity organization, but the group was forbidden in Egypt for much of Mubarak's rule due to its Islamist leanings. Its followers and sympathizers faced constant state persecution. Today, the group is the most important representative in the country of political Islam -- though it remains unclear exactly what political goals they are pursuing. It is one of the peculiarities of this election that it will likely be won by a party that seems not to quite know what it stands for.

Many have suggested that the Muslim Brotherhood might seek to emulate the Justice and Development party of Turkish Prime Minister Recep Tayyip Erdogan, which combines Islamist leanings with a market economy -- a model prized in many Muslim countries in North Africa.

But Mahmoud Ghoslan, a spokesman for the Muslim Brotherhood, told SPIEGEL ONLINE that they aren't interested. "No, we don't want the Turkish model," Ghoslan said. "In Turkey, women may go to university without a headscarf. They have adultery and homosexuality. We will not allow that in Egypt. Egypt is a Muslim country. The Sharia, the Muslim legal framework, must be the foundation for everything."

Sharia, though, isn't enough of a party platform -- and the Muslim Brotherhood have yet to provide convincing answers to questions as to how they plan to stabilize the country. Instead of explaining how his group intends to revive Egypt's stalled economy, Ghoslan complains about Western prejudice. "Everyone says that we are hardliners. But we are wise, even-tempered and moderate. Of the nine members of our leadership council, five of them received their Ph.D. in the US. We are open-minded," Ghoslan says.

Despite follow-up questions, Ghoslan declines to provide details. Egypt isn't Iran, he insists, and Hamas is only an offshoot of the Brotherhood -- and not one they want to emulate. "We will develop our own model," he says.

In the run-up to the election, the Brotherhood promised not to occupy more than half of the seats in Egyptian parliament even if they won more than a 50 percent share of the vote. The goal, they said, was to demonstrate that they were not aiming toward the political domination of Egypt and to counter Western concerns regarding the radicalization of politics in the country. A further concern was that the country's current military leadership could hesitate to hand over power should the Islamists emerge from the elections with too much power. The current plan calls for a civilian government to take over power in June 2013.

Most of all, though, the goal was damage control. Egypt faces massive problems, and whatever party emerges victorious from the elections, it will have to force through significant -- and painful -- reforms, some of which are likely to be unpopular. The Muslim Brotherhood is likely eager to avoid too much of the blame for the changes to come.

For now, though, the Brotherhood's popularity is high, with religious-minded voters such as Mahmoud Ali forming the core of their support. But in a country where every fourth person lives under the poverty line, the group's years of charity operations are a vital source of political strength. The Muslim Brotherhood has often been the only social safety net around, and the gratitude among beneficiaries will likely be expressed at the polling stations.

In the end, though, it will likely be something as simple as name recognition that will help the group the most. Some 50 parties are registered in the election, which will take place in several stages over the next three months. The name Muslim Brotherhood is by far the most widely recognized.