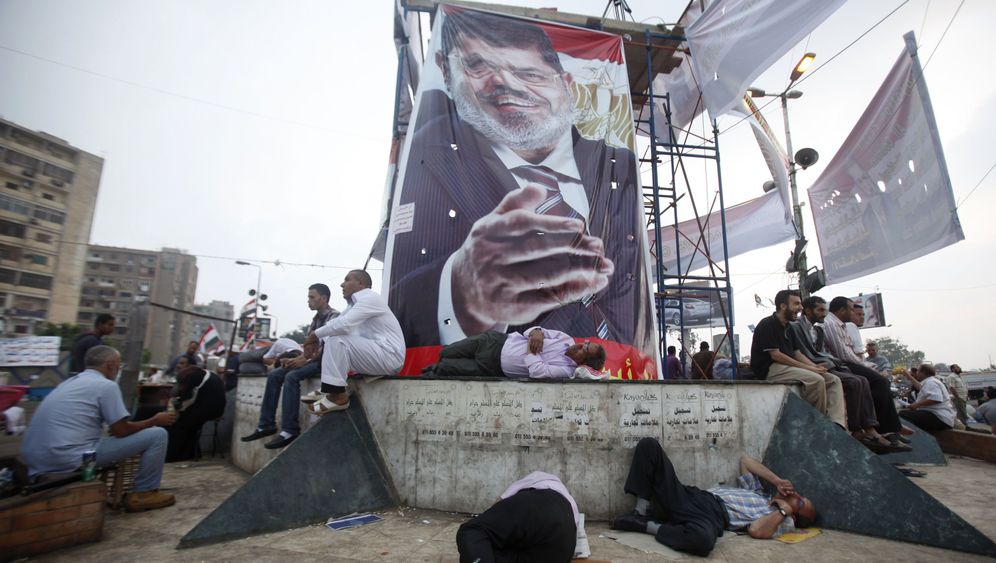 The announcement came less than a full day after the government had announced far-reaching decisions as to how the country would proceed following last week's removal of Mohammed Morsi, its first democratically elected president. The rules of the transition were defined by constitutional decree, and for the first time, a timetable was laid out. The Al-Ahram newspaper has even published a scanned version on their website.

The transitional government plans to keep things moving at a rapid pace, probably to outpace critics and quickly set new precedents. Morsi was overthrown just over a week ago, and has since been detained at an undisclosed location without contact with the outside world. Meanwhile, his supporters continue to demand that he be returned to his post, and have planned their latest protest for Tuesday evening. Leading members of the now-weakened Muslim Brotherhood, the Islamist movement that backs Morsi's Freedom and Justice Party, have rejected the timetable, which would be used until new elections could be held.

The tight schedule is also meant to assuage concerns from abroad, where leaders are asking whether Egypt has strayed from its path toward democratization. The latest reaction from Washington was cautious -- the White House said it was taking time to review the situation.

It's an extremely ambitious schedule. In just four months, a new constitution is to be written. This contrasts starkly with the protracted constitutional negotiations during Morsi's administration. Beginning in 2011, the government fought for months without results. By November 2012, Morsi had lost patience and forced through a new constitution that conformed to the Islamists' expectations.

It appears that the interim government now wants to fast-track its agenda too. But this time it isn't the Muslim Brotherhood, but legal experts -- members of the old guard -- who are pulling the strings. The judges who run Egypt's courts made their careers under autocrat Hosni Mubarak, before he was deposed in the revolution of 2011. Now it's up to those who worked for the despot that ruled Egypt for decades to revise Morsi's constitution, which was passed via referendum.

Once again, the constitution is to be rubber-stamped by a referendum in about four months. Within two months of that, there will be a parliamentary election. Then, one week after the parliament begins working, they will announce the date of the presidential elections. It's questionable whether keeping to such an ambitious schedule will be possible, though. Not only does the organization of free and fair elections take time, but election laws don't even exist yet.

It's also worth noting what the new constitutional decree reveals about the current balance of power. The ousting of Mohammed Morsi was endorsed by a large cross-section of Egyptian society -- a surprising alliance of liberals, Christians, Mubarak supporters, Salafists, Al-Azhar scholars and the authoritarian military, who were often united only by their will to overthrow Morsi. Now it's the generals who decide behind the scenes how things go forward. The decree shows which civilians they consider among their most important partners.

It wasn't only Mubarak's judges who were massively reevaluated. Surprisingly, the constitutional decree contains significant concessions to the Salafists, the arch-conservative rivals of the Muslim Brotherhood. Mubarak largely let the Salafists, then a non-political social movement, do as they please, hoping they might divide and weaken the Islamist camp.

It is clearly spelled out in the first article of the constitution that Egypt is a country in which "the principles of Islamic Sharia" are the "primary source of legislation." It explicitly states that the country's laws should not just adhere to the universal values of Sharia, but also to its interpretation by religious scholars -- an extremely Salafist-friendly definition. This was one of the liberals' main criticisms about the constitution drawn up under Morsi. The fact that it is being tacitly adhered to now is a huge concession to the Salafists.

Another one of the liberals' major points of contention with Morsi's constitution is also being sanctioned by the decree. The Islamist constitution limits freedom of religion to the adherents of Islam, Christianity and Judaism, thus discriminating against Egypt's Bahai minority. This inequality is once more enshrined in the transitional government's constitutional decree.

The decree is problematic on several other points. It contains a giant loophole that effectively serves to curtail fundamental rights: Freedoms apply only as long as a law doesn't prohibit it.

Whether it will be possible to limit the "transitional period" to about half a year, as the schedule suggests, remains to be seen. For the time being, all government powers -- executive, legislative and judicial -- are concentrated under the nominal interim president, Adly Mansour. He, in turn, is dependent on the military that put him in power.