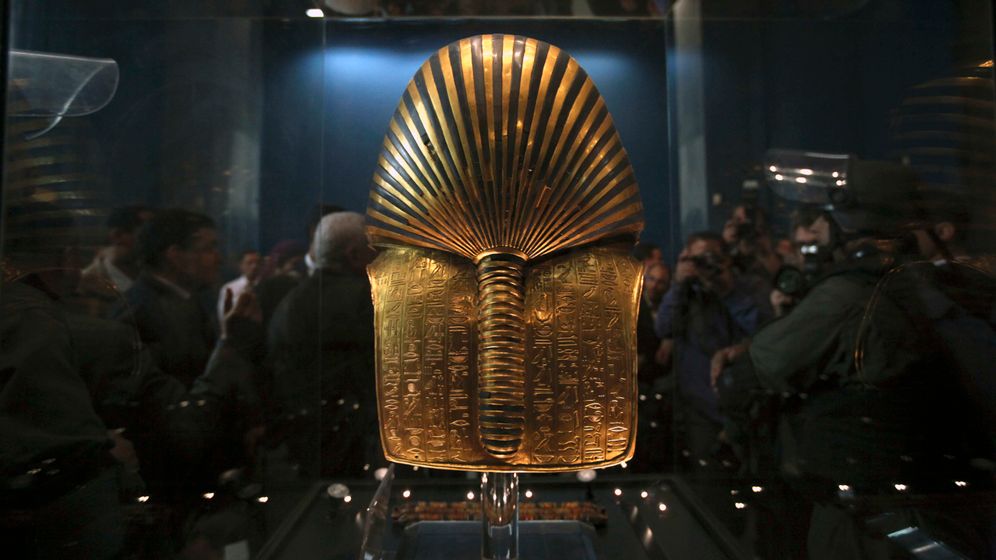 SPIEGEL ONLINE: Minister Hawass, during the mass protests three weeks ago, there was talk that the Egyptian Museum in Cairo had been broken into. At first, you claimed that nothing had been stolen, but later admitted that several items were missing. How great is the damage?

Hawass: When I went to the museum on the morning of Jan. 29, I found out that they had opened the glass showcases. We were able to ascertain that 30 showcases had been broken but only 20 of the 70 exhibits are in a bad condition and need restoration. Then we investigated further and found several pieces to be missing, including a part of a golden Tutankhamun statue. Some objects have been found in the meantime, but eight are still missing.

SPIEGEL ONLINE: Where were they found?

Hawass: We found some pieces outside the museum between the National Democratic Party building and the museum shop. And on Thursday the mother of a 16-year-old boy called to say her son was in Tahrir Square and found priceless statue of the Pharoah Akhnaton behind a garbage can and took it home. I received it yesterday. That was the happiest day of my life!

SPIEGEL ONLINE: Is the statue unharmed?

Hawass: The statue was found in a good condition. Those who broke into the museum were not professionals, they were only looking for gold. And it was not just in Cairo; there were also two burial chambers broken into in Sakkara and Abusir, and there the damage was visible. Overall, we have to thank God that we got off relatively lightly.

Hawass: Imagine a city with millions of residents where complete lawlessness reigned for several hours. Where the prisons were opened and there were actually no more police. That is what happened in Cairo on the evening of Jan. 29. A lot more could have been robbed and destroyed in this horror scenario.

SPIEGEL ONLINE: Should the museum not have been better protected though?

Hawass: What happened in Cairo could also have happened in New York, in London, in any museum in the world. As I said, considering the circumstances it is a miracle that more was not stolen. By the way, I also asked myself where were the security forces, where were the police? Why was no one protecting the museum?

SPIEGEL ONLINE: There have been demonstrations outside your office for days now. Some archaeology students are demanding your resignation because you are considered to have been too close to the old regime. Are the accusations justified?

Hawass: Listen, these young people are demonstrating for one single reason -- because they want a job! Nothing more than that. Thousands of young archaeologists in the country are unemployed. We have way too many faculties churning out archeologists -- many more than we need. Now these people see their chance to demonstrate loudly.

SPIEGEL ONLINE: Their desire for work is certainly understandable.

Hawass: Yes. But my administration has no money. Where should I find these jobs? I do not have the capacity to employ 500 new people. And we are talking about thousands here!

SPIEGEL ONLINE: But the demonstrators are also accusing you of being a lackey of Mubarak.

Hawass: I am not a leader. I am not a politician. I'm a scientist. I demonstrated with the people in Tahrir Square and they love me. Those people need a job, nothing else. Some of them would like to accuse me of other things, but it is a disgrace that the foreign press takes their words as truth. I have dedicated my life to the museums and treasures of Egypt and the Egyptians love me for it.

SPIEGEL ONLINE: What sort of relationship did you have with the former president?

Hawass: I will tell you quite openly: Mubarak was not a bad man. He was a war hero and a man of peace. He had his merits. But I can also tell you that it was time for him to go. I cannot accept that a leader would cling to power for so long. But we do not need to insult him now that he has stepped down. Everyone is insulting each other. Why this lack of respect?

SPIEGEL ONLINE: So you think the protest movement has gone too far?

Hawass: No! No! The demonstrators on Tahrir Square have done a wonderful job. I was there on the streets. I am proud of these young people with their flags of freedom and democracy. But now, different people are protesting. Every one now says what suits him. Every one can say to another: you are a thief! You are a spy!

SPIEGEL ONLINE: Are you taking demands for your resignation seriously?

Hawass: I could leave this job tomorrow! But Egypt would lose and the world would lose. I do not need to be a minister! I am a person who climbs into burial chambers, who digs in the sand. In normal circumstances, I would not have taken this job. But we are in an exceptional situation. It is now about clearing up the damage and better protecting Egypt's antiquities in the future. And that is my responsibility.

SPIEGEL ONLINE: Will you really continue to demand that Berlin return the buts of Nefertiti considering the current insecure situation in Egypt?

Hawass: Yes of course I will. This fight will go on. Nefertiti belongs to Egypt. But that is a completely different issue. Now it is about returning to normality, opening the museums again and getting the tourists back -- and the foreign archeologists who have left the country. I am calling them to come back today.

SPIEGEL ONLINE: Can you reassure the tourists and archeologists?

Hawass: Yes I can. The situation is safe, Egypt is safe.