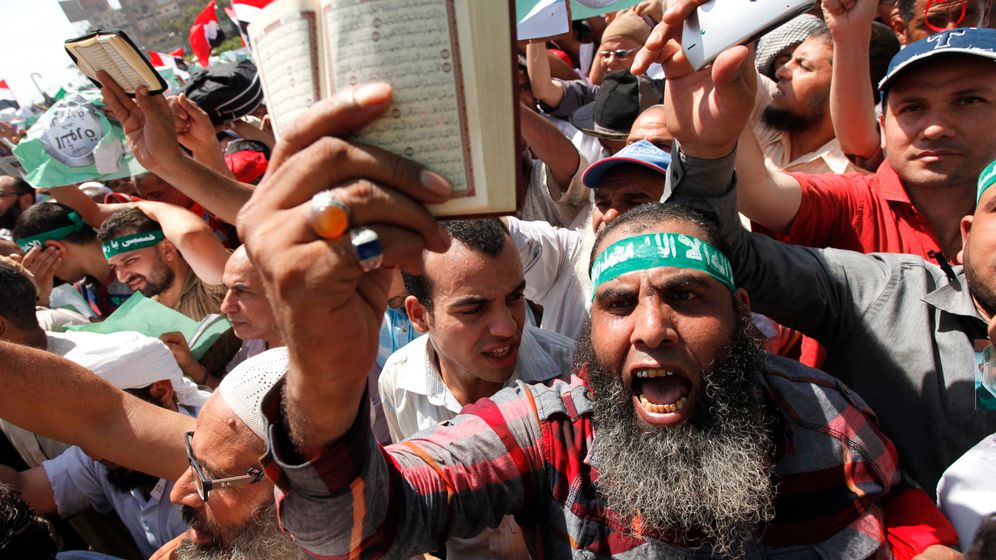 On Monday, the Egyptian Army issued President Mohammed Morsi an ultimatum: He has 48 hours to come up with a plan for the country or it will intervene with one of its own. The tens of thousands of anti-Morsi protesters who had been demonstrating since Sunday in Tahrir Square broke out into cheers when the ultimatum was announced.

Yet Morsi has shown no indication that he is prepared to back down. On Tuesday, despite widespread dissatisfaction with his rule and a crumbling cabinet, he released a statement of his own, saying that he will continue on the course he has charted. As if to underline Morsi's increasing isolation, his foreign minister, Mohamed Kamel Amr, threw in the towel on Tuesday morning. He is the sixth member of Morsi's government to quit over the escalating crisis.

Disillusionment with Morsi, a member of the Muslim Brotherhood and Egypt's first democratically elected president, is widespread following the past year of his rule. Results, after all, have been disastrous. Instead of freeing his country from an ongoing political and economic crisis, Morsi has deepened the suffering. Instead of bringing reconciliation to Egypt, he has sown discord. Mass protests have repeatedly shown how polarized the most populous country in the Arab world has become. Indeed, just on Sunday, several people lost their lives in violent anti-Morsi protests in the heart of Cairo.

"My country has never been as divided, frustrated and radicalized as it is today," says German-Egyptian author Hamed Abdel-Samad. 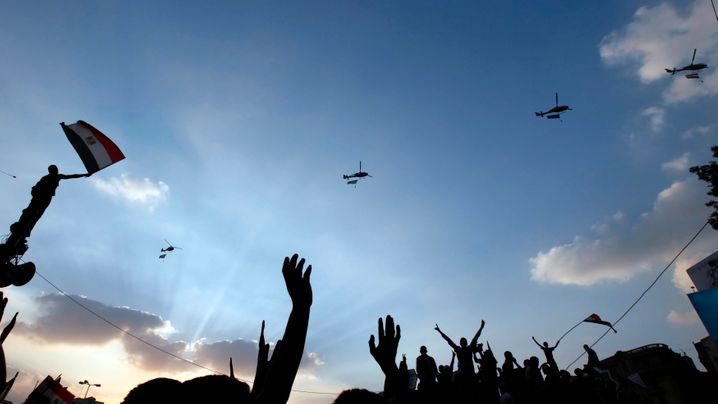 Last June, Morsi prevailed over an ally of ousted autocratic ruler Hosni Mubarak, but by only a very slim margin. Many Egyptians, who have no sympathy for Morsi's Islamists but are even less interested in a return to the Mubarak era, gave him a chance.

Now, though, such generosity has vanished. According to a recent poll, only 28 percent of the population supports Morsi today. And quite a few Egyptians are nostalgic for the old leadership. "We were better off under Mubarak," says the owner of a souvenir shop in Giza. "We had a regular income, the country was safe and tourists came."

Morsi isn't to blame for all of his country's problems. The economy was already ailing before he came into office. But the president, said Cairo business journalist Saad Hagras, has neither ideas nor concepts. So far, Morsi has delivered nothing but vague promises, such as the pledge to restore stability and jump-start the economy within 100 days. Now, with his government crumbling around him, it seems clearer than ever that Morsi does not have what it takes to lead the country forward.

With a small majority and low voter turnout, the ruling Muslim Brotherhood pushed through a constitution last year. It is a document that bears the clear imprint of Morsi's Islamists and many Egyptians are strongly opposed to it. To quickly secure even more leverage, Morsi granted himself special presidential powers in late 2012, triggering unrest throughout the country.

And the violence has continued. Street battles between Islamists and anti-government protesters have become common, and clashes between different religious groups are also on the rise. The police seem hopelessly overwhelmed.

Egyptians are especially irate over the miserable economic situation, as the prices of bread, gasoline and natural gas continue to rise, despite generous subsidies. The Egyptian pound is in freefall. And there are frequent power outages, because the government lacks the money to import electricity.

Although the official unemployment rate is only 12 percent, says economic expert Hagras, the figure is relatively insignificant, because most Egyptians already worked in the shadow economy. Almost one in two Egyptians lives below the poverty line of $2 (€1.54) a day. The population is growing, and so is the number of high-school graduates, but most lack jobs or prospects. To create sufficient numbers of jobs, the economy would have to grow by at least 8 percent a year -- compared to the most recent growth figure of only 2 percent.

The tourism sector, the country's most important source of income, is in especially bad shape. Some 14.7 million tourists visited Egypt in 2010, while less than 10 million came in 2012. "It's a complete nightmare," says Iman Garhi, the owner of a hotel on the Red Sea. "To attract any guests at all, we have to operate at dumping prices. But I can't make any money that way, and I can't pay off my loan at the bank, either. I'll probably go out of business."

Exploding government debt is one of Morsi's biggest problems. The president has been negotiating with the International Monetary Fund (IMF) for months over a multibillion-dollar loan agreement. In return, however, the IMF is demanding measures to clean up the government's finances, which would include cutting subsidies for fuel.

This would affect the poor most of all. Morsi has been reluctant to take such harsh steps, fearing the loss of his social base. But the longer he delays reform, the more difficult it becomes. "The president and his Muslim Brotherhood haven't understood yet how serious the situation is," says Cairo businessman Salah Higasi. "They're not concerned about the country, but about expanding their power. And they depend blindly on their financiers in the Gulf countries."

Thanks to generous loans, especially from Saudi Arabia and Qatar, Morsi is able to come up for air periodically. The Sunni sister states have approved several billion euros in loans in the last few months. This enables Morsi to focus on other things, such finding new allies, now that more and more citizens are turning their backs on him.

On June 15, Morsi attended a large rally in a Cairo stadium that was broadcast on Egyptian television. Speaking to 20,000 supporters, the president announced that Cairo was severing diplomatic ties with the regime of Syrian President Bashar Assad. Perhaps because Damascus is an ally of Iran, it didn't seem to trouble the president that the imams who spoke after him began fanatically agitating against Iranians and other Shiites, deriding them as "unclean" and as "infidels."

Eight days later, one of these "infidels," a Shiite cleric, entered the majority-Sunni village of Abu Musallam, near Cairo, where he and a group of fellow Shiites planned to celebrate an Islamic holiday. When the men and the teenagers of Abu Musallam found out, they formed a mob.They attacked the houses of Shiites with rocks and Molotov cocktails, dragged their screaming victims into the street and stabbed them with knives and swords. "Kill them!" the tormentors shouted. By the time it was over, four Shiites had lost their lives and dozens of men lay bleeding in the dust. A few police officers looked on but did not intervene. They only removed the bodies.

And Morsi's support for radical Islamists is not limited to silent approval. In a video recorded at the rally on June 15, Morsi embraces a man named Assem Abdel-Magid, a leader of the group Al-Gama'a al-Islamiyya. Abdel-Magid was partly responsible for the 1997 massacre of tourists in Luxor, where 62 people died. He was also one of the backers of the murder of former President Anwar al-Sadat in 1981. Egypt's current president has made the terrorist group socially acceptable. Three weeks ago, he appointed a member of Gama'a al-Islamiyya to be governor of Luxor. However, the man resigned when local citizens protested.

Abdel-Magid is an important ally of the president. Morsi has even tolerated a death threat Abdel-Magid made on TV against German-Egyptian writer Abdel-Samad, because he had supposedly insulted Islam. German Foreign Minister Guido Westerwelle called upon the Egyptian government to distance itself from the death threat, but Morsi remains stubbornly silent.

"Its close relationship with a former terrorist shows how morally bankrupt the Egyptian regime is," says Abdel-Samad, who now lives under police protection in Germany.

An umbrella opposition group began collecting signatures in late April to force the president to agree to new elections. The group, called "Tamarud" (Rebel), is an amalgamation of various dissatisfied entities, including liberals, Christians, those nostalgic for Mubarak and disappointed supporters of the Muslim Brotherhood. Tamarud has reportedly come up with more than 22 million signatures. It was they who organized the mass demonstration at Tahrir Square in Cairo on Sunday, the one-year anniversary of Morsi's inauguration.

Though the generals have claimed that the 48-hour ultimatum is not a coup, Morsi's supporters within the Muslim Brotherhood have taken it as such and risen to his defense. Senior Brotherhood figure Mohammed al-Biltaji urged Morsi supporters to "call their families in all Egyptian governorates and villages to be prepared to take to the streets" to defend Morsi's "legitimacy" as president.

"No coup against legitimacy of any sort will pass except over our dead bodies," he told an enthusiastic crowd of thousands in Cairo's Nasr district.

It's unclear exactly what will happen on Tuesday evening when the ultimatum expires, but it seems unlikely that Morsi will maintain his grip on power for much longer. 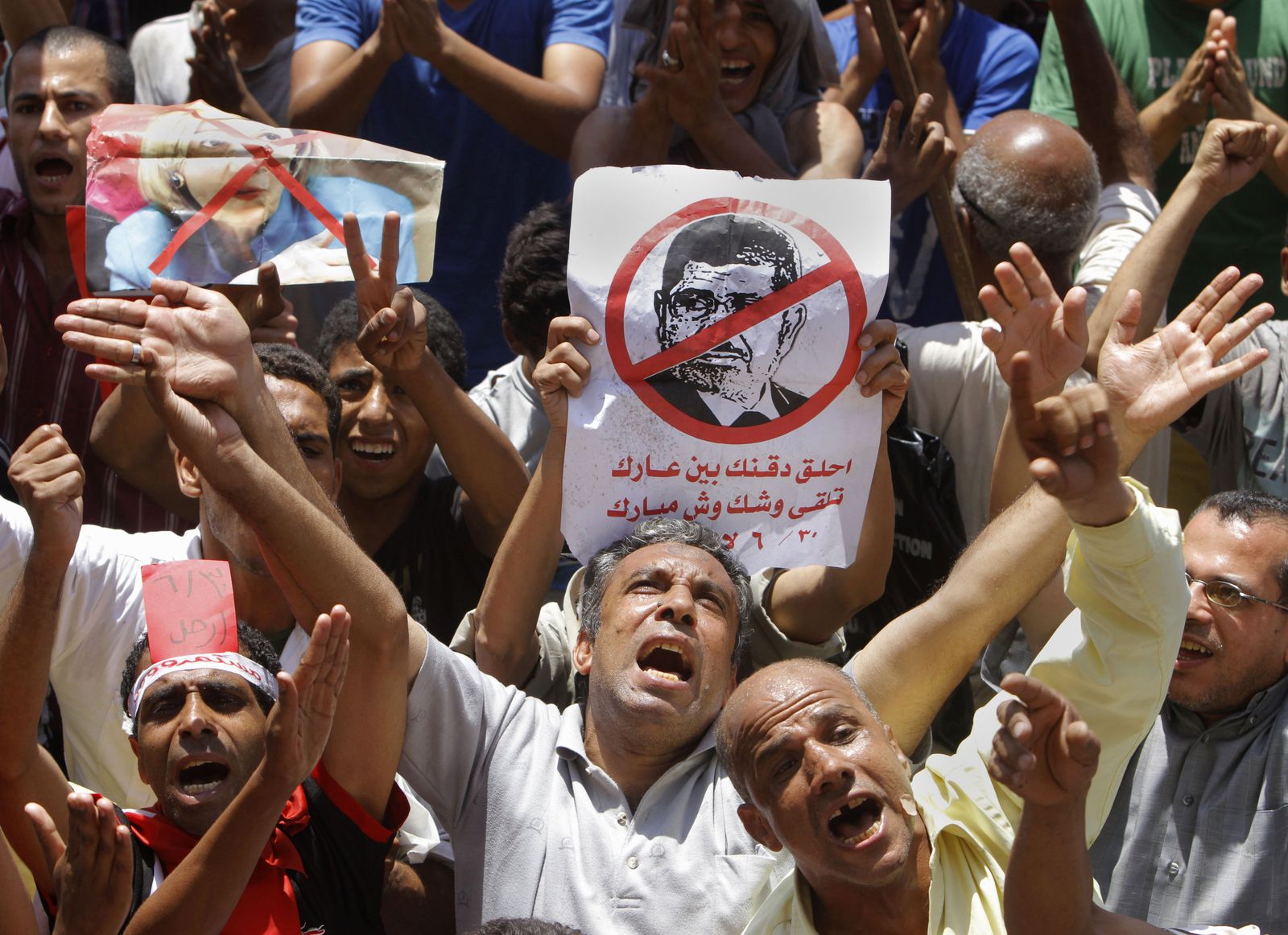 Mass protests repeatedly show how polarized the most populous country in the Arab world has become. Here, anti-Morsi protesters gather in Tahrir Square on June 28.