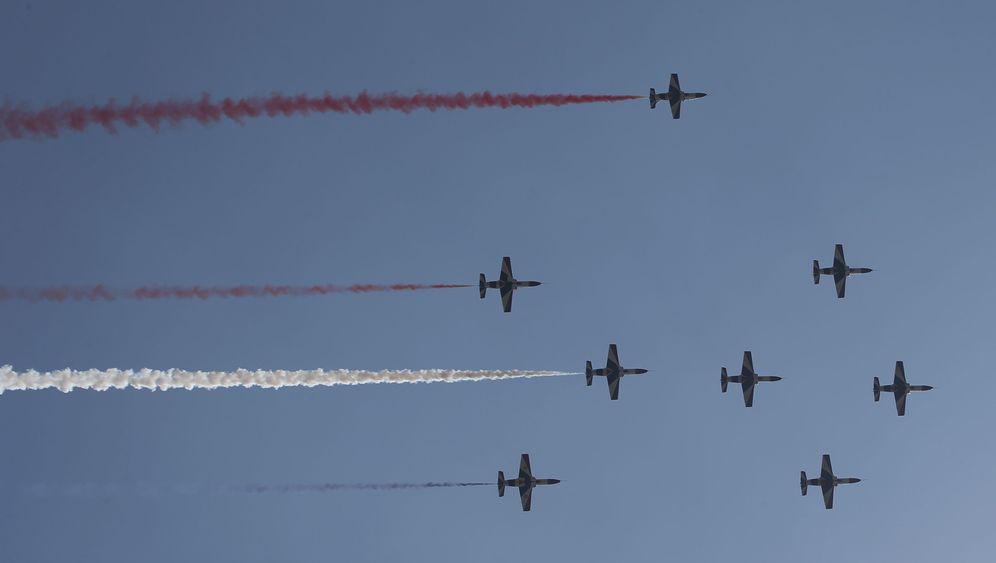 Photo Gallery: Egypt After the Coup

Toni Kalifa doesn't look much like a victim of the military coup d'état in Egypt. Clutching two smartphones in his hands, he's pacing back and forth in the lobby of a five-star hotel on the Nile River in Cairo -- and calls keep coming in. "No," he says. "We don't know what is coming next." Kalifa played a not insignificant role in the overthrow of President Mohammed Morsi, who was deposed by the military on Wednesday night. Ironically, though, he himself has become jobless as a result.

Before Morsi and the Muslim Brotherhood were shunted aside, Kalifa was the moderator of an immensely popular Egyptian television show called "The Era of the Muslim Brotherhood." His show was broadcast for an hour each day in primetime, and in every episode, he would play host to an Islamist guest -- whose ideology he would then proceed to mercilessly dismantle. Highlights from his show, aired by the private station Cairo and the People, are available on YouTube. It wasn't uncommon for his guests to become physically violent under Kalifa's incessant grilling.

On Wednesday evening, the disassembly of the Muslim Brotherhood was completed. Egyptian generals removed the Islamist organization from power, they shut down three Islamist television stations and they issued arrest warrants for 300 leading members of the group. In short, they sent the Muslim Brotherhood back to the underground where it has spent so much of its history. And they deprived Kalifa of his talk show guests.

"We were just about to start a new season. But now all of my guests are in prison," says Kalifa. Fourteen Muslim Brotherhood members who he had wanted to have on his show during the fasting month of Ramadan, which begins next week, are on the military's "Wanted" list. "The others will also be added," Kalifa believes, and his show could soon be history.

Still, Kalifa is not upset. Indeed, the events of the last few days have filled him with optimism of the kind that was on full display on Tahrir Square after Morsi was overthrown on Wednesday evening. Tens of thousands of people were on hand for the high point of the mass demonstrations seen in the Egyptian capital for days. When Defense Minister General Abdel-Fattah el-Sissi announced that Morsi had been removed from office and the constitution suspended, they erupted into cheers and fireworks filled the air. For months, the opposition had been fighting a losing battle against what they saw as the Islamists' attempt to consolidate power in their hands. Now, finally, they had managed a victory.

"My mission is accomplished," Kalifa says. He also says that he already has plenty of offers for new talk shows.

For the moment, he is optimistic that his next program will not have to be focused on exposing the ideology of those in power. He is hopeful that the opposition will be able to rise to power.

"In the first revolution, the opposition made many mistakes," Kalifa says. Opponents of Mubarak, he said, were unable to unite behind a single leader and, worse, many of those who took to the streets in 2011 simply retreated into their private lives once the autocrat was toppled. "Young people didn't want to get their hands dirty with politics," he says. Instead of helping to build a new society, they simply lobbed criticism from the sidelines. "They took to Facebook and Twitter, but they didn't take on any responsibility," Kalifa says.

Now, after "Revolution Number Two," as he calls it, he expects things to be different. "This time, the people were organized and the army was smart enough to share responsibility with them," says Kalifa. "I think that it will work this time."

Headwaiter Attef Abdelghalil is also full of hope on Thursday, but it is a different kind of optimism. For the last 25 years, he has served tea in the Café el Fishawy, but he has almost never had as little to do as in recent months. Fishawy is perhaps the most famous teahouse in the Egyptian capital and it is normally a magnet for tourists. But these days, hardly anybody finds their way inside; tourists have headed elsewhere.

For Abdelghalil and his colleagues, it is that development which has led them to question their past political beliefs. We spoke to several of the men working in Café el Fishawy shortly after the 2011 revolution and most of them said they intended to vote for the Muslim Brotherhood. "I voted for the Brothers too," says Abdelghalil. After three decades of kleptocracy under Mubarak, the Islamists seemed to be both honest and reliable.

Many thought the same, paving Morsi's path to the presidency one year ago. His Islamists likewise became the largest power in the parliament. "That was the biggest mistake that Egypt has ever made," Abdelghalil says now. Not only was Morsi unable to lure tourists back to the country, but "they ultimately only followed their own interests and did not work for the people as they had promised," he says.

Yet in contrast to Kalifa, he doesn't have much confidence in the opposition either. Rather, he believes that Egypt's experiment with democracy has failed. "The army should not be in a rush to give up power," Abdelghalil says, adding that he thinks new elections should not be held until three years from now. "Democracy isn't important at the moment. Only the economy matters," he says. "Currently, all we have is chaos. It has to end." He says that Egypt will only begin to recuperate economically once the tourists return.

As Abdelghalil speaks, fighter jets fly low over the Cairo city center. It is both a display of power and a moment of symbolism: The air show, complete with stripes of smoke in the national colors of white, red and black, marked the exact moment when Adly Mansour, chief justice of the country's highest court, was sworn in as the country's interim president.

Following his swearing-in, Mansour told assembled journalists that the Muslim Brotherhood is also a part of the country and they are welcome to help fashion the path to the future. It is the first in what promises to become a long list of differences of opinion between him and the military. In the afternoon, Egyptian prosecutors began investigations against Morsi and 15 other Islamists. They stand accused of having insulted the Egyptian judiciary.