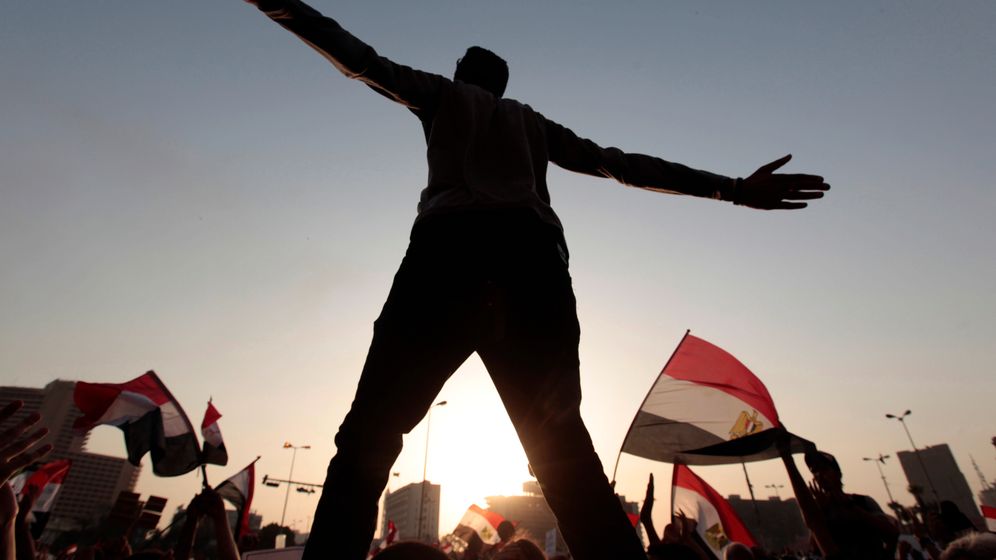 A search for the soul of the Egyptian people could begin in the narrow and dusty streets of Shubra al-Khaima, a northern suburb of Cairo. Donkey carts clatter across the potholes while scrap metal dealers and vegetable sellers jostle for space. Children play in front of houses next to old men sitting in plastic chairs.

They can be found here, in the midst of North Africa's largest metropolitan area, in a labyrinth of sandstone, clay and red bricks, people like coffee roasters Antar and Amgad Farid, two ordinary Egyptians -- just two of the nearly 51 million people who will be called upon to elect a new president on June 16 and 17.

It will be the first democratic election of an Egyptian head of state, made possible by a revolution that inspired the world and overthrew the autocratic, cancer-stricken former President Hosni Mubarak, who was sentenced to life in prison on June 2.

Brothers Antar and Amgad used to be looking forward to taking part in a unique experiment. Proud Egypt, the most populous Arab country, was to become a democracy after decades of authoritarian rule.

But now the Farids -- two amiable, slightly overweight gentlemen with moustaches -- are standing in their tiny shop feeling frustrated. It is hot and dry, and the tired-looking ceiling fan barely makes a difference, as flies buzz around the roasting machines. Like millions of other Egyptians, they feel cheated by their revolution.

A General and an Engineer

They were appalled to witness two hardliners turn out to be the frontrunners in the first round of elections on May 23 and 24: Ahmed Shafiq, 70, a former air-force general and member of the former Mubarak regime; and Mohammed Mursi, a 60-year-old engineer and senior official from the conservative core of the Islamist Muslim Brotherhood. The Farids, like most people in their neighborhood, had voted for the left-wing candidate Hamdeen Sabahi.

"We now have a choice between someone who hates the revolution and someone who wants to introduce Sharia," says Amgad. "God have mercy upon us."

The two brothers will probably vote for former military man Shafiq in this weekend's runoff election. He is the lesser of two evils, says Antar, who has a small crucifix tattooed on his right arm. The Farids are Copts, members of Egypt's largest Christian minority. The Islamists' long-term plans are dangerous, says Amgad.

About a third of the people in Shubra al-Khaima are Christians, while an estimated 5 million to 8 million Christians, or up to 10 percent of the population, live in Egypt as a whole. The exact number is a matter of debate.

What is clear, however, is that the majority of Copts share the sentiments of the Farid brothers. Christians in Egypt have a deep-seated fear of religious intolerance. Although many Christians are more likely to be poor and socially disadvantaged, this has not led them into the arms of the Muslim Brotherhood, allegedly the country's most charitable movement. The Islamists' social network is restricted to fellow Muslims.

Cut to Cairo's chic Garden City Club, an exclusive refuge where ice cubes tinkle in the whiskey glasses of the city's business elite, who are here to escape the noise and heat high above the roofs of the megacity. The guests, none of them members of the Muslim Brotherhood, are discussing the runoff election. Their views on Shafiq, the man Mubarak only recently praised as a "role model," also diverge widely.

"We need a president who is less polarizing," says one guest. "Shafiq is a military man. If he wins, the first thing he'll do is dissolve the parliament, which is dominated by the Muslim Brotherhood. That would be fatal."

Christians and liberals aren't the only ones who are apprehensive about having a president from the ranks of the Brotherhood. Many economic leaders, members of the military and the old security apparatus, as well as those Egyptians who yearn for "stable conditions," prefer Shafiq.

The retired general, a close associate of both Mubarak and former President Anwar Sadat, has vowed to reestablish a "strong state" and put an end to the "chaos." His attempts to connect with the supporters of the protest movement and "give them back the revolution" have seemed feeble by comparison. In fact, Shafiq's insincerity was reflected in his spokesman's comment, on the evening of the election, that "the revolution is over."

As the last prime minister installed by Mubarak, Shafiq himself is held responsible for much of the bloody violence on Tahrir Square. He also still faces corruption allegations from his days as minister of civil aviation. Cooperation with "that criminal Shafiq," says a young revolutionary, is "completely out of the question."

'Egypt Has Many Problems'

His opponents argue that Shafiq should not have been allowed to run in the first place. Under a law passed by the new parliament, senior members of the former regime are to be excluded from the election, and yet the election commission approved the general's candidacy -- evidence for many Egyptians of how much control the ruling military council still wields.

Shafiq's ties to the military and the old judicial system cast a shadow over the candidate. Even after the historic trial of former President Mubarak, he left no doubt as to his loyalty to the old regime. The trial ended with the acquittal of Mubarak's sons Gamal and Alaa, prompting thousands to take to the streets in anger and frustration. Meanwhile, Shafiq called upon Egyptians to accept the court's ruling.

Ibrahim Saleh, an 83-year-old businessman and Swiss citizen, is an old friend and supporter of Mursi's. He lives in a villa in the southeastern part of Cairo.

Saleh, as the unofficial number-three man and one of the forward thinkers of the Muslim Brotherhood, is much in demand these days in both the Islamic world and Europe. He studied engineering in Germany in the 1950s and, like many Egyptians, is a great admirer of German technology. Saleh says that it "isn't logical" that the West still has reservations about his movement. "Egypt has many problems, and we will tackle them," he says.

Saleh wants to solve Egypt's most pressing problems with an "Islamic economic model" based on large-scale government projects and an "interest-free capitalism." He envisions both an "agricultural revival of the entire Mediterranean coast, as in the days of the Romans" and the introduction of a common currency for the Islamic world.

His movement is down-to-earth, pragmatic and pro-business, says Saleh, who insists that these traits also apply to his friend Mursi.

But why then did the candidate capture only 24.8 percent of votes in the first round, while his party received almost 40 percent in the parliamentary election that ended in January? Was it because of Mursi's lack of charisma and the perception of him as the Brotherhood's "second choice," after the election commission had disqualified the businessman and multimillionaire Khairat el-Shater?

Or was it because of the Islamists' questionable initial behavior in parliament, which contributed to the demystification of the movement, and included bizarre theological debates and the refusal of some members to converse with women? In later TV appearances, Mursi tried to placate the Brotherhood's critics and make overtures to Copts and liberals. But then a newspaper quoted him as saying that the introduction of Sharia was a "matter of course."

Many Egyptians are alarmed by the prospect of a complete takeover by the Brotherhood, already the most powerful force in parliament.

Because of these concerns, it seems increasingly likely that many will boycott the runoff election. "Turnout will fall to less than 15 percent," says one expert. If that were the case, the new president would clearly lack meaningful legitimacy.

Whoever succeeds Mubarak, the Egyptians long for a new strong man, especially given the near-impossible challenges he will face. Egypt's population has exploded from 46 million in 1981, when Mubarak came into office, to 83 million today, and it is expected to increase to more than 120 million by around 2050. With deserts making up more than 80 percent of its landmass, the country must import millions of tons of wheat and other food products. Many Egyptians are already dependent on food vouchers.

For years, demographers have been warning of sharp declines, dramatic poverty and hunger riots. The Egyptian economy is in pieces, factories are being shut down and foreign investors are shunning the country. Unemployment figures are pure speculation, but even in pre-revolutionary Egypt some 40 percent of the population lived below the poverty line. Hospitals, schools, roads and bridges are in terrible shape.

Social hardships and popular disappointment with the Islamists also explain the surprisingly successful performance of secular leftist candidate Hamdeen Sabahi in this election. Although he did not qualify for the runoff, Sabahi captured an astonishing 20.8 percent of votes in the first round.

Instead of touting Islam as the solution of all problems, Sabahi won over voters disillusioned with the Muslim Brotherhood by focusing on "social justice."

Sabahi himself believes that his performance could be the first sign of the advent of a "third approach" that will continue to play an important role in the future: a broad popular movement beyond Islamism and modern Pharaonism.

If he's right, this Sunday will not mark the end of the election in Egypt, the Arab world's biggest democratic experiment to date. In fact, it will just be getting underway.