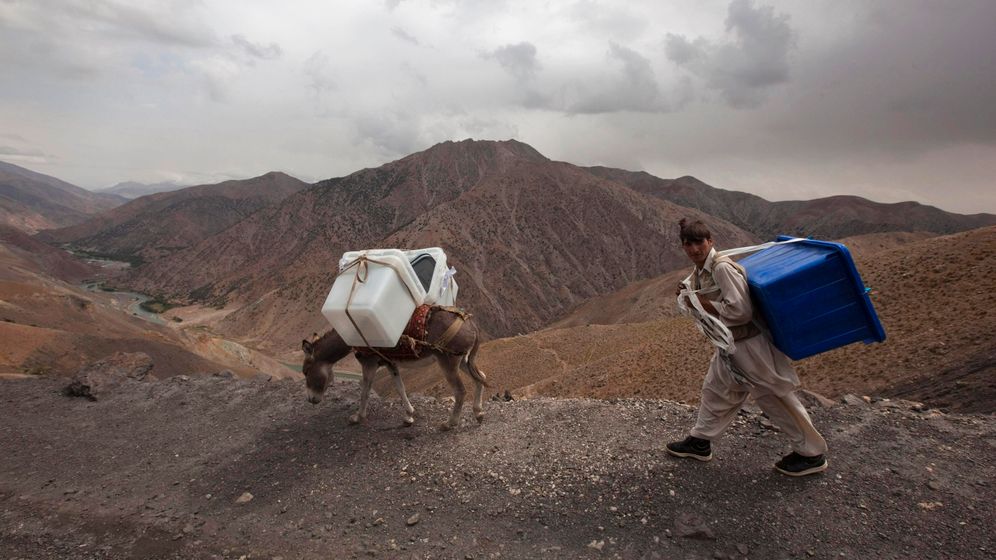 The government in Afghanistan has insisted Saturday's parliamentary elections will be free and fair. The international community has tried to be upbeat and optimistic. But Afghans themselves aren't buying it. With just a day to go before voters in the war-torn country go to the polls for just the second parliamentary elections in Afghanistan history, only 36 percent of the population believes that the vote will be transparent and fair. Nevertheless, fully 70 percent of voters plan to cast their ballots to elect the 249-member body.

The striking numbers reflecting Afghan attitudes to democracy come from a survey conducted in Afghanistan by the Konrad Adenauer Stiftung, a German political think tank, and published on Friday. The study was carried out in conjunction with the University of Kabul and involved interviews with 5,000 people in five different provinces.

In addition to revealing deep doubts about the fairness of Saturday's elections, the survey also makes it clear just how little faith the Afghan population has in the government of President Hamid Karzai -- himself re-elected to office in heavily manipulated elections last November.

Fully 65 percent of those surveyed responded negatively when asked if they were satisfied with the job Karzai is doing. The parliament scored even lower, with just 30 percent saying they were pleased with the body's work. The approval ratings for Karzai stand in contrast to the 50 percent of votes he claims to have received in the November election. The capital city of Kabul is particularly skeptical of the president -- fully 91 percent of those surveyed are dissatisfied with Karzai's performance.

The disgust with Karzai's leadership was likely not helped by the recent almost-collapse of the Kabul Bank, which relatives and friends of Karzai had been shamelessly treating as their very own private ATM. The president has also distinguished himself by blocking corruption investigations into his ministers and allies in government -- despite all promises to the contrary made to Western leaders.

But the survey is a clear setback, and not just for Kabul. The numbers presented in the study show the immense frustration that has built in Afghanistan in the nine years since the war began. In 2010, as NATO powers increasingly talk about withdrawal, realities on the ground are not pretty. Even as the international community continues to insist that Saturday's vote is yet another milestone on the road to democracy, Friday's study shows just how little faith Afghans themselves have in the country's democratic future.

The study also provided glimpses of national attitudes to other pressing questions. Seventy-four percent of respondents say that negotiations with the Taliban should be initiated. In some eastern provinces, where the war against the Islamists is especially intense, up to 90 percent are in favor of talks. But even in Kabul, over 60 percent support the idea. Nationwide, 61 percent believe that the Taliban should be part of the country's future power structures.

When it comes to the performance of the International Security Assistance Force (ISAF), Afghans are unimpressed, with every second respondent saying they do not see ISAF as a guarantee for security in Afghanistan. It is a poor result given the new strategy followed in recent months by the US-led force in the country -- a strategy that emphasized the security of Afghanistan's population, particularly those living in cities.

Threats from the Taliban

But it seems not to have been effective. The security situation in the country is the greatest concern facing ISAF on the eve of elections. Three candidates have already been murdered, and several election helpers have been killed in a number of attacks. One-quarter of the originally planned voting locations will not be opened at all on Saturday because of security fears. The Taliban has issued several threats to those planning to cast their ballots.

Indeed, Western intelligence agencies are convinced that the Taliban will try to use the election to attract attention to themselves -- by way of violent attacks. The threat has been taken seriously and has already influenced the elections. Even in the provinces surrounding the capital of Kabul, candidates have hardly been able to go out on the campaign trail, so concerned are they about being attacked on the open road or at campaign appearances. In the south and the east of Afghanistan, there hasn't been much of a campaign at all.

Still, Western troops are hoping to remain in the background on election day. The hope is that Saturday will be something of a coming out party for Afghanistan's slowly developing security forces. NATO units have spent recent days either arresting or killing groups planning to stage attacks on election day, but on Saturday NATO will be letting the Afghans do most of the work.

The stakes are high. Should chaos reign on election day, it will be a major setback for Western hopes of improvement in Afghanistan. But even as NATO hopes that Afghanistan security forces will take the lead, the Western alliance is prepared to act if necessary.

"These elections will be Afghan-led and run with Afghan National Security Forces responsible for providing site security and freedom of movement," General David Petraeus, commander of all Western forces in Afghanistan, told SPIEGEL ONLINE. "But ISAF will play a supporting role and will assist and partner with the ANSF ... to contribute to the provision of security for the people so that they literally can cast a vote."

Aside from security fears, concerns over falsified ballots are also making the rounds. Thousands of falsified voter registration cards have already turned up and there have been reports in Pakistan that parliamentary candidates have traveled across the border to print fake registration cards. If one adds the new fakes to the sum of improperly issued IDs to non-existent voters in the last election, the sum of potentially irregular votes could be as high as 3 million -- one-sixth of the Afghan electorate.

Optimists, of course, insist that the fake registration cards have little purpose given that voters receive a permanent ink stain on their fingers after casting their ballot. Casting multiple votes is thus rendered impossible. Recent experience, however, has shown that this method has not been effective. Indeed, the widespread doubts the Afghans have about the possibility of a free and fair vote in their country appear to be more than justified.