They greet him as if he were a savior. When Mikhail Saakashvili, the president of Georgia, steps out of his helicopter, the crowd is ecstatic.

Some have been waiting here for hours, on the edge of the gardens of the Tsqaltubo spa resort, just to see him. They stand in the scorching heat, young people wearing the colors of the governing party and old widows dressed in black. The air is filled with the smell of sweat and mothballs. The president works his way through the crowd, shaking the hands of his admirers. He is wearing baggy jeans and a casual shirt.

At close range, he blends in well with the people. They call him "Misha."

Even though he has been campaigning throughout the country on a daily basis, it is not Saakashvili himself but his party, the United National Movement, that faces an election on Oct. 1, when Georgians will elect a new parliament.

But since the small country in the Caucasus is run like a family business, it's important for Misha to make a personal appearance, if he can, whenever there is something to celebrate or announce. On this particular afternoon, he promises the crowd at the spa a "world class resort." A little later, in the western city of Kutaisi, he tells his audience how important it is for Georgia's 4 million inhabitants to stick together, and that even in an election year, "each of us is a Georgian patriot first, and only then a Christian Democrat or a Social Democrat, a nationalist or a dreamer."

In saying "dreamer," the president is using the derisive nickname he has given the upstarts from a six-party coalition called "Georgian Dream" that is challenging Saakashvili and his party. The leader of the "dreamers" is a man named Bidzina Ivanishvili. He is shorter and thinner than Saakashvili, but his net worth is $6.4 billion (€5 billion), according to Forbes, or more than Georgia's entire national budget.

A year ago, the businessman decided to get into politics. Since then, Saakashvili has had to direct his gaze upwards at a new rival. Seen from the president's mansion, Ivanishvili's flashy glass palace, perched high above Tbilisi, overlooks everything in view.

The bonanza from Ivanishvili's coffers has given hope to the opposition and is enticing voters. This makes the governing party nervous, even though it's still ahead in the polls. A victory in this parliamentary election will be doubly important because a constitutional amendment that strengthens the position of the prime minister while reducing the powers of the president will go into effect in October 2013, at the end of Saakashvili's second and final term. Despite all the assurances that he doesn't, if Saakashvili wants to transition to becoming the prime minister -- just like Vladimir Putin did in Russia in 2008 -- he will need a majority in parliament.

Before a crowd of applauding supporters in the Tbilisi Sports Palace, Saakashvili accuses Ivanishvili, who made his fortune in Russia, of being Putin's straw man. Saakashvili claims that Moscow is spending "$2 billion" to "finance its own candidate." On the other hand, the fact that Saakashvili, who received a law degree in the United States and interned at a New York law firm, is derided as Washington's puppet shows how deep the divide between Russia and Georgia has grown since the two countries' five-day war in 2008. It also highlights how much is at stake here, given Georgia's role as a way station in the lucrative trade of oil and gas from the Caspian Sea.

As a result, the fight isn't just being waged on Georgian soil. Both camps are employing battalions of lobbyists, especially in Washington, but also in Berlin. In the German capital, former US Ambassador to Germany John Kornblum is lobbying for Ivanishvili, while Gabriela von Habsburg serves as the ambassador of Georgia, a country that has undergone radical change.

The World Bank has named Georgia a "top reformer." In its "Doing Business 2012" report, which ranks countries in terms of the ease of doing business, the Caucasus nation has climbed from 112th to 16th place since 2005. Lower-level and mid-level corruption is considered virtually eliminated. Is Georgia, a country notorious for its corrupt business practices, somehow managing to square the Caucasian vicious circle, overcoming a centuries-old history of corruption and strictly hierarchical leadership structures?

Nino Burjanadze, the former chairperson of the Georgian parliament and an erstwhile supporter of Saakashvili, says the exact opposite is true. She claims that there is "money laundering and corruption among the elites." But the thing she criticizes the most is that: "We have less democracy today than before the revolution." She even says that Saakashvili assumes dictatorial airs not unlike Belarusian President Alexander Lukashenko, "although in perfect English, when necessary."

Since 2007, there have been large-scale demonstrations against corruption at the top levels of government and alleged murder plots involving the Saakashvili regime. Last week, thousands took to the streets once again, this time to protest recently surfaced videos that show rapes and serious abuse of prisoners. Georgia's minister of corrections and interior minister have resigned over the incident.

Until 2009, Sozar Subari served as Georgia's ombudsman, which made him the highest-ranking human rights official in the country. It was already clear to him then, he says, that although the West was aware of what was happening, it was turning a blind eye to the dark side of Saakashvili and his associates. "Human rights violations are part of their principles," Subari says.

For now, Saakashvili himself is saying nothing. Ironically, a man who was once very open to meeting with journalists, even late at night, is now saying he won't give any interviews until election day. Saakashvili reportedly wants to avoid having to comment on speculations about whether he intends to switch to the premiership after the end of his term.

On the Brink of Dictatorship?

Still, Saakashvili does speak to voters several times a day -- particularly about Russia. Georgia's loss of the five-day war in August 2008 deeply traumatized its people. At the time, Russian tanks had advanced to within only 50 kilometers (31 miles) of Tbilisi, after Georgia had bombarded the renegade province of South Ossetia. More than 400 people died on the Georgian side. The regions of South Ossetia and Abkhazia are now formally independent, but de facto under Russian control.

Georgia lost 18 percent of its territory in the wake of the war. Even more devastating for Saakashvili is the fact that his claim that the Russians started the war by attacking Georgia is now considered refuted. In response to the question of whether Georgia's use of violence in South Ossetia was justified under international law, the European Union's 2009 final report on the war concluded: "It was not."

Almost all of Saakashvili's American advisers from that period have left Georgia. The era of former US President George W. Bush has ended, and a new chapter has begun in relations between Moscow and Washington. The question of whether Georgia should be admitted into NATO is not among President Barack Obama's top concerns. Nevertheless, the new Georgian national security doctrine continues to mention the risk of another "military attack" and of "terrorist activities being organized by Russia from the occupied territories." Moscow's goal, according to the document, is to bring Georgia back "into Russia's orbit by force."

As the New Yorker wrote in late 2008, the enmity between Saakashvili and Putin is essentially a rivalry between a big man from a small country and a small man from a big country. The small man allegedly told French President Nicolas Sarkozy that he wanted to see the big man, Saakashvili, hung up "by the balls." "He would not have enough rope," the big man reportedly responded.

Saakashvili "was and remains a clever fellow," says Georgian statesman Eduard Shevardnadze. The former foreign minister of the Soviet Union, now 84, is seriously ill and lives in Tbilisi. Although he was once Saakashvili's mentor, he now says: "When it comes to politics, he has become a dilettante." Shevardnadze believes that Saakashvili is leading Georgia to the brink of dictatorship.

Nevertheless, the president prefers to rely on the judgment of younger people. Raphaël Glucksmann, the 32-year-old son of French philosopher André Glucksmann, as well as the husband of the new Georgian interior minister and an adviser to Saakashvili, is part of the guard of young political operatives who explain in several languages to visitors in Tbilisi what is remarkable about Misha. For example, they say that he is "impulsive by design" but by no means megalomaniacal, that he was misquoted in interviews in which he allegedly likened himself to former Turkish statesman Mustafa Kemal Atatürk and former French President Charles de Gaulle, and that it is important to not allow an incorrect image of Saakashvili to develop in the West. "That's because," Glucksmann says, "neither the Georgian police nor the army will protect us from Russia's interest in instability in this country. Only Europe's participation can protect us."

Perhaps humility and a more realistic approach would also be beneficial. Traveling eastward by car after one of Saakashvili's campaign appearances in western Georgia, one reaches a sensitive spot shortly before Tbilisi. There, on the other side of the left-hand guardrail, Georgian territory ends and South Ossetia, the separatist republic under Russian control, begins.

This is, of course, nothing more than a tiny fracture in the structure of the power blocs south of the Caucasus range, a small scar in vulnerable tissue.

But the wound could reopen at any time. 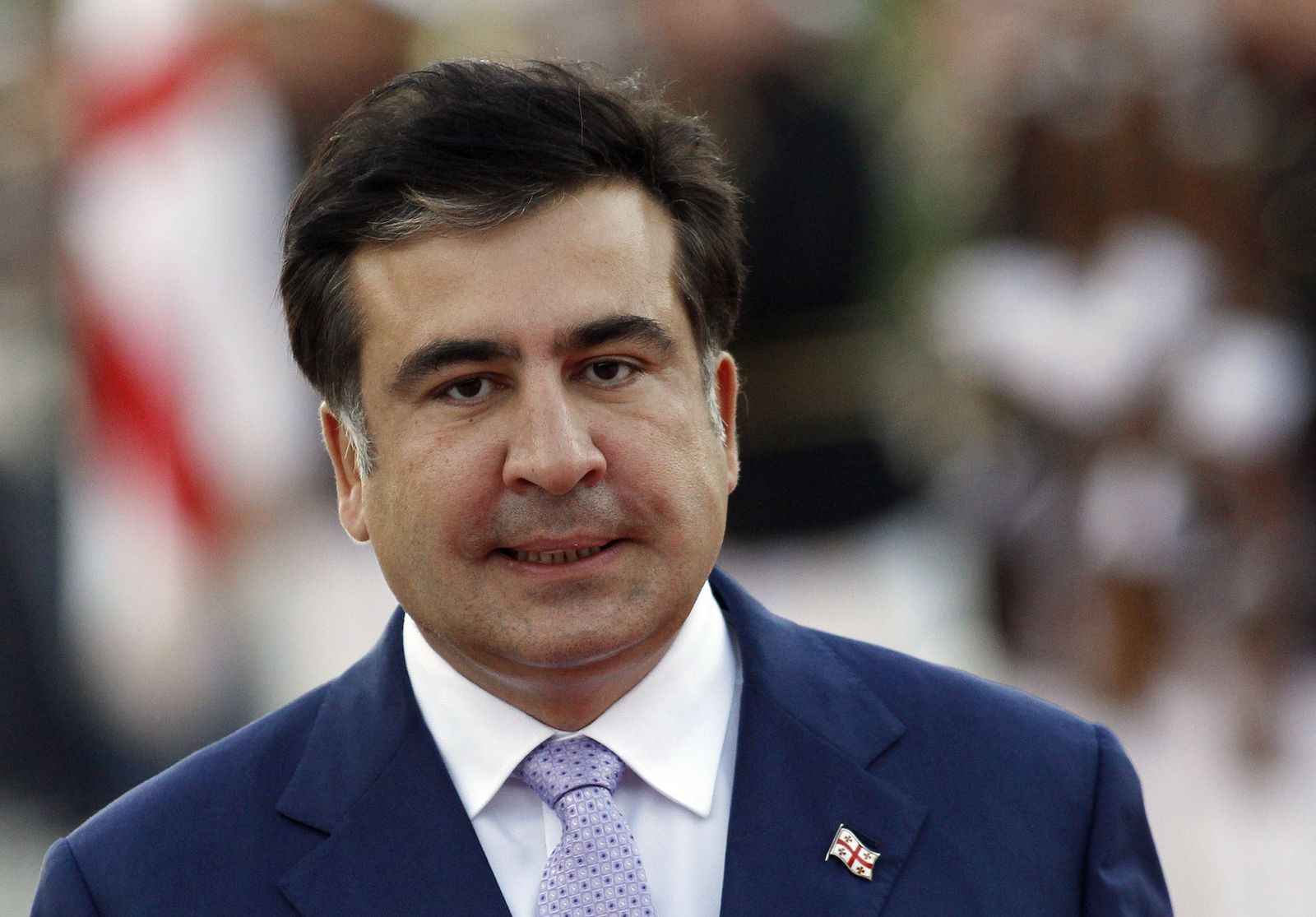