It had been a long time since Kabul had seen such an exclusive circle of guests. On Tuesday of last week, many of the men whose troops liberated the Afghan capital from the Taliban 10 years ago arrived in the city's upscale neighborhood of Wazir Akbar Khan.

Vice President Marshal Mohammed Fahim was there, along with Energy Minister Ismail Khan, former presidential candidate Abdullah Abdullah and Atta Mohammed Noor, governor of Balkh province. These are the former leaders of the legendary Northern Alliance, which formed the core of resistance against the Taliban in the 1990s. Fahim served as the Alliance's head of intelligence services. Militia leader Khan was known as the "Lion of Herat" after his native province. Atta was a powerful commander in the north, and Abdullah was the Alliance's foreign minister.

Now they stood on Kabul's Street No. 10 with their backs to the Czech Embassy, gazing at a two-story villa belonging to Burhanuddin Rabbani, 71. A professor of theology who served as Afghanistan's president for nine years, as well as the Northern Alliance's spiritual leader, Rabbani had been murdered two hours earlier in his own house by a suicide attacker, presumably someone from within the Taliban's circles.

A black cloth hung on a wall and an imam recited verses from the Koran. Spiritual leaders and tribal heads, governmental officials and members of Rabbani's Jamiat-e-Islami political party crowded into the lane, and their conversations weren't particularly heartening.

They spoke of "Afghanistan's brutal enemies," of the "chaos" into which the country would now descend and of the pointlessness of peace talks with the Taliban. "How are we supposed to negotiate with these wild devils?" Atta said angrily. The Taliban, he said, was gradually killing off all of the former Northern Alliance leaders.

Perhaps there was a bit of criticism for the recently deceased mixed in with the mourning. Rabbani was head of Afghanistan's High Peace Council, a 70-member body convened almost a year ago by President Hamid Karzai to pursue talks with the Taliban independently of the government.

At that point, choosing Rabbani seemed like a clever move on Karzai's part. Rabbani was an ethnic Tajik, like most of the Northern Alliance. He wasn't a military commander like Khan or Atta, however, but a theologian, having studied Islamic law in Kabul. He lived in Pakistan during the Soviet occupation of Afghanistan, where he procured weapons and funds for the mujahedeen and became one of the ideological leaders of the resistance. After the Communist regime collapsed, he became president of the Islamic State of Afghanistan, officially remaining head of state even as he fled from the Taliban to the northeastern province of Badakhshan. He turned the position over to Karzai in 2001.

Both the US and Europe have increased their efforts to seek out contact with the Taliban, but see little point in holding talks without Afghan involvement. Rabbani, the Tajik leader, was well connected throughout Afghanistan's many provinces.

But was the hope that Karzai and the West placed in Rabbani and the High Peace Council ever a realistic one? The Taliban took Rabbani's appointment as an insult, as they detested him -- a fact that Karzai knew very well. The message the Taliban took away was that the peace council was a sham rather than a true attempt at reconciliation.

The fact that neither prominent former Taliban leaders nor members of the former royal family were represented in the newly appointed council, not even the influential brothers of Ahmad Shah Massoud, the Northern Alliance military commander killed 10 years ago, lent further credence to that interpretation. By the time of his death, Rabbani had managed to persuade around 2,000 Taliban to give up their fight, most of them low-level members of little significance.

But at the same time, Rabbani used his travels around the country to try to build up new networks strengthening the position of the old Northern Alliance, with an eye to the period after the West withdraws from the country. Afghanistan's Tajiks feel they are being sidelined by Karzai, a Pashtun. The president "pushed aside" the national leaders who had fought successfully against the Soviets and the Taliban in favor of a government team made up of outsiders, Rabbani said in a May 2007 interview with SPIEGEL -- conducted in the very house where he was later murdered.

The Taliban has long since recognized that the Tajiks, who are heavily represented in Afghanistan's new army, could once again become a threat to them. In the past months, they have eliminated the leaders of these former and future enemies one after another, including three influential police chiefs. The victims were Tajiks and former Northern Alliance commanders.

The attacks show where the frontlines will be drawn as soon as NATO wraps up its operations in Afghanistan. Haroun Mir, a policy expert in Kabul, says Rabbani's death will widen Afghanistan's "ethnic and geographic divide" between the Tajiks in the north and the Pashtuns in the south, the home territory of the Taliban.

'We Will Take Revenge'

What is the point, then, of these talks between the US and the Taliban, which have even twice involved German negotiators? The Taliban is not prepared to make any serious concessions, the new American ambassador in Kabul recently admitted.

The US has also shown that many of the attacks appear to have been carried out with help from the Pakistani intelligence service ISI, which supports the Taliban. The ISI has done everything they can to make sure the peace talks don't succeed.

The ethnic Tajiks who gathered in front of their murdered leader's villa last week were serious about their intentions, however. "Our enemies must know, with the strength of our mujahideen and soldiers of our martyred leader, we will take revenge," Governor Atta promised. Amrullah Saleh, who served temporarily as head of intelligence services under Karzai, announced: "It is time for us to unite for change and for defeat of the Taliban."

In Afghanistan, which has been the site of fighting for over 30 years, true peace doesn't seem to be in sight. 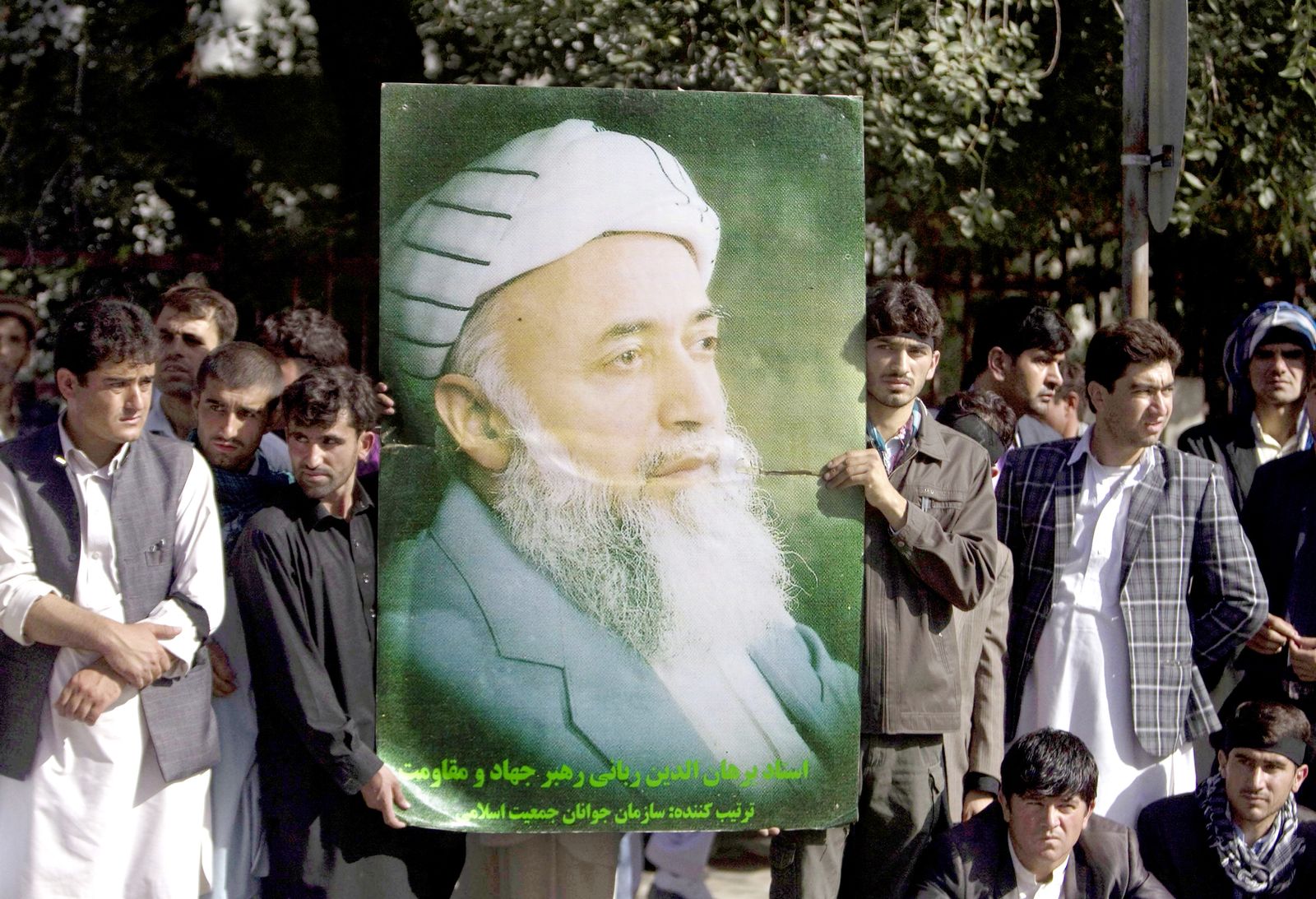 Supporters of Burhanuddin Rabbani hold a picture of him as they stand outside his house a day after he was killed in Kabul (Sept. 21 photo).