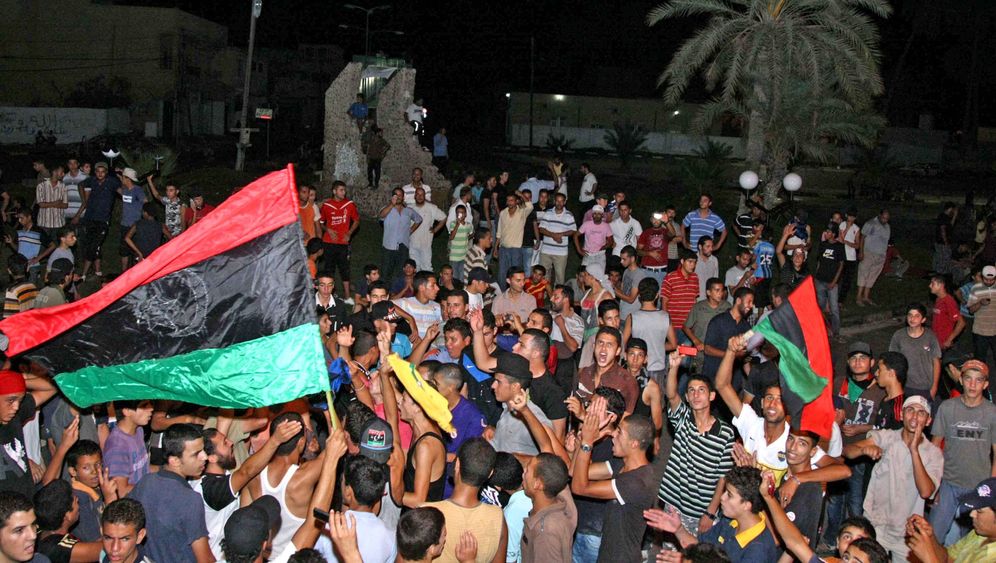 The struggle for control of Libya has entered a decisive new phase. Rebels have taken control of much of the capital Tripoli, and the end of dictator Moammar Gadhafi's regime appears to be in sight after months of fighting.

On Monday morning, Tripoli appeared to be largely in the hands of the regime's opponents. There were reports that many loyalist soldiers had been captured. The rebels also said that Gadhafi's elite presidential guard had surrendered. A rebel spokesman told the television station Al-Jazeera that some of Gadhafi's troops were continuing to fight and still had 15 to 20 percent of the urban area under their control.

The rebels announced they had captured two of Gadhafi's sons, including Saif al-Islam Gadhafi. Moammar Gadhafi's whereabouts were unknown, however. A representative of the transitional council said he did not believe that Gadhafi was even in Tripoli.

Gadhafi's leadership compound, Bab al-Aziziya, was apparently still under loyalist control. There were reports of heavy fighting around the compound.

The rebels met with little resistance as they swept into the city on Sunday from various directions. They managed to take control of the symbolic Green Square in the heart of Tripoli. According to Al-Jazeera, the rebels announced they wanted to give the square its original name of Martyrs' Square back.

Al-Jazeera showed images of cheering people greeting the rebels on the streets of Tripoli, dancing and firing celebratory shots. Many chanted "Allah is great," and "Tripoli will be free." People fired shots at a giant poster showing a picture of Gadhafi and tore down the flags of the Libyan government.

In the rebel stronghold of Benghazi, a huge crowd gathered to celebrate. People set off fireworks and fired salutes in Benghazi and other cities.

Gadhafi showed defiance in a series of audio messages on Sunday evening. He called on his supporters to take to the streets to fight the "rats and traitors." He said that all tribes must "march on Tripoli" to protect the city, otherwise they would become "slaves of the imperialists." It was unclear where the message had been recorded.

According to the New York Times, the rebel's governing body, the National Transitional Council, issued a statement saying: "We congratulate the Libyan people for the fall of Moammar Gadhafi and call on the Libyan people to go into the street to protect the public property. Long live free Libya."

German Defense Minister Thomas de Maizière said he would not rule out a German military operation in Libya to help stabilize the country after the possible end of the Gadhafi regime. "If there are requests to the Bundeswehr, we will examine them constructively," he told the regional German newspaper Rheinische Post. Any German operation would, however, be contingent on Libya being able to maintain a stable state by itself "in a post-Gadhafi period," de Maizière added.

Meanwhile on Monday Foreign Minister Guido Westerwelle also offered German aid for reconstruction in Libya, calling on the rebels to facilitate democracy in the country. "We clearly insist on a democratic transition," he said. Westerwelle said Moammar Gadhafi must face trial for the crimes of his "brutal reign" and for waging war on his own people. "The dictator's time has passed," he said.

Germany was the subject of heavy criticism in March when it abstained from the UN Security Council vote authorizing the use of force against Gadhafi's regime. Germany is not directly involved in the NATO operation to protect Libya's civilian population. It was revealed last week, however, that German soldiers currently stationed at NATO facilities in Italy are performing duties involving target selection for NATO airstrikes.

US President Barack Obama welcomed the rebels' advance. "Tonight, the momentum against the Gaddafi regime has reached a tipping point," Obama said in a statement. "Tripoli is slipping from the grasp of a tyrant."

The European Union also urged Gadhafi to give up power. "We seem to be witnessing the last moments of the Gadhafi regime and we call on Gadhafi to step down without further delay and avoid further bloodshed," Michael Mann, a spokesman for EU foreign affairs chief Catherine Ashton, told the news agency Reuters on Monday. Mann added that the EU was already planning for the post-Gadhafi era. "We do have a number of scenarios that we have worked (out) in terms of our assistance post-Gadhafi," he said.

In June, the International Criminal Court (ICC) in The Hague issued warrants for the arrest of Moammar Gadhafi, his son and anointed successor, Saif al-Islam Gadhafi, and Abdullah al-Sanoussi, the head of Libyan intelligence. In the early hours of Monday, the ICC confirmed that Saif al-Islam Gadhafi had been detained. The ICC's chief prosecutor, Luis Moreno-Ocampo, called on the rebels to extradite Saif al-Islam to The Hague. He told Reuters he would contact the Transitional National Council on Monday to discuss the next steps.