The Israeli Army increased its offensive in the south of the Gaza Strip during the night. Fighter jets bombed Rafah on the border with Egypt -- the target was the tunnels that are used to smuggle goods and weapons from Egypt into the Gaza Strip. Dozens of Israeli tanks were spotted at the Kissufim crossing heading in the direction of Khan Younis, a stronghold of the ruling Islamist group Hamas. Eye witnesses also reported seeing air strikes in the north of the strip. Meanwhile on Thursday morning, several rockets fired from Lebanon struck northern Israel.

Nevertheless at the same time there seems to be movement on the diplomatic front. Israel and the Palestinians are sending representatives to Cairo on Thursday for talks on a truce. The Egyptian ambassador to the United Nations Maged Abdelaziz said that Israel, the Palestinian Authority of President Mahmud Abbas, whose Fatah movement controls the West Bank, and Hamas were all invited. Each delegation will meet separately with Egyptian government officials but will not hold talks with each other. The Franco-Egyptian cease-fire initiative will be discussed in the negotiations. Israel is to send Amos Gilad, a political advisor to Defense Minister Ehud Barak.

The Cairo talks are a big success for Egyptian President Hosni Mubarak, who had been accused of failing to act in the Middle East. "The great Egyptian Presidents Gamal Abdel Nasser and Anwar al-Sadat changed the Middle East, if not the world," trumpeted a Beirut-based TV network on Wednesday. "And what has Hosni Murbarak done for the Arabs?" Yet it is this much mocked president who seems now to have succeeded in pushing forward international efforts to reach a cease-fire -- in cooperation with his French counterpart Nicolas Sarkozy.

Few details of the joint plan are known, even fewer have been officially released -- but behind the scenes the pieces of the puzzle are slowly falling into place. The diplomatic deal's core component seems to be an observer mission that will be made up of Arab and European states. The truce has to be agreed upon first, after which the details will follow.

According to information obtained by SPIEGEL ONLINE, those details are now being worked out: Tunisia has been asked to take part in the mission, Jordan is still being considered, the Saudis have refused, the Egyptians themselves are unwilling but will probably not rule it out completely. The word from Ankara is that Turkey could also be involved -- perhaps even leading the mission. There have also been positive political signals from Europe: Denmark and the Netherlands have both suggested an international mission on the Gaza-Egypt border.

It is not year clear what the mandate, equipment and rules of engagement of the suggested international mission will be, but it would have two primary tasks: to make sure that Hamas does not fire any more rockets into Israeli territory; and to cut off supplies to the Islamist organization. Egypt would, however, like to see the mission made up of soldiers and not just observers.

The Franco-Egyptian proposal will take into account what have emerged as Israel's three essential conditions:

Despite these conditions, Hamas has already "shown a green light," a Palestinian spokesman told SPIEGEL ONLINE in Cairo on Wednesday. Even though the price is high. "What the hell," said another high-ranking Hamas official. "We all need Egypt."

Israel is equally well disposed toward the Franco-Egyptian initiative. "That would be the best way out of the new dilemma for our government," an Israeli diplomat said of the proposed solution. The government is making the right signals. Although the army resumed its bombing after the end of the three-hour "humanitarian cease-fire" the security cabinet postponed the approved expansion of the Gaza offensive.

Of course, there are still decisive questions that need to be addressed. Israel has insisted that it will not sit at the negotiating table with Hamas. Nevertheless, a Hamas delegation traveled to Cairo on Wednesday -- evidently with the aim of exploring its room for maneuver. This is being perceived as an acceptance of reality and so far has not been made an issue by any of those involved. On Wednesday evening, Egyptian UN Ambassador Maged Abdelaziz confirmed in New York that all the sides would be sending a "technical delegation" to a meeting in Cairo on Thursday. The focus of the talks will be the Franco-Egyptian plan for a cease-fire.

A second important issue is the future situation along the border between the Gaza Strip and Egypt. If Hamas is to survive politically it has to ensure, at the very least, that supplies reach the Gaza Strip. If Gaza were able to ensure that goods and people could travel via Egypt, then Jerusalem would no longer be able to apply pressure on Hamas by closing border crossings. 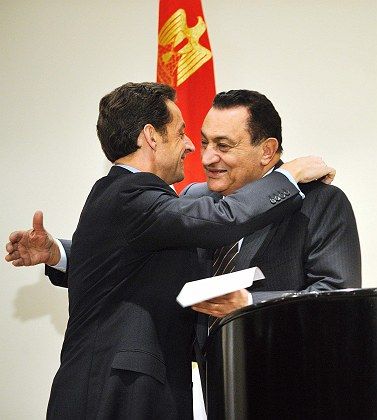 Hamas would be able to sell that as a partial victory -- but this would not necessarily be a problem for the Israeli government. This would simply mean that Egypt will have to shoulder more of the burden in the future. Israel has made no bones about the fact that it would like "to be free of Gaza," says Efraim Inbar, director of the Begin-Sadat Center for Strategic Studies in Jerusalem. "If in the future all transport, whether of persons or goods, were to go through Egypt, then that would be a great success for Israel."

It seems then as if Egypt, as quasi guarantor of the proposed deal, will be taking on a certain risk. Even if the international community is involved in overseeing the new cease-fire in the future, it will be Cairo that will bear the main responsibility for preventing Hamas from rearming.

"There is an expectation that in the future Egypt will act with more responsibility in making sure that the smuggling of weapons through tunnels under its border is prevented," says Inbar. Egypt is stuck in something of a dilemma. On no account did it want to be the one left holding the "Gaza hot potato," yet it couldn't admit that out of consideration for public opinion in the region, the "Arab street." In Egyptian government circles, however, there is a complete rejection of the idea that Cairo would ever take over the administration of the Gaza Strip.

Mubarak is in fact running two risks. Egypt's constructive role has dangers for its domestic political situation, something that is hardly realized in Israel. Egypt's actions throughout the Israeli-Palestinian conflict always seem like a journey up a mountainous mule track. Any slight vibration risks plunging it into the abyss. Critics in the Arab camp who expect Cairo to use political and possibly military blows in order to get rid of all the problems between Arabs and Israelis pose a danger to moderate politics.

At the moment the feeling on the streets of Cairo is largely one of understanding for Mubarak's policy. However, this is clouded by the conviction that Israel is also to blame for the escalation. In particular because it did not stick to the agreement to stop the activities of settlers in the occupied West Bank.

Mubarak had repeatedly called on Hamas to stop its rocket attacks in order to prevent a foreseeable attack by the Israeli army. Yet even this call for reason was attacked as a "stab in the back against Arab nationalists and against Islam."

"We will never again sit at a table with Egyptians," Ismail Haniyeh, the Hamas ruler in the Gaza Strip, declared at the time. Now the situation looks somewhat different. Hamas even seems ready to make a further, more difficult concession: The initiative being discussed in Cairo envisages a role for the Palestinian Authority in the Gaza Strip. The PA is dominated by Fatah, the sworn enemy of Hamas.

The plans would appear to include a role for institutions overseen by the Palestinian Authority and President Mahmud Abbas in controlling Gaza's borders -- possibly together with the European Union and soldiers from other countries. This is the same Fatah that Hamas forced out of the Gaza Strip in 2007. Abbas is involved in the current talks and plans to travel to Cairo on Saturday to iron out the final details. Hamas appears to have accepted this.

This is no guarantee of lasting peace but it presents a glimmer of hope.