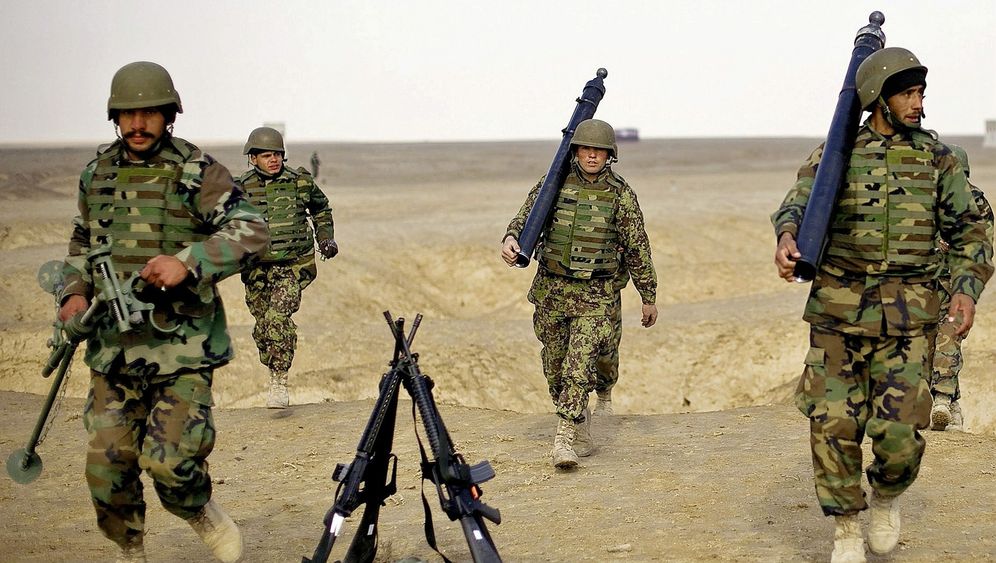 The Germans call the light-colored guardhouse in their camp the "White House." That's what Salim Mir calls it, too. Mir is a powerfully built 49-year-old sporting a black moustache and the green uniform of the Afghan army, with its wine-red velvet collar tab. Mir speaks of a "disgrace." He says the "enemy" infiltrated their ranks and that Islamists are using young Afghans for their own ends.

The "enemy" Mir refers to is Sayed Afzal, a 19-year-old sentry who served in the "White House" until two Fridays ago -- that is, until he opened fired on German soldiers at the German outpost OP North, killing three and wounding six, before being gunned down himself.

The snow-covered stonghold of the Bundeswehr, Germany's military, sits on a hill overlooking the Baghlan River. The river runs through what the Germans call the "Highway Triangle," which lies before Shahabuddin, a notorious hive of insurgents. Afghan and German soldiers have been living here side by side; they've fighting the same enemy. They live in the same camp, they share what they've learned on reconnaissance patrols, they hunt Taliban fighters, and they build police stations together. Mountain infantry soldiers from the Bavarian Alps flip through photo books with shots of their homeland, and the Afghan officers show them postcards with images of the Pamir Mountains.

The Germans have grown used to having to sit on the ground when they hold conversations and to the long-winded way their Muslim allies have of expressing thanks. The Afghans have learned to issue precisely worded orders and to show up for missions on time. For the most part.

For five months, everything went fine, even with Afzal, the young Pashtun from Khost Province, which borders Pakistan to the east. Afzal stood guard at the camp's entrance. With a smile and a wave, he used to open the outpost's gate when the Germans returned from missions in their armored personnel carriers.

From Smiles to Bullets

All of this changed at 11:50 a.m. on February 18. After a rotation of the guard, Afzal went about 100 meters (328 feet) up the gravel road leading to the camp with a fully loaded AK-47 assault rifle in his hands. At a crossroads, a group of mechanized infantrymen from Regen, Bavaria, were gathered around an armored transport vehicle that had broken down.

Approaching from behind, Azfal raised his rifle and opened fire. He hit nine soldiers before being felled by a bullet himself.

Afzal's family hasn't lived in Afghanistan for a long time. They've lived instead in Kohat, a garrison town in the northwestern corner of Pakistan. Al-Qaida's leadership and many Taliban fighters have retreated to areas near Kohat, where terrorists now train. In recent decades hundreds of thousands of Afghan refugees have sought shelter in Pakistan. Though most are not radical, some nevertheless support the battle against the infidels, who they see as the occupiers of Afghanistan.

Afzal had been serving in the Afghan National Army (ANA) for nine months. His superiors say there was nothing particularly notable about him and that he never seemed particularly devout. They did point out, though, that he often went to see his family in Pakistan. Lieutenant Colonel Obaidullah Salim Mir, the leader of the Afghan unit, or kandak, that replaced Afzal's guard unit after the attack believes he was most likely influenced by extremists while on those visits back home.

In the wake of the attack, many wonder if Afzal was one of the men the Taliban had charged with infiltrating the Afghan army. Many also wonder whether it means the end of the concept known as "partnering," which has German soldiers patrolling with Afghan units to let them assume more and more control over operations before Western forces ultimately withdraw.

The fact that Taliban leaders have called on supporters to infiltrate the ranks of army and police trainees is nothing new. In July 2010, one of their "sleepers" killed three soldiers belonging to the Royal Gurkha Rifles, a regiment of the British Army. The man had previously trained with the ANA. And two weeks ago, insurgents wearing ANA uniforms attacked a bank in the eastern Afghan city of Jalalabad, where soldiers were collecting their pay.

War at the Crossroads

Nikolaus Carstens keeps precise track of all these kinds of events. The 42-year-old Hamburg native is the commanding officer at the OP North camp. He looks tired. Like any officer, he's been deeply affected by the death of soldiers under his command. But he still believes in partnering with the Afghans.

On the wall of his tent, Carstens has pinned up a map of the Highway Triangle. Below the triangle lies the city of Pul-i-Khumri. The road north -- dubbed "Pluto" by the soldiers -- runs through a valley and is the main way to reach Kunduz. Another road -- "Uranus" -- shoots off to the northwest at a 40-degree angle. This is the most important traffic route to Mazar-i-Sharif, the largest city in northern Afghanistan. The road leading south from where these roads intersect heads to Kabul.

Five months ago, Baghlan was still firmly under insurgent control. Trucks were ambushed and set afire here on a daily basis, roadside bombs were laid, and government opponents manned illegal checkpoints and forced travelers to pay tolls to use the roads.

Today, Baghlan is relatively peaceful, and it's even safe to travel along "Pluto" at night. "That's only because we worked with the Afghans," Carstens says. When they made plans to jointly attack the Taliban, the Afghans always had intelligence unavailable Western soldiers, such as who was collaborating with whom in Dande Ghori, a Taliban safe haven west of the Baghlan River. On 20 occasions Afghans have provided precise details on the locations of roadside bombs.

But who can you trust in wartime? Perhaps Commander Safi, the leader of another kandak of the Afghan army. Over the last five months, Safi has become one of Carstens' closest allies. Working together, Carstens says, the two have "liberated" Baghlan from the enemy. Now a 30-by-40-kilometer area (463 square miles) has become relatively peaceful (463 square miles) -- a relatively sizeable area for Afghanistan, says Carstens. Then came the bloody Friday.

Afzal, the assailant, wasn't under Commander Safi's direct control, but the attack on the Germans has raised plenty of questions. What motivated Afzal to attack, the Germans wonder, and how could something like this have happened in their own camp? Army chaplains and the psychologist have had their hands full.

Carstens says conversations with their Afghan comrades have been very blunt. "We can tolerate that maybe once," he told them. "But, if it happens a second time, it will be tough to deal with it rationally. Find the black sheep among your ranks."

The Afghan army is 150,000-soldiers strong, but NATO trainers say that only about 10 percent can read or write. Another problem involves drugs. The Afghan soldier who doesn't enjoy hashish -- or else a green, euphora-inducing chewing tobacco -- is more the exception than the rule.

Since soldiers' monthly salaries were raised to $165 (€120) last year, plus a $45 combat bonus, there are also -- finally -- more applicants for the Afghan Defense Ministry to choose from. For a recruit to be admitted, two village elders or other trusted persons have to vouch for them, both the Interior Ministry and the Defense Ministry look into their criminal records, and an obligatory drug test will be instituted. Despite all these safeguards, though, there are still risks.

Commander Carstens sits up late this evening in his command post, poring over a map. His area of operations is marked by a black line. Within it, 10 outposts are manned by fewer and fewer Germans and more and more Afghans. Next week Carstens will fly home to Germany, and another officer will assume his duties. But no one can say whether the progress Carstens and his soldiers have made will last through the summer.

With reporting by Enayat Najafizada