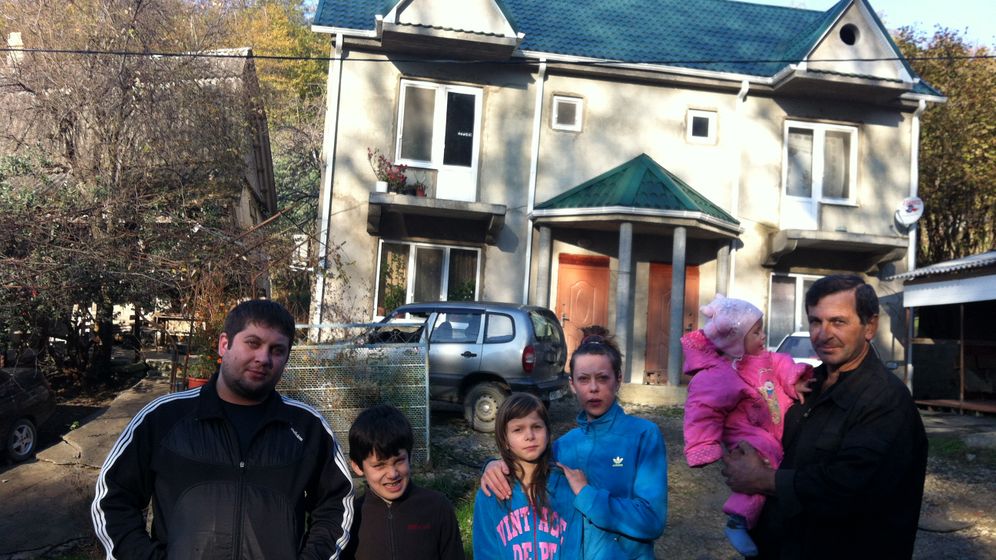 Photo Gallery: The Sins of Sochi

When Tigran Skiba, 52, leaves home in his delivery truck each morning to supply fresh bread throughout Sochi, he gets a view of the new sporting facilities: Fisht Olympic Stadium in the valley and the grand ice-skating palace, which shimmers in the moonlight like a pearl. It looks as if it's all right nextdoor.

Oympia Park is located less than two kilometers away from Skiba's home. What worries him these days, though, is the fact that this distance isn't remaining constant. The space between his home and the stadium is decreasing, slowly but ever so surely. The hillside upon which his home is built is sliding down into the valley at a pace of 1.5 meters (nearly five feet) per year, Skiba claims.

Residents of Baku Street had long been puzzled by the erosion that was causing their homes to slide or lean. A thick forest begins just behind the home of Skiba's neighbors. Sometimes they collect firewood there. It's in this forest that they first discovered the reason for the landslide. Excavators there dug out a pit where trucks had been dumping rubble -- waste from the Olympic construction sites. "The garbage dump has altered the groundwater flow on the hill," says Vladimir Kimayev, a member of the group Environmental Watch. "That's why the homes are sliding."

The worst hit home is a multi-family structure located across the street from the Skibas. Over the course of a few months, the five-story building slid down the hill along Baku Street. Before it was torn down, it destroyed the wooden hut of a neighbor. Skiba says a five-story building should never have been allowed to be built in Baku Street. The construction company responsible for it, like so many in Sochi, had not obtained any official permits.

A Promise of 'Green Games'

Skiba says he invested around €62,000 ($84,400) in his house, money that came from savings, but also from "loans that still torment me today." The authorities approved the plans in 2010. He says they said a two-story building for two families would be no problem.

Today, when Skiba's grandchildren play in the living room, the ball always roles into the same corner. The earth movements have literally tilted the house, which now leans at four degrees -- the same slope gradient as the Leaning Tower of Pisa. Skiba has jacked up the refrigerator on one side with boards so that the compote his wife cooked won't spill out of the glasses.

When Sochi was awarded the 2014 Winter Olympic Games in 2007, the Kremlin pledged "zero waste," meaning no environmental pollution. When the news emerged in October that Russia's state railway had been dumping construction waste from a large project to create a highway and railroad link between the Sochi airport and the Olympic venues at what authorities have described as an illegal landfill in the Caucasus, the International Olympic Committee reacted with outrage. At the same time, it must have been clear that with the magnitude of investments required to prepare for an event as big as the Olympics, this promise of a "green games" would be very difficult to keep.

The Winter Olympics in Sochi are a highly complex undertaking. The Kremlin has constructed six stadiums along the Black Sea coast. In addition, ski trails have been erected, as well as ski jumps and dozens of five-star hotels on the hills of the Caucasus. The sporting facilities in the mountains and along the shoreline have been connected with a recently built mountain road. A new train line operates alongside it.

'They're Trying to Silence Me'

Environmentalists have little power against a prestigious project of this size, and most environmental organizations have already left Sochi. Environmental Watch in the North Caucasus, a regional umbrella group of activists that also includes Vladimir Kimayev, is the exception.

Environmental Watch protested against the pollution of rivers through Olympic construction and also against the destruction of forests, but it had very little success. The group also fought against any construction along the shoreline and beaches. Environmental Watch gained the attention of the international media a few years ago when activists stormed the property of several luxurious mansions that had been erected in protected nature conservation areas. One of the homes had been built by the governor of the area. Another residence -- a veritable palace with a casino and helicopter landing pad -- was reportedly intended forVladimir Putin himself.

One environmental activist accused of damaging the fence of the governor's residence was even given a three-year suspended jail sentence. And one year ago, Environmental Watch head Suren Gazaryan became the subject of an investigation. He was accused of attempted murder. It was alleged that Gazaryan had threatened to kill a guard on the grounds of the mansion intended for Putin and that he had wielded a stone. The environmental activist has since applied for political asylum in Estonia.

However, activist Kimayev has chosen to remain in Sochi. In order to avoid the long traffic jams in the coastal city, he often travels on his moped. But that, too, proved dangerous for the activist this fall when his brakes failed. Kimayev believes his moped was sabotaged. "They're trying to silence me," he says.

Is President Putin the Last Hope?

Local authorities have offered Tigran Skiba and others of Baku Street emergency accommodations, but they only include one room for each family. For the time being, Skiba has decided to stay in his leaning house. He often stays awake at night listening to the creaking sounds the house makes, just in case he needs to wake up his wife, children and grandchildren if he fears it is going to collapse.

The family believes its last hope lies with President Putin. Skiba's neighbor Svetlana Afanasyeva, 60, stands in her front yard, a resolute woman wearing a bathrobe. She used to live down along the coast until construction began on the sporting facilities, in an area known as the Imereti Depression. Svetlana and her husband were paid a generous amount of compensation for their move -- around €250,000. With the money, they purchased an apartment for their daughter, the property on Baku Street and a wooden house that is now falling apart.

Afanasyeva recently wrote a personal letter to Putin. "Your honorable Vladimir Vladimirovitch, I am writing to you from Sochi, which was an enchanting place until the pigs came," she write. The letter ends with a plea: "Perhaps the next time you are in the gorgeous new city down below, you might pay attention for a moment to what is happening to us up here on the hill."