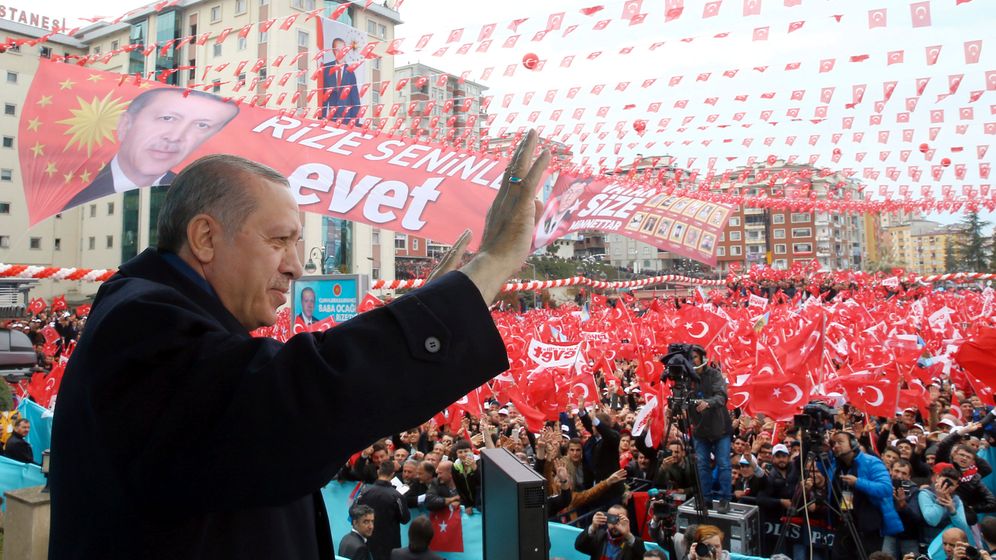 Ahmet Mumcu risked his life for Recep Tayyip Erdogan. He took to the streets for the Turkish president, he stood against supporters of the attempted coup last summer and has even helped organize Erdogan's campaigns in the past. But now, he says, he doesn't know who he should be fighting for anymore. "For Turkey? For the AKP? Or only for Erdogan?"

Thirty-six-year-old Mumcu, a lanky, bearded man, is sitting in his cousin's office in Bursa, located in western Anatolia. He doesn't want his real name to be published, because Mumcu is having doubts about his idol, and such a thing isn't completely without risk in present-day Turkey.

On April 16, Turks will vote on instituting a presidential system that hands significant additional powers to Erdogan. Mumcu believes the reform will turn Turkey into a one-man state. "Erdogan is going too far," he says. His cousin concurs: "I have always voted AKP," he says, using the abbreviation for Erdogan's Justice and Development Party. "Now that's over." He says that Erdogan had betrayed the party's ideals: "He is the president. He lives in a palace. But he still wants more and more power."

Especially since the attempted coup of July 15, 2016, Ahmet Mumcu has felt alienated from his party. Since the night of the coup, he has had to watch as innocent people were imprisoned as conspirators. His father-in-law is now behind bars because years ago he worked with an aid organization associated with Islamist cleric Fethullah Gülen, who Erdogan accuses of having masterminded the coup. "The entire country is suffering because of the war between Erdogan and Gülen," Mumcu says.

He is giving expression to what AKP strategists have been saying in confidential circles for weeks: Support for the presidential system is crumbling. Erdogan may be giving the impression that the entire country is behind him, with his speeches resembling religious masses. On Sunday a week ago, tens of thousands cheered him on in Ankara.

But some pollsters see the "no" camp ahead by as much as 10 percent. Even previously loyal Erdogan supporters, including party functionaries, don't understand why the president so desperately wants this referendum. According to polls, one third of AKP voters are fluctuating between yes and no. The new system would concede powers to the president that even the nation's founder, Mustafa Kemal Atatürk, didn't have. The president would be able to appoint ministers and 12 of 15 constitutional judges, and he would have the power to dissolve parliament any time he wanted to. The position of prime minister would also be eliminated. Erdogan claims the reform is necessary to secure stability and prevent further coup attempts. But he already has more power than any other politician in recent Turkish history.

Campaign posters plasterd with Erdogan's visage hang everywhere in Bursa. The balconies are decorated with Turkish flags and vehicles drive through the streets blaring AKP election songs. The AKP is trying to create excitement, and that shouldn't be too difficult here in Bursa. The city is Turkey's fourth-largest and a higher-than-average share of residents voted for the AKP in the November 2015 parliamentary election.

For a long time, the residents of Bursa were the way Erdogan wanted them to be: hard-working and pious. The city has developed into an industrial center and the government built brand new residential neighborhoods, with shopping malls and mosques. But since the attempted coup, the economy has collapsed and many storefronts now stand empty. Mumcu's cousin, who runs a textile company, says that his revenue has dropped from 50 million euro to 2 million in the past year.

Mumcu, a pious Muslim, built up a local AKP association. The party was his home. He hasn't officially left it, but he has pulled back from the campaign for the upcoming referendum, as have many of his fellow party members. Previously, the AKP had been able to rely on an army of volunteers in its election campaigns. Now, though, according to Mumcu, almost half of the 17 AKP district heads have stepped down in Bursa alone. Across the country, parliamentarians are complaining about a lack of enthusiasm among AKP members. The party is split, with one part having turned its back on the president and the other worshipping him like a cult leader.

Fatima Erdönmez is standing next to an AKP tent in front of Bursa's Sehreküstü Mosque and handing out flyers printed with the word "Evet," or yes. The AKP's campaign song -- a hymn to Erdogan, "the architect of the new Turkey" -- is droning from the speakers. "The opposition is painting the presidential system in a bad light by spreading false information," says Erdönmez. "We will still triumph."

Erdönmez, 38, works as an engineer in her parents' business. She wears a headscarf and speaks fluent English, having completed her college degree in the U.S. because women who wore headscarves weren't allowed to attend Turkish universities under pre-Erdogan governments. In 2005, she returned to Turkey, and immediately felt that the country she was returning to was better than the country she had left. Erdönmez wanted to be part of the change and has been organizing AKP campaigns in Bursa since 2012.

She is used to listing the AKP's accomplishments and can easily recite the number of kindergartens, schools and hospitals the party has built in Bursa. But on this afternoon, Erdönmez finds herself faced with critical questions. One man wants to know why Erdogan made his son-in-law the energy minister, despite having promised not to bring any family members into the government. A woman in a headscarf complains that her family can barely pay the rent anymore because of the plunge of the Turkish currency, the lira. Erdönmez smiles stoically and promises that security and prosperity will return as soon as the presidential system is introduced.

But even members of her own team have doubts. One campaign volunteer answers a question about whether he will vote yes or no with: "I want only the best for my country."

Creating His Own Enemies

The AKP is having difficulty hiding the displeasure among its members. Supporters are now having to be bused in to campaign events in eastern Anatolia and even in the hub of power, in Ankara, criticism of Erdogan is growing among his allies.

Early on in his first term as prime minister in 2003, Erdogan assembled a broad coalition to support him, including members of the Islamist Milli Görüs movement, moderate Muslims and liberal opponents of the military. But on the long march to autocratic rule, he has sacrificed one ally after another.

Former President Abdullah Gül, former Prime Minister Ahmet Davutoglu and his deputy Bülent Arinc have all largely retired from politics. They refuse to endorse the presidential system. Former Economic Minister Ali Babacan, who was widely admired by foreign investors, has long been seen as a critic. Of the 50 founders of the AKP, fewer than half are still in the party.

Lawyer Dengir Mir Mehmet Firat is one of those founders to have left the party out of irritation with Erdogan. He turned his back on the AKP in 2014. "The AKP was more than a party. It was the promise of more democracy," he says. "But we were so enthralled with our success that we didn't see the authoritarian tendencies."

Firat believes that three events led to the radicalization and division of the AKP: the power struggle with the military, the Gezi Park protests in 2013 and the quarrel with the Islamist Gülen movement.

Erdogan and Gülen were once allies. Together, they clipped the military's wings but then quarreled in 2013 over the distribution of their newly gained power.

The coup attempt, which Erdogan blames on Gülen, has definitively split the party in two. Around 130,000 public servants have been suspended from their jobs while 45,000 more have been arrested as suspected conspirators. The purge mostly affected people from the conservative Islamist milieu that had previously been broadly supportive of the AKP.

Now, with just a few days to go before the referendum, nervousness is growing in the party. Previously, Erdogan had always managed to unite the party behind him before elections. But the discord within the AKP can no longer be denied.

What If He Loses?

"At one point, Erdogan convinced people to support him through his charisma and his vision of a democratic, strong Turkey. Today he rules through intimidation and fear," says Etyen Mahcupyan, who plans to vote no on April 16. The Armenian-Turkish journalist is an AKP supporter who used to be an advisor to Prime Minister Davutoglu. In 2011, he supported the party in its attempt to reform the constitution, that had been written by the military after 1980. For two years, a coalition of politicians, academics and representatives of civil society worked on a draft law that would strengthen minority rights and guarantee the independence of the judiciary. Ultimately, the project failed.

The proposal for the presidential system that the government is now asking its citizens to support, Mahcupyan argues, would actually transform the country into an authoritarian system. "Turkey would be similar to Iraq under Saddam Hussein, not to Europe anymore," he says.

But Erdogan has an additional problem: To win the referendum, he needs to attract additional voters -- and currently, they can primarily be found among the ultra-nationalist Nationalist Movement Party (MHP). Yet luring such voters with their fascist chants goes too far even for conservative-nationalist Turks. Not long ago, Erdogan referred to the head of the MHP a "racist." Now he has apparently raised the possibility of him becoming vice-president.

There's one thing Erdogan isn't prepared for: defeat. Observers, however, believe that should his referendum fail, the president would call new elections in order to get the two-thirds parliamentary majority he needs to amend the constitution. Whether he would be successful remains unclear.

Perhaps Erdogan misjudged the situation, perhaps he's taken a step too far. He may have silenced critical AKP functionaries with his authoritarian behavior, but if he loses the referendum, they may return as public opponents to his rule.

One thing is certain: No matter the outcome of the referendum, Turkey will be a different country after April 16.