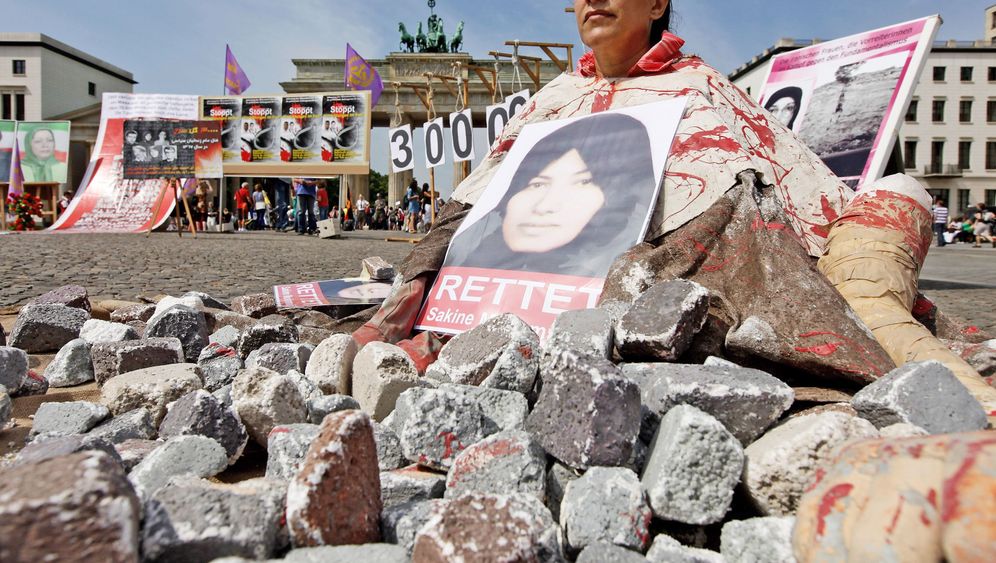 Photo Gallery: The Struggle to Save Sakineh Mohammadi Ashtiani

It's time to pack his suitcases again, vacate his attic room and move on to the next place. Mohammad Mostafaei, 37, is exhausted, and even a cold shower isn't enough to wake him up. But at least Mostafaei has a suitcase now, after being on the run for almost three weeks. All he carried while crossing the mountains into Turkey on foot was a small backpack, just big enough for his laptop and a change of underwear.

Mostafaei, an Iranian lawyer and human rights activist who has already become an international human rights cause himself, is now sitting with his few belongings in a small hotel in the Norwegian capital Oslo, wondering what happens next.

What will happen to his wife Fereshteh, 32, and his daughter Parmida, 7, who he left behind in Tehran? Shortly after he disappeared, the regime's thugs took his wife and her brothers into custody temporarily. And what will happen to his client Sakineh Mohammadi Ashtiani, 43, whose cause he had championed with such enthusiasm? Ashtiani was sentenced to death by stoning for the crime of adultery, but her sentence was commuted to hanging after international protests.

Mostafaei rubs his bloodshot eyes and holds his teacup tightly in his hands. He doesn't have much to hold onto -- except the certainty that the Iranian judges were determined to silence him. He had become a thorn in their sides, and they had grown weary of his sharp criticism of their political sentences and archaic punishments.

In his diary, excerpts of which were published by SPIEGEL in June, he criticized stoning, the death penalty for adultery in Iran. Soon afterwards, he voiced his support for an international campaign in solidarity with Ashtiani, but it was a step too far for the authorities. Even now, alone in exile, Mostafaei says he doesn't regret his efforts on behalf of his client.

He was only allowed to visit her once at the prison where she was being held, in the northern Iranian city of Tabriz. It is a rundown facility, where Ashtiani shares cell number four with 25 other women. But even the poor conditions at the prison, says Mostafaei, are easier for her to endure than her former marriage. He calls it a "silent martyrdom" and says that his client, who he calls by her first name, Sakineh, was treated "like a slave." According to Mostafaei, she became filled with "hate" and was motivated by "hopelessness." And because of the "backward divorce laws" in Iran, separation was practically inconceivable for someone like Sakineh.

In fact, Iranian divorce law is legalized discrimination. While men can readily petition for divorce in Iranian courts, women are required to provide convincing grounds. A woman has to prove that her husband is missing, refuses to support her or is "harassing" her -- through acts of violence, for example. "In Iran, there are many women like Sakineh, who are at the mercy of their husbands," says Mostafaei.

He client chose a disastrous way out of her suffering: She secretly sought comfort with someone else, a man named Nasser. Eventually, the husband must have noticed that she was having an affair, and he notified the government's moral police. His efforts were successful. Sakineh was arrested during a rendezvous with Nasser and another man. The encounter provided the authorities with sufficient evidence to try Sakineh for the crime of "rabete namashroo," or prohibited intercourse. Sakineh was given 99 lashes for her so-called crime. The unmarried men were not treated as harshly. Nasser received 40 lashes and the second man 20.

When her husband suddenly died, it seemed that Sakineh's life could take a turn for the better. But the police were suspicious. Her children -- her son Sajjad, 22, and her daughter Farideh, 17 -- suspected Nasser of having murdered their father. They urged the authorities to investigate their father's death, but they had no idea that in doing so they were essentially throwing the first stone at their mother.

Not only did the investigators conclude that Nasser had indeed killed their father, they also decided, according to Mostafaei, that Sakineh had aided and abetted her lover. She had supposedly given her husband a sedative so that Nasser could then inject him with poison, says the attorney. According to another version, Nasser, with Sakineh's support, planned to kill the husband by electrocuting him.

To protect their mother, Sajjad and Farideh forgave her for acting as an accessory to the murder. In doing so, they were utilizing a unique feature of Islamic law, which holds that the punishment for a crime must be reduced if the victim or the victim's family forgives the perpetrator.

In light of the murder plot, zealous judges pushed for a reevaluation of the extramarital relationship. Now they accused Sakineh of "zena" -- extramarital sex. The three conservative clerics on the five-member panel had demanded that verdict, says Mostafaei. The children insist that their mother is "innocent."

It is unclear how often Iranian criminals are stoned to death, their upper bodies and heads covered with a white cloth. The reformist former president, Mohammad Khatami, who was Mahmoud Ahmadinejad's predecessor, officially suspended execution of the sentence in 2002. Nevertheless, there is evidence that seven stoning sentences for adultery have been carried out in recent years -- of six men and one woman.

The government, which has executed at least 402 people within the last year, reportedly has several dozen women on death row. The women, like Ashtiani, can expect to be stoned to death. Only a few of these cases are known. Mahmood Amiry-Moghaddam, the co-founder of the organization Iran Human Rights and one of the few people that Mostafaei knows in Oslo, can name 14 people.

Ashtiani's case would probably not have attracted international attention if her passport photo hadn't been sent to human rights activists -- by her son, according to Mostafaei. As a result, his client became an icon of the anti-stoning movement and Mostafaei himself a victim of the Iranian legal system. After being summoned for questioning several times, he fled to the city of Khoy in northwestern Iran, where smugglers took him to the area near the border with Turkey in an SUV. From there, he hurried across the mountains on foot, under the cover of darkness.

Human smugglers in Iran usually charge up to $3,000 (about €2,340) for their services. Since the protests against the contested reelection of President Ahmadinejad in June 2009, hundreds of critics of the Iranian government and members of the opposition have used smugglers. In his case, says Mostafaei, the smugglers helped him in an "act of friendship." Only one man, a Turkish farmer, wanted money -- $70 -- for taking him to the city of Van on his horse.

While Mostafaei's associates in Tehran were still speculating over whether intelligence agents had arrested him, he had already arrived in Istanbul. From there, he planned to fly to Oslo, where he had once spent "three nice days" with his wife.

Mostafaei was not able to board a flight to Scandinavia, however. Instead, he was arrested, charged with illegal entry and imprisoned in a police holding cell at the Istanbul airport, where he spent almost a week fearing that he would be extradited to Iran. The police interrogators told him that an Iranian delegation had come to Istanbul, apparently to take him back to Tehran. Although regime critics from Iran had not been deported until then, they are not welcome in Turkey, because Ankara fears that they will harm its current good relations with Tehran.

It was only when a Turkish newspaper published a report about Mostafaei's arrest, after he had been held in Istanbul for four days, that diplomatic pressure from Europe began. The United States also reportedly supported his cause, even indicating that he could be granted political asylum there. But Mostafaei chose to fly to Oslo instead, using a visa he had obtained at the Norwegian Embassy in Tehran months earlier.

Mostafaei doesn't want to apply for asylum, because he plans to return home one day. "I love Iran," he says, sounding homesick already, although the government in Tehran gives him little hope. His client was paraded on state television as an underhanded murderer of her husband, with no mention of the adultery for which she is to be stoned to death. Now she blames her attorney for having made her case public and thus bringing "shame" on her family. Human rights activists like Amiry-Moghaddam are convinced Ashtiani's statement was "forced." Was it a prelude to her execution?

Mostafaei's allies expect him to remain in Norway for a long time to come. Now it's time for him to pack for his next destination, a small apartment in the city of Drammen. The town is only half an hour's train ride from Oslo where -- as he plans to do at the beginning of this week -- he can report to the rest of the world on the barbaric punishment his former client could face.

Mostafaei hasn't given up his fight for Ashtiani yet.

2 Bilder Photo Gallery: The Struggle to Save Sakineh Mohammadi Ashtiani 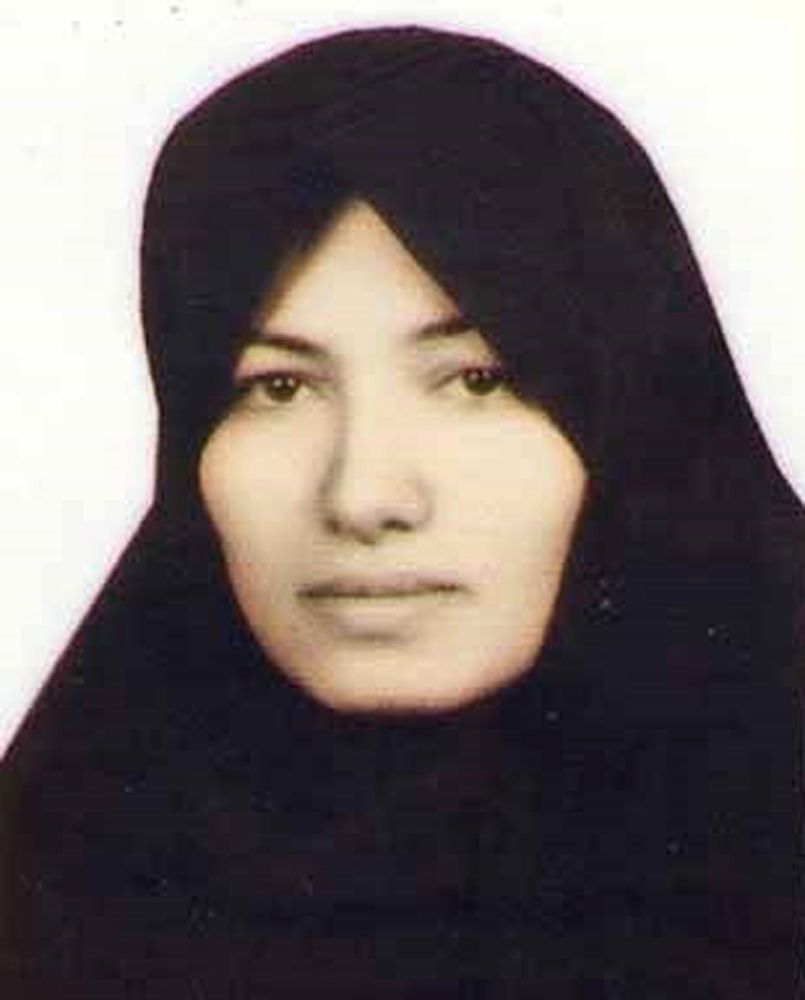 Sakineh Mohammadi Ashtiani became an icon of the anti-stoning movement after her son gave her passport photo to activists.