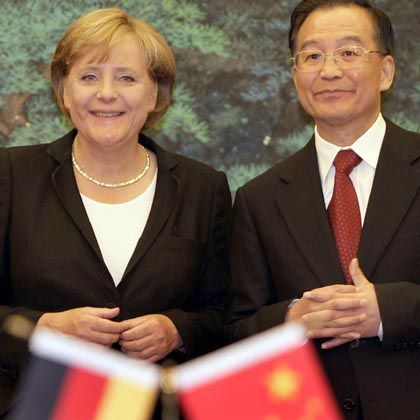 German Chancellor Angela Merkel was all smiles after meeting Chinese Premier Wen Jiabao on Monday, praising relations between the two countries as open and constructive.

But her visit has been marred by a report in SPIEGEL that a large number of computers in the German chancellery as well as the foreign, economy and research ministries had been infected with Chinese spy software. Germany's domestic intelligence service, the Office for the Protection of the Constitution, discovered the hacking operation in May, the magazine reported in its new edition, published Monday.

The Chinese government has vehemently denied the report, with the Chinese Embassy in Berlin describing the accusation of state-controlled hacking as irresponsible speculation without a shred of evidence.

But Prime Minister Wen Jiabao assured Merkel that measures would be taken to "rule out hacking attacks." During a news conference in Beijing on Monday, Merkel didn't comment on the specific allegation but said it was important that "common rules of the game" were observed in a globalised economy.

The so-called "Trojan" espionage programs were concealed in Microsoft Word documents and PowerPoint files which infected IT installations when opened, SPIEGEL reported. Information was taken from German computers in this way on a daily basis by hackers based in the north-western province of Lanzhou, Canton province and Beijing. German officials believe the hackers were being directed by the People's Liberation Army and that the programs were redirected via computers in South Korea to disguise their origin.

German security officials managed to stop the theft of 160 gigabytes of data which were in the process of being siphoned off German government computers. "But no one knows how much has leaked out," a top official told SPIEGEL.

The hacking operation has triggered fears in Germany that China may also have infiltrated the computer systems of leading German companies, to steal technology secrets and thereby speed up its inexorable economic growth. The domestic intelligence service plans to help businesses hunt for spy programs in their computers.

The alleged attack has disappointed the German government because it has tried for years to promote friendly relations with China, and has voiced only muted criticism of China's human rights abuses and environmental pollution. The espionage is robbing Germany of its key resource in the fight for international markets, namely technological and engineering know-how.

"I'm very concerned about Chinese espionage in the field of technology," Hartmut Schauerte, an expert on China in the Economics Ministry, told SPIEGEL.

The head of domestic intelligence for the southwestern German state of Baden-Württemberg, Johannes Schmalzl, said: "Sixty percent of our alleged cases (of economic espionage) are related to China."

After a one-hour meeting with Wen on Monday, Merkel said she was satisfied with the state of German-Chinese relations which had now reached a level where both sides could address problems and engage in constructive discussions. She urged the Chinese government to step up its fight against product piracy and do more to protect the environment.

German leaders regularly visit China to drum up business there. Merkel's four-day visit ends on August 29 when she will fly on to Japan for two days.

With reporting by SPIEGEL staff