The flashes of two explosions, severed limbs, three dead, including a child, thousands of innocent people attacked by murderers who transformed a cheerful day in the worst way possible. That's what happened in Boston, and the bad news is: It will happen again, sooner or later, in another place and at another time, because this is the world in which we live today.

What happened in Boston is part of everyday life in Baghdad and Kabul, a constant threat in Tel Aviv and Jerusalem and a nagging fear in Moscow, Lahore and Islamabad. Major acts of violence have become traumatic events in Beslan in the Russian Republic of North Ossetia, in Balinese and Tunisian villages, in Egypt, Algeria and Norway. They have engraved themselves into the history of large, proud cities like London, Madrid, Mumbai and Marrakesh, Istanbul, Jakarta and New York.

Since Sept. 11, 2001, these places have all seen terrorist attacks committed by murderers motivated by the delusions of Islamism or right-wing extremism, or the master plans of nationalism and separatism. Of course, none of these -isms can ever amount to more than half-baked palaver because, in the end, their proponents will never be able to explain why it makes sense to indiscriminately kill children.

That's why our sadness is mixed with inexpressible rage, a rage that can become overpowering, especially in the United States. In the days of former President George W. Bush, the killers were always threatened with death and war, and with relentless pursuit to the ends of the earth. Promises were made to do everything humanly possible to hunt down the terrorists, without recognizing that the real danger of terrorism lies in its ability to trigger such indiscriminate verbal outbursts. The barbaric thought patterns of the attackers begin to exert their real toxic effect when the innocent victims turn to violence themselves.

Breaking with a Deplorable Tradition

Since 9/11 America has, too often and too quickly, been willing to question the strength of the civil, constitutional state. Torture was countenanced as "enhanced interrogation," and to this day terrorist suspects are put to death by drone strike, without a hearing or a trial. The detention camp at Guantanamo Bay remains a symbol of the idea that the leading power in the West tends to bend its own values. All of this strengthens instead of weakening terrorism.

The first official reactions heard in America after the bombings in Boston are encouraging. President Barack Obama took pains to remain calm, breaking with the deplorable tradition of the Bush years to promise revenge while invoking the rule of law. Obama knows full well that the United States needs no new anti-terrorism laws, no new government agencies, no expansion of police and intelligence operations and, most of all, no more inflammatory speeches.

The dramatic search for the two bombing suspects was undeniably a manhunt, and the social networks, especially Twitter, were filled with false accusations and hateful tirades. But none of this changes the quality of Obama's behavior, whose speech was statesmanlike in a positive sense: relaxed and filled with confidence in the president's own, broadly legitimized civil power.

Queen Elizabeth II served as a role model when she managed to set a similar tone after the London bombings in 2005. She spoke to her subjects of her sadness and sympathy for the victims, she thanked the emergency services and the people of London, and then she said, briefly and concisely: "Those who perpetrate these brutal acts against innocent people should know that they will not change our way of life."

This is what the voice of civilization sounds like, and it cannot be allowed to fall silent merely because a few cave dwellers are constantly feeling marginalized. Today and in the future, we should always reiterate the thoughts of the Queen's and Obama's calm words whenever terror happens to strike once again. In fact, the message to such murderers must always be the same: You cannot change our lives. You can blow up your bombs, but our culture, our values and our societies are stronger than your desire to destroy them. These are the best answers to terror of any stripe.

They are also based on a levelheaded assessment of this violent era that began at the beginning of the century. Unfortunately, many Americans still lack this levelheadedness. The desire to put casualty figures into perspective shortly after a horrible attack may seem indecent, but one observation repeatedly comes to mind: The response to acts of terror is always disproportionately large in the United States. The social networks only amplify this tendency. Anyone following the flood of tweets on the Boston bombings could be led to believe that American victims are more important than others.

It doesn't take a prophetic gift to predict that the media reaction to Boston will, once again, be far more extensive and prolonged than is usually the case in comparable situations in other countries. When almost 800 people died and more than 1,500 were injured by four suicide bomb attacks in the Sinjar area of Iraq in August 2007, the media response was loud, and yet it was much quieter than is now the case in the Boston bombings, which have killed three people and injured more than 180. The bombing in Baghdad that killed 27 people on Thursday had already been relegated to the second page of newspapers by Friday.

A double standard is being applied here, and that is a scandal that is hardly ever mentioned. But if we truly hope to undermine terrorism, we in the West should show the same amount of sympathy and compassion for the stories of victims around the world as for those in America. Only then can we create an international movement against terror.

Instead, a sort of Western navel-gazing routinely takes place, one that distorts perception. The New York Times, which should have known better, compared the scenes near the finish line of the Boston Marathon to a war zone, which is precisely the kind of language Obama avoided in his speech. Two bombs exploding in Boston do not make the city a war zone, even if the television footage repeated for days on end suggests otherwise.

Boston only becomes a war zone if people's minds are constantly filled with the language of war, with the verbal images that only occur to those who see themselves in a state of war. Regrettably, this is precisely what has happened to many Americans -- and particularly many American politicians -- in recent years.

Instead of steadfastly dedicating themselves to the country's development, its culture and its many social problems, but also building on its many strengths, they have allowed the dangerous and diffuse feeling of an ongoing national threat to eat away at them. Instead of holding on to their own way of life, as the Queen put it, they proceeded to change for the worse, in the misguided hope of being able to create absolute security. But absolutes cannot be had in democracies.

We have to admit to ourselves that there is no fully satisfactory answer to the question of how governments and free societies should react to the threat from the fragmented micro-terrorism of today. We seem to have solved the technical side of the problem, more or less. Robust security apparatuses have been created around the world since the shock of 9/11. Their success in the effort to combat terror is undeniable, and the professional work of police officers, intelligence agents and soldiers has helped thwart countless attacks.

A Serious Threat for the US and Europe

Nowadays, the courts also have sufficient latitude to conduct investigations and even to convict perpetrators of merely planning attacks that have yet to be carried out. But this doesn't solve the problem of how to minimize the constant stress societies face, the political and cultural damage terrorists inflict. It is unclear how to prevent this stress from transforming our open, free societies into closed societies that lack freedom. It poses a serious threat to both the United States and Europe.

This raises a few questions that are tinged with anxiety. Is the Netherlands today, after the murders committed by Islamist fanatics, and after the shrill debates over immigration and the Muslim minority, still the same country it was 10 or 20 years ago? After the horrific acts of madman Anders Breivik, can Norway still preserve its sophisticated democracy without compromise? Has Great Britain, which probably has more surveillance cameras in public areas than any other country, truly been able to preserve its way of life in the decades since IRA terrorism and the more recent activities of Muslim extremists?

The world of statistics and sociology gives us an idea of how mysterious social debates and collective states of mind can sometimes be. For instance, the fear of crime in a society can be completely disconnected from the actual threat. It can be small, even though the threat is high, but it can also be completely exaggerated when there is hardly any threat at all. The media plays an important and often inglorious role in this context, and when its influence is combined with that of politicians, it can shape the self-perception of societies in critical ways.

In the years since 9/11, the United States has long misjudged the real levels of danger. The threat of a devastating attack existed and still exists today, but in the cold light of day, the individual's concrete risk of becoming a victim of terrorism was extremely small. It was certainly completely out of proportion with the heated debate being conducted at the same time on terror and how the country could protect itself most effectively and with the most brutal means possible. This is changed much by the sad events in Boston.

The lesson of Boston is not, as one reads and hears here and there, that terror has returned to America. In the precarious times in which we live, terrorism is always an awful possibility, and when it strikes, we shouldn't pretend to be more surprised than we really are. The more routine our response to terror, the weaker it becomes. The more we emphasize the civil strength of our modern, democratic societies, the more senseless all attacks will become. This is the real lesson of Boston: Bombs and terror cannot destroy our way of life. The Boston Marathon will take place in 2014. And it will once again be a day of celebration. 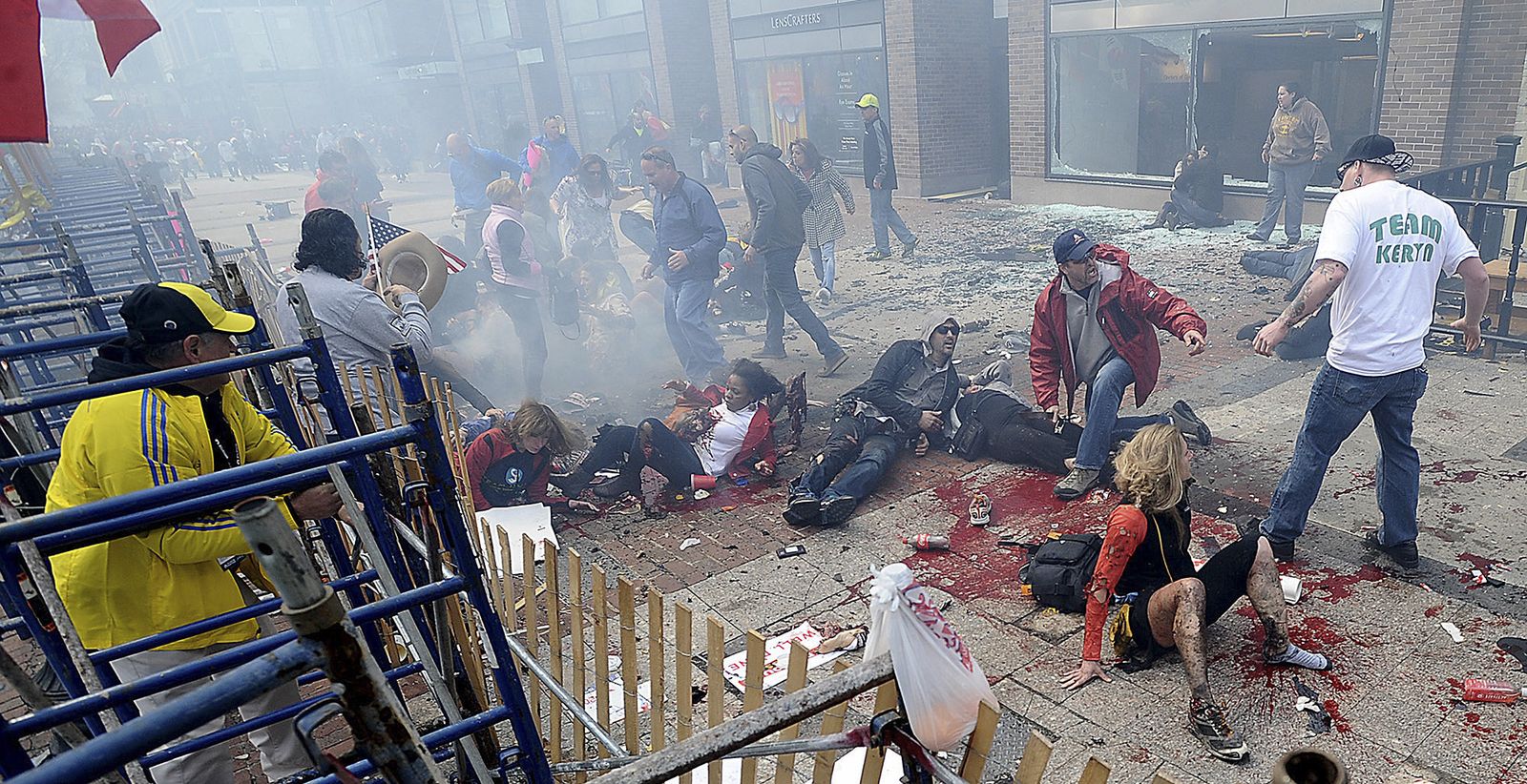