In discussions, especially with young people, I am often asked whether I believe that the deployment of German soldiers in Afghanistan is justified and successful. I respond by describing my visit to Kabul in May 2002. At the time, shortly after the overthrow of the Taliban, I visited a newly opened school, where I was greeted by young, unveiled girls. The students in this girls' school, filled with joy and in an environment free of violence and prohibitions, were doing something that we take for granted: attending school and learning. Many of us have forgotten that this was precisely what the Taliban denied these girls and young women for many years. I was very moved by that visit, and it confirmed my belief that Germany had to make a contribution to bringing down the Taliban.

After the horrible Sept. 11, 2001 terrorist attacks on New York and Washington, the United States and its allies were forced to intervene militarily in Afghanistan, because the Taliban regime harbored, trained and supported the terrorists. For the first time in its history, NATO invoked Article 5 of the Washington Treaty, which provides that if a NATO Ally is the victim of an armed attack, all other members of the Alliance will consider it as an armed attack against all members. Germany had to and wanted to fully meet its obligations under the alliance. At the time, I assured the United States of our "unlimited solidarity." For the first time in our country's postwar history, German soldiers were to become involved in a combat mission outside Europe. This momentous decision divided Germany, and the rift penetrated into the parties in power at the time, the Social Democratic Party (SPD) and the Green Party. To obtain clear support within my coalition government, I tied the German parliament's decision on Nov. 16, 2001 to a vote of confidence.

The Bundestag's decision put an end to the chapter of Germany's limited sovereignty after World War II. It made us an equal partner in the international community of nations, one that had obligations to meet, such as those that have arisen from the NATO alliance in the case of Afghanistan. However, we Germans also acquired rights, such as to say no in the case of the Iraq war, because we were not convinced of the merit of a military intervention. In other words, the deployment of the Bundeswehr in the Hindu Kush is an expression of Germany's complete sovereignty over its foreign and security policy.

What does this mean, in terms of consequences? It means that we cannot unilaterally withdraw from Afghanistan right away. This would represent an abdication of international responsibility and a turning away from the community of nations. This is because our involvement is subject to the resolutions of the United Nations. More than 50,000 soldiers from 41 countries, including many Muslims, are active in Afghanistan. 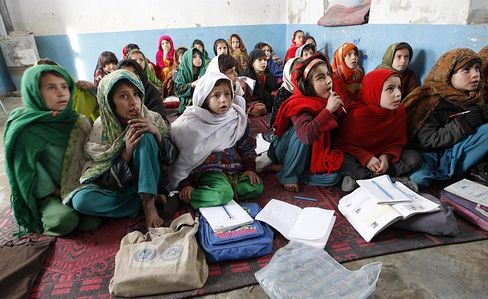 After being kept out of schools by the Taliban for years, 2 million Afghan girls are now receiving a proper education.

For this reason, demands for an immediate withdrawal are irresponsible. Such a withdrawal would strengthen the Taliban and, in the worst case, give it control over the entire country. This would be a setback for Afghan society and it would represent a great threat to international security. Moreover, we should not forget the successes of recent years in the reconstruction of Afghanistan. Eighty-five percent of the population now has access to health care, 6 million children are back in school and 2 million of them are girls. Roads, wells and sewage canals are being built. The people were able to freely elect their country's leaders.

These are successes that serve as a basis for the further development of a free and sovereign Afghanistan. But we also know that development is not possible without peace. Civil development is the Taliban's greatest enemy, which is why it fights such progress. For this reason, military protection of development activities remains indispensible.

But when women and men from Germany, working as soldiers, aid workers, police officers or diplomats are risking their lives and, unfortunately, sometimes losing them for the sake of peace and stability in Afghanistan, a critical interim assessment of this involvement, which has existed for more than seven years now, is certainly appropriate. And the question of how much longer this is supposed to last is also appropriate. I believe that the Bundeswehr's mission can be ended within 10 years.

The security situation has deteriorated in the last three years. This has also affected the north of the country, where German troops are active. The resurgence of the Taliban is a consequence of the policies of the Bush administration, which seriously neglected developments in Afghanistan. At the 2002 NATO summit in Prague, I already warned that an Iraq campaign would result in the weakening of the international anti-terror coalition and that we would be distracted from the actual conflict with terrorism in Afghanistan and Pakistan. The difficult security situation in Afghanistan is a consequence of this mistaken approach. This dilemma is aggravated by the fact that in the regions where the Americans bear the principal responsibility, a disproportionately greater amount of weight is assigned to the military component than to civil reconstruction. In the north, on the other hand, the Bundeswehr is very well regarded by the local population because of its commitment to reconstruction. This is also reflected in a more stable security situation. 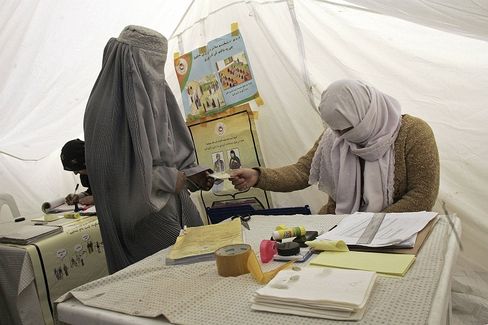 An Afghan woman receives her voter registration card at a registration centre in Kandahar in February 2009: The Afghan people were able to freely elect their country's leaders.

Another major deficit is the deficient government structure in Afghanistan and the intolerable corruption, which reaches into the highest levels of government. The central government has only limited access to the country, essentially to only the capital Kabul and a few larger places. In addition, the Afghan security forces, the army and police, currently lack sufficient numbers and training to be able to guarantee security in the country. For this reason, Foreign Minister Frank-Walter Steinmeier has correctly made it clear to the German parliament that the task of securing, stabilizing and rebuilding Afghanistan cannot be neglected, neither by the German government nor the international community of nations.

In my opinion, we now need a stronger commitment by the international community, but especially by the Afghans themselves. What is needed is a comprehensive approach, a coordinated effort with regard to security and reconstruction policy. What needs to be done, from my perspective?

A Timeframe Must Be Set for Troop Withdrawal

First, the military presence remains the prerequisite for reconstruction in Afghanistan. This presence must even be strengthened in the short term to improve the security situation. For this reason, both raising the upper limit for the German ISAF mandate from 3,500 to 4,500 soldiers and the new US administration's announcement of its plans to add more troops are correct. However, a uniform NATO plan is also needed. 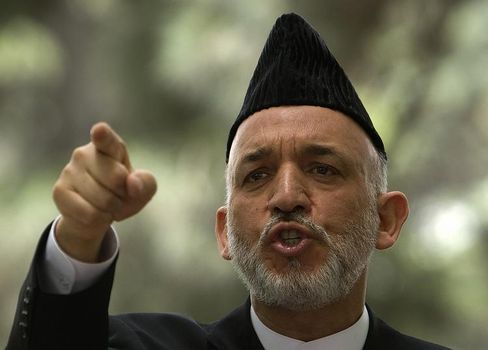 Afghan President Hamid Karzai: "A political fresh start would be desirable in Afghanistan."

We need a blunt analysis within the NATO alliance on why efforts to pacify southern Afghanistan have failed. I am convinced that the Bundeswehr's concept, which tends to be militarily conservative and is considerate of the population and civilian facilities, will be more successful in the long run. The disparity between these different strategies in the north and south is a problem, and it also represents a failure on the part of the NATO secretary general. As long as these strategies are not coordinated within NATO, one can only warn against a deployment of the Bundeswehr in southern Afghanistan. Moreover, domestic forces will have to be capable of guaranteeing security in Afghanistan within the foreseeable future, which means that the training of domestic police and military personnel needs to be expedited.

Second, the conflicts in the Middle East threaten our global security, but especially security and peace in Europe, because they are playing out in our immediate neighborhood. Aside from Afghanistan, this is primarily applicable to the Israeli-Palestinian conflict, the situation in Iraq and the dispute over the Iranian nuclear program. None of these conflicts can be viewed in isolation. To resolve them, we need a regional dialogue that includes countries like Syria and Iran, as well as the responsible-minded Gulf states.

Even in an increasingly multipolar world, the United States is and remains the determining factor in the Middle East. With the election of President Obama comes the chance of a paradigm shift occurring in American foreign policy, one that focuses more heavily, though not solely, on dialogue and communication instead of military actions. This opportunity must be taken advantage of, both for the aforementioned conflicts and Afghanistan. We need a regional conference that includes Afghanistan's neighbors, the Central Asian countries and China, Iran and Pakistan.

Russia also has a fundamental interest in a stable Afghanistan and has proven to be cooperative when it comes to NATO concerns such as the safe transport of materiel across Russian territory to Afghanistan. A successful regional plan must also include stabilizing a disintegrating Pakistan, conducting the domestic dialogue in Afghanistan with all relevant forces and continuing the process of reconciliation.

Third, civilian reconstruction efforts must be reinforced. The nations attending the Paris Conference on Afghanistan pledged $20 billion (€15.3 billion) in aid. But instead of simply being promised, these funds must begin to flow, despite the international financial crisis.

Even more than before, it is important to strengthen Afghan self-reliance, especially when it comes to the development of administrative structures, the judiciary, the police and infrastructure. And the Afghan government must agree to ensure that funds are funneled, without corruption, to the places where they are truly needed. However, I am very skeptical that is still possible under the leadership of current Afghan President Hamid Karzai. A political fresh start would be desirable in Afghanistan.

Fourth, responsibility for the country must be turned over to the Afghans. This requires both international assistance and, above all, the will of the Afghans themselves. The Afghan leadership is deficient in this regard. Too often those in Kabul have relied on international donors to make things right. I believe that the time has come, more than seven years after the overthrow of the Taliban, to establish a timeframe for the transition to self-reliance, which would be tied to the beginnings of international troop withdrawal. Only if this timeframe exists will the Afghan leadership become increasingly motivated to create the necessary conditions.

This was the goal in November 2001, when we began the "Petersberg process" under the guidance of then Foreign Minister Joschka Fischer. The process led to an Afghanistan agreement in 2006. On the basis of this agreement, the Afghans gave themselves until 2013 to independently guarantee security, good governance, the rule of law and economic and social development. This temporal horizon is certainly very optimistic.

But with concentrated and intensified international commitment, it would be possible to create the conditions, within the next 10 years, so that responsibility is gradually returned to the Afghan authorities and security forces. This would pave the way for withdrawing the international troops.

The international community now has a new opportunity to achieve the goal of stabilizing and rebuilding Afghanistan. We must take advantage of it collectively and decisively.