There have been moments in this election campaign that have brought back dark memories. In Mississippi, Florida and elsewhere, presumed Republican presidential candidate Donald Trump asked his supporters to raise their right hands and pledge their allegiance to his cause: "I do solemnly swear that I, no matter how I feel, no matter what the conditions, if there's hurricanes or whatever. Will vote on or before the 12th for Donald J. Trump for President." Tens of thousands raised their right arms and repeated the oath after him. The America media drew comparisons to Adolf Hitler.

Has the most powerful nation on earth become vulnerable to an authoritarian, nationalist leader? And what does this wave of nationalism mean for expected Democratic presidential nominee Hillary Clinton and the rest of America?

Trump's rise is the consequence of an ongoing crisis in the United States over the last two decades -- one American elites long ignored. They had no answers for Americans who live in states like Kentucky or Oregon, and who no longer understand what is happening on Wall Street, in the White House and the rest of the country. This election campaign has now brought the crisis to the fore. This is evident in Trump's victories, just as it is in the passionate support for Clinton's rival, Bernie Sanders, who has made the term "socialism" acceptable in the country once again.

America feels like an exhausted democracy, even though, at first glance, the country isn't in bad shape economically. The economy has recovered during Barack Obama's presidency, growing by 2.4 percent in 2015. Unemployment has declined to 5 percent. The United States is one of richest countries in the world. It is the second largest market for German luxury carmaker Porsche, following only China.

But this growing wealth is largely restricted to a group of multimillionaires and billionaires whose lives have become disconnected from those of the rest of the country. Since 1999, an average family's annual income has declined by $5,000 (4,420) while its assets have shrunk by a third. Two-thirds of all households are in debt, often deeply so. This breakdown into a nation of a few winners and many losers has done something to the country's mentality.

According to the New York Times, the number of people who still believe in the American Dream has fallen to the lowest level in 20 years. More than half of all Americans under 25 no longer believe that capitalism is the best of all economic systems. The strive for wealth and social advancement, forces that Alexis de Tocqueville once described as the country's binding elements, are no longer strong enough to hold its society together. The problem is further complicated by the competition between the shrinking white majority and the growing black and Hispanic minorities for jobs and wealth.

At "no other time was there as much pessimism -- valid pessimism, moreover -- about America's future as there is today," conservative columnist Dennis Prager recently wrote on his blog. And journalist Andrew Sullivan, writing in New York magazine, warned that late-stage capitalism is creating "a righteous, revolutionary anger that late-stage democracy has precious little ability to moderate or constrain." The country is exhibiting symptoms of 1930s Europe.

Trump, who has been flirting with a run for the presidency for years, has developed a perfidious instinct for this moment. He courts the people on the losing end of modernization, or, to be more precise, those who fear becoming one of them. Contrary to common belief, Trump's supporters do not consist primarily of blue-collar workers and the unemployed. Exit polls have shown that his voters have an average annual household income of $72,000, which is higher than the average salaries of Sanders and Clinton supporters. Support for Trump highlights middle-class Americans' fear of social and economic decline.

The core of Trump's policy is to react to this fear by establishing an identity through marginalization and isolation. This is evident in his campaign promises to build a wall along the Mexican border and to deny Muslims entry into the United States. "The use of ethnic stereotypes and exploitation of fear of foreigners is directly out of the fascist's recipe book," fascism expert Robert Paxton recently told the online magazine Slate. According to Paxton, Trump's campaign slogan, "Make America Great Again," sounds exactly like the slogans of fascist movements. In comments recently given to the Washington Post, Paxton added that "a sense of victimhood is absolutely essential" to the rise of fascism, "and I think that's very strong in America today," particularly among the white middle class.

Trump, like Europe's right-wing populists, is betting on aggressive nationalism as a response to this sense of victimhood and the complexities of globalization. At his campaign rallies, the seats shake when tens of thousands of fans collectively bellow their response to the question of who will pay for the border wall: "Mexico!" Trump's supporters cheer when he threatens to punch protestors in the face. And they seem to have been waiting for someone to finally promise to deport -- with force, if necessary --the 11 million illegal immigrants from Central and South America. By breaking social taboos, Trump's appearances resemble the "rallies of fascist leaders who pantomimed the wishes of their followers and let them fill in the text," Jeffrey Herf, a political science professor at the University of Maryland and expert on Nazi Germany, recently wrote in the American Interest magazine.

This aggressive nationalism is paired with an absurd authoritarianism. Indeed, there is something operatic about Trump promising his voters that after he wins the election, his first official act will be to call the CEO of Ford and force him to move his auto plants from Mexico back to the United States within 48 hours -- not to mention his vow to force Apple to stop making iPhones in China. But Trump's words have made an impact.

The further this campaign progresses, the greater the extent to which Trump modifies his domestic agenda. He deliberately targets those at the losing end of society, people threatened by social decline. He promises not to touch social security, and he guarantees that no one will starve in the streets. With these promises, he is opposing his own party, where the term social welfare state is seen as being synonymous with communism. He promises a strong government that guarantees its citizens jobs and protection. He projects both a nationalist and social message.

Fascism expert Paxton compared Trump's rallies with those of Italian fascist leader Benito Mussolini and arrived at a remarkable conclusion. According to Paxton, Trump not only resembles Mussolini in the way he sticks out his lower jaw, but also in his speech. His short, blustering sentences sound similar to those used by "Il Duce" in his speeches, Paxton writes. Like Mussolini, Trump is masterful at handling large crowds. And even in his contempt for the establishment, he resembles the leaders of revolutionary movements in the Europe of the 1920s and 1930s. Trump isn't leading a party but a movement, and his supporters are pledging their oath of allegiance to the candidate, not the Republicans.

History isn't repeating itself. There are no signs that Trump would be prepared to invade other countries or murder millions of people. Nevertheless, some of his key demands -- forceful deportations, blanket entry bans for Muslims and the refusal to rule out torture -- have fascist characteristics. But Trump is no fascist -- he doesn't, after all, want to abolish the Constitution. Yet he is playing with totalitarian elements in a dangerous way.

American democracy has never been "so ripe for tyranny" as it is today, warns Andrew Sullivan, comparing the situation in the United States with that of the Weimar Republic. Is Sullivan exaggerating? Perhaps. But there are no guaranteed "happy endings" in politics. Democracy has to be defended.

It is up to America's elite and its civil society to react to the challenge. Clinton, the Democrats' likely candidate, is only partly suited for this task. As someone who has been involved in politics for decades, she represents the establishment, and politics has made her a multimillionaire.

America needs a major social debate over the causes of the rage, the unfair distribution of wealth and the excesses of capitalism. It was once the Republicans who, under Abraham Lincoln, decided to abolish slavery, thereby laying the foundation for the modern American age. The party will be challenged once again at its convention in July. Before it nominates its candidate, it could exclude all forms of racism and hate from its platform, and Trump would then have to decide whether he could run for president on this basis. On the other hand, this summer could also mark the end of a de facto two-party system, in which Republicans and Democrats no longer represent the interests of many people. Why not field a third or fourth candidate?

Trump's answer to the crisis is the exclusion of others. But the correct answer should be inclusion -- not just of Trump's supporters, but also that of society's weakest. There's much more at stake in the United States right now than the contest between two candidates. This is a question of tolerance, pluralism and the very future of a deeply drained democracy. 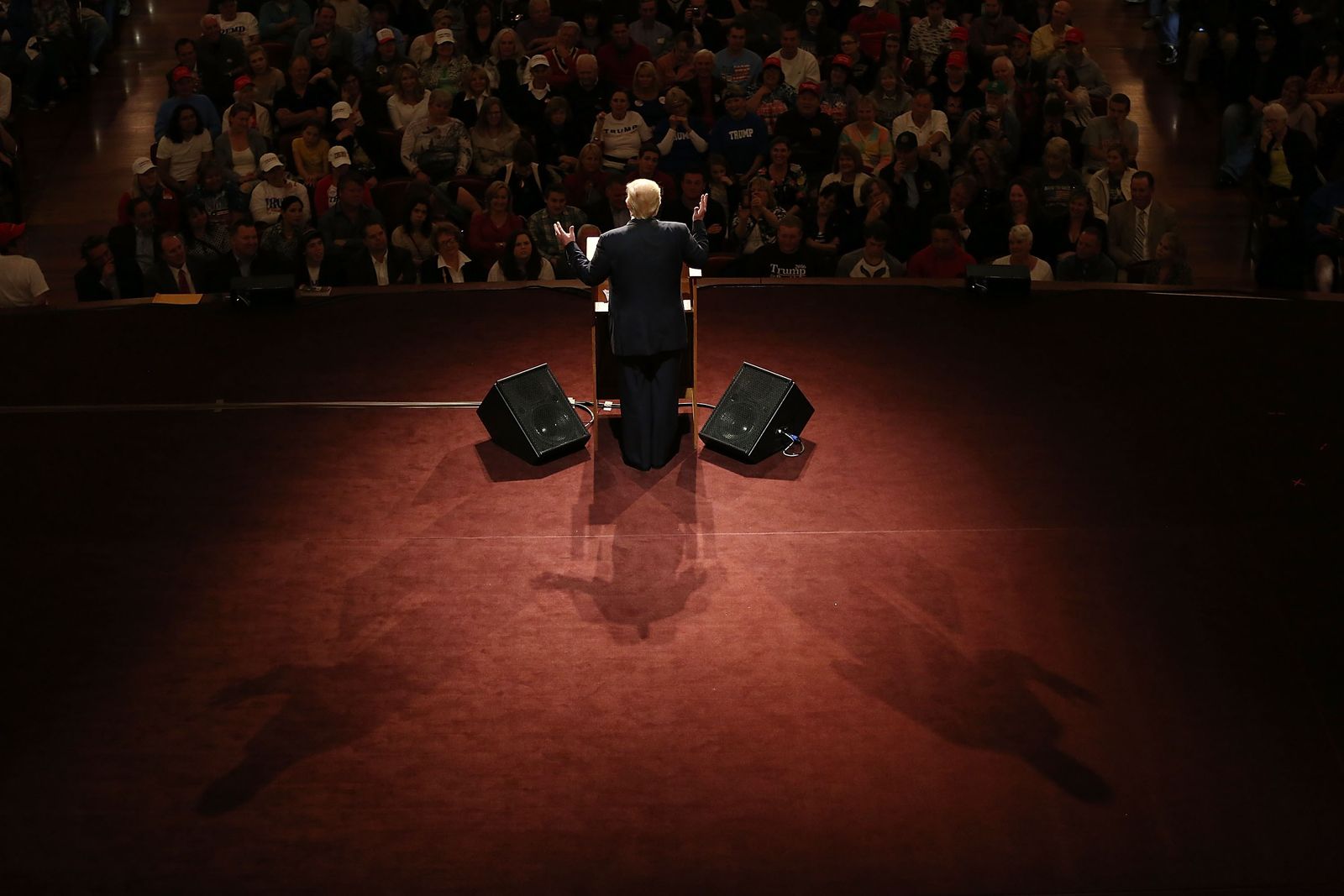