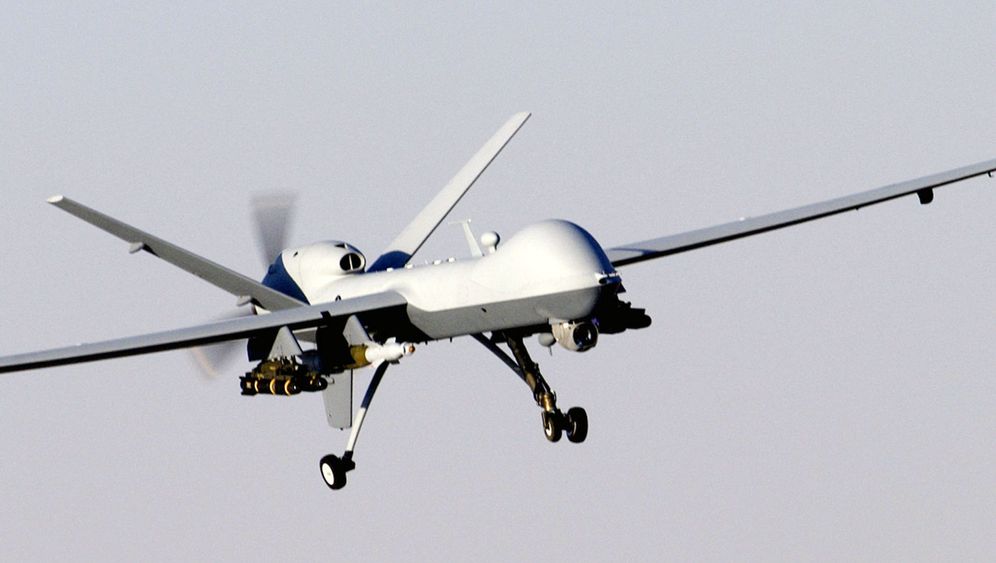 Photo Gallery: The Future of War

A suicide bomber needs to be 100 percent willing to sacrifice his life. With a drone pilot, on the other hand, the risk of pilot death drops to zero percent. The West's war on Islamist terror is currently being waged between these two conflicting priorities. Nothing is more indicative of the asymmetry of the war, and nothing is as symbolic of the cultures that are waging it. It's a war between those who are willing to sacrifice everything and those who are unwilling to give up anything -- a war of sacrifice versus convenience, bodies versus technology and risk versus safety.

Like no other weapon, the drone stems from the needs and strengths of the West. Aside from convenience, technology and safety, it also represents a moral claim. In the world of weapons, the drone is a good weapon, at least at first glance. It claims no victims on one side and relatively few on the other, because it fires precision missiles.

The German Defense Ministry recently confirmed that the German military, the Bundeswehr, is currently reviewing the question of whether it should buy combat drones. (At the moment, it only uses unarmed drones for reconnaissance purposes.) Because Germany is relatively scrupulous in matters of war, the unmanned aircraft seems to be the ideal weapon for the country.

But is it really true that the drone is a good weapon? In reality, it raises a number of ethical questions related to pride, humanity and the law.

In the history of war, close-quarters combat is considered especially noble. It requires strength and courage. Those who are weaker and more cautious prefer to keep their distance. In the Bible, David was able to defeat Goliath because his slingshot enabled him to stay far away from the giant.

Spears, bows, guns and cannons are inventions that create distance between combatants, giving the weak and the clever a chance. But even these weapons require soldiers to expose themselves to risk. They need to be physically present on the battlefield and be armed for close combat. Aircraft created even greater distance between the adversaries, but the pilot must possess the courage to expose himself to enemy fire and overcome his fear of being shot down.

Missiles were the next big step. They shifted the operation of weapons to offices, so that, in theory, even wheelchair users could become armed combatants. In the age of nuclear warheads, these soldiers face the risk of a counterstrike, which is a risk for everyone. They require neither courage nor strength nor skills. A push of a button is all it takes.

The pilots who control Predator and Reaper drones over the Waziristan region in Pakistan from their bases in the United States face only minimal risk. A suicide bomber would have to make it into their base in order to retaliate, and that's unlikely. According to the traditional concepts of combat, a war waged with drones is a cowardly war. The coward, in this equation, is the one who takes little or no risk to fight against those who take great risks.

In the world of the Islamist combatants or terrorists the old concepts still apply. What were once seen as universal male virtues -- courage, the willingness to fight and the willingness to make sacrifices (in other words, warrior pride) -- prevail in that world. A suicide bomber probably sees himself in exactly those terms. On the other hand, he is also a coward, because he often attacks unarmed civilians.

For parts of the Islamic world, drones are an expression of the West's depravity, and each new attack triggers more outrage. For them, it is despicable that a machine is performing the dangerous job, while no one engages in actual combat. But that shouldn't be a cause of concern for the West. It's an improvement that the old male virtues no longer dominate society. They have often led to calamity, as the Germans and their neighbors know all too well.

So the drone is a cowardly weapon, from the perspective of the old values, and yet that doesn't really matter. The goal today is not to find proud responses to challenges, but smart ones. To put it differently, a drone pilot can indeed be proud of the West's technology and of its cunning.

There has long been a discussion over whether humane weapons are even feasible. In other words, is it possible to create weapons that somehow protect perpetrators or lessen the damage to victims? In this context, the word humane is not an absolute but a relative concept, referring to a weapon that is less horrific than other weapons.

The leaders of the French Revolution had human rights written into the constitution, and they turned the guillotine into their weapon against deviation. It was promoted by the chairman of the health committee, Dr. Joseph-Ignace Guillotin, and it was considered to be humane, because, unlike the gallows, it killed quickly. The revolutionaries committed a massacre with this "good" weapon, with thousands of people losing their lives under the guillotine. Perhaps the death toll would have been lower if revolutionary leaders Maximilien de Robespierre and Louis Antoine de Saint-Just had had to watch their victims dangling from the gallows for long minutes, or if their heads had only been severed after multiple blows from the executioner's ax. In other words, if a weapon appears to be humane, it can create the temptation to use it more often.

The most humane aspect of drones is that they protect the troops of the side that uses them. Fortunately, the West has largely eliminated sacrificial cults. Nowadays the ideal is to survive as long as possible, preferably to the ripe old age of 90 or 100. Military science aspires to keep people out of wars, allowing robots to do the work instead. The drone is a precursor to future wars, which are expected to be less bloody.

Germany is especially sensitive when it comes to dead soldiers. In quiet times, no one is interested in the Bundeswehr's mission in Afghanistan. But as soon as there are casualties, calls to withdraw the troops become louder. Thus, the armed drone could serve to lessen the strain on the collective German psyche.

This is especially the case because drones do not devastate the area around enemy combatants nearly as much as bombardment from regular aircraft. The Hellfire missiles that are fired from drones can hit their targets with great precision, thereby keeping the number of victims relatively small.

A weapon also has a psychology, meaning that it affects the disposition of its users in its own, unique way. The drone is especially tempting for politicians of a gentle, humanitarian nature. Former US President George W. Bush, who does not fall into this category, used armed drones in Pakistan 52 times in the last four years of his presidency. His apparently gentler and more humanitarian successor, Barack Obama, has already deployed drones 285 times. Just as the drone suits Germany, it also suits Obama. Because it doesn't seem as terrible as other weapons, the barriers to its use are relatively low.

To date, the most humane of all weapons is the one that is potentially the most gruesome -- the intercontinental ballistic missile, equipped with multiple nuclear warheads, which is capable of wiping out a city of a million people. It has zero victims, because no one has dared to use it.

The "good" drones, on the other hand, have a much more tragic track record. The Bureau of Investigative Journalism in London found that the United States used drones in Pakistan 337 times between 2004 and 2012, killing between 2,524 and 3,247 people. The casualties included 482 to 852 civilians, of whom 175 were children. Of the many evils of war, civilian victims are the worst.

The high rate of civilian casualties stems from the fact that the Americans are not using their armed drones in the battlefield, but in the vicinity of people who are considered to be terrorists. Of course, this means that there will sometimes be civilians nearby who, despite the precision of drones, will lose their lives.

This is a dilemma that applies to air strikes in general. Because Western countries want to minimize their military casualties, they accept civilian casualties as a necessary evil. One example is a well-known 2009 incident involving the bombing of tanker trucks near Kunduz in Afghanistan. German Colonel Georg Klein relied on aerial images instead of sending a patrol to the river. If a patrol had been sent, the soldiers would have seen that the trucks were stuck in the mud and no longer posed a threat, and they would also have seen that the people surrounding the trucks were harmless villagers and not combatants. But that would have meant risking German lives, which Colonel Klein didn't want to do. Instead, he ordered an air strike, which killed more than 100 people, most of them civilians.

The most precise weapon for hunting down terrorists is still an intelligence agent like James Bond, but he has to risk his life during his missions, which is why the drone is preferred in real life.

A humane approach to war is a complex issue. Drones seem relatively humane, but that perception only increases the temptation to use them. They spare one's own troops, which is good, but they pose a great threat to civilians, which is terrible. As a result, the humane approach gives rise to a special form of inhumanity.

From a legal perspective, it can be less problematic to kill 1,000 people than one or 10. If many soldiers die in a short amount of time, it is considered a battle, which is part of war. International law permits the killing of combatants in a battle.

But is the use of armed drones against terrorists an act of war? Or is it a hunt for presumed criminals, which would fall under criminal law? That, in turn, would require a police investigation, a prosecutor, a defense attorney, a judge, a trial and a verdict.

The Americans don't bother with any of these things, because they see themselves in a war against terror. But it's also disputable whether targeted killings of individuals are permissible in war, because the option of capturing the presumed terrorists also exists.

There are many views on the issue among legal experts. As is so often the case, it is difficult to conclusively determine exactly what is and isn't legal. One can, however, conclude that these permanent executions are not compatible with a democratic legal culture. Even French revolutionaries Saint-Just and Robespierre lost their credibility as a result of the wave of executions (and ended up under the guillotine themselves).

Drones are a smart weapon, but also an insidious one, because the ethics surrounding their use are so complicated. Nevertheless, the Bundeswehr could be taking the right step if it acquires armed drones. But they cannot be used to hunt down terrorists. Germany is a country based on the rule of law and one which does not have the death penalty. As such, it should not get involved in remote-controlled executions. Unmanned aircraft make sense as support for ground troops during combat operations. Apart from that, the future of security policy belongs to the robots, and it would be wrong to ignore this development.

But no one should allow themselves to be seduced by the idea that this weapon is humane or good. A drone armed with missiles exposes the essential nature of war in an especially clear way. Because a drone hunts down an individual, the slaughter loses its anonymity. The victim acquires a name and a face, and it becomes abundantly clear what war is all about: the destruction of human beings. 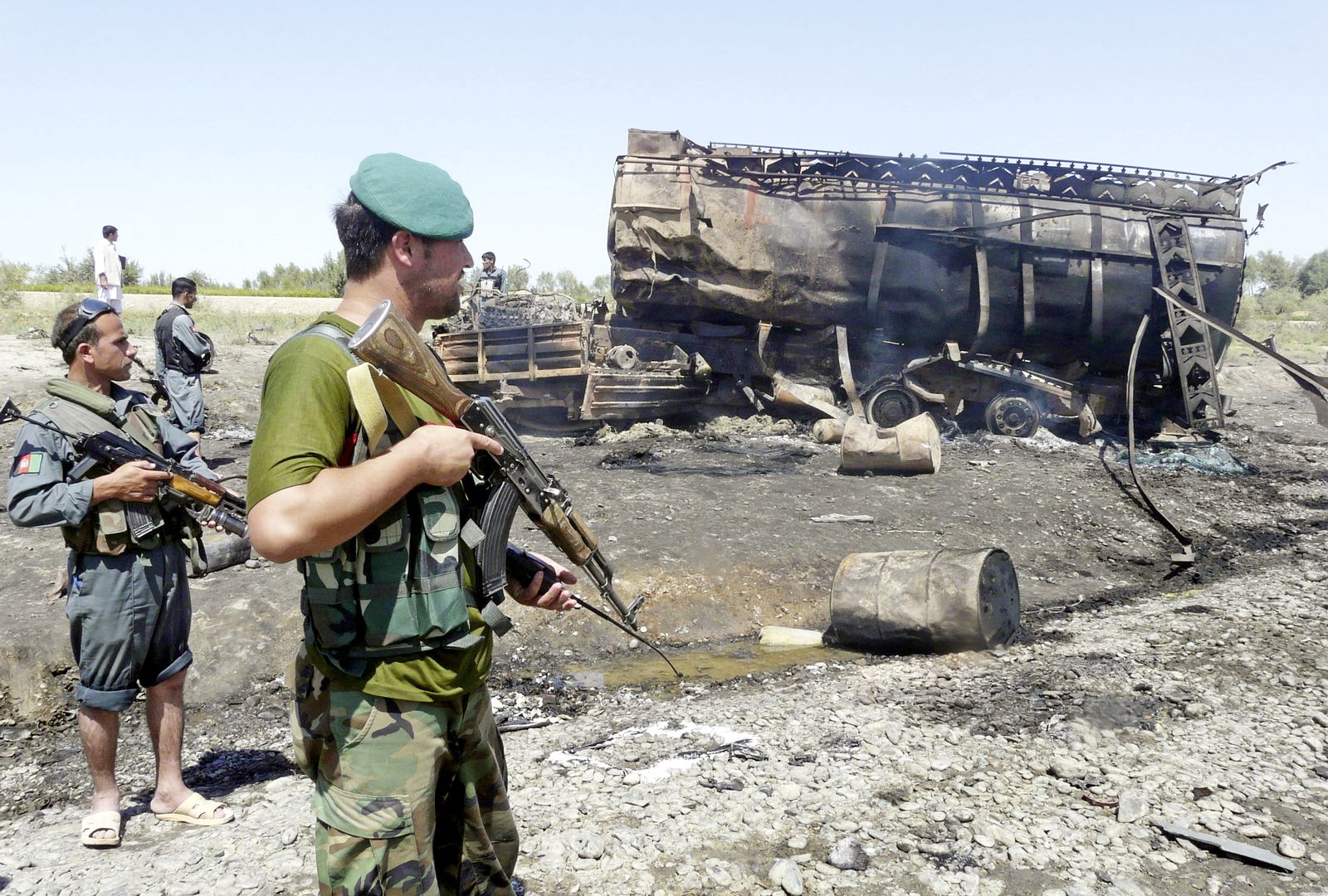 The German military is attracted to drones because it wants to prevent German casualties. Here, the aftermath of the 2009 Kunduz airstrike which killed dozens of civilians. Their deaths might have been prevented if a ground patrol had been sent to the location.