Hairegul is wearing a pink T-shirt with the word "Sunshine" printed on the front. Her fingernails are the same shade of pink, her eyelashes are heavy with mascara, and she is adept at flipping her long black hair back and forth. Meanwhile, Wang Xiaomei's hair is pinned up and five rhinestone studs sparkle in her left ear. She is wearing a striped sweater and clunky, brightly colored plastic bracelets around her wrist.

Hairegul is a Uighur and Wang Xiaomei is Han Chinese. They are both daughters of affluent parents, 21 and in the middle of their semester exams at a teacher training college in Urumqi. The two women live in the same dormitory and are sitting in the same classroom. They are both studying music and want to be teachers. They have the same dream.

A light summer rainstorm is about to descend on Urumqi, the capital of China's western Xinjiang province. A few days earlier, clashes between Uighur and ethnic Chinese students resulted in bloodshed. "We don't dare go out into the streets," say Hairegul and Wang . "We don't know how we'll get home after the exams."

When a group of Uighur students tried to stage a protest march on Sunday, July 5, police broke up the gathering. Uighurs then began attacking Han Chinese in the streets, and some set fire to and looted shops. The ensuing massacre has since shaken the country and horrified the world. At least 184 people are believed to have been killed, including women and children, and more than 1,000 were injured. It is not yet known how many of the casualties could be attributed to beatings and how many to police bullets. President Hu Jintao took the unrest so seriously that he left last week's G-8 summit in Italy and quickly flew home.

Wang became caught up in the chaos by accident. "It was so horrible, the way they were beating people. I couldn't watch, and so I fled to a police station," she says, fighting back tears.

Xinjiang -- "New Border" in Chinese -- is an enormous region that connects China with Central Asia. Of Xinjiang's roughly 20 million inhabitants, about nine million are Uighurs, a Turkic ethnic group many of whom are Muslim. They want to hold onto their region and their culture, and they feel that the Han Chinese dominate them and treat them with contempt.

The name Xinjiang evokes images of the ancient caravans that once passed through the region along the Silk Road. Even today, the landscape is dotted with oases surrounding earth-colored mosques, where old men in long beards, wearing traditional "dopa" hats on their bald heads, sit in front.

The central government in Beijing pumps billions into Xinjiang each year, transporting the abundant oil and natural gas into its booming eastern provinces. As a result, the economy in Xinjiang has grown faster than in many other Chinese provinces for many years.

Urumqi, the focus of the unrest, is a city that has plunged headlong into a new era. High-rise buildings dominate the downtown area and Western influences are evident in the city's Kentucky Fried Chicken restaurants, Max Mara boutiques and Adidas shops. Yet the romance of the Orient still exists alongside Urumqi's more contemporary elements. Uighurs can be seen selling melons and raisins in bazaars and vendors barbecue shish kebabs on street corners. Uighurs and Chinese normally live and work in relative harmony in Urumqi, even if relations between the two groups are not necessarily friendly.

But then unrest broke out. At the beginning of last week, a crowd of Han Chinese suddenly appeared in the streets, seemingly out of nowhere. Wielding clubs, iron bars and spades, they were intent on avenging the Chinese who had died on that violent Sunday. "Kill, kill!" some of them, including young women, shouted. The crowd smashed the windows of Muslim shops and upended a car in front of a mosque across the street from the bus terminal.

"They killed four of us at the bazaar, just an hour ago," says a Muslim woman wearing a headscarf. She pulls out her mobile phone to show us photos of a man streaming with blood. "He is dead," she says.

'They Will Kill Us All Tonight'

Others fetch a video camera to show footage they filmed from a window, when police officers attempted to push away Han Chinese zealots who were throwing stones at the Uighurs. One of them was waving a Chinese flag. A large puddle of blood appears on the video. "A dead man was lying there. The government is not protecting us. They have announced that they will kill us all tonight," says a slender student.

In Urumqi's old Muslim neighborhood, in the shadow of the skyscrapers, people live in old apartment buildings and poorly constructed huts. The government is trying to renovate the district, and it has built hospitals, mosques and a new bazaar there in recent years. On one wall, there is even a drawing of Mao Zedong shaking hands with a bearded Uighur. 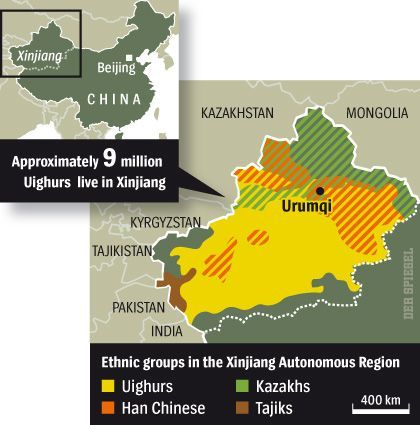 Residents look on with suspicion as a column of policemen dressed in black, wearing helmets and wielding batons, passes by. Armed policemen squat on the sidewalk in front of a bank, next to their shields and helmets. An officer is reading out loud from the People's Daily, the Communist Party newspaper, in which the lead article mentions "terrorists" and "separatists" -- the official account of the turmoil.

The Communist Party leadership is trying to regain control over the city through sheer force of numbers. A kilometer-long convoy of the Armed People's Police enters the city from the south, along New China Street. The men stand in the trucks, their shields and guns at the ready. Following behind are water canons, armored personnel carriers, command centers, ambulances and SUVs.

Many are still wondering how this could have happened and why Uighurs and Han Chinese who, until now, have gotten along as neighbors, coworkers and fellow students, would suddenly start attacking each other with clubs, knives, spades and axes.

In an echo of its reaction to last year's unrest in Tibet, the Communist Party is once again looking abroad to assign the blame. This time it is not the Dalai Lama Beijing is blaming, but a relatively unknown Uighur businesswoman who wears her hair in long braids: Rebiya Kadeer, 62, who was imprisoned for six years "for leaking state secrets" before being permitted to leave the country and travel to the United States.

Journalists and academics appearing on state-controlled television are quick to offer conspiracy theories. As in the case of the Tibetans, they say, the Uighurs are backed by "certain" governments seeking to split China and stand in the way of its becoming a peaceful major power. They deliberately decline to mention which governments they are referring to.

'We Live From Hand to Mouth'

The current crisis began in a toy factory in the southern province of Guangdong. On June 26, violence erupted between Han Chinese and Uighur migrant workers at the factory, in the wake of a rumor that Uighurs had raped Han Chinese women. Two Uighurs were killed in the fighting.

The rumor was apparently false and now the Uighurs have become deeply mistrustful. "We don't believe the reports in the press," says Hairegul, the student in Urumqi. "We had heard that 200 people were killed, not two. That was why the students took to the streets."

Anyone who hopes to uncover the roots of the friction should travel to two Urumqi neighborhoods. One is the bitterly poor area along Dawan South Street, where men are slaughtering two sheep in a small market and where veiled women dart through narrow side streets.

The residents are from places like Kuqa, Aksu and small oases bordering the Taklamakan Desert, where they were no longer able to eke out an existence as farmers. Their world was turned upside down and factories now stand where they once tilled the land. Unable to make a living in the countryside, many have come to the capital to look for work -- though their prospects are slim.

One vendor opened a small shop on one of the street corners a few weeks ago with his family's accumulated savings. He sells household goods, including pots, toothpaste and honey. A few telephones are displayed in his shop, in a place where no one can even afford to buy a mobile phone. A woman in a black caftan covering everything but her eyes sits at the cash register. The couple has a young son and the family lives behind a pink curtain in the shop. "We pay 600 yuan a month in rent, and then there are the expenses, but I haven't made a profit yet," says the shopkeeper. 600 yuan is about €60 ($84).

"Hardly any of us have work," says a tailor as he walks into the shop. "We live from hand to mouth. There are factories here with thousands of workers, and not one of them is a Uighur."

Two car dealerships across the street were burned down on Sunday. The owner is a Muslim, and so were the arsonists. For several days in a row, soldiers and policemen came to the neighborhood at night and dragged off dozens of men and adolescents.

'We Are Faster and Better Educated'

The second neighborhood is in the brown hills in the southern part of Urumqi, where large slums have sprung up in recent years. Some of the dwellings are nothing but crude wooden shacks. Uighurs from the oases and Chinese immigrants live in these crowded slums.

Uniformed men in steel helmets stand guard at the entrance to a small street market, where there have also been killings. Members of the two ethnic groups attacked one another, although no one knows who initiated the violence. Mrs. Tian is from Sichuan Province. She sells hard liquor from large clay jars, in a shop called "For Calming."

"The Uighurs complain that we took away their homeland," she says. "And they're right. Most of the vendors in this market are now Han Chinese. We are faster and better educated. The Uighurs have trouble with the Chinese language."

The Han Chinese make up about 92 percent of China's population, which also comprises 55 ethnic minorities, including the Muslim Uighurs, who feel marginalized.

Up to two million Han Chinese have moved to Xinjiang since the 1990s. For the new settlers, who see Xinjiang as simply another part of the People's Republic, this is perfectly normal. However, a Beijing observer characterizes the migration as a "Palestinization" of the region. The Han Chinese, he says, behave like colonial masters, forcing local residents to switch to Beijing time, even though the sun rises two hours later in faraway Urumqi.

Clamping Down on the 'Three Forces'

Fearing that Xinjiang could become a hotbed for Muslim terrorists seeking to use violence to secure independence for an "East Turkistan," the Communist Party has clamped down in the past few years, particularly with a recent campaign against what it calls the "three forces" -- terrorism, separatism and religious extremism. Those who criticize the government risk being imprisoned on charges of separatism or terrorism.

In the modern city of Urumqi, more and more Uighur women have taken to wearing veils, even though this deprives them of any opportunity to find work. A woman, speaking flawless Chinese, says that she once worked in a telephone shop, until she was fired after being told to choose between her veil and her job.

Under these circumstances, the Muslim residents of Urumqi are becoming increasingly enraged at being treated like strangers in their own homeland. Many feel that they are misused as colorful traditional dancers and singers, and only valued when Beijing wants to demonstrate how harmoniously the ethnic groups in the People's Republic can live together.

What happens next, after the tragedy of Urumqi? "I want things to be the way they used to be," says Wang, the music student. "But things should also be more just," says her fellow student Hairegul, the Uighur.