Until now, the European Union's Operation Atalanta, which targets pirates off the coast of Somalia, has been restricted to purely maritime operations. But that could soon change, now that the EU has agreed on a controversial expansion of the mission.

Last Friday, EU foreign ministers meeting in Brussels agreed to expand the operation to include the coastal region. According to information obtained by SPIEGEL ONLINE, the ministers agreed that Atalanta units should be able to target pirates and their infrastructure up to a limit of two kilometers (1.2 miles) inland. If the expansion is approved, it will be the first time that Western forces are allowed to target pirates on the Somali mainland.

The expanded Atalanta mandate is aimed mainly at the pirates' infrastructure, and the use of ground troops has been specifically ruled out. The operations will be limited to air strikes against targets such as storage tanks, boats and radio facilities. Initially, the EU wanted to keep secret the limit for how far forces could penetrate into the country, amid concerns that the pirates could simply shift their facilities further inland.

The limit itself was the subject of prolonged debate in Brussels. Military representatives had originally proposed a limit of four kilometers, but this met with considerable resistance from Germany and Spain. In the end, German Foreign Minister Guido Westerwelle succeeded in arguing for strict limits on the land-based operations.

An expansion of the mission could have significant consequences for the German armed forces, the Bundeswehr, which is currently taking part in the Atalanta mission with 291 soldiers and the combat support warship Berlin, stationed off East Africa. Germany is one of the few contributing countries that has helicopters on board its ships which could be used to attack targets along the coast of Somalia from the air. Military experts argue that such attacks should ideally be carried out with cannons mounted on helicopters, to hit the targets as accurately as possible and avoid civilian casualties. The helicopter cannons are considered particularly accurate, and the gun operators also have the advantage of having the target directly in front of them.

But if the German navy is to play a role in the expanded mission, then Berlin will need to get a new mandate for the operation approved by the German parliament, the Bundestag. The original plan was to get the mandate approved by Chancellor Merkel's cabinet this week in a fast-track process. Now, however, sources in Berlin say that the cabinet will not vote on the mandate until mid-April. After that, the Bundestag will debate the extension.

There are already signs that Germany's two main opposition parties, the center-left Social Democrats (SPD) and the Greens, will not support expanding the mandate to allow air strikes on the mainland. That could make things tricky for Chancellor Angela Merkel's administration. Although the government doesn't technically need opposition support to get the mandate through parliament, the German government traditionally aims to achieve cross-party support for the Bundeswehr's foreign missions, the idea being that such missions should enjoy broad support among the German population.

But even before that debate gets started properly, German politicians are already expressing doubts about the EU's new approach. Even if the operation excludes the use of ground troops, if a helicopter were to have a technical problem, or be shot down from the ground, then soldiers might suddenly need to go ashore. Western nations still have painful memories of a 1993 incident in Somalia -- later the subject of the book and film "Black Hawk Down" -- when two US helicopters crashed in the Somali capital Mogadishu and an angry mob dragged the bodies of the pilots through the streets of the city.

A Militarization of the Problem

Critics such as SPD defense expert Rainer Arnold also oppose what they describe as a further militarization of the piracy problem. Arnold argues that piracy should be fought by targeting the flows of the millions of dollars the pirates earn in ransoms for kidnapped Westerners. In the run-up to the EU foreign ministers' decision, Arnold had already announced that his party might oppose such a mandate in the Bundestag.

It remains unclear, however, whether the whole SPD parliamentary group would follow his lead in rejecting the expansion. Frank-Walter Steinmeier, for example, the party's floor leader in parliament, was involved in setting up the mission while German foreign minister, a position he held from 2005 to 2009. It would be hard for him to now reject the mission out of hand.

It's not just politicians who have misgivings about expanding the operation, either. There are also people in Germany's law enforcement agencies who doubt whether the planned attacks against pirates' infrastructure will yield real successes. In a recent closed-doors discussion, experts from Germany's foreign intelligence agency, the Bundesnachrichtendienst (BND), argued that the pirates' small bases could hardly be distinguished from fishermen's facilities from the air. Such air attacks, they said, carried a high risk of so-called collateral damage -- in other words, civilian casualties.

In addition, possible air strikes would probably only cause the pirates to move their infrastructure further inland or into villages inhabited by innocent Somalis. Such relocation would also make it harder for intelligence agencies to track down the pirates' hostages.

The sea off the Somalia coast is regarded as the most dangerous in the world. Last year alone there were around 230 pirate attacks. With Somalia still without a functioning government, scores of young men continue to set out to sea to hijack ships passing along the vital trade route. The vessels and their crews are then held hostage for ransom, a lucrative activity.

The EU launched Operation Atalanta in December 2008 in a bid to tackle the problem. Last week, EU foreign ministers decided to extend the operation until December 2014.

As well as EU member states, non-EU countries such as Norway, Croatia and Ukraine have also contributed to the operation. The force has around 1,500 military personnel at its disposal. Depending on the time of year, it typically has between four and seven surface warships and two or three reconnaissance aircraft deployed off the coast of Somalia and in the Indian Ocean. Military units are currently drawn from a core group of 13 contributing countries, including France, Germany, Italy, the Netherlands, Spain and the United Kingdom, among others.

In addition to Atalanta, there is a substantial international force in the area, including the US-led, multinational group called the Combined Maritime Forces. NATO, too, is present and ships from China, India, Japan, Russia and other countries also patrol the waters.

Until now, the fight against Somali piracy has been mainly restricted to targeting the boats used by pirates. In addition, Atalanta forces track the motherships that pirates use to operate hundreds of kilometers from the coast. The mission also provides escorts to World Food Program vessels delivering food aid to the Somali people. 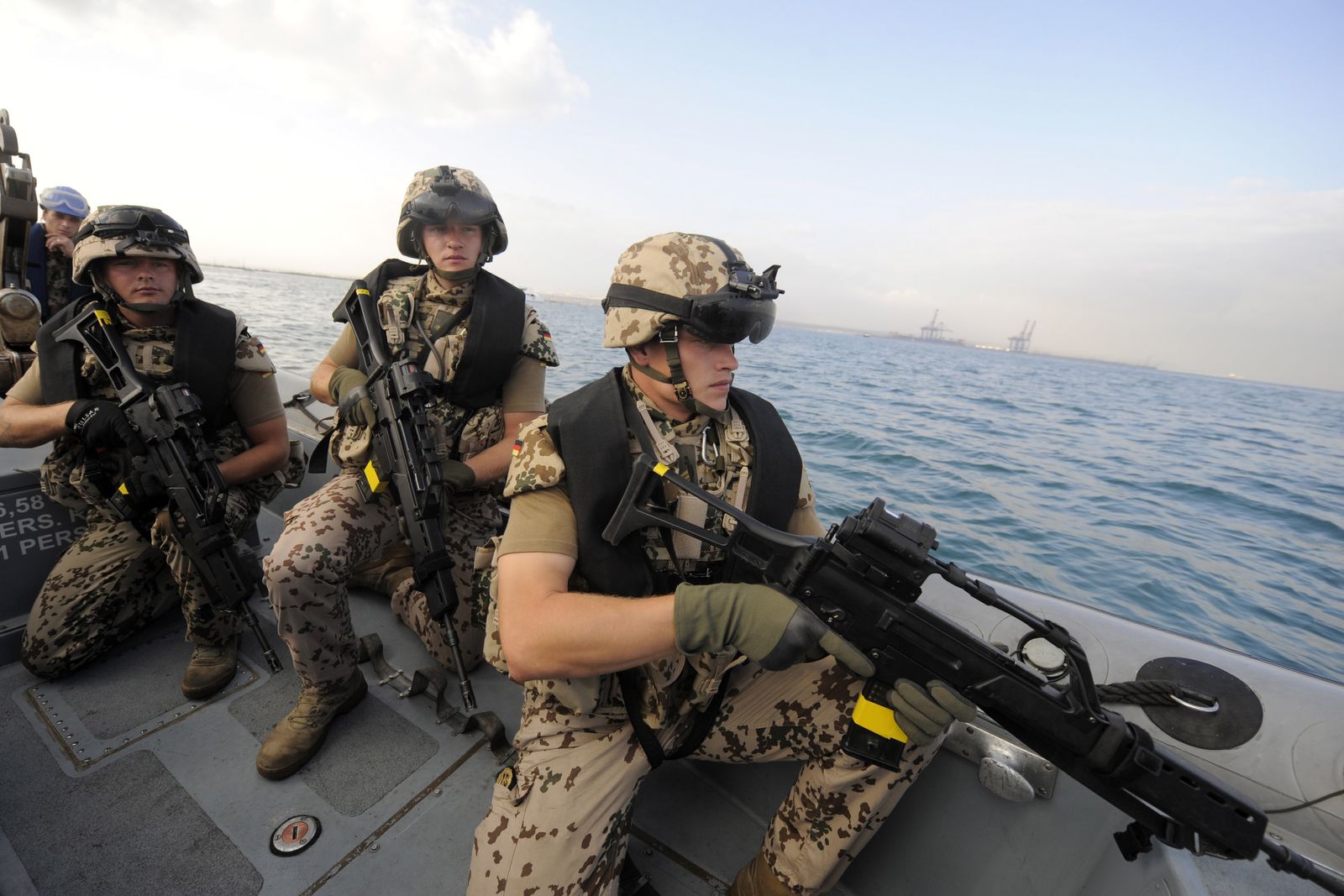 Bundeswehr soldiers practice an anti-piracy maneuver off the coast of Djibouti.